Symbian CEO Colly Myers is partial to his electric knife sharpener -- but he's built an operating system that could radically change your phone. 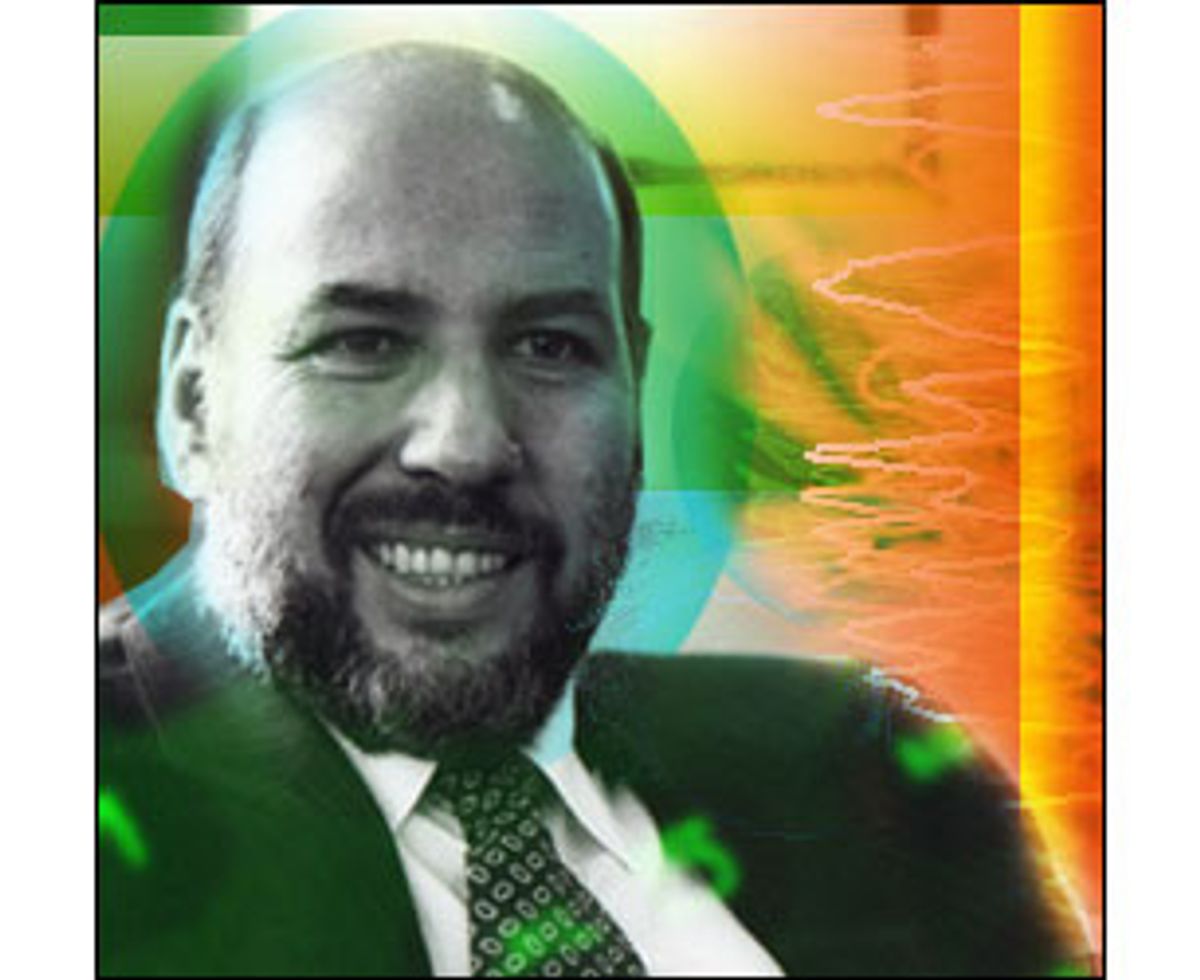 When Nicholas "Colly" Myers talks about Symbian, the company he leads, it's easy to get into a time warp muddle: The company sounds simultaneously fairly old and brand new. The reason is that although Symbian was only officially formed as a joint venture between Nokia, Ericsson, Motorola and Psion in 1998, its real origins date back to the forming of Psion's software division in 1981. Psion is a maker of personal digital assistants (PDAs) and modems, and Myers has been with the company since the beginning.

Symbian's product is a low-power, high-performance operating system called EPOC, originally designed for pocket computers. Eyeing the convergence between computing and mobile telephony, Symbian hopes EPOC will be the system of choice to power computer gadgets of all sizes and types, from smart phones to advanced wireless information devices. Elegant and lean, EPOC is so far primarily known through Psion's series 5 and 5mx PDAs. Because of that, people often think of Symbian as a competitor to Palm and other handhelds, such as Microsoft's just-released Pocket PC. But Symbian's strategy is really fixed firmly on the mobile phone market. EPOC-based mobile phones are expected to start appearing within a few months.

Americans are often astonished that someone buying a mobile phone in London can be assured that the phone will work in the remotest corner of Italy while his American counterpart is still trying to get through the fine print on roaming agreements. Because mobile phones are so popular -- by the end of 2000, there will be 30 million of them in the United Kingdom alone -- and because the Wireless Application Protocol (WAP) means that new phones can browse the Web and take advantage of specially tailored data services, many believe the wireless Web will quickly overtake the PC-based Web, at least in Europe.

Unfortunately, Europe and the United States have different, incompatible standards for mobile telephony. The current European digital standard, GSM (for Global System for Mobile Communications), is limited to 9600bps and 160 characters per message -- clearly inadequate for general Internet use. But GPRS (for General Packet Radio Services) is expected to change all that when it starts rolling out later this year. The difference is similar to that between traditional telephone networks and the Internet: circuit switching vs. packet switching. The result should be an explosion of mobile-phone-based Internet access.

There's a rumor among the British technical press that EPOC stands for "Electronic Piece of Cheese." Is that true?

Is it an advantage or disadvantage to be in Europe, far away from Silicon Valley?

Over the years, our greatest advantage is that we haven't been in Silicon Valley -- and also our greatest disadvantage. In terms of the resources and people we can get our hands on, it's fantastically useful to be where we are. In Silicon Valley, it's very difficult to recruit and run professional development at this stage. In the telecom world, Europe is ahead, and that's very valuable to us because we've been able to focus on the wireless industry and get a head start over the U.S.

Why is wireless so far ahead in Europe?

Partly cultural. GSM was set up from the cultural model of getting the benefit to the user instead of the person who supplied it. America's [model] is very much the O.K. Corral model of business -- we'll all go down to the O.K. Corral and start shooting each other, and whoever's left standing is the winner. This isn't very good in the communications world. You have to agree to cooperate on standards before you start shooting everybody. There's also the cultural issue of the caller pays. The whole non-U.S. world is unified on that issue, and everything else follows from it. On the other hand, Americans don't pay for local calls, which we do, so you have all these pagers in the U.S. ...

When commerce begins to drive change, I don't think the U.S. will stay behind. If you just look back to when we formed Symbian in June 1998, people really did not understand wireless. In just 20 months, that has changed so significantly. Many people in America get it now.

How did you get into the business?

I ultimately wanted to write operating systems and there aren't many places to do that -- the U.S. or the UK. I met David Potter [founder and chairman of Psion], who recognized the opportunities for microprocessors in 1979, and I helped him out with exports to South Africa for a while. Then we started to write software and it became clear I was better off writing software here in England with the company. Then we did the Organizer 1, the first handheld, and it's grown from there.

I don't know where I picked up the ambition, somewhere in South Africa, to write a 32-bit virtual operating system, [but] I eventually did that when we wrote EPOC.

If you achieved your lifelong ambition with EPOC, what's left?

To make Symbian successful as a company and as a standard. To do that, we have to enable this mass market. I think we've got the support for it. It's about delivery now.

It's odd: It seems like Symbian's been around a long time and yet as you say it isn't very old. It's had a lot of media attention.

Yes, because this is a very large market. And if we talk about the commerce thing, you'll have the device, that is, your phone and your data repository, and because we're getting packet services coming to the wireless world this year and next year growing very strongly, you'll be online all the time without having to make a call. You'll be a first-class network citizen, even better than most PCs in the home. You'll just be there. And although you'll get disconnected as you wander around, from time to time, you won't see that. We'll handle that transparently for you ...

As we go forward, what you'll find when you do shopping, when you want to buy something, rather than money, the natural device you'll use -- and now we're talking 2003, 2004 -- will be your phone, your wireless information device.

So the phone will have some kind of wallet built into it?

Yes, absolutely. And I think smart cards aren't going to make it for that reason. I think smart cards will eventually turn into these devices. They'll have authentication on them, so it will know who you are. That will be part of this multifaceted thing it does with you. It will do it by directly merchanting from your bank to the bank of whoever it is you choose.

That makes me very uneasy.

Why -- it's far less dangerous than it is today, because the security will be supreme. And that's what we've built into the platform. We have put all the underlying pieces of the puzzle in place: security, Java programming, enterprise connectivity with Oracle, IBM, Sun. That's what Symbian's been up to, putting all those pieces in place. We're not fully there yet -- as you know, it always takes a bit longer. But we've got all the parts ready to roll this out, as the market requires it.

I don't for a second pretend to understand how this market's going to play out. It's very complicated and it's very new. But I know the things that it will need, the technology that will have to be there. And that's what we've been putting in place, the platform to make that happen. So whatever is required, we will have the closest thing to get there. And that's what really differentiates us from the competition: We've been studying this market for a very long time and we understand it.

What happens to the phone companies' own operating systems?

They will carry on -- they're a major part of the market. By 2003, we hope to have an annual sell-in of 10 to 15 percent of the market and, over time, deepen our presence.

And EPOC will power everything from simple devices to complex ones?

We allow our licensees to define the whole product line. All our products ship with standard programmers' development kits; all our devices are programmable. That's the biggest difference between advanced clients [such as PDAs with computing abilities] and thin clients [such as a standard mobile phone]. The result is that you get a much better user experience with a programmable device. That's really the key issue: Users go for the better experience, something we call "enchantment."

What is the killer thing that will make people buy your products?

How do you handle competition from people like Palm and Microsoft?

It's a mistake to see us as competing with others in the handheld market. We started working on our operating system in 1993, aiming at 2001. You have to aim into the future. The problem is if you don't aim far enough -- and that's Palm's problem -- you end up behind.

But people love the Palm.

Two million people love it. We're talking about hundreds of millions of people. Two million units is nothing in the bit of the market we're addressing. [Editors' note: Palm Inc. reports that it now has more than 6 million users.] These are huge companies with huge channels. Nokia is shipping 3 million phones a week.

What's your own favorite gadget?

A knife sharpener. I do a lot of cooking, and this sharpener has three sets of Vs and absolutely sharpens the knife to an unbelievable edge, and makes cutting a joy.

And then I love ... the best gadget, I think, is all forms of computers ... I am definitely in the computer business. I've been writing software for 24 years. I came from a mathematical background, so all these things like phones, DVD players, I think they're all great. The things I don't like today are things like PCs, where you don't get a great experience.

Microsoft has done a great job in leading to market -- I often call them the eighth wonder of the world -- but Microsoft doesn't understand consumers. It's done what it's done through the business market, and then flocked into the consumer world, and consumers don't have a choice.

So when can I have what is, to me, the perfect device -- that I can type on, and do telnet, and get e-mail, and maybe browse the Web a bit, and have it work in both the United States and the United Kingdom?

I've wanted a mobile phone that would work in the United States, nationwide, since 1978.

Predicting technology is easy; knowing when: That's the key to it.