Eclipse of an urban dot-com dream 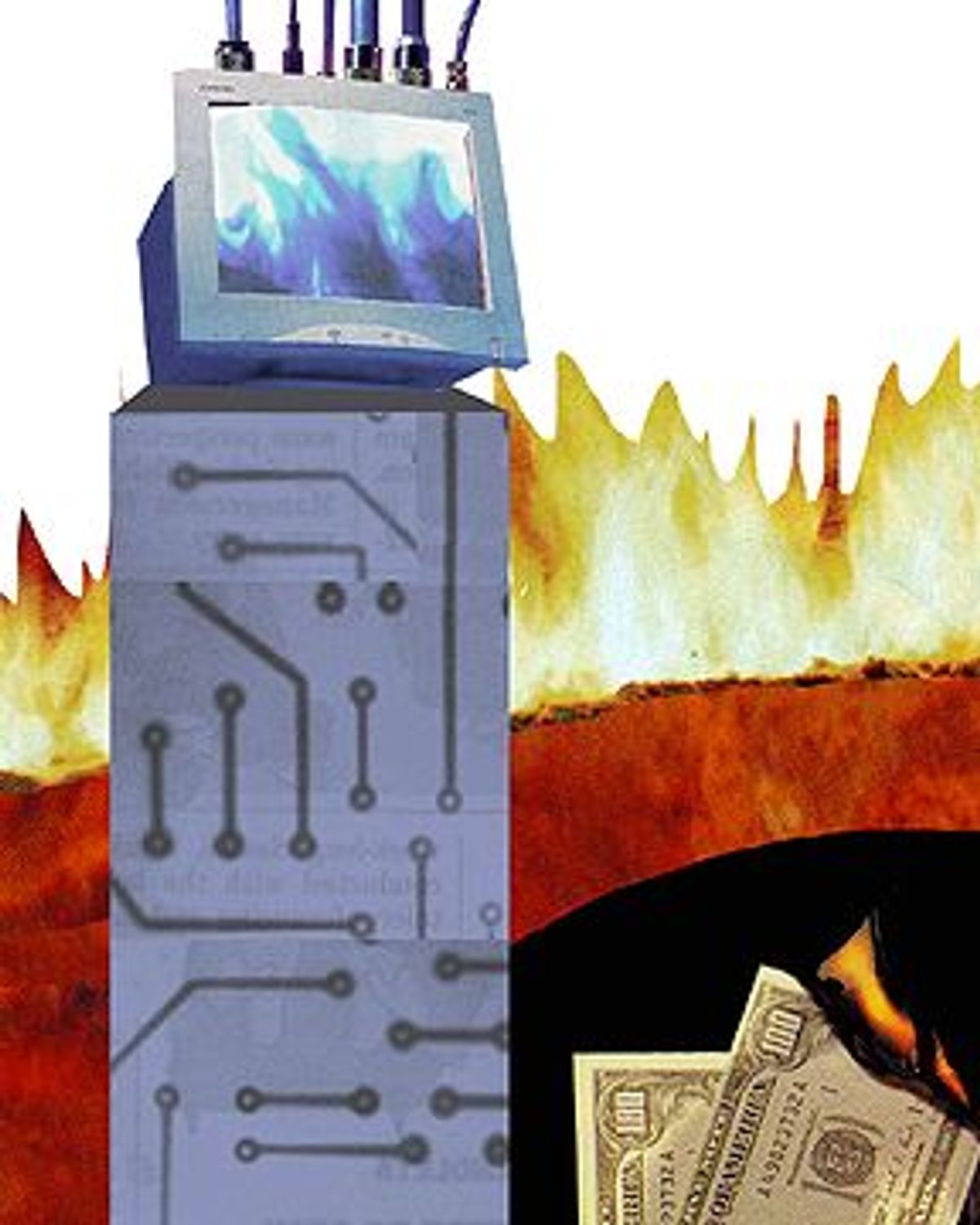 When I first began working at Urban Box Office Network (UBO) a year ago, I thought I had made it to the promised land -- you know, Martin Luther King Jr.'s proverbial mountaintop? Like everyone else, I was caught up in the hype. The Internet industry was allowing young, white entrepreneurs to retire at 30 with huge IPO payoffs, and everyone wanted in on the action.

In the early days of the Net revolution, start-ups targeting African-Americans struggled for financial support. Few believed urban Web sites ever would attract large enough audiences to reap profits. But with predictions that America's increasingly multicultural population eventually would take to the Web, several start-ups, including UBO, arrived on the scene. Suddenly, there was demand for culture with a black flavor, and the venture capitalists came trolling.

Millions of this investment money financed the startup of UBO -- a place where we employees, swanked out in extra-cool urban gear, feigned importance chatting on cellphones while chaos swirled around us. Even so, excitement abounded at the notion of black people in charge on the Net. This was our chance at an equal payoff.

UBO first hit my radar in the summer of 1999. The buzz in New York's urban art scene was that it was an Internet venture poised to tap into an underexploited market. UBO would offer content sites about everything urban, from Latin culture to animation and hip-hop to hair. Word on the street was that the company was looking for creative people, and best of all, they were willing to pay.

Even though I was skeptical, I sent my risumi. I'd been searching for a creative, new opportunity and I had Web experience. After five years working in a white corporate setting, I was ready for a change.

Walking into UBO's warehouse space, I was struck by the sea of young, beautiful, hip and artistic people of color. The aesthetic was right out of MTV's "The Real World," with big, open rooms, fold-up furniture and lots of overhead noise. It was a setting that I could be excited about as a young black woman, a vision of multicultural America. It was also Motown meets Downtown fabulous. What's more, people seemed happy to be at UBO. They were invested in what they were doing, and they promoted the company as if it were their own.

It didn't matter if you had Internet experience. One content producer admitted he hadn't used e-mail before starting his job. But it didn't matter because the company's leadership, under the direction of urban entertainment mogul George Jackson, believed troops could be trained to be the Web gurus of tomorrow. Despite some reservations, I took the job that day and even promised that I could start immediately. UBO seemed brilliant and exciting, and I wanted to be part of the movement.

Jackson and his business partners initially wanted to start a cable company, but they moved into the Internet arena after meeting Arzie Hardin, who had been writing a business plan for an online artist community called IndiePlanet. Hardin envisioned the project as a Web portal with different channels devoted to various genres of art. The site eventually became Jackson's blueprint for UBO and a showcase for investors who wanted to see what they could expect from the company, which went on to acquire several hot -- and not so hot -- properties, including Latinflava.com, Soul Purpose, Support Online, Hiphop.com, Urban Music Matrix, UBO Sports and Womanhood.

I was one of the first employees hired to develop content for UBO. During the time I was there -- nearly a year -- the company grew from 50 employees to 250 employees, then shrank again. (A UBO executive says the company has about 350 employees today.) Because of the initial rapid expansion, the company seemed powerful and flush with resources, if somewhat cramped for space.

Plus, we had the charismatic Jackson as our inspirational voice. On his birthday, all 250 employees gathered around gargantuan cakes and he relayed how, as a young boy, he never thought he would see his 42nd birthday. In a sad twist, he died in February 2000, less than a month after that speech. He had a stroke and fell into a coma in a cab on his way home from UBO's headquarters.

His death signaled the end of something larger, because he was the true visionary behind UBO. He understood the creative process and how to bring disparate ideas and people together. He also possessed great enthusiasm for the urban marketplace and made his staff believe we were working for something greater and more important than just money, power and fame.

With Jackson gone, things began going downhill, maybe because the business never came together in the first place. IndiePlanet's launch had first been set for September 1999, but kept getting pushed back. Five proposed launch dates passed, and the chief reason the site finally arrived in February 2000 was that the New York Times had run an article announcing its imminent launch. To save face with investors, the site was pushed into cyberspace without functional technology.

After an extravagant, $100,000 launch party -- after which performers were not paid for several months -- cracks in the company's business model widened and morale suffered. To add to the woes, IndiePlanet's centerpiece -- a weekly video profile showcasing new, underground talent -- didn't work. The technology required to webcast the videos was faulty, so viewing the video was hit-or-miss -- mostly miss.

Overall, our network system was a joke. Computers blitzed out daily and so did e-mail. On March 9, to commemorate the 1997 death of rapper Biggie Smalls, an employee sent around several large audio files of the Notorious one; that crashed the system for two days. And one afternoon, while I was on deadline, a tech intern came over to install new software on my computer. I asked if it was absolutely necessary, and he assured me it would only take a minute. Twenty minutes later, I noticed the baffled, guilt-ridden expression on the intern's face and my stomach sank. It seems he had been dispensed to do a task he wasn't properly trained for and crashed my computer. I went home early that day -- 8 p.m.

I knew something was terribly unwell with our little empire. Others knew too. One by one, my colleagues started handing in multipage resignation letters, describing why they found it odious to work for such a mismanaged company. Morale dipped lower and lower. It didn't help that, I found, the site's management often treated female employees with disrespect. (One woman -- a quiet and hardworking editor -- was told her facial expressions were bringing down the morale of her co-workers.)

Whenever there were firings -- which happened frequently to make up for the initial overhiring -- we were treated to elaborate company outings where employees blew off steam by consuming too much alcohol. The outings didn't quell the growing concern from employees that their jobs would be the next to go.

Back in the early days of my time at UBO, last fall, when the men in casual suits and Prada slip-ons toured our disorganized office space, hope had abounded in the chaos. The investors seemed to like what they saw; dazzled by the "urban realness" of it all, they eagerly wrote the checks that floated UBO's ambitions. Each round of financing buoyed our hopes. But the industry was moving at warp speed, and the initial excitement of the first big Internet start-ups for the urban market was already waning.

UBO has not lacked the resources to realize its goal. And it has not lack talent, although its employees may have been underutilized and mistreated. I peg its problems to Cadillac Syndrome -- you know, the guy who buys a Cadillac before he has a house or food.

UBO's architects got starry-eyed from the cash at their disposal and lost track of the big picture that George Jackson first envisioned. Their failure to live up to that initial vision -- and the difficulties similar sites have faced -- has nothing to do with the viability of the urban demographic but, rather, with the failure to mobilize to reach this demographic. And that's a damn shame.

Note: This story has been revised and corrected since its original publication.

Nasoan Sheftel-Gomes is a San-Francisco writer who used to work as a content producer at Urban Box Office Network.