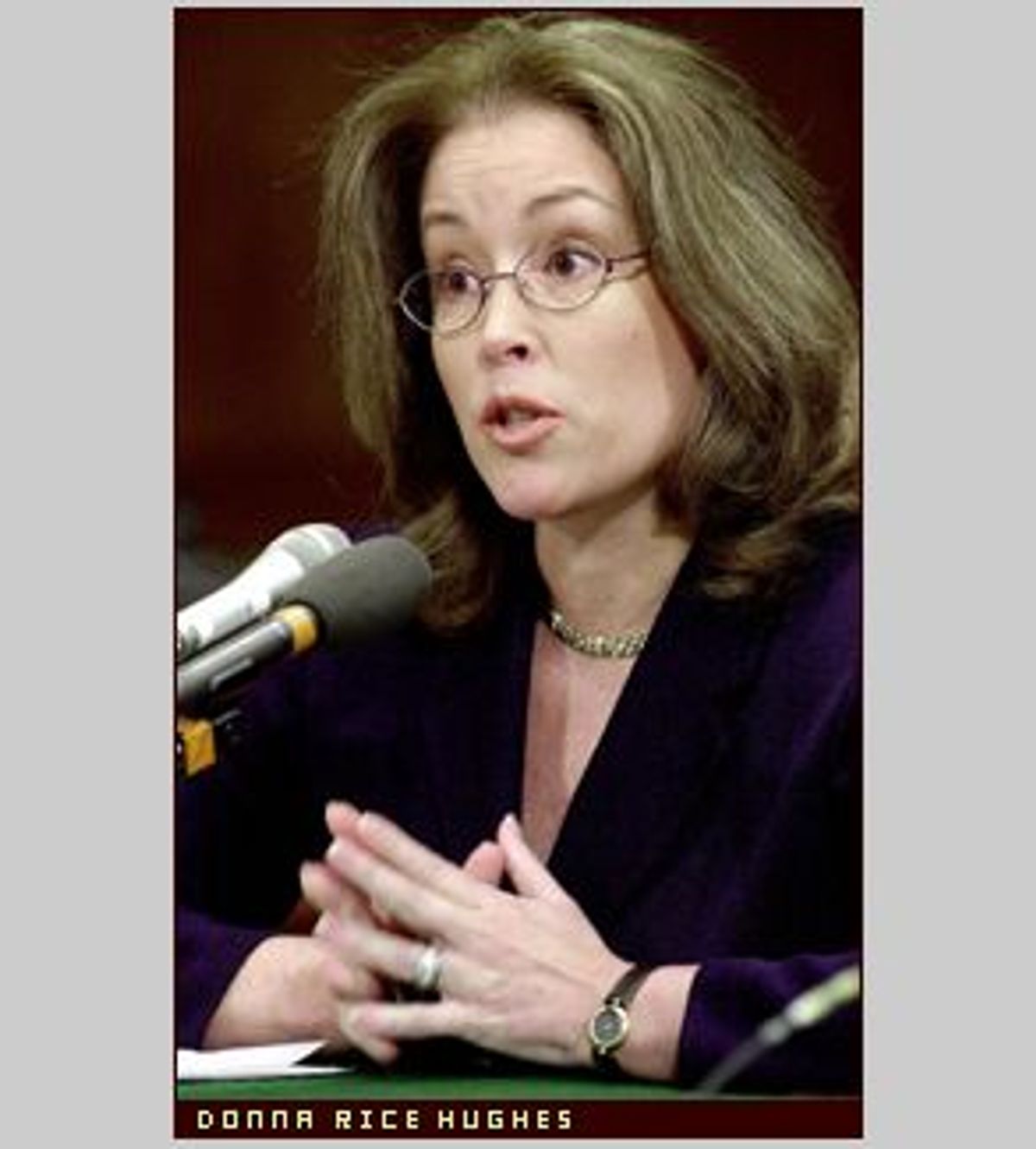 Photographs of Donna Rice Hughes in the company of Colorado's then Sen. Gary Hart -- including one of her sitting on his lap aboard a boat named "Monkey Business" -- launched a media frenzy about the nature of their relationship. The scandal ultimately proved toxic to Hart's presidential quest.

Green recently spoke with Hughes, who's now a consultant for FamilyClick, an Internet service provider that filters what it considers offensive and inappropriate. An easygoing person who laughs a lot, Hughes comes across as someone who's come to terms with the reason behind her fame but isn't trying to capitalize on it.

You've become an advocate for children's online safety, and lobbied Congress to pass the Communications Decency Act in 1995. How did you became interested in this area?

Within a few weeks of joining the staff of Enough Is Enough, I began to track a pornographer who was operating a very lucrative bulletin board service. The pornography he was marketing was prosecutable as obscenity. It was material that an adult wouldn't be able to find in an X-rated bookstore. This pornographer and others, as well as collectors of this type of pornography, were using Usenet to barter and trade and sell material. I told my boss that if this continues, and it migrates to the Web, we're going to have a problem in that material that adults can't even get on the seedy side of town at a pornographic bookstore, children will be able to get for free with a couple of mouse clicks, and I want to work on this.

How did you come to write "Kids Online"?

I was approached by the publisher.

Yeah, it was. Oddly enough, I was almost finished writing it when I was approached by another publisher to write a similar book. Of course, they didn't know that I was already writing this book. There are a number of books on this subject, but I suppose the visibility that I've had and the way I've tried to position this issue was unique -- at least the publisher thought it was unique enough to turn it into a book.

Do you get paid for being on the Commission on Child Online Protection?

Oh, no. It's a tremendous amount of public service -- many of us joke about not having time for our day jobs. It's a congressional appointment and a wonderful privilege. There's a lot of work to be done. Interestingly enough, talking about money, we're all scratching our heads as to how the commission didn't receive any funding from Congress.

Do you earn a lot from making speeches?

Well, I'm not a professional speaker. It varies from nothing to about $2,000 -- which is probably the most I've ever accepted, but that's not the norm. If it's something I feel strongly enough about, money is not the issue. But if somebody wanted to pay me a lot of money, that would be great.

Let's talk about money. Do you manage your portfolio?

No. I've always had a stockbroker. I'm not very hands-on. I haven't really had the time or the interest to become an expert, and I'm just one of these people whose focus is so much on my work and my family.

Do you own mostly mutual funds or individual stocks and bonds?

Mutual funds, though I don't know the names of them offhand. I trust my broker -- and I put a lot of confidence in him. He's done very well so far.

How long have you been working with him?

A couple of years.

Do you have any accounts at a discount brokerage? Even $2,000 of play money?

No. My broker just went from Merrill Lynch to Salomon Smith Barney and because I trust him, I've switched everything over. They've got me in the IPO program -- that's a wonderful privilege, and it's done very well.

It's hard to say. I'm so conservative that I don't usually make bad decisions. There was some stock -- I can't even remember the name of it now -- that someone recommended about 15 years ago. At some point, I had to make a decision about converting my shares when the company went from public back to private. I converted my shares, but then I couldn't get my money out, and I've never been able to. With interest and everything, it's probably about $8,000 or $9,000 now. I had to hire an attorney and put a lien against the company. I don't expect to ever get that money back.

Do you ever think, I should have bought XYZ stock?

I was working closely with America Online in 1994. I later thought, I knew all these people. Why didn't I even think about buying the stock at that point? At that time, I didn't have a lot extra to play with. But that's one of the ones I kick myself on. Friends went to work for Cisco Systems before anybody had heard of Cisco, and of course they're multimillionaires and they were secretaries.

I can't think of anything specifically. My stockbroker could probably tell me what's doing well. I've had a broker since I was 29.

That's pretty young. Were you setting up retirement accounts?

Oh, yeah. I've been saving money since I was a kid. I had savings coming out of college and had savings all through my 20s, and obviously have savings now, so I've worked with brokers. I look at my broker not just as somebody who can give stock information, but as somebody to manage the account. He suggested I hire a money manager, which I will probably do later this year. My father never had any debt aside from the house, and that's the way that I live. Of course, his house has been paid off ever since I can remember. He paid cash for everything. His philosophy was that if he didn't have the money for it, he didn't buy it. That's my philosophy as well -- one of the best ways to make money is to save it. When the markets do well and your accounts do well, then that's wonderful. My goal is to continue to sock a little bit away every month.

Did your parents agree on money matters?

To some degree. My mother accused him of being very tight with the money, which he probably was. My father was a civil engineer. He worked for the Federal Highway Administration and he's invested well and saved his money. Now he's worth a lot. There were two daughters; my sister is very much like me. She's probably even more conservative than me in some ways. We're both savers -- it's not a philosophy adopted by a lot of people.

What happened to your work life after the Gary Hart scandal broke?

My world turned upside down in a matter of minutes. I was a marketing representative for a pharmaceutical company in South Florida and I was appearing in television commercials, usually about 10 to 15 a year. I wasn't able to continue either of those. It was hard. I had to resign from my marketing job.

Did they ask you to?

No. It was the intensity of living through the scandal, and I was really center stage for about a year and a half, even though I didn't cooperate with the media. I wasn't left alone -- reporters followed me around, and my phone rang off the hook. I had to resign. Also, my television commercials were all canceled, so all my residual income from commercials stopped. It was a difficult time.

Was it hard to sort through the offers?

Posing nude or doing some sort of tabloid story -- those were easy to walk away from. I was offered hundreds of thousands of dollars initially and eventually millions of dollars just to tell my story. Again, I said no. The final decision was the Playboy offer: a Q&A, no pictures, for any amount of money, starting at $1 million. At that point -- I had told them no over and over again -- I said, 'No. It doesn't matter. You cannot buy me. I am not going to give you an interview. Period.' That was the end of that. And then I went underground for about seven years.

Did you earn much from the No Excuses ads?

Not an extraordinary amount; in fact, it was quite small. I was a commercial actor and it was the only thing I felt comfortable saying yes to -- as long as it wasn't an endorsement. I didn't understand at the time that I just couldn't do that -- I was too exploited, I was too recognizable. The media picked it up, and we hadn't even shot the commercials! Of course, it's the one thing I've never lived down. Talk about one of your poor business decisions.

Oh, yeah. They were great jeans.

Does it bother you that there are pictures of you on the Web that you probably wouldn't want people to see?

When the pictures first came out, they were on the covers of major magazines and newspapers. I was absolutely devastated. They were usually pictures that were reject modeling shots -- not all of them, but the majority were shots that I wouldn't even have had in my portfolio. But I'm over it now.