"The Curse of the Jade Scorpion"

Woody Allen's newest movie is a pinched affair, with every joke quashed. And would Elizabeth Berkeley really fall for him? 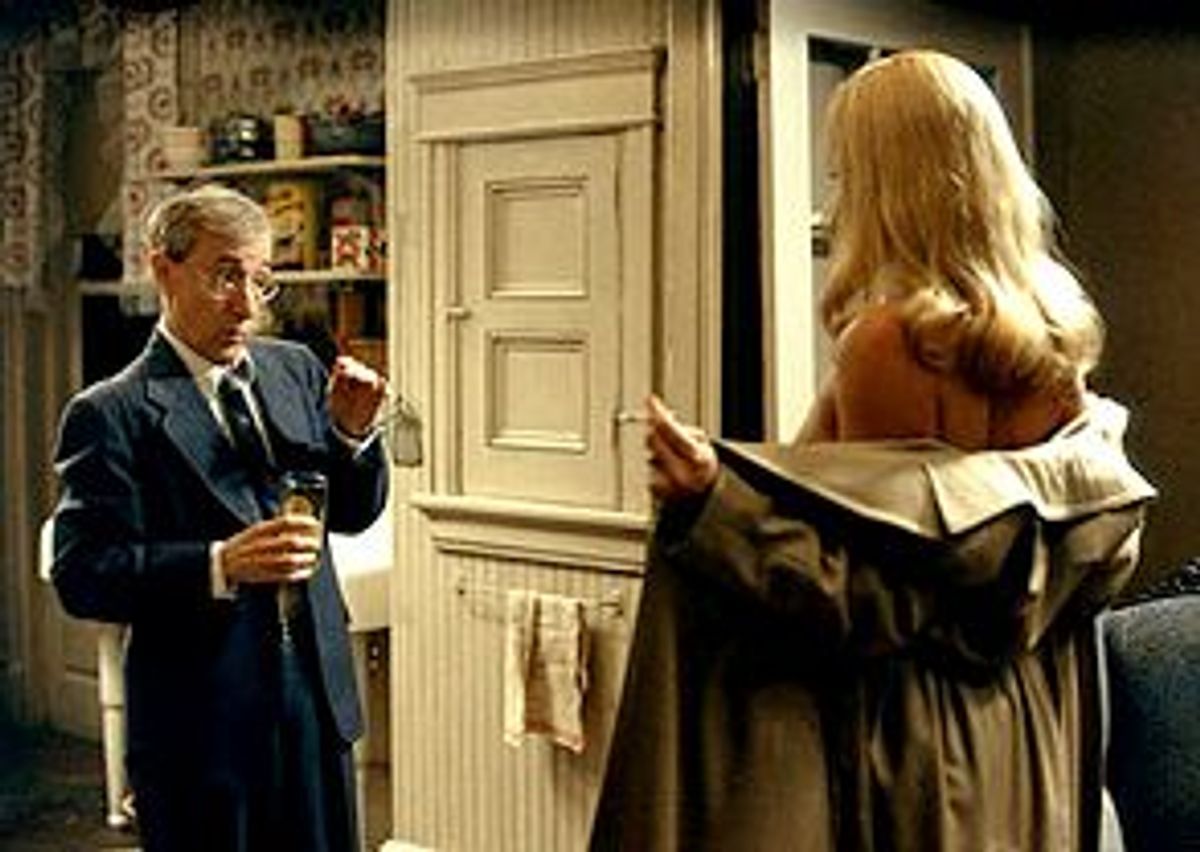 If there's any reason left to feel fondly toward Woody Allen, it's because, after years of betraying his talent with pallid imitations of Bergman and Fellini, after all the highly praised drab and moralizing stinkers like "Crimes and Misdemeanors," even after all this, he still dreams of being Bob Hope.

Allen has made no secret of his admiration for Hope or of Hope's influence on him. In his nervier comic moments, you could see Allen trying on Hope's persona, the coward on the make who puts on a show of brash bravado. That was the character Hope perfected in his movies of the '40s and '50s, the series of "Road" pictures he made with Bing Crosby, and others like "My Favorite Brunette" and "Son of Paleface." (I still laugh whenever I think of Hope as a baby photographer, replete with beret, smock, and floppy bow tie, in "My Favorite Brunette," having his hand chomped by a Chinese toddler he's been kitchy-kooing. Turning to the boy's mother, Hope asks, "Don't you feed him meat at home? Happy little gourmet!")

Those movies were, at best, casually made and the casualness was what made them funny. Nothing, not the minimal production values nor the minimal plots, got in the way of the laughs. The plots were deliberately disposable, giving the performers plenty of room to clown around.

Allen's new picture, "The Curse of the Jade Scorpion," is nothing but plot and production values, and there's barely a laugh in it that isn't quashed. The problem isn't that the story -- an ace insurance investigator (Allen) becomes hypnotized by a nefarious magician (David Ogden Stiers) and becomes a jewel thief doing his master's bidding -- is silly. It's meant to be silly. It's that Allen sticks to it. At one time, back in the days of "Take the Money and Run" or "Sleeper," he understood how to use a premise as an excuse for gags. But he has become far too meticulous a filmmaker for casual throwaway comedy.

That's a worse problem than the bum timing and lame jokes. There's no sense of play in "The Curse of the Jade Scorpion," no sense of the actors' cutting loose to amuse themselves or us. The whole movie gives off the glum, deadening feel of people working at having a good time, wanting to be rewarded merely because they're attempting a '40s comedy. It isn't that the sweat shows -- Woody Allen makes movies too refined for sweat; it's more like any sense of natural interplay has been expunged. Even when Allen and Helen Hunt, as the office manager he's at war with, begin yelling at each other, there's no sense of their getting caught up in the heat of the scene. It's a tightly controlled display of temper.

The movie might be a museum exhibit of '40s New York interiors, or a series of retro settings cooked up for a special feature in "Architectural Digest." During one scene, when Allen is consulting with a co-worker in his office, I found my eyes drifting to the polished glow coming off the antique oak filing cabinet. Designed to mummification by Santo Loquasto and shot by Zhao Fei in plummy browns and golds, "The Curse of the Jade Scorpion" looks too rich, too burnished for comedy.

Even the crummy apartment where Allen's character lives with its tiny service kitchen and floral patterned wallpaper that has seen better days is sumptuously crummy. You can't settle into the movie and start laughing because you're aware of all the work that has gone into creating the period look. The look and sets of the movies Allen is aping weren't exactly ugly. They were serviceable. These settings are handsome and high-toned and, in their dogged determination to be charming throwbacks, oppressive. They crush the life out of any inclination toward high spirits.

Comedy needs discipline, and Allen is famous for the control he exerts in every stage of production. But when it comes to directing and acting comedy, discipline should incorporate the possibility of freedom; it's not the same as rigidity.

Allen surrounds himself with contemporary actors who are the equivalent of the character actors who populated '30s and '40s comedies, the type of eccentrics who made you feel you had landed in a cuckoo universe, and then gives them nothing to do. It's fun trying to match up these actors with counterparts from the past. As the married boss whom Hunt is sleeping with, Dan Aykroyd has some of the hearty bulk of the character actor Jack Carson (though without the air of buffoonery), but he doesn't get to play the exasperation or the opaque self-satisfaction you might expect from a comic boss. As the office's amateur magician, Wallace Shawn at least has a few moments, proudly demonstrating a card trick or proving to be a whiz at hypnosis, but then Shawn can always reduce an audience to laughter with an arched eyebrow or that great sideways smirk of his. (Given his longtime partnership with Andre Gregory, who could be this era's Edward Everett Horton, it's a wonder no one has leaped at the chance to pair them in comedy. They're born vaudevillians.)

You wish these actors, and David Ogden Stiers, who, as he showed on "M*A*S*H," has a flair for comic pomposity, had more to do, not least because they'd take your attention away from the leads. In her pageboy and tight skirts and sweaters, Helen Hunt has been made to look the essence of a '40s career woman, and the role Allen has written for her, all brittle haughtiness and wisecracks, is a try for the style Rosalind Russell showed in "His Girl Friday." But she holds herself at a distance from the movie and her costars, and there's no delight in her bitchiness, no softening even when, under hypnosis, she's declaring her love for Allen (the way she softened in her final scene with Tom Hanks in "Cast Away").

Part of the problem is that what's meant to pass for wisecracks are just school-kid insults: She's always wishing heart attacks and strokes and accidents on Allen. I kept waiting for the movie to make a joke of the way her attempts to be smart-alecky keep falling short, but Allen really seems to find her limp zingers funny. Even on "Mad About You," Hunt's brand of humor was often self-satisfied and sarcastic. There, though, she allowed herself to be the butt of the joke. Here, she acts as if she's too important to let herself be laughed at. It's one of the most unlikable lead performances in memory.

Then again, you can hardly blame Hunt for wanting to hold herself aloof from Woody Allen. I don't automatically object to the pairing of younger women and older men; it all depends on whether there's any chemistry in the pairing. But isn't it time for Woody Allen to stop casting himself as irresistible to every younger woman he shares the screen with? In "The Curse of the Jade Scorpion" Allen dates Elizabeth Berkeley (who, with her big eyes, is the only cast member who looks authentically '40s and the only one who seems fully alive), is propositioned by Charlize Theron (made up to look like Veronica Lake but doing a variation on Martha Vickers' nympho little sister in "The Big Sleep"), and then has Helen Hunt fall madly in love with him. Part of the joke of Theron's attraction to Allen is that she finds him repulsive, but their scenes together still play more like his fantasy. (Especially since she's so tall she looks like she could just flick her finger and knock him to Cleveland.)

I would like to see more middle-aged male and female romantic leads in the movies. Alan Alda showed leading-man romantic charm in "Manhattan Murder Mystery" (the best of Allen's recent movies, a graceful comedy about middle-age compromise), and Tom Selleck had real comic style in "In & Out" and "The Love Letter," where he also displayed a touching, understated sweetness. But Woody Allen was always a likable schnook. And for some time now, he has stopped making a joke of his sexual attractiveness and started taking it seriously. This is a word I rarely use, but watching Charlize Theron pant to get him in the sack is unseemly -- it's like watching Kim Novak proposition Ned Glass.