Despite the all-star cast of beautiful, talented actresses, this French whodunit never lives up to the grand musicals it rips off. 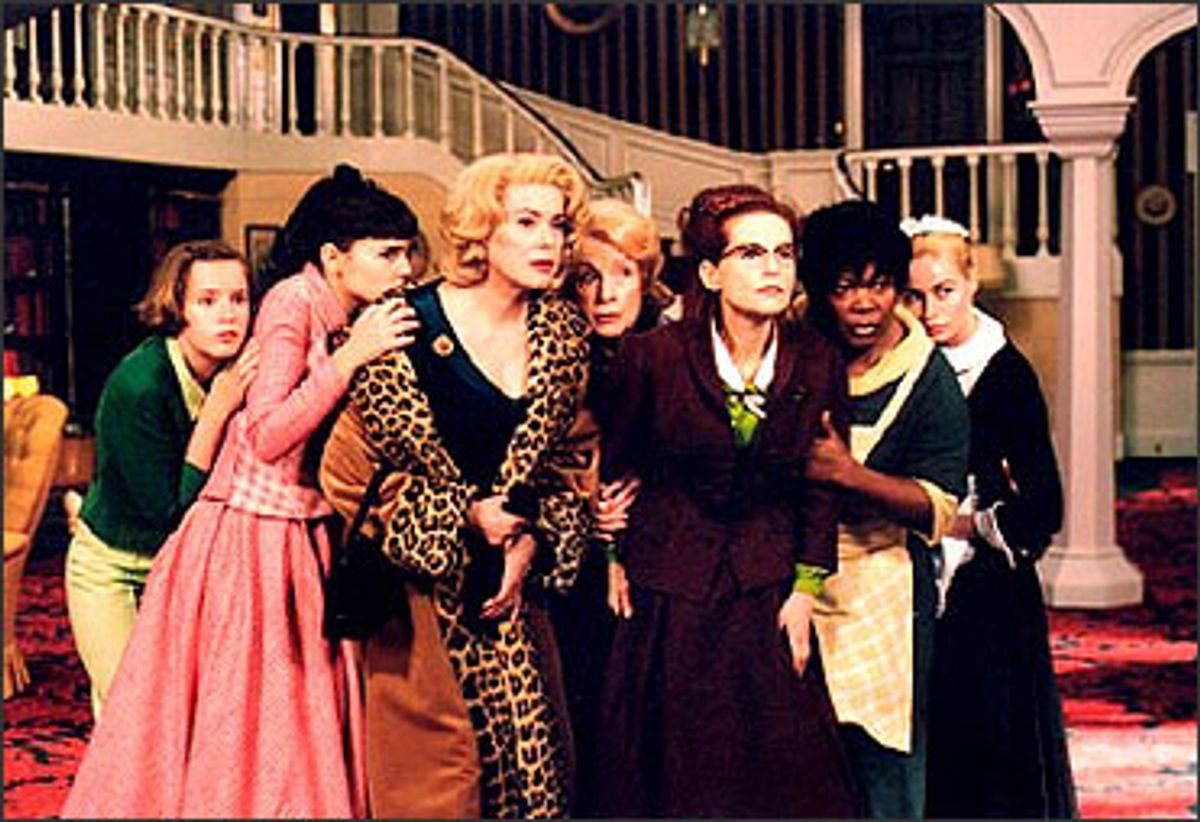 Movies can make excellent love letters. For every filmmaker who ever lazily ripped off, say, Alfred Hitchcock or the MGM musicals of the '50s, there are many more who blossom when they're riffing on the types of pictures they love best.

Here's the bad news: François Ozon, whose previous films include last year's "Under the Sand," isn't the second type. His latest picture, "8 Women," is a mannered Agatha Christie-style whodunit musical rendered as a tribute to Jacques Demy and Douglas Sirk. Never mind that casting those three sensibilities as bedfellows is likely to make for a lot of bumps, bruises and broken bones in the morning (exactly what kind of bed would be big enough for all three of them, anyway?). Ozon may have Christie's penchant for working everything out in one neat, braided strand at the end, which is great if that's your kind of thing. But he has neither the heart nor the soul of Demy nor the brittle, overdramatized intensity of Sirk (who, as director of pictures like the 1956 "Written on the Wind" and the 1959 "Imitation of Life" brought melodrama to new heights) and not even his overstimulated color sense can make up for that lack.

Unlike both Sirk and Demy, he's less interested in emotion than in evoking in his audience a safe, desiccated facsimile of it: We're invited to laugh knowingly at Ozon's clever references and allow our mouths to form an astonished "O" at the "shocking" surprise ending, but in the end we can walk out feeling bigger than all of it -- the movie demands nothing of us beyond our own self-congratulation that we know better than to take it seriously. Under the pretense of casting a spell of wonder, mystery, joy and despair, all Ozon has really done is set up a dry, lifeless environment in which ironic detachment -- the arch-enemy of all great art -- can flourish like a stingy cactus.

The lifelessness of "8 Women" seems almost devious when you consider the dazzling (and alluring) star power behind it. The cast of French actresses includes famous and marvelous ones (Catherine Deneuve, Danielle Darrieux), famous and overrated ones (Isabelle Huppert, Fanny Ardant) and almost-famous and as-yet-untested ones (Virginie Ledoyen). The story, adapted from a 1960s crime play by Robert Thomas and set during a snowstorm in a remote French country mansion in the '50s, involves a house full of women who are drawn together -- and wrenched apart -- by a sudden murder: A man is found stabbed to death in his bed, and the movie's intricate machinations are supposed to get our wheels grinding as we figure out exactly who might have done it. Could it be the man's wife, the frosty, fur-clad Catherine Deneuve? His ex-showgirl sister, Fanny Ardant? His perky, pony-tailed teenage daughter, Virginie Ledoyen? Or the comely maidservant, Emmanuelle Béart?

Then again, it could also have been the family's beloved longtime housekeeper (Firmine Richard), or the man's tomboyish younger daughter (Ludivine Sagnier), or his wheelchair-bound mother-in-law (Danielle Darrieux), or his tweedy, bespectacled spinster sister-in-law (Isabelle Huppert). Aside from the fact that so many of these actresses are so famous, it's easy to keep the characters apart by their costumes alone: Who needs distinct characters when you can just assign each one a special outfit? Ardant wears an asymmetrically buttoned red dress that she's fairly popping out of; Ledoyen flounces about in cartoon-colored circle skirts; Béart accessorizes her pillowy lips with black lace-up boots -- a kinky touch to her intentionally surreal maid's outfit.

Ozon is visually astute: In the movie's first 10 minutes I was dazzled by the way he cleverly (and effectively) mimics Technicolor. But it wasn't long before the flatness of the action (not to mention the feeling) I was seeing on-screen began to tug at my perception of all those cherry reds, lapis blues and daffodil yellows. Color ceased to matter in the midst of so many actresses delivering their lines, zombielike, in the service of this smugly self-assured campfest.

Sure, we're supposed to laugh when Deneuve and Ardant, whose characters have lived for years as wary mortal enemies, wrestle each other to the floor in an attempt to gain control of a loaded handgun, only to start desperately kissing and caressing each other. "Ze line between hatred and l'amour ees very theen!" is the message the scene silently intones, twirling its fake Frenchy mustache. But the moment has no resonance -- it's merely an arched-eyebrow art-house gag, an invitation to giggle at how overwrought and silly old movie conventions can be. Ozon thinks he's paying homage to the heightened, overstimulated drama of Sirk. But overwrought as Sirk can be, his best work plumbs stylized yet deeply felt extremes of emotion -- it's not just mannered phoniness. Ozon grabs for the look and effect of Sirk without bothering to dig into its meaning.

The picture is intentionally stagy -- Ozon clearly wants it to have the feel of a filmed play. But he takes that as a license to allow the action to be stiff and hokey, and he seems to have encouraged the actresses to flounce and pout and emote with abandon. Ozon's fans have exclaimed over how much he loves these actresses. But what shows up on-screen is less like love than a kind of avant-garde puppetry. None of these actresses -- not even Deneuve and Darrieux, whom I'd walk a mile in the rain to see -- is any good.

Ardant and Huppert in particular munch the gaudy scenery as if it were made of lettuce leaves: Ardant, a one-woman battleship in that red dress, is stuck in a universe where she desperately believes she's a cross between Ava Gardner and Rita Hayworth but is barely half as appealing as either. And Huppert layers her crazy nervous twitches so thickly that she wears us down. The sight of her chattering neurotically, her glasses askew, her hair twisted into Björk nublets, is almost too much to bear: No one needs an amphetamine-addled French Lisa Lubner.

Worst of all, as hard as Ozon tries, he can't inject any joy or pleasure into the musical numbers. They're static and inert, and almost all the actresses deliver them as if they had just awakened from some sub-Arctic deep-freeze. Ozon may have been inspired by the Technicolor dreaminess of Demy's "The Umbrellas of Cherbourg" and "The Young Girls of Rochefort," but he doesn't understand that Demy's absolute sincerity is what makes those musicals work. Ozon is too tasteful to attempt Demy's go-for-broke emotional richness, which is probably why the movie's songs feel plunked into its landscape instead of blended into it.

But then, how can any song seem suitably integrated when the whole movie is a novelty number, an excuse for all manner of mincing histrionics? "8 Women" is ostensibly filled with love -- for music, for actresses, for some very revered movie traditions. But if that love is actually there, it sits on the screen in the flattest way imaginable, and the brightest colors in the world can't make up for all that's missing. "8 Women" is perfumed kitsch, and it reeks.