Will "The West Wing" go south?

After this year's ratings slide and the departure of creator Aaron Sorkin, NBC's long-running White House drama is headed for major changes. That's not necessarily a bad thing. 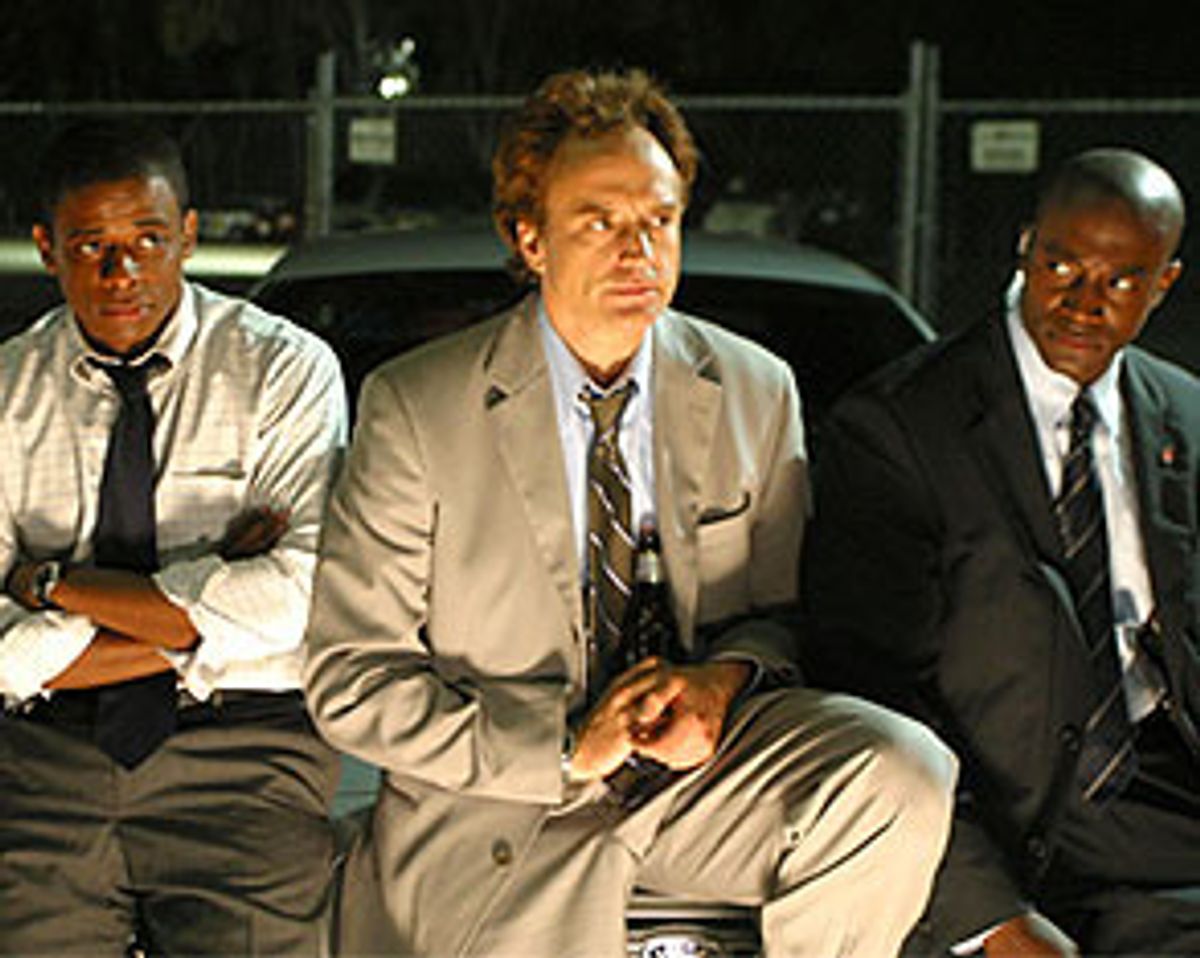 What happens when a master chef leaves his four-star restaurant to highly trained associates who, although just as experienced, may not share his unique talents in the kitchen?

That question is at the heart of "The West Wing's" future. On May 1, creator Aaron Sorkin announced that he and director Tommy Schlamme are leaving the show after an unexpectedly tumultuous season. Fans can't help wondering if their favorite Wednesday night fare will taste just as good next fall, with a new cook whipping up the wonkish banter and moral one-upmanship that regulars have come to know and love.

While President Jed Bartlet and his ethically irreproachable minions are raked over the coals with clocklike regularity, the staff and crew of "The West Wing" can relate these days, having dangled closer to the fire than your average ballpark frank. (This year's final episode is Wednesday, May 14 at 9 p.m., on NBC.) First, there was the departure of Rob Lowe after salary disputes. Then, the show came up against "The Bachelor" and lost a lot of its younger viewers to the dating show's fluffier, far less strenuous fare. Add to that tense renewal negotiations with NBC, Martin Sheen's controversial antiwar comments and Sorkin's missed script deadlines -- which reportedly cost Warner Bros. millions of dollars -- and the flames of Hollywood hell were licking at "The West Wing" like never before. But it was still a shock to those involved with the show when Sorkin announced his departure, particularly since he had just begun to incorporate some racier, more suspenseful story lines, in accordance with the network's wishes.

Of course, Sorkin has a long history of refusing to play nice. In addition to the trouble caused by his arrest for possession of cocaine and hallucinogenic mushrooms in 2001, his annoyance with NBC hasn't exactly been a secret. In a 2002 interview with the New Yorker, Sorkin expressed dismay over NBC's special "The Bush White House: Inside the Real West Wing" -- hosted by Tom Brokaw -- which he called a "valentine to Bush." As an industry executive told the Washington Post, "He's always been a gigantic pain."

But what does it mean to be a gigantic pain in the mixed-up world of television, where an exceptionally talented writer, widely acknowledged as a master of his craft, must answer to network executives focused on the bottom line? Ask any TV writer about the kinds of notes and insights they receive from their network, and they'll tell you five stories about the morons in charge, then top it all off with the "I'm paid to do a job, just like anyone else" philosophy that keeps their groundsman in rubber boots. Being "difficult," in this world, can be translated roughly as "having a pulse."

Before I add my voice to the din that's discussing where "The West Wing" may have gone astray, let's first take half a second to acknowledge the obvious: This is one of the best dramas on television, with writing so intelligent and dialogue so strong it laid the groundwork for the current generation of great TV dramas. Furthermore, while most TV writers are willing to grapple with politics or science as little as is necessary to make it through the next predictable courtroom or autopsy scene, Sorkin has taken on incredibly difficult subject matter with enthusiasm, presenting the bizarre twists and turns of policymaking with humor and no small amount of suspense. Of course now we take for granted that watching a bunch of administrative staff members could be riveting, unpredictable and even touching, but before "The West Wing," making a fictional TV version of the White House office warren look romantic seemed almost unthinkable. Sorkin has a unique style, voice and vision; on almost every show, there's an innovative plot device or a revelatory moment that maximizes the drama of an otherwise dry subject.

Despite its clear place at the top of the heap, though, "The West Wing" has had some pretty obvious flaws for a couple of seasons now, and it's not surprising that "The Bachelor" and "The Bachelorette" could eat into its ratings. Four seasons in, are we any more familiar with C.J. (Allison Janney) or Leo (John Spencer) or Josh (Bradley Whitford) than we were after the first season? Plots focusing on the main characters' personal lives would be easy enough to weave into the mix, yet Josh and Donna (Janel Moloney) continue to flirt openly and do nothing, Toby (Richard Schiff) is so private he's downright boring, and Sam Seaborn (Rob Lowe), mysteriously likable and ripe for the romantic picking, was ignored to the point of blatant negligence. And why? So C.J. and Josh could stride down the hall for the umpteenth time, trading the same rapid-fire quips that feel more outdated than a battery-operated monkey singing the macarena?

And then there are those precision-guided moral navigational systems with which every character on "The West Wing" seems to be outfitted, to the detriment of the show's dramatic impact. Why must everyone, from stoical, holier-than-thou Toby to shocked, "I can't even hear this" C.J., be so damn good, so morally upright and so self-righteously shrill, that they spend most of their time one-upping each other on questions of ethics instead of getting their hands filthy in each others' moral mud pies, like the real people in politics? Maybe I'm excessively jaded about the subject, but I don't buy the naiveté with which these staffers approach the assassination of the leader of fictional Qumar, or the paroxysms of disgust they experience upon discovering their boss has an illness he hasn't disclosed. What rock did these morally pure creatures crawl out from under and, more important, how do you go from innocent millipede to White House staffer without becoming soiled or disillusioned by the dirty realities of politics along the way?

As original and distinct as Sorkin's writing style is, "The West Wing" has needed some new, more exotic flavors to spice up its old standby formulas for a while now. Throwing Ainsley Hayes (Emily Procter) into the mix during the second season definitely added a kick to the show, but she always felt underused. In fact, with every compelling personal subplot, the show always seemed to stop short, like a delightful appetizer followed by ... the check.

Until the last few episodes of this season, that is, when "The West Wing" seemed to veer into some unlikely territory. "Friends" star Matthew Perry steps into Ainsley's shoes and somehow pulls off the standard "I know more than you think I do" stunt that all the president's badasses are required to perform, this time with surprisingly understated grace. Meanwhile, the vice president (Tim Matheson) is revealed to have been conducting an illicit affair, and Charlie (Dulé Hill) directly confronts presidential daughter Zoey Bartlet (Elisabeth Moss) about dating some creepy French guy instead of him.

The surprises culminated in last week's riveting episode, when suddenly Toby was having heartfelt discussions with his pregnant ex-wife Andy (Kathleen York), Amy (Mary-Louise Parker) was blurting at Donna, "Are you in love with Josh?" the creepy French guy was slipping ecstasy into Zoey's drink, and Taye Diggs, the hot guy who helped Stella get her groove back, turned up as a Secret Service agent charged with protecting Zoey, mostly by marching around and screaming into his walkie-talkie. By the end of the show, which gained momentum with unusual cross-cutting and an eerie score, Toby was emoting openly, Donna and Amy were having a real conversation, and Zoey, aka "Bookbag," was kidnapped out from under the noses of her personal army. Is this really "The West Wing" -- or some mind-bending hybrid of "Six Feet Under," "24" and "Law & Order: Criminal Intent"?

Whatever it is, I like it -- which makes it all the more frustrating that Sorkin is leaving the show just as he's starting to deliver exactly the kind of mesmerizing but appealingly personal plots that might win back a younger audience. Still, by leading the show into uncharted territory before exiting, he's certainly made it easier on next year's writers. Instead of being charged with mimicking the same lightning-quick banter we've seen for years (which they'll undoubtedly attempt to do regardless), Sorkin is demonstrating how to take the show in a new direction without compromising its quality. While hardcore "West Wing" fans are probably horrified with such dramatic moves away from the show's bread and butter, more viewers are bound to wake up and take notice.

Will the show barrel downhill without Sorkin and Schlamme at the helm? It's impossible to say. But a source close to the show points out that with John Wells taking over as show-runner -- Wells helped bring "ER" to the small screen and made the show a hit well after Steven Spielberg and Michael Crichton left -- it's a good bet that "The West Wing's" quality won't suffer all that dramatically. Sure, the general flavor of the show might change, possibly to include more sensational or personal plots in line with other popular dramas. But at this point, frankly, "The West Wing" could use a little more salt in its stew.