With Arnold the Barbarian at the gates of Sacramento, Huffington ends her campaign in hopes of derailing the Gubernator. 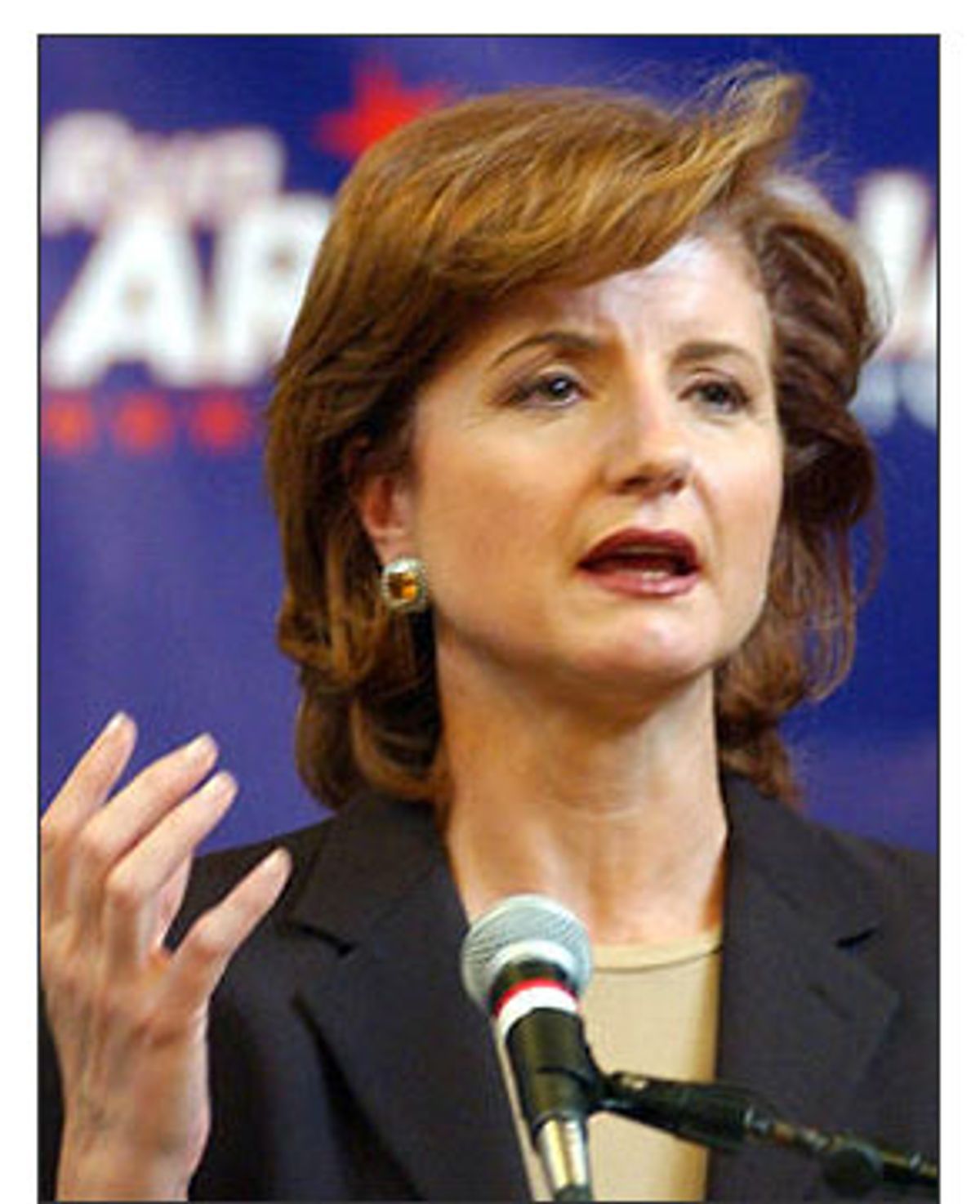 Arianna Huffington -- the conservative turned populist turned woman the Terminator most wants to flush -- withdrew from the race to replace Gray Davis Tuesday night after concluding that her continued candidacy was raising the odds that Arnold Schwarzenegger will become the next governor of California.

"I'm pulling out because I believe now that there is a clear and present danger of the state being taken over by the Pete Wilson-Arnold Schwarzenegger machine," Huffington told Salon Tuesday afternoon as she was preparing to announce her withdrawal on CNN's "Larry King Live." "I want to spend the next week devoting every ounce of energy and time to avoiding what I believe would be a real disastrous outcome for California. That means defeating the recall and defeating Schwarzenegger."

A much-disputed CNN/USA Today/Gallup poll released over the weekend showed overwhelming support for the recall and Schwarzenegger with a 40-25 lead over Democratic Lt. Gov. Cruz Bustamante. As she announced her departure from the race Tuesday, Huffington hit hard at Schwarzenegger. She had previously branded the actor a George W. Bush Republican, seeking to capitalize on the president's less-than-stellar approval ratings in California. On Tuesday, she tied Schwarzenegger tightly to Wilson, the former governor whose positions on immigration and other racial issues polarized Californians -- and whose former advisors are now running the Schwarzenegger campaign.

Although Huffington previously called the recall a historic opportunity to bring "fundamental change in the way California is governed," she said Tuesday that she will now campaign against the recall in order to stop Schwarzenegger. However, she said she is not going to endorse Bustamante -- Schwarzenegger's closest competitor in the race to replace Davis -- at least not yet.

"I'm not at the moment going to be endorsing a replacement candidate," Huffington told Salon. "The most important thing right now is to defeat the recall, and I'm going to ask my voters to vote strategically to avert a Schwarzenegger victory."

What does that mean? "It's up to them to decide," Huffington said.

Huffington, whose syndicated column appears in Salon, said she would refrain from endorsing Bustamante because she has spent "the entire campaign and the last six years of my life speaking out against the dominance of special-interest money and the way it has completely distorted our policy priorities." Nonetheless, she said that it would "definitely" be better to have Gov. Bustamante than Gov. Schwarzenegger, and that she would continue to consider the possibility of endorsing Bustamante as the Oct. 7 election nears.

Bustamante spokesman John Casey said the lieutenant governor recognizes that the backing of Huffington's voters could make the difference in a tight race, and that he would welcome her support if it were offered. Casey unequivocally denied rumors -- which surfaced on the talk-show circuit and in Republican circles Tuesday -- that Bustamante was planning his own withdrawal from the race. "There's absolutely, positively not one scintilla of truth to that," Casey said, stressing that Bustamante would not still be making media buys if he planned to drop out of the race soon.

Although the CNN/USA Today/Gallup poll showed Bustamante trailing badly behind Schwarzenegger, Casey -- like many other political observers -- believes the race is actually much closer than that. For Huffington, however, the race has never been close. She opened the campaign in August polling at about 5 percent, and her numbers never got much better than that. On Tuesday, she placed the blame on "the power of money in politics." Schwarzenegger and Bustamante have money to spend, she said, and her campaign did not. "In a big state like California, I've worked 20 hours a day, I've been up and down the state, but how many people do you reach compared to how many people you can reach with wall-to-wall advertising?"

Political observers agreed that money was a central problem for the Huffington campaign, but they stressed that she faced other barriers as well.

"She's relatively unknown, she didn't have a lot of money, she was somewhat to the left of the general electorate on many of her issues, and among the chattering classes there was some suspicion of her because she started out as an acolyte of Newt Gingrich and then moved many degrees to the left of that," said Sherry Bebitch Jeffe, a senior scholar at the University of Southern California's School of Planning, Policy and Development.

Huffington pitched herself as the voice of disaffected voters, but Schwarzenegger -- with his appeal to Californians more in tune with "Conan the Barbarian" than "Crossfire" -- quickly laid claim to that part of the electorate. And with her regal bearing and Brentwood home, Huffington was probably not the perfect fit for that role anyway.

Still, Huffington did make a mark in the recall race -- both as a champion of the progressive agenda and as an irritant to Schwarzenegger. "Arianna represents a middle ground between the people who still think there's some hope for the Democratic Party and those who have jumped ship to the Green Party," said Tyler Snortum-Phelps, spokesman for Green Party candidate Peter Camejo. As a media darling, Snortum-Phelps said, Huffington had the ability to focus attention on issues that are important to the Green Party, foremost among them the need for public financing of campaigns.

Last week, Huffington filed papers with the secretary of state to launch a ballot initiative that would allow for public financing of statewide campaigns. Bustamante endorsed the ballot initiative at a debate over the weekend, raising speculation that he had done so as part of a deal to get Huffington to drop out of the race and endorse him instead. Huffington said Tuesday that Bustamante's endorsement of the initiative came as a surprise to her and was not part of any sort of deal. "If there had been a deal, there would have been an endorsement," Huffington said.

With Huffington leaving the race, the pressure continues to mount on Camejo and Republican State Sen. Tom McClintock to do the same. McClintock has made it clear that he is not going anywhere, even as the Republican Party coalesces behind Schwarzenegger. And Camejo's spokesman said Tuesday that he is in the race to stay -- even though he'll "understand" if his supporters vote for Bustamante on Oct. 7 to avoid having to say the words "Governor Schwarzenegger" on Oct. 8.

Whether any of that matters depends, of course, on the race between Schwarzenegger and Bustamante. While last weekend's CNN/USA Today poll showed overwhelming support for the recall and Schwarzenegger with a commanding lead over Bustamante. One Democratic source told Salon this week that an internal Bustamante poll puts the lieutenant governor just one point behind Schwarzenegger. If the race is really that close, then Huffington's 3 or 4 or 5 percent could make the difference. "It helps Bustamante a little," said Mark Baldassare, director of research for the Public Policy Institute of California, who spoke to Salon on Monday, one day before Huffington made her announcement. "Both Huffington and Camejo are taking a few points away from votes that would otherwise go to Bustamante. In a close race, these things matter."

Nathan Ballard, a spokesman for the anti-recall, pro-Bustamante California Labor Federation, said that Huffington's candidacy was "siphoning" independent women away from Bustamante. Ballard predicted that the women who supported Huffington would return to the Democratic fold if she were to leave the race -- in part because women tend Democratic, and in part because the alternative in this election is so unpalatable. "Arnold," he said, "is driving women away."

As a political candidate, Huffington may ultimately be remembered most for shining a spotlight on Schwarzenegger's "women problem." At the candidates' debate in Sacramento last week, she went after Schwarzenegger early and often. When he snapped back, Huffington complained that his behavior was typical of the way he treats women. Schwarzenegger's now-infamous retort: "I just realized that I have a perfect part for you in 'Terminator 4.'"

Although Schwarzenegger later denied it, the comment was plainly a reference to a scene in "Terminator 3" in which Schwarzenegger slammed the head of a female actor into a toilet -- a scene the actor described with unseemly glee in an Entertainment Weekly interview earlier this year. Huffington took very public offense at the remark, apparently hoping that it would unite women behind her and against Schwarzenegger.

It didn't. While some feminists expressed outrage, many women -- including liberals -- thought that Huffington provoked the comment and then protested too much. "I watched the debate with a group of women of all ages, and to a person they were so offended by Arianna," said Barbara O'Connor, director of the Institute for the Study of Politics and Media at California State University, Sacramento. "For her to play the 'you mean man' role ... well, you can't have it both ways. The cutesy femme fatale role and the Attila the Hun role are not consistent. They're just not."

Huffington made it clear Tuesday that she will continue to take on the Terminator at every opportunity. What is not so clear is whether it will make any difference. As USC's Jeffe explained, Schwarzenegger already suffers from a gender gap, and a continued fight with Huffington may not make it much worse. "When Schwarzenegger went after Arianna, he may have lost some women, but he didn't have them to begin with," said Jeffe. "There just wasn't all that much of a risk [for Schwarzenegger] because he's not going to get women anyway. But he may have made some inroads with NASCAR dads."