Yes, the world needs a documentary that somehow makes sense of the charismatic, contradictory pioneer of gangsta rap. This isn't it. 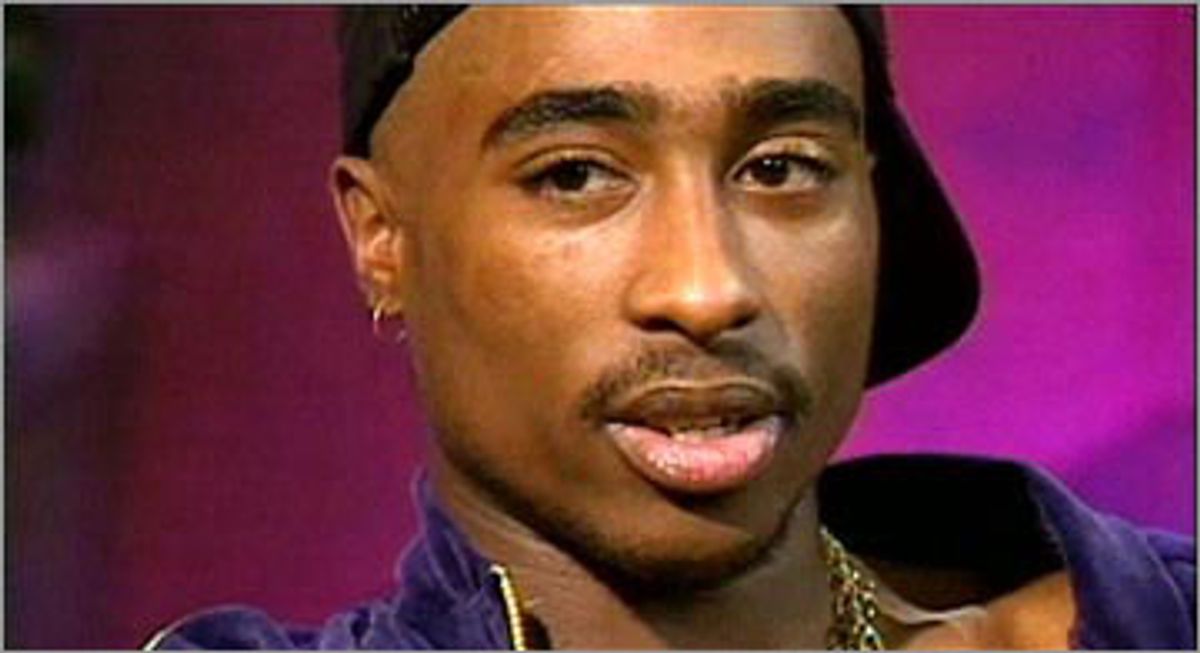 The documentary "Tupac: Resurrection" tells the story of the late Tupac Shakur -- still a best-selling hip-hop artist, seven years after his death -- in his own words. As the movie's press notes explain, Tupac loved doing interviews and would answer questions at great length, often very thoughtfully. That means director Lauren Lazin had lots of material to work with, from Tupac's ruminations on the great time he had in high school in Baltimore (it was a performing-arts school, and there's actual footage of Tupac, very seriously and gracefully performing a few moves in a ballet class) to his assertion that he didn't create thug life -- he merely diagnosed it.

It probably seems like a good idea to build a documentary around Tupac's willingness to talk about himself. But ultimately, it isn't. "Tupac: Resurrection" is most valuable for the way it drives home Tupac's undisputable charm and intelligence. Tupac was born in New York in 1971; his mother was Black Panther activist Afeni Shakur. (She was also directly involved in the making of this movie.) The family moved to Baltimore and later to Marin City, Calif., which is where Tupac got his start as a hip-hop artist. In the movie, when Tupac speaks of his upbringing and of the sorts of things he was interested in as a kid, you get a pretty clear window into the exact nature of his gifts.

He describes the range of music that he responded to in his high school years (the list includes everything from Frank Sinatra to Kate Bush to Don McLean), and how much he loved being onstage (his idol when he was a kid was Gary Coleman of "Diff'rent Strokes"). He talks about how rough it was to grow up as the child of a single parent, and of the day he realized that nearly all of the African-Americans around him were poor -- a truth that didn't really hit him until the family moved to California. When he talks about wanting to do something to change that reality, his conviction is real and palpable. "I think that rich people should live like poor people, and poor people should live like rich people," he states flatly, but the kicker is what drives his point home: "And it should change every other week."

But somewhere, midmovie, Tupac's logic goes askew, and Lazin doesn't shape the picture enough to call him on his contradictions. Tupac himself admits to being two people -- a sensitive one and an angry, forceful one. He talks at one point about using his music to tell "deep stories" about "real human need." Later, he defends his frequent use of the word "bitch," claiming that some women are bitches. Then he quickly notes that some, like his mother and his sister, aren't. So much for deep stories and real human need.

One minute he's talking about using his music to show the world what it's like to be a young black man in America. The next he's complaining that he shouldn't have to be a role model. Tupac explains how he was arrested for the first time, a story that's all too believable: The charge was jaywalking, but when he questioned the cops who had stopped him, they beat him up. (I once watched a couple of Boston cops beat some white male friends of mine for a "crime" not dissimilar to jaywalking; I shudder to think what would have happened to them if they'd been black.) But Tupac glosses over his later arrests, and when he tries to justify his actions in the sexual abuse case for which he eventually ended up serving time, his excuses seem feeble and puny. His excuses are, of course, charming -- but the movie never calls Tupac on his baloney.

You could argue that all Lazin wants to do is put the words out there so we can draw our own conclusions about Tupac and his life. But there's never a minute's doubt that "Tupac: Resurrection" is designed as an overt homage. (Consider the title, for one thing.) Tupac was shot to death in 1996 after a dispute in a Las Vegas club (a fight that he and Suge Knight, the president of Tupac's record label, Death Row, apparently instigated). "Tupac: Resurrection" ends with shots of loyal fans all over the world, holding up their Tupac records or standing in front of memorial drawings. The movie makes it clear that Tupac was a man of contradictions; the problem is that it gives all those contradictions equal weight. And it never addresses the problem that the more Tupac opens his mouth to explain what his music is or isn't about, and what role in society it is or isn't supposed to serve, the more obvious it becomes that his views aren't reflected in the actual music.

I don't have an affinity for gangsta rap, and I don't buy the notion that it's an agent for social change. That's partly because I don't think art has a responsibility to instruct us in the first place: I'm predisposed to dislike any type of music that's held up as instructional, whether it's made by Tupac Shakur or Cat Stevens.

But even beyond that, it rankles me that so many gangsta-rap artists justify aggression and sexism in their music by claiming that they're just "keeping it real," so that "things will change." Does anyone ever consider that keeping it real is more likely to prevent change from happening than to foment it? Gangsta-rap artists and their fans often take great pains to lend the work a moral weight that it just doesn't have, when its morality (or even its lack thereof, if that's your view) isn't the issue at all. If the work at hand needs to be explained and justified by extra words, it's not doing its job in the first place.

That said, I admit that I wish gangsta rap could jolt me into deeper understanding, instead of simply turning me off: I don't see the alleged theory of gangsta rap, as opposed to the actual practice, as being all that different from the simmering cries of anger and fear and resentment that we got from earlier African-American artists like Sly Stone (on the LP "There's a Riot Goin' On") or the O'Jays ("Backstabbers") or the Undisputed Truth ("Smiling Faces Sometimes") or Curtis Mayfield ("Freddie's Dead"). (Believe me, all of those songs were pretty eye-opening for a little white girl growing up in an average middle-class neighborhood in the '70s.)

"Tupac: Resurrection" is clearly designed for people who are already Tupac fans -- and that's a shame, because there are plenty of things that the world at large ought to know about Tupac Shakur. Even if he didn't use his talent in ways that white America is comfortable with, there's no doubt he had loads of it. And I suspect few nonfans realize how hilarious Tupac could be: There's a great moment in which he describes to MTV's Tabitha "The Loneliest Monk" Soren how lousy prison food is -- most notably, the dispiriting effect of finding long, scraggly hairs in your Jell-O. But in the end, "Tupac: Resurrection" gives us too much raw Tupac, and yet somehow not enough. He remains a mystery -- one who still sells lots and lots of records.