A journalist who was embedded with the U.S. Marines in Fallujah explains how the Bush White House lost the key battle of the Iraq war. 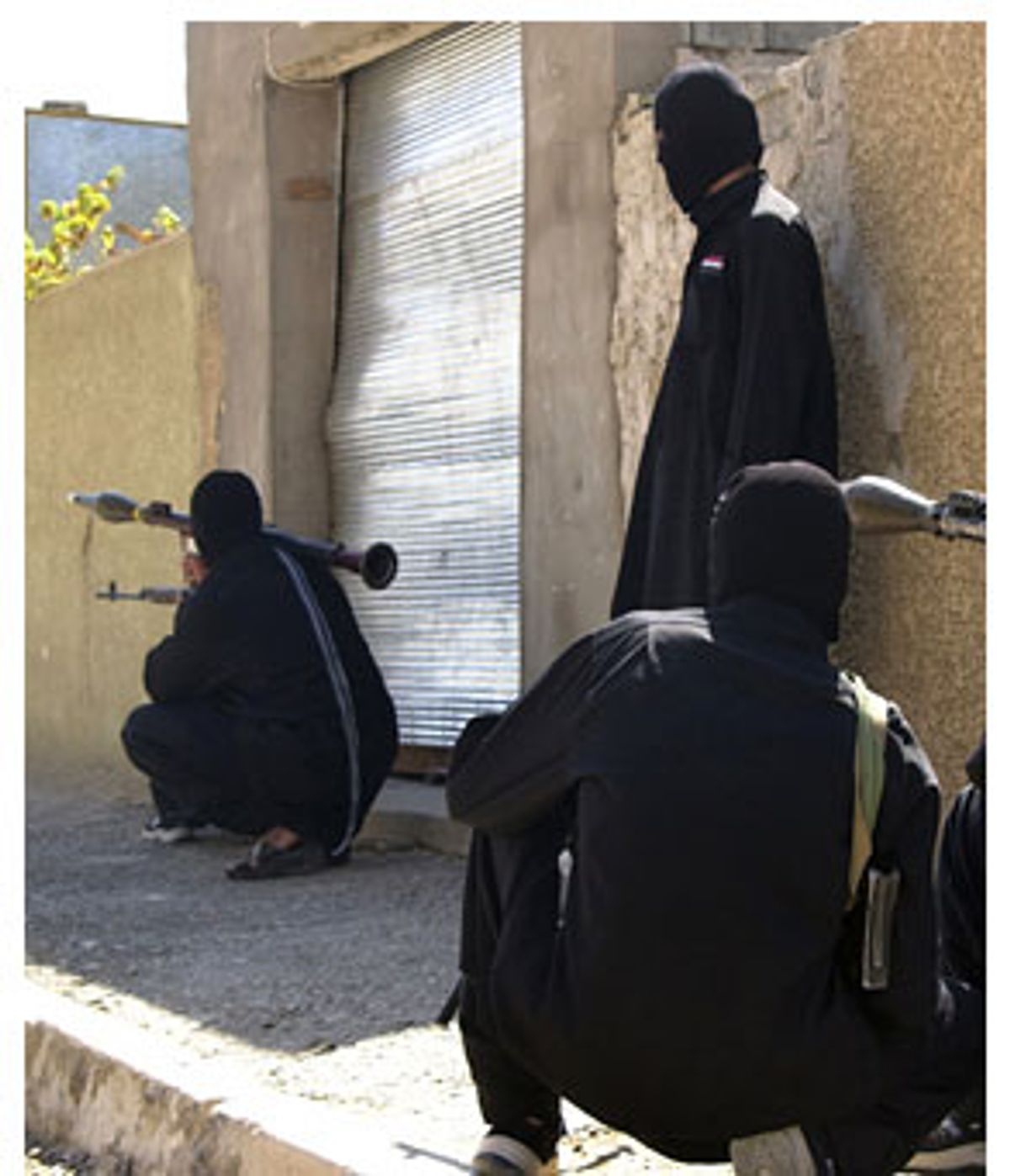 On Sunday, at his change-of-command ceremony, the outgoing top Marine general in Iraq, Lt. Gen. James Conway, gave tragic voice to what thousands of servicemen throughout Iraq have believed for months. He announced that the April assault on Fallujah had been an overly aggressive mistake and that the often-vacillating American approach to the town had undermined U.S. efforts to win the hearts and minds of local Iraqis.

I arrived in western Iraq shortly after the siege of the town was called off, and whenever the subject came up, young Marine officers -- men with crew cuts in the duty-honor-country mold who evince an almost pathological optimism about all things Iraq -- would look away wistfully or just shake their heads in disgust. Many of the Marines involved in the attack would have preferred to complete the assault once it started, despite the likely huge increase in civilian casualties. Those who fought on the ground have complained about the timing, intent and restrictive rules of engagement of the White House-ordered assault.

Responding to the killing and subsequent mutilation of four U.S. contractors in Fallujah on March 31, Conway had led a 5,000-man Marine force that laid siege to the restive town for over three weeks. Bad press and reports of civilian casualties by Al-Jazeera later caused the Marines to halt their advance into the heart of the city and, on the eve of a renewed offensive, the Marines unexpectedly turned over the town to a local militia force that later became known as the Fallujah Brigade.

Reflecting on the course of the White House-ordered campaign on Sunday, Conway indicated that he had had serious misgivings about the Fallujah operation from the get-go, "We felt that we probably ought to let the situation settle before we appeared to be attacking out of revenge," he told reporters gathered on the sprawling Marine base just east of the embattled town. "I think we certainly increased the level of animosity that existed."

The mainstream press has largely overlooked the fact that in the case of Fallujah, the White House unnecessarily injected itself into the military's tactical decision-making process in Iraq, ignored the informed opinions of ground commanders, and in effect micromanaged the battle. According to many observers, the seemingly contradictory U.S. military actions over the course of the siege were largely the result of the wishy-washy directives being issued by the Bush administration and its failure to appreciate the implications of sending in a large Marine force to seize a notoriously hostile town.

To both outside observers and former high-placed officials, including former U.S. Central Command chief Anthony Zinni and historian Robert Kaplan, it appeared as if the Bush administration had ordered the punitive campaign out of anger and then lost nerve when Arab outrage over civilian casualties rose to a fever pitch. Says Kaplan, who was embedded with the Marines during the opening stages of the battle and who later wrote about it for the Atlantic Monthly, "It's fine to send in the Marines. It's fine to have a cease-fire, but you can't do both. What this amounts to is ... foreign policy incoherence."

In his unusually candid parting remarks, Conway appeared to echo this sentiment, saying, "When you order elements of a Marine division to attack a city, you really need to understand what the consequences of that are going to be and perhaps not vacillate in the middle of something like that. Once you commit, you've got to stay committed."

In his remarks Conway likely was attempting to set the record straight on Fallujah and distance himself from the unmitigated disaster that it has become for the American mission in Iraq. For the Bush camp, intent as it is upon portraying its candidate as an unflappable war leader and John Kerry as an intellectually addled flip-flopper, such charges from high-ranking members of the military would seem to call Bush's vaunted decisiveness into question.

Little of this comes as a surprise to the men and women on the ground with whom I spoke in Fallujah in April. While rigorously apolitical, most Marines, up to the rank of major, when discussing the battle, readily admitted that it was overly politicized, and many bluntly told me that they "got fucked by higher-ups." One particularly conscientious 1st sergeant, from the 1st Battalion of the 5th Marine Regiment, kept getting choked up when I asked him to recount the battle and was openly disdainful of the command authorities who had ordered his men to attack the city and then paradoxically ordered them to retreat as soon as victory seemed within reach. "There's no two ways about it: We were robbed of victory at Fallujah."

The overwhelming impression one gains from these Marines is that while they were surprised by the decision to launch a full-scale assault on the city -- the people I spoke to expressed no desire for revenge -- they considered the decision to call it off in midstream disastrous, believing that higher-ups had seriously undercut their credibility in the eyes of local Iraqis.

Lamenting this turn of events, retired Marine Gen. Zinni, in a speech not long after the siege, said, "One thing you learn in this business is, Don't say it unless you're going to do it. In this part of the world, strength matters. And if you say you are going to go in and wipe them out, you'd better do it." Another Marine, a chain-smoking lance corporal from Alpha Company, 1st Battalion, Fifth Marines, put it more bluntly: "My buddies died in vain."

Although few have blamed the Marines themselves for the mistakes in Fallujah, it is only now, as principal commanders such as Conway exit Iraq, that what actually occurred is beginning to emerge. In fact, as I came to learn during my brief stint in Iraq, Marine commanders were initially unconcerned by the reports of the four slain contractors and planned what can best be described as a modest response to the Iraqi atrocities. Kaplan, the author of "Balkan Ghosts," recalls touring the Abu Ghraib prison compound with the commanding general of the 1st Marine Division on March 31. He remarked that the general was only momentarily concerned by reports of the contractors' deaths and subsequent mutilation. Kaplan recalls, "He never raised the issue. He may have thought, 'Oh, shit, they may want us to do something about this,' but five minutes later he had other problems on his hands, like dealing with the ongoing insurgent mortar attacks."

(It is fascinating to note the disparity between the reactions of troops on the ground and the reactions of pundits back home who immediately drew parallels between Fallujah and Mogadishu, Somalia, in 1993, when the bodies of dead U.S. Army Rangers were dragged through the streets. No Marine I interviewed drew this same parallel, and they were surprised that others had done so.)

An operations officer from 2nd Battalion, 1st Marines, informed me that initially his battalion was considering a tightly focused series of raids in Fallujah to capture or kill the men who had slain the contractors but that this was quickly scotched by orders from higher-ups. The more measured response was quickly discarded when instructions came from Gen. Ricardo Sanchez, Conway's boss in Baghdad, on April 1 to prepare for a no-holds-barred assault on Fallujah. (It was later reported and confirmed by officials in both Iraq and Washington that Sanchez and his boss, Gen. John Abizaid, were acting on instructions from the White House.)

The restraint on the part of the Marines on the ground is in line with Conway's instructions to his subordinate commanders at the time. I spoke with Conway at a Marine base in California before he departed for Iraq, and he spoke passionately about his finely wrought ideals of cooperation with Iraqis and hopes of establishing youth soccer leagues throughout western Iraq. He explained with pride that a plan was in the works to bring a delegation from the Congressional Black Caucus to speak to Sunni tribal leaders about legislative coalition building for minority groups in a democracy. All of this stands in stark contrast to what unfolded once the Marines crossed the Rubicon and into the dark heart of Fallujah.

Despite his initial objections, Conway eventually acquiesced and the Marines launched the prescribed attack with their typical ardor, quickly seizing sizable chunks of the town. However, as media coverage critical of this heavy-handed approach began to mount, the American high command initiated a long string of cease-fires. (Many Marines contend that the cease-fires began only because the insurgents in the town were beginning to suffer heavy casualties and suddenly wanted to negotiate their way out of the fight. Patrick Graham of Harper's magazine, who lived with a band of Fallujah-area insurgents for several weeks, confirms this.)

The Marines also found their rules of engagement (about whom they could and could not shoot) becoming progressively more restrictive. The Marines from Bravo Company, 1st Battalion, 5th Marine Regiment, for instance, were ordered not to cross Highway 10, which bisects the town -- a maddening development that in their view granted the insurgents a choice sanctuary and allowed them to stage ambushes at their leisure. This trend of White House micromanagement reached a crescendo as the siege entered its third week and the Marines were ordered to surrender the town to the hastily vetted scratch force of Iraqis that later became known as the Fallujah Brigade.

Conway's exculpatory comments Sunday highlight the extent to which the White House was "joysticking" events on the ground (in contradiction to the often celebrated post-Vietnam tradition of keeping the Beltway out of the commander's tent). Given the inestimable benefit of hindsight, it is clear that the White House's draconian response to the March 31 killing of the contractors was a complete disaster. What remains obscure is the rationale behind the Bush administration's ill-advised policy and its uncharacteristic willingness to flatly overrule on-scene commanders such as Conway.

Major questions remain about the nature of the decision-making process at Fallujah -- specifically, how vigorously did Conway and other Marine commanders protest the White House's order to attack? How much was President Bush personally involved in the decisions? To what degree were the cease-fires driven by the protests of fledgling Iraqi legislators in Baghdad?

In retrospect, what is most striking about the entire set of events in Fallujah is the vertiginous postmodern sheen that it takes on at times. When one excavates the history of the battle, it quickly becomes apparent that all the major policy decisions were driven not by events on the ground but instead by the raw power of the images the battle produced: Americans being dragged through the streets, wailing Iraqi mothers returning to shattered homes, American Spectre gunships strafing neighborhoods -- pixilated nightscope views almost Gothic in tone, no perception so definite that it might not be interpreted as its opposite.

One thing can be said for sure: Never before has media coverage of events so dominated the entirety of the military process; never before has the raw power of the burning images so trumped the seasoned opinions of professionals on the ground.

In an insurgency such as that in Iraq, where the political realm is so closely tied to the tactical realm, perception often becomes reality. Nevertheless, the question remains why the White House failed so completely in its grasp of Iraqi perceptions and allowed the coverage of Fallujah to lure it into a rash decision to punish the residents of Fallujah and then reverse itself when the going got tough.