"Charlie and the Chocolate Factory"

Tim Burton's psychedelic take on Roald Dahl's classic book is satisfying and delicious -- or at least completely nutty and fascinating. 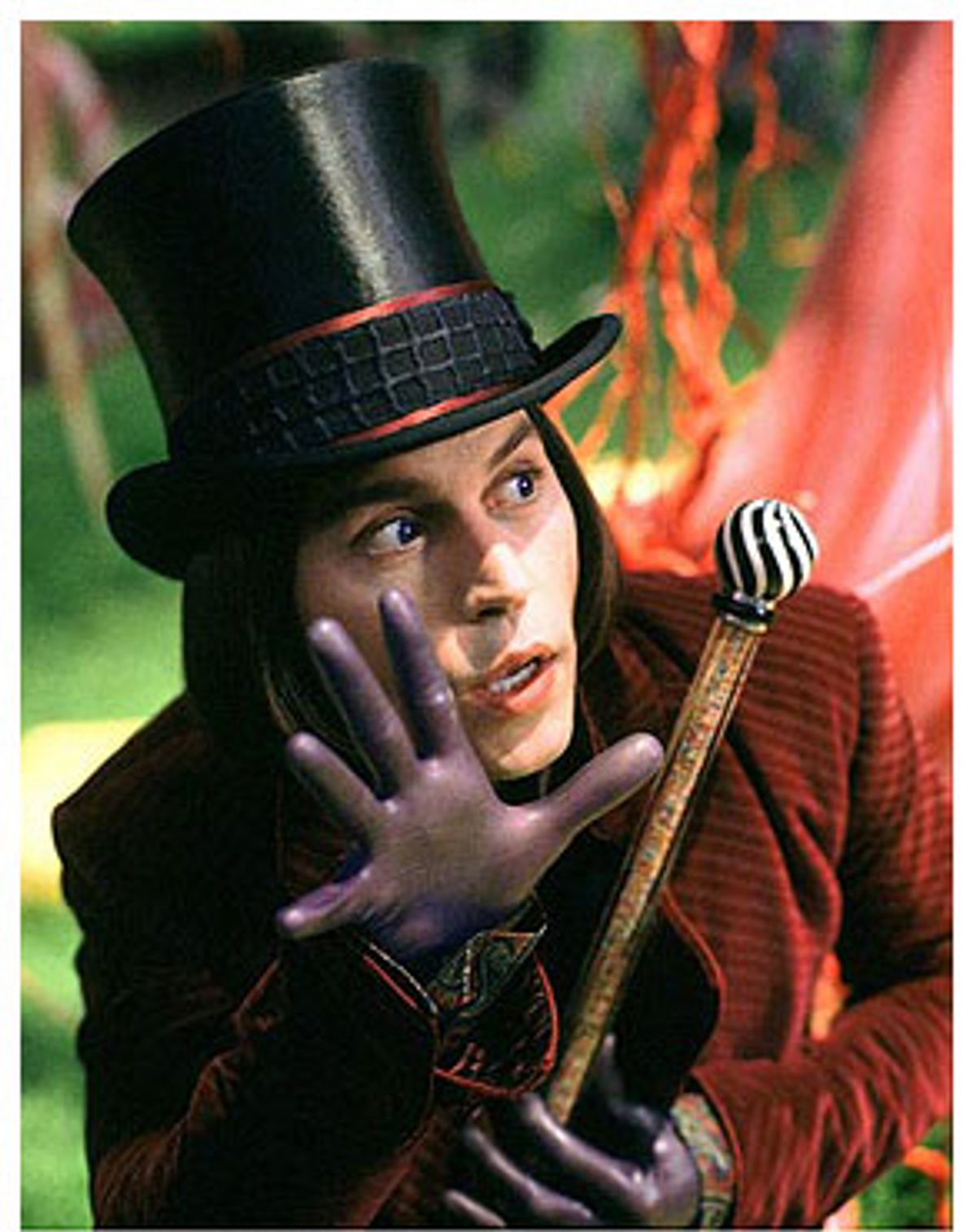 There are problems here and there with Tim Burton's "Charlie and the Chocolate Factory," problems that seemed extremely significant to me as I watched the movie but now, two days later, have melted into a syrupy puddle of abstraction. The picture's visual extravagance sometimes has an unpleasantly garish edge, and in places Johnny Depp's mechanically stylized lead performance feels strained and excessively conceptual. But enough about that for now: Did I really see a circle of 100 real, live squirrels perched on high white stools -- the futuristic pinwheel of a room around them looking like something out of "Sleeper" -- tapping walnuts to ascertain their quality and then either opening them gingerly or dismissively tossing them over their tiny shoulders? Did I really see an Oompa Loompa dressed in a witch-doctor outfit, doing a ceremonial jig with a cacao bean on his head? And did I really see a chorus of identical-looking dancers fasten neat little rubber sperm caps on their heads as a preamble to an Esther Williams-style water-ballet routine?

"Charlie and the Chocolate Factory" is absinthe in movie form, a white chocolate space egg of a picture that has a giddy hallucinatory quality in some places and an overcalculated glossiness in others. But for better or worse, it's fascinating. Burton's movie may be truer to the mischievously misanthropic spirit of Roald Dahl's 1964 novel than the 1971 Mel Stuart musical "Willy Wonka and the Chocolate Factory" was: Burton picks up on the weird, sadistic streak of Willy Wonka, the reclusive, eccentric owner of a giant candy factory who barely even bothers to pretend to like children. In some ways Burton and Depp take the sadism, and the weirdness, too far, but at least you can't accuse them of trying to file down Dahl's magnificently pointy teeth. The screenplay, by John August (who also wrote the script for Burton's last picture, the treacle-glazed "Big Fish," adapted from Daniel Wallace's novel), has snap and bite and a certain degree of warped loopiness (as when Depp's glassy-eyed Wonka greets his public with a crisply enunciated, "Good morning, starshine -- the earth says hello!"). The dialogue is reasonably faithful to the source material, at least in its tone, and Danny Elfman has written a handful of mildly catchy songs using Dahl's original lyrics, which have to do chiefly with the diabolical pleasures of squeezing spoiled fat kids through giant tubes and turning gum-chewing brats into huge, floating blueberries.

And yet, even with all those good intentions -- and so many liberal dashes of inspired lunacy -- "Charlie and the Chocolate Factory" doesn't hang together as well as it should. The movie's opening scenes are in many ways the most engaging: That's when we meet young Charlie Bucket (Freddie Highmore, of "Finding Neverland," in a performance that's suitably earnest without ever lurching into cuteness), who lives in a small, rickety gray house with his mother and father (Helena Bonham Carter and Noah Taylor) and his four elderly grandparents, who spend nearly all of their time in bed. There's never enough to eat in the Bucket household -- the family subsists on nothing but cabbage soup, which is all Mr. Bucket, who works in a toothpaste factory screwing caps on tubes, can afford. But this is a home where everyone genuinely cares for one another, and young Charlie is particularly close to his Grandpa Joe (the wonderful Irish actor David Kelly), who regales young Charlie with stories of his days long ago as an employee of Willy Wonka, the owner of the most marvelous candy factory in the world, which happens to be located right near the Buckets' house.

But Wonka is a strange guy: Years ago, he was bitterly disappointed by employees who sold his secrets, and so he has closed his factory to the public -- no civilian has been inside it for years. Wonka has announced, though, that he will give away five golden tickets, wrapped randomly in his signature chocolate bars. The recipients of these tickets will be given a tour of the factory and are also eligible for a special prize.

Charlie, who gets only one candy bar a year, for his birthday, has little hope of finding a ticket. But sure enough, through an almost magical turn of events, he gets one. And so this kind, unspoiled, well-mannered child arrives for his day at the factory with the other winners and their parents; his Grandpa Joe accompanies him.

The other kids, as anyone who has read Dahl's books or has seen the earlier movie knows, are hateful brats whose indulgent parents haven't done them any favors, and they meet nasty (although not deadly) fates at Wonka's hands. Wonka, as Depp plays him, is hardly the kind of guy you'd entrust your kids' welfare to: A potential sociopath in a velvet coat and bright purple latex gloves, he speaks in a sugary, clipped, robotic singsong; his skin has a greenish-gray cast; and his eyes, beneath his Prince Valiant haircut, twinkle with demonic blankness.

Depp's Wonka is scary as heck, but not necessarily because he seems like a child molester. Some critics and smartypants onlookers have noted that the character bears a creepy and unfortunate resemblance to Michael Jackson, but to me, he's much more like Phil Spector, a wacko soft-spoken prince who spends his days pacing his prisonlike palace. Depp's performance isn't bad; it's just so carefully pruned, like a sharply tailored topiary bush, that it feels more like character design than a performance. When he fixes his glazed stare on the little tykes he's squiring around his vast, psychedelic-colored factory and observes, "You're all quite short, aren't you?" it's enough to coax a shuddering laugh out of you. But past a certain point, the performance feels like shtick, a tired riff on one uncomplicated idea. We don't necessarily have to like Willy Wonka, but should just looking at him give us a headache?

Burton has fleshed out Dahl's story to some degree, giving us more information about Wonka's background than we perhaps care to know (he has some daddy issues, and you would, too, if your father was a dentist played by the marvelously authoritarian Christopher Lee). And while the candy factory is something of a visual marvel -- including a landscape of mushroomy-looking gumdrop trees and a shiny fuchsia Viking ship with a curvy seahorse at the prow -- the opening and closing sections of "Charlie and the Chocolate Factory" are the ones that work best. In other words, the scenes that take place in the impoverished Bucket household are more effective, emotionally, than anything else in the movie. With a few notable exceptions ("Pee Wee's Big Adventure" among them), Burton is better with the infinitely variegated palette of grays than he is with candy colors -- bright colors don't seem to fire his imagination as much as dark ones do.

But maybe the myriad flaws of "Charlie and the Chocolate Factory" are simply the downside of genius. There are sequences in "Charlie and the Chocolate Factory" that are as nutcase-dazzling as anything Burton has ever attempted. Burton tells the back story of how Wonka recruited the Oompa Loompa tribe, from Oompa Loompa land, to work in his factory. (The Oompa Loompas are all played by one actor, the marvelously expressive Deep Roy.) In a sequence straight out of a Bob Hope/Bring Crosby "Road" movie -- with all the now-forbidden political incorrectness that implies -- Burton shows us Wonka communicating with the Oompa Loompa leader, in a combination of meaningful grunts and improvised sign language. The movie's ambitious production numbers, featuring jillions of computer-generated Oompa Loompas, are clear, affectionate homages to Busby Berkeley (as well as the aforementioned Esther Williams).

And then there are those squirrels, with their alert ears and fluffed-out tails. The reality is that not all of these nut-inspecting prodigies are real, live squirrels. According to the movie's press notes, Burton had his heart set on using live squirrels for the scene, but squirrels, though smart, are independent-minded little buggers and difficult to train. (In addition to the fact that their physiology prevents them from tossing nuts, or anything else for that matter, over their little shoulders.) So Burton had to settle for an artfully filmed combination of real squirrels and computer-generated and animatronic ones. You can kind of tell the difference, but it doesn't much matter. As jaggedly problematic as it is, "Charlie and the Chocolate Factory" couldn't have emerged from anywhere but the dark, chambered nautilus of Burton's imagination -- in its best sections, it's magically deranged in a way no other filmmaker could even come close to pulling off. The candyman can.