Secrets of "the 'stans," lands of raw beauty and uninspiring governments, revealed with help from a Kyrgyz novelist and an expert on militant Islam. 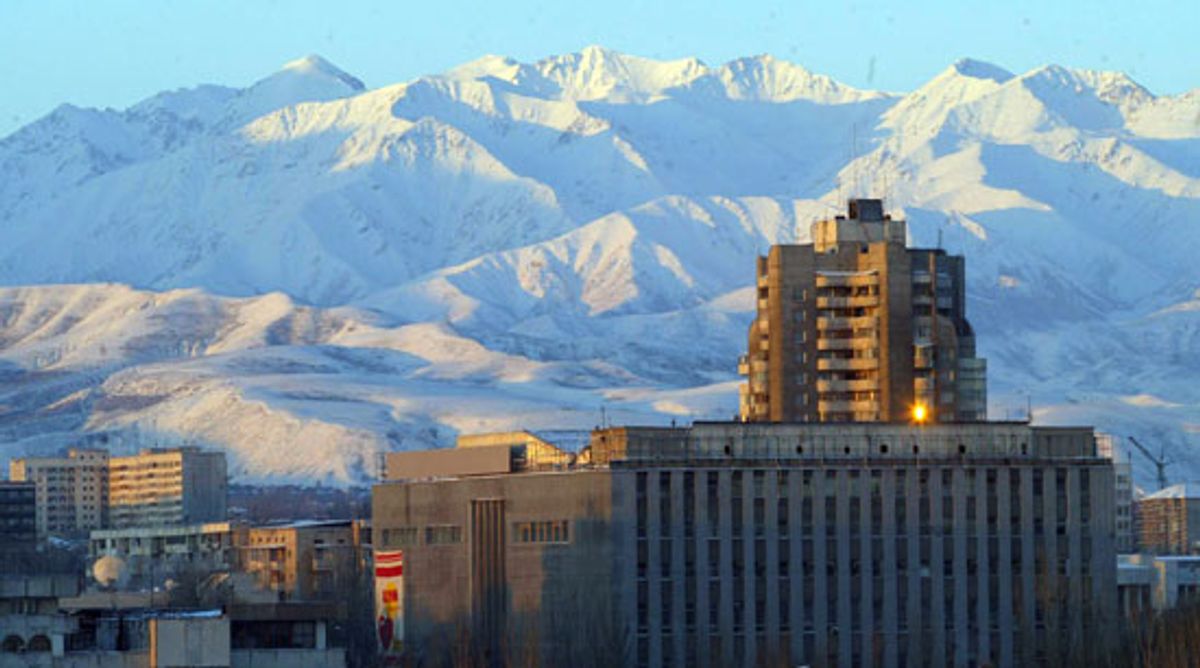 Within the nations collectively known as "the 'stans" one can sense the still-cooling results of numerous historical collisions, not all of them figurative, seeing that an active fault line runs straight through the region. (Uzbekistan's capital, Tashkent, was earthquake-flattened as recently as 1966.) Central Asia is where Europe abuts Asia and Christianity smashes against Islam, where Alexander the Great was stopped dead in his tracks and Genghis Khan and Tamerlane staged their conquests of the known world. The region received one of its first known English visitors in the 1500s, and his subsequent report was measured in its enthusiasm: "These merchants are so beggarly and poor, and bring so little quantity of wares ... that there is no hope of any good trade there to be had."

Variously ruled by Arab conquistadors, Mongol horsemen, Persian meddlers, a series of cruel but sometimes enlightened despots, czarist Russia and, finally -- and most disastrously -- by the Soviet Union, Central Asia is the geographical equivalent of an oft-forwarded parcel bearing the traces of each of its temporary holder's stamps. It is home to despairingly vast deserts, several large inland seas, endless steppes, beautiful mountainous valleys, and some of the world's least inspiring governments. Its religion is predominantly Islam, but a softer, less ideological incarnation than that which is typically encountered in Arab states, and its culture is a curious agglutination of Soviet, Turkic, Persian and Mongol influences.

A fine place to begin one's encounter with the diverse and often disquieting literature of Central Asia would be Chingiz Aitmatov's "The Day Lasts More Than a Hundred Years." An ethnic Kyrgyz who writes in Russian, Aitmatov is the only Central Asian fiction writer to have been widely translated in the West. After years of working as an apparatchik in the Soviet government and achieving small prominence as a story writer and playwright, Aitmatov came to world renown with the publication of his first novel in 1980, which broke the gait of lockstep Soviet literary circles to a degree not seen since Alexander Solzhenitsyn's "One Day in the Life of Ivan Denisovich" in 1963. Aitmatov's father was executed during Stalin's purges, and Aitmatov's greatest book is simultaneously a cautious but devastating critique of Stalinism, a fable of a Kazakh man attempting to bury a friend according to Muslim etiquette, and a deeply weird sci-fi novel replete with space stations and what Russian speakers refer to as inoplanetyane (that is, extraterrestrials).

Solzhenitsyn's "Cancer Ward" (1968) is partially based on its author's own doubly ill-fated experience of recovering from skin cancer at the tail end of his eight-year sentence to the gulag. (Solzhenitsyn's crime was criticizing Stalin in a letter to a friend during World War II, when he was an officer in the Red Army.) Primarily the story of an unjustly exiled man named Oleg Kostoglotov, "Cancer Ward" is a multicharacter and often bitterly funny study of the lives of exiled Soviets, from still-proud Stalinists to confused men and women unsure of their actual crime to the nurses and doctors who do their best (which is not much) to help "cure" them. It reads as if "M*A*S*H*" had been crossbred with "Darkness at Noon." The unnamed setting of "Cancer Ward" is Tashkent, long considered one of the region's more cosmopolitan cities, but currently an open sore of dictatorial policies and suppurating unrest. "Cancer Ward's" unforgettably bleak final scene takes place in Tashkent's zoo, which was apparently as upsetting in the 1950s as it remains today.

A more recent novel about Central Asia is Robert Rosenberg's "This Is Not Civilization," published in 2004, which contains what is surely one of contemporary fiction's most beguiling opening lines: "The idea of using porn films to encourage dairy cows to breed was a poor one." Rosenberg is a former Peace Corps volunteer who served in Kyrgyzstan, which reminds us that the Peace Corps, if nothing else, has midwifed some first-rate American literature with an internationalist bent. While Rosenberg's novel roams widely (from Arizona to Kyrgyzstan to Istanbul), its non-Western characters are frequently the most interesting. The novel's central Kyrgyz character, Anarbek, must cope with his daughter's culturally sanctioned "wife-napping" (whereby a young girl is literally stolen from her home and forced to marry) as well as the ruination of his cheese factory. The delights of this novel are primarily its sense of humor and humanely old-fashioned empathy for all. By its final page, one cannot be at all sure which civilization it is that the novel's title piquantly condemns. All of them, probably.

There are many fine histories detailing the 19th century clash of Russia and Great Britain's imperial ambitions in Central Asia, but the best remains Peter Hopkirk's 1992 book "The Great Game: The Struggle for Empire in Central Asia" (2002). The title refers to what has been called a "Victorian-era Cold War" that, despite both parties' best efforts, never resulted in a direct military confrontation. "Great Game" was coined by one of its central players, an intransigently Christian British officer named Arthur Connolly, whose ghastly fate is one of many that Hopkirk details. While the agents of Europe's two most powerful nations vexed and stymied one another from Kandahar to Khiva, the region's local people watched and waited and occasionally acted, such as during the British retreat from Kabul in 1841. The result was the single largest military disaster in Great Britain's history and, in Hopkirk's retelling, a story as hypnotically monstrous as 9/11 footage. This book is required reading for a general understanding of how modern Central Asia took uncertain shape.

Fears of militant Islam in the former Soviet republics of Central Asia are, in the popular media, almost always overstated. Seven decades of Soviet atheism have left their mark, and state-appointed religious leaders are still widely derided as "red mullahs." That said, Central Asia has pockets of religious unrest, which ruthless governmental crackdowns, especially in Uzbekistan, have predictably made worse. Ahmed Rashid's "Jihad: The Rise of Militant Islam in Central Asia" is the best primer on this troubling aspect of contemporary Central Asia, and is worth reading if only for a brief story Rashid describes in his preface. While in Dushanbe, Tajikistan, one year into its 5-year-long civil war, Rashid enjoys "a leisurely Sunday lunch" with a Tajik poet, a novelist and a journalist -- "the cream of Tajikistan's liberal intelligentsia." Suddenly Rashid is startled by the sound of nearby gunfire. The poet, the novelist and the journalist, to Rashid's shock, "suddenly pulled concealed pistols out of their pockets and fired back." To draw too many conclusions from an anecdote mired in such direly specific circumstances would be unwise, but it does suggest the heat packed by the best of Central Asia's literature -- not all of it figurative.