The fall of the house of Pynchon

Slogging through the science and history, sex and paranoia that crowd Thomas Pynchon's cartoonish new novel, it's obvious his disciples now write better Big Idea novels than he does. 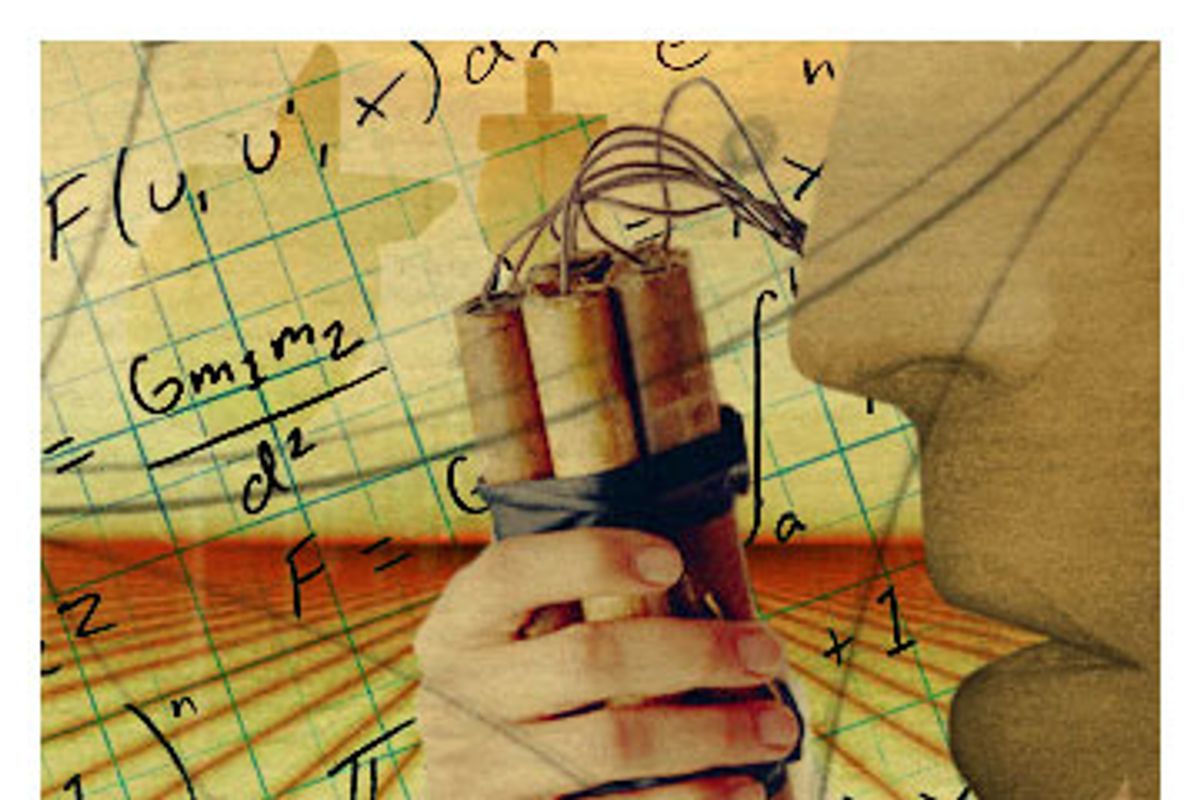 One of the seldom-mentioned dangers of having a long, storied and influential career as a novelist is the increasing likelihood that a master will live to see his pupils surpass him. Sure enough, slogging through the underbrush of the vast and quintessentially Pynchonian new Thomas Pynchon novel, "Against the Day," it's hard not to think, almost with the turning of every page, of all the other writers who now do this better. The book is titanic, crammed with characters and events both historical and fantastic, a blend of both fuck-you braininess (yes, there are equations) and puerile humor, diverted by both exegeses on science or politics and passages of swashbuckling adventure. It's that kind of novel; you know the type.

The action, much of it fairly pointless, takes place over a 30-or-so-year span between the 1893 Chicago World's Fair and just after the First World War. It centers around the three sons of Webb Traverse, a Colorado union "organizer" (his political activities seem to consist entirely of blowing things -- and presumably people -- up) who is brutally killed by a couple of thugs hired by an industrialist named Scarsdale Vibe. The Traverse boys -- Frank, Reef and Kit -- spend most of the book drifting in and out of a purposeful determination to avenge their father's murder. Dropping in (literally) every now and then are a troupe of pubescent boy balloonists called the Chums of Chance, whose exploits fighting "the Yellow Fang" and other antagonists are also recorded in a series of "boys' own" pulp novels that the other characters occasionally read.

Like Pynchon's previous novel, "Mason & Dixon," "Against the Day" doesn't really start to cohere until a point so far into the book that all but the most fanatical acolyte (and there are plenty of those, of course) will have given up and wandered off. "Mason & Dixon" doesn't become an actual novel until about page 250; with "Against the Day," it takes more like 400 pages. Unlike "Mason & Dixon," which does finally deepen and solidify into a consideration of the original sins of both America and the Enlightenment, "Against the Day" eventually wobbles out of focus again, leaving the diligent reader with a grab bag of themes to consider. The novel is partly, like "Mason & Dixon," about the corruption, by the conniving of the powerful, of the pure human impulse toward adventure and discovery. "Say, I'm in the wrong business!" a theoretical mathematician remarks when a sleek arms dealer describes how much money he makes. "No you're not," the arms dealer replies.

That's one of the funnier jokes, and there aren't a lot of those. Much of the humor in "Against the Day" is considerably flabbier. The Chums of Chance (as if that name weren't bad enough) provide the occasion for some of the most lumbering bids for laffs. You see, the Chums are supposed to observe a code of Boy Scout-style purity of mind and body -- but some of them are horny! At one point, the banter between the straightest-arrow Chum and the sassy-lecherous Chum became so painful that I began to wonder if this all wasn't just a parody of a lame parody of a form of pop culture so dated that hardly anyone remembers it well enough to parody it. But then I realized that even Pynchon isn't that convolutedly ironic and it was just bad.

Which is not to say that there isn't some fine writing in "Against the Day" -- a hallucinatory bit depicting a method of traveling through sand, under the surface of the desert as if it were the ocean, and the flight of two fugitives through the Balkan Mountains in winter are two standouts -- but for most readers not enough of it is good enough to make up for all the parts that aren't especially vivid. To get to either of those tours de force, you will first have to read about 68 monotonous descriptions of one or another of the Traverse boys (it hardly matters which) walking into a bar, saloon, cantina, casino, etc., filled with "desperados," "disreputables," "notoriously unprincipled gents," "adventuresses," "pigeons," "sharpers," etc. -- all of it related with what the narrator apparently, but mistakenly, believes to be a jaunty, rakish charm.

Admittedly, "Mason & Dixon," with its faux-18th-century diction, could also be trying, but at the heart of that novel were two characters who approximated actual human beings. What the uniformly young, attractive and randy characters of "Against the Day" approximate is more like the cast of "The OC." When we talk about "Against the Day," we must talk about themes and prose set-pieces and the handfuls of intellectual and historical spangles (The Riemann Hypothesis! The Great Game! Theosophy!) tossed into the mix because the novel doesn't really have characters -- and strange to say about a book with so much happening in it -- or much of a plot, either. But then, the two elements are related, since when you don't care about (or, for that matter, can barely distinguish) the characters, it's also hard to care what happens to them.

Naturally, there are all sorts of superpersonal issues in play. There's a great deal of portentousness about the coming of World War I, and a lot of pre-quantum woo-woo physics about alternate universes, refracted light, the elasticity of time and bilocation (being in two places at once), but that doesn't effectively play out in the characters' lives. They head out on preposterous missions, get embroiled in assorted unfathomable conspiracies and engage in frequent, energetic but trivial sex without the nature of time-space or the coming geopolitical catastrophe figuring into it in any meaningful way.

Part of the problem lies in a conflict between Pynchon's would-be populism and the gnomic, smarty-pants style of fiction he practically invented. In his ethos, the brave, heroic, decent individual is pitted against merciless institutions, systems and elites (he's got a thing about Ivy Leaguers) that openly or covertly run the world. (He's also prone to personifying those systems, hence the mustache-twirling villainy of Scarsdale Vibe.) That's the essence of Pynchonian paranoia, but the rub is that Pynchon's heroes (in this novel, at least) aren't paranoid. True understanding is reserved for the author -- or dedicated reader -- who's capable of grasping the "secret" knowledge of how the world really works. It's no coincidence that the character in "Against the Day" who most resembles an actual reflective human being (and presumably the one the author most identifies with) winds up as an initiate in a quasi-gnostic religious order. Most Pynchon protagonists, however, would never read Pynchon novels, let alone worship the man who writes them. They are men of action, not men of sitting around thinking up crackpot theories about the Tunguska event.

At the heart of all this is a romantic delusion, namely a keen nostalgia for the heyday of 1960s counterculture, which as we know from "Vineland" was single-handedly destroyed by Richard Nixon. The good guys in "Against the Day" are anarchists, just about the only revolutionary persuasion compatible with Pynchon's notion of virtuous political behavior -- that is, hanging out in dives, doing drugs, screwing, and bickering about which head of state ought to be assassinated first. Although, to his credit, Pynchon is intelligent enough to know that this dream is jejune, he cannot give it up, and so he makes the Earth of "Against the Day" haunted by the apparition of a lost paradise, the fabled Shambhala, "a convergence of gardens, silks, music -- fertile, tolerant and compassionate. No one went hungry, all shared in the blessing of an oasis that would never run dry." Eventually, he relocates this magical utopia to the sky, where the Chums of Chance, those embodiments of callow idealism, carry on with what can never actually be achieved on this planet.

Maybe this would be sufficient, if by now we didn't have, say, a writer like David Foster Wallace, who can give us a novel every bit as antic and intellectually demanding as "Against the Day," and can also populate it with believable people whose fates not only interest but break our hearts. It's already the tenth anniversary of "Infinite Jest," the novel that applied the encyclopedic, cerebral approach of "Gravity's Rainbow" to the territory where most of us experience the knock-down, drag-out struggles of modern life: the interior of the human psyche. Or, take a writer like Neal Stephenson, whose grasp of the systems that fascinate Pynchon -- science, capitalism, religion, politics, technology -- is surer, more nuanced, more adult and inevitably yields more insight into how those systems work than Pynchon offers here.

The bar is higher now, and it's not quite enough to sketch a dozen or so characters without trying to make them breathe in a novel that raises Big Questions and then just leaves them dangling. Time doesn't exist, but it crushes us anyway; everyone could see World War I coming, but no one could stop it -- those are two weighty paradoxes that hover over the action in "Against the Day" without truly engaging with it. This is the stuff of tragedy, but since the people it sort of happens to are flimsy constructions, we don't experience it as tragic. We just watch Pynchon point to it like bystanders watching the Chums of Chance's airship float by overhead.