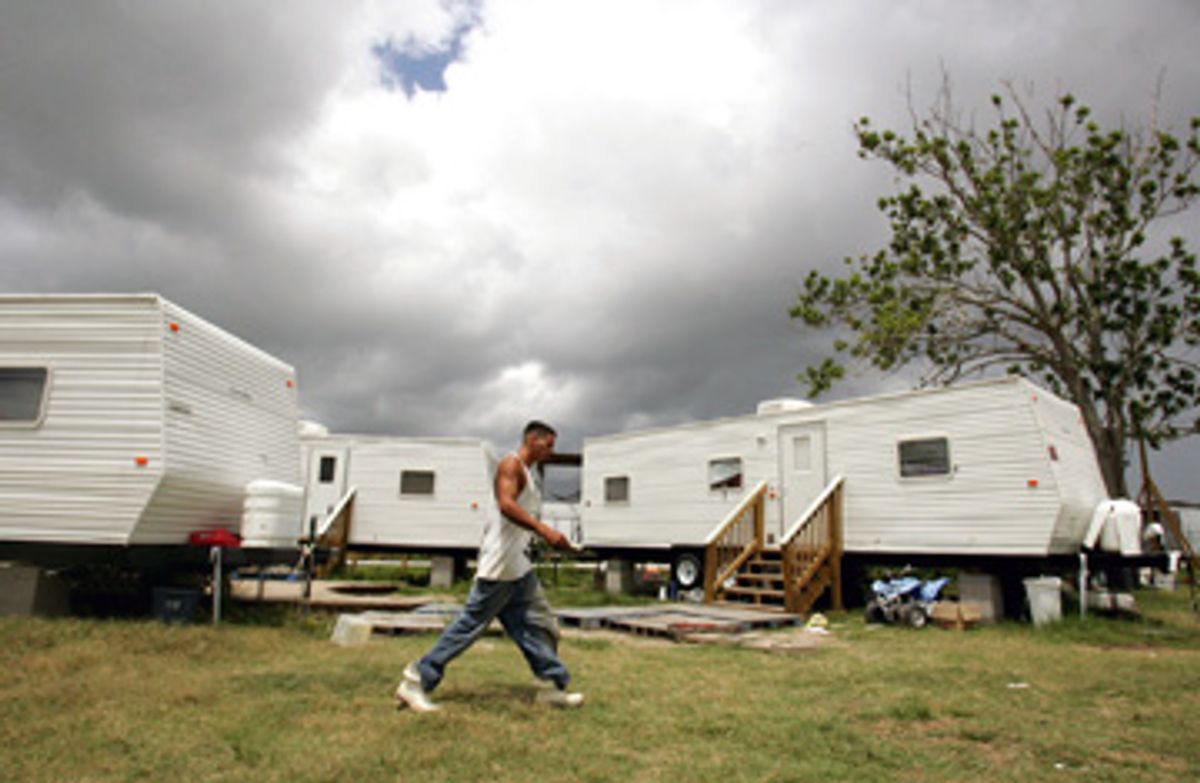 Last summer, the Federal Emergency Management Agency was publicly shamed when lawmakers revealed the agency, to avoid lawsuits, put off testing trailers used to house Hurricane Katrina victims for formaldehyde, a toxic chemical. Now, documents obtained by Salon show that FEMA also pressured scientists to water down a report on the health risks of formaldehyde. FEMA officials instructed the scientists to omit any references to cancer or other long-term health risks from exposure to formaldehyde in FEMA trailers.

In a scathing letter sent today to Dr. Howard Frumkin, chief of the National Center for Environmental Health/Agency for Toxic Substances and Disease Registry, Reps. Brad Miller, chairman of the House Science and Technology Committee's Subcommittee on Investigations and Oversight, and Nick Lampson, chairman of the Subcommittee on Energy and Environment, wrote, "you appear to have been complicit in giving FEMA precisely what they wanted ... However what FEMA wanted and what you approved giving them was not the whole truth regarding formaldehyde. It was not based on 'best science,' nor did it provide 'trusted health information' to the Katrina survivors." FEMA and ATSDR officials are expected to testify Tuesday before the House Committee on Homeland Security, which is also investigating the matter.

After Hurricane Katrina, FEMA placed tens of thousands of displaced families in travel trailers, more than 40,000 of which are still in use. Almost immediately, hundreds of families called FEMA to complain of illnesses, from breathing difficulties, bloody noses and rashes to more serious problems, and even deaths, possibly connected to high levels of formaldehyde gas permeating the trailers. Formaldehyde is a nearly colorless gas with a pungent, irritating odor even at low levels. It is used in many products and manufacturing procedures, notably as an adhesive in plywood used to make trailers. Health reports reveal that exposure to formaldehyde can impact fertility and the developing fetus, leading to spontaneous abortion or physical malformations.

In May 2006, FEMA asked ATSDR to compose a "health consultation" on the FEMA trailers. Dr. Christopher De Rosa, chief of toxicology for ATSDR, told FEMA that any report on health risks of exposure to formaldehyde would have to include information on the risk of cancer and other potential long-term problems. At that point, De Rosa was cut out of the loop. Internal ATSDR documents show that FEMA contacted two of De Rosa's staffers, who then prepared the misleading consultation. When, nine months later, De Rosa learned ATSDR had omitted the key health information in its advisory, he drafted a letter to FEMA trial attorney Patrick Edward Preston.

"I am concerned that this health consultation is incomplete and perhaps misleading," De Rosa wrote. "Formaldehyde is classified as 'reasonably anticipated to be a human carcinogen.' As such, there is no recognized 'safe level' of exposure. Thus, any level of exposure to formaldehyde may pose a cancer risk, regardless of duration. Failure to communicate this issue is possibly misleading, and a threat to public health."

De Rosa also wrote to Frumkin, noting "FEMA's initial contact came directly to me nine months ago on this issue." "I reviewed the proposed statement and specified that they had neglected to address longer term risk including cancer." After eight months of tense negotiations, a revised report included references to the potentially harmful effects of formaldehyde. But other health information, including the likelihood of other toxic gases, such as toluene, being present, was omitted, as was De Rosa's insistence that ATSDR call for the government to take immediate action to end formaldehyde exposure to trailer residents and monitor them for long-term harmful effects. Records show that following his protests, De Rosa in October 2007 was "reassigned" out of his long-term post as director of ATSDR's divison of toxicology and environmental medicine. De Rosa was not available for comment.

In their letter to Frumkin, the lawmakers wrote, "Yet, even after you were specifically told about the scientifically flawed and potentially misleading information in this report and apparently agreed that it should be amended, your agency did not revise this Health Consultation until seven months later in October 2007. Your lack of urgency in this matter is remarkable." A call to Frumkin's office was not returned.

In an equally contemptuous letter to Michael Chertoff, who, as head of Homeland Security, oversees FEMA, the lawmakers accused the agency of perverting ATSDR's mission to provide independent health consultations. "Despite that mission, FEMA insisted that ATSDR produce a report that would meet FEMA's legal and policy goals, not the public health issues of the residents -- some of them ill -- of those trailers. Incredibly, ATSDR obliged. As a result, ATSDR stands discredited ... We have no confidence that the new testing protocols and sampling design agreed to by FEMA and ATSDR for the current testing are any more trustworthy than the previous one."

FEMA spokesman James McIntyre acknowledged that the agency did not call for data on long-term effects. In a statement, he wrote: "This agency has and continues to take responsible steps to address formaldehyde in its direct housing units. FEMA has been proactive in reviewing the situation, has recommended a wide range of actions to travel trailer residents that reduce health risks, and has been working with experts to better understand the health environment and to investigate additional short and long-term solutions. The health and safety of residents has been and continues to be our primary concern."

In April 2006, the Sierra Club discovered high levels of formaldehyde in the trailers, spurring federal testing. Says Sierra Club spokesman Oliver Bernstein today: "At this point, all we can do is wonder whether FEMA is taking this seriously. Nobody should be living in housing that will make people sick. There are still tens of thousand of people, mostly along the Gulf Coast, still being exposed. It's another example of politics trumping science."

Dr. Heidi Sinclair, medical director of the Children's Health Project, affiliated with Louisiana State University, was frustrated by the eight-month delay in making the correct information available. "If people had known about the possible long-term consequences, perhaps more of them would have made an effort to find more appropriate housing for the families that have been stuck in these FEMA travel trailers for two and a half years," she said. "As people moved out, there hasn't been a system set up to track people. If you are worried about the long-term possible consequences, it would have been nice, before people moved out, to create a database to track the long-term health of families that stayed there for an extended period of time. It's going to be much harder now to track people down."

Sheila Kaplan is an investigative reporter and television producer who divides her time between Washington, D.C. and Los Altos, Calif.