A sympathetic new book about the family member everyone loves to hate suggests even the best stepmoms in the world are set up to fail miserably. 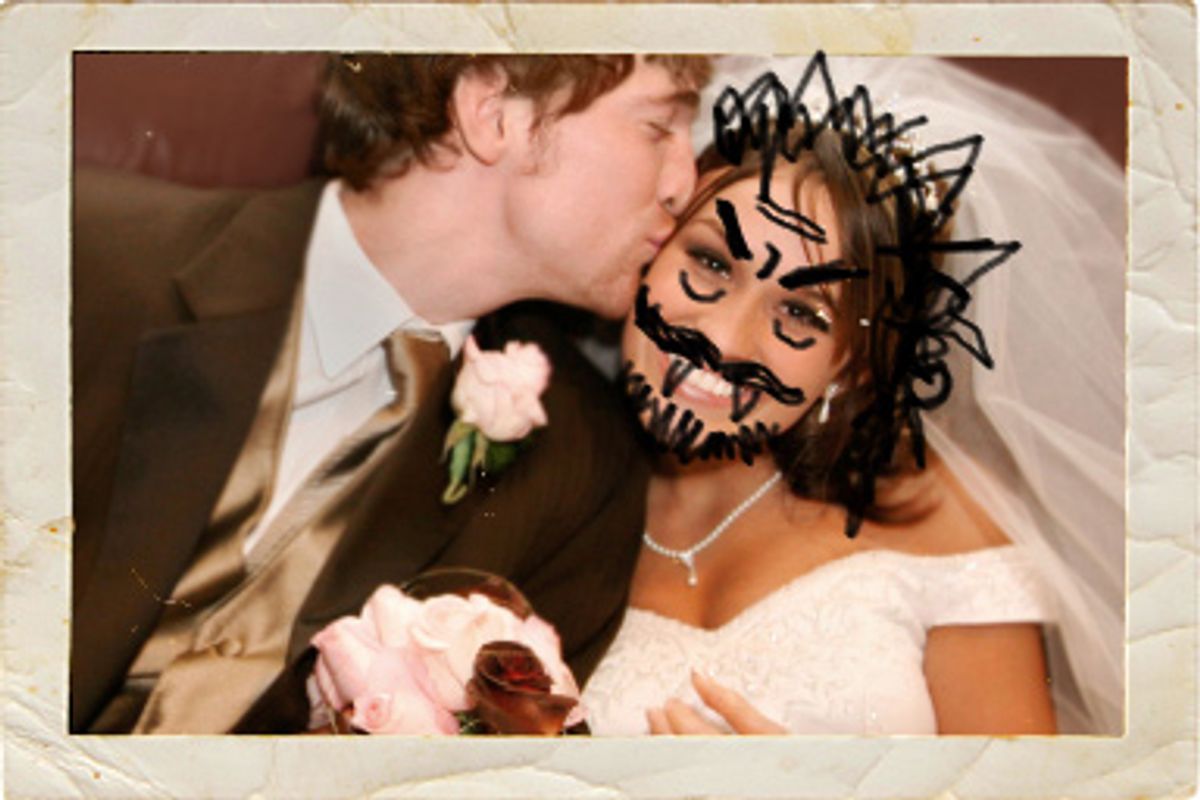 At my wedding three years ago, my then-9-year-old stepson started the Wedding March on his keyboard -- "Here comes the bride, all dressed in white!"-- then moved quickly into the Imperial March (aka Darth Vader's Theme) from "Star Wars" -- DUM DUM DUM, dum DA dum, dum DA dum!

We planned it that way, not just to get my stepson involved in our ceremony, but also to acknowledge his natural ambivalence about our union -- and about me, his stepmother. After all, nobody wants a stepmother.

Of course at the time, I assumed I'd rise above the negative stereotypes. After all, kids usually liked me, and I wasn't stupid enough to start bossing him around. Hadn't we gotten along exceptionally well from the start? Plus, we had a lot in common: We both loved rewatching the "Star Wars" trilogy for the 50 millionth time, playing Monopoly, and eating bowls of ice cream bigger than our heads.

Despite such auspicious beginnings, our new family encountered more rough spots in the road than I could have anticipated. Even though I've taken pains not to pressure or crowd my stepson, even though I've tried to respect his feelings at every turn, even though his mother's breakup with my husband was mutual, my role in my stepson's life has sometimes been confusing, and the two of us have gone full weeks when we've gotten on each other's nerves. Overall, our relationship is far more ambiguous -- and mutually ambivalent -- than I ever imagined it would be on my wedding day.

According to Wednesday Martin's fascinating new book, "Stepmonster: A New Look at Why Real Stepmothers Think, Feel and Act the Way We Do," my experience is far from unusual. Under the best of circumstances, becoming a stepmother can be difficult. Under the worst of circumstances, it can be a living hell, one that often doesn't improve over time, despite the common assumption that it will.

Martin comes at this book armed with plenty of personal experience to back it up: She married a man with two teenage daughters, one of whom lived with him full-time. Despite her efforts to win over both girls, they often rejected her outright, criticized her openly, and sought both overtly and indirectly to drive a wedge between her and her new husband. It worked, too -- Martin found herself furious at her husband for not having her back when trouble arose. But most of all, she felt like a huge failure for the first time in her life. How had all of her good intentions and careful efforts amounted to nothing?

As Martin points out in her informative and carefully researched book, even with a number of circumstances working in your favor -- a husband who supports your feelings, a happily repartnered ex-wife, stepchildren whose ages fall outside of the danger zone for rejecting adults in their lives (ages 10 to 16) -- women who marry men with kids have a long, perilous path ahead of them almost across the board. According to "Stepmonster," "divorce rates are 50 percent higher in remarriages with children than in those without," and research on the subject indicates that most stepmothers will have a difficult time with their new role "certainly in the earliest phases of stepfamily formation and perhaps intermittently for decades."

Martin points out that many stepchildren -- even adult stepchildren -- have negative feelings about their stepmothers that often have nothing whatsoever to do with the women themselves. Although stepmothers are often perceived as "cold" or "controlling," stepchildren are prone to projecting onto them anger at their fathers that they can't express, guilt over their unhappy mothers, and negative feelings about their parents' divorces. Stepchildren are often as put off by generosity and kindness by their stepmoms ("Stop trying to be my mother!") as they are by respectful distance ("You always play favorites with your own kids, while I'm the outsider!"). Whatever decisions a stepmother and father make behind the scenes together, those decisions are often perceived as coming from the stepmother alone. She's taken over the father's life; he's an innocent victim to her scheming. Stepchildren, even when they're adults, often experience stepmothers as having "stolen" their fathers from them. As stepfamily researcher Lucile Duberman once put it, "A stepmother must be exceptional in order to be considered adequate."

But forget stepchildren for a minute: We all have negative assumptions and knee-jerk reactions about stepmothers. When I read my husband a passage from Martin's book about a stepmother whose teenage stepdaughter greeted her daily with the words, "Fuck you. I don't have to listen to anything you say. Get out of my way," my husband responded by asking, "What, was the stepmother really awful or something?"

Martin explains that stepmothers are up against such a strong negative bias that they have trouble getting support from friends or family. Personally, I went into immediate culture shock when I suddenly had a 9-year-old boy in my house. But many of my friends took my mildest, least personal attempts to let off a little steam away from the family ("Man, kids are noisy! And they can talk about Pokémon for three hours straight! It's mind-blowing!") as an opening to issue solemn directives. "Think of things from his perspective!" they'd urge me, as if I weren't already consumed by understanding him and keeping him happy. Somehow, my status as a stepmother made me suspect straight out of the gate. Remarks that I could easily make about the challenges of raising my own kids were strictly forbidden in relation to my stepson.

As Martin's book emphasizes, most people's advice to stepmothers -- Be nicer! Think of everything from the kid's perspective! Suck it up, you chose this! -- while understandable from the outside looking in, really, truly doesn't help. The truth is that many stepmothers work so hard to "be nicer" that they lose their footing in the family and their needs become subordinated to the greater good, often until they feel like ghosts in their own homes.

Even something as small as getting sick can make you feel guilty when you have a stepkid. When I had a bad fever a few weeks ago and my husband had to stay home to help with our toddler and baby instead of taking his son to a movie, I felt so guilty that I tried to make them go to the movie anyway. I never would've felt so bad had it been my own kids, because I would've felt comfortable telling them: "Look, sometimes people get sick and it changes everyone's plans. Get used to it." (This is what my husband told my stepson.) But there's something so awful about being the cause of any negative experience for your stepkid, even when it's beyond your control. If you take your stepkid's perspective into account at all, you know that you're perceived as a negative force in his or her life when you're being nothing but kind and generous. That makes the times when you are the cause of his or her misfortune all the more unbearable, even when it's both unintentional and unavoidable.

The deep inner conflicts that come with trying to handle children who aren't our own, when mixed with a lack of empathy from otherwise supportive friends and family, can add up to an uneasy situation. "The lack of control over how we are perceived and what society thinks of us can be frustrating, painful and destructive," Martin writes. "We hear that we are wicked, and we are prone to believe it, especially when the rigors of taking on life with a man with children bring out, as they sometimes inevitably will, the worst in us." It's no wonder that stepmothers often struggle with depression and low self-esteem, and their marriages tend to suffer for it.

So what's a well-meaning but flawed stepmother to do? Martin points to many stepfamily experts who advocate for abandoning an overly child-centric view of how the new family should function. Not surprisingly, when everyone -- stepmom, dad, mom -- struggles to please the children first and foremost, the kids end up confused, petulant and overly entitled, a situation that doesn't help them to form healthy boundaries over the long haul. Dr. Andrew Gotzis, a New York psychiatrist and therapist, tells Martin, "The kids need to know that the husband and wife (stepmother) come first and that they are a unified team."

Martin also advises families to forget the idealized "blended" label and try not to do everything together all the time, "in spite of your urge to be the Waltons." Emphasis on activities with dad and stepchild or stepmom and stepchild tend to strengthen individual relationships instead of feeding into a group dynamic that is, by nature, imperfect and confusing.

But most of all, women who become stepmoms should seek out support and validation of their feelings among those who understand. Patricia Papernow of the National Stepfamily Resource Center tells Martin that, "Learning that stepfamilies do fight and that there are insider/outsider positions in the stepfamily or that it's normal to dislike your stepchildren, for example, can make something that feels like a terrible personal failure feel normal."

When my stepson broke into Darth Vader's Theme at my wedding, everyone laughed because we all agree: Having a stepmother is hard. But, as Martin's book points out, being a stepmother is hard, too, for plenty of reasons that most of us don't feel comfortable expressing. While the world tells you to "suck it up and deal" and treats you like you're a bad person if you have the smallest complaint, the truth is that even with the strongest commitment to being the most understanding, fun-loving stepmom in the universe, actually playing the role of a self-assured, kind, accepting parent to kids who aren't yours can be beyond challenging. Accepting that (instead of being angry at yourself and your family for the ways you fall short) is perhaps the most important prerequisite for forming a (relatively) happy stepfamily.

Luckily, as my stepson approaches his teen years, we have more in common than ever before: We're both moody, exhausted and hungry all the time, we both love making fun of how bad my husband is at Monopoly, and we both admit that, on bad days, he can be as melodramatic and whiny as Luke Skywalker, and I can be as dark and bossy as Darth Vader. That wasn't exactly the vision I had in mind on my wedding day, but at least we both agree.