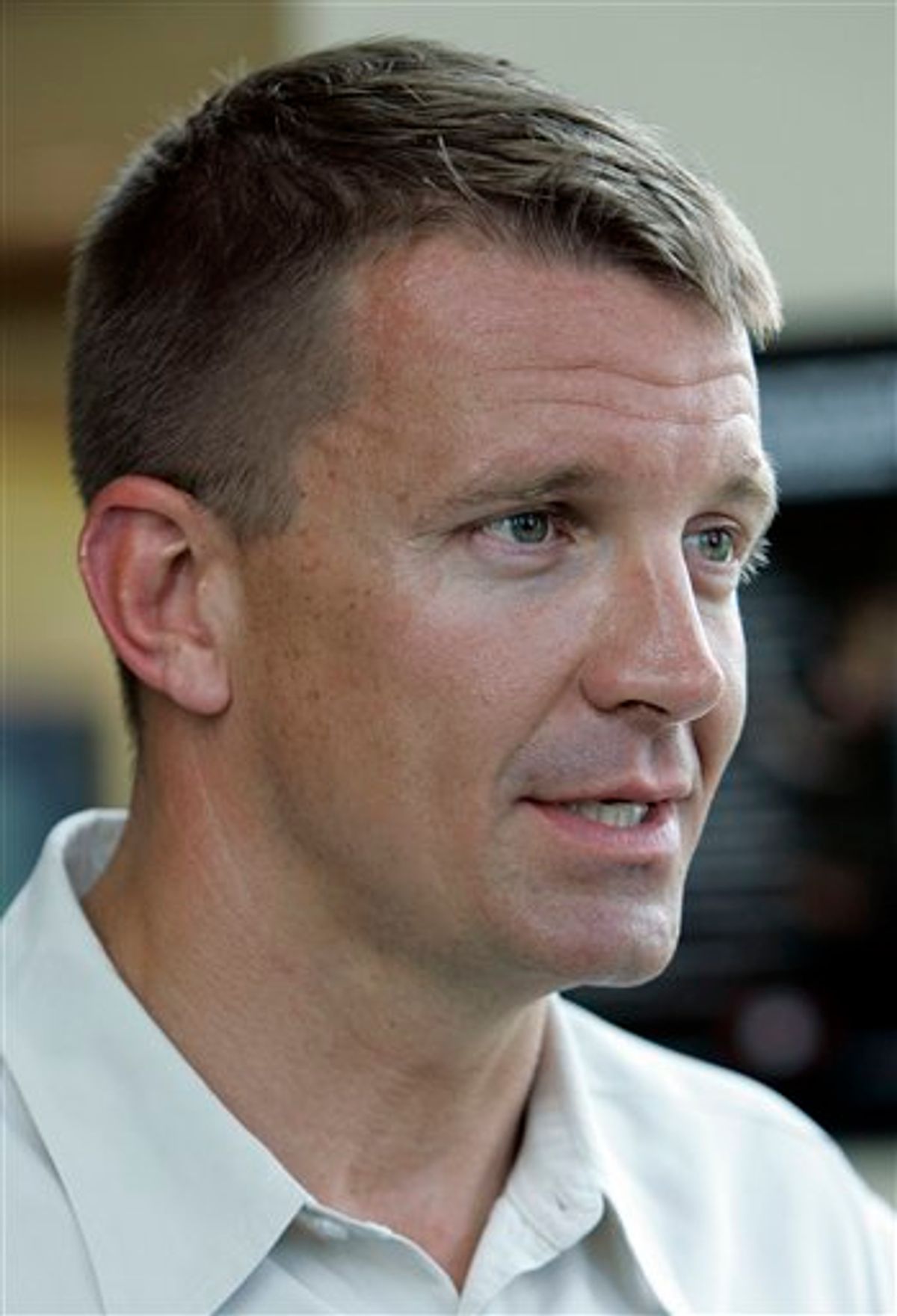 Erik Prince, whose former company Blackwater Worldwide became synonymous with the use of private U.S. security forces in Iraq and Afghanistan, has quietly taken on a new role in helping to train troops in lawless Somalia.

Prince is involved in a multimillion-dollar program financed by several Arab countries, including the United Arab Emirates, to mobilize some 2,000 Somali recruits to fight pirates who are terrorizing the African coast, according to a person familiar with the project and an intelligence report seen by The Associated Press.

Prince's name has surfaced in the Somalia conflict amid the debate over how private security forces should be used in some of the world's most dangerous spots. Blackwater, now known as Xe Services, became a symbol in Washington of contractors run amok after a series of incidents, including one in 2007 in which its guards were charged with killing 14 civilians in the Iraqi capital.

Though Somali pirates have seized ships flying under various flags, most governments are reluctant to send ground troops to wipe out pirate havens in a nation that has been in near-anarchy for two decades and whose weak U.N.-backed administration is confined to a few neighborhoods of the capital. The forces now being trained are intended to help fill that void. They will also go after a warlord linked to Islamist insurgents, one official said.

In response to requests for an interview with Prince, his spokesman e-mailed a brief statement that the Blackwater founder is interested in "helping Somalia overcome the scourge of piracy" and has advised antipiracy efforts. Spokesman Mark Corallo said Prince has "no financial role" in the project and declined to answer any questions about Prince's involvement.

Prince's role revives questions about the use of military contractors. Critics say it could undercut the international community's effort to train and fund Somali forces to fight al-Qaida-linked Islamist insurgents.

The European Union is training about 2,000 Somali soldiers with U.S. support, and an African Union force of 8,000 Ugandan and Burundian peacekeepers is propping up the government.

By introducing contractors, "You could see the privatization of war, with very little accountability to the international community," said E.J. Hogendoorn, a Nairobi-based analyst with the International Crisis Group think tank. "Who are these private companies accountable to and what prevents them from changing clients when it's convenient for them?"

Although Hogendoorn's concerns are shared by some U.S. officials, the director of one private security company welcomed the effort and Prince's involvement.

"There are 34 nations with naval assets trying to stop piracy and it can only be stopped on land," said John Burnett, director of Maritime Underwater Security Consultants. "With Prince's background and rather illustrious reputation, I think it's quite possible that it might work."

Prince, now based in the United Arab Emirates, is no longer with Blackwater. He has stoutly defended the company, telling Vanity Fair magazine that "when it became politically expedient to do so, someone threw me under the bus."

Last month, the AP reported that the Somalia project encompassed training a 1,000-man antipiracy force in Somalia's northern semiautonomous region of Puntland and presidential guards in Mogadishu, the ruined seaside capital. The story identified Saracen International, a private security company, as being involved, along with a former U.S. ambassador, Pierre Prosper; a senior ex-CIA officer, Michael Shanklin; and an unidentified Muslim donor nation. Prosper and Shanklin confirmed they were working as advisers to the Somali government.

Since then, AP has learned from officials and documents that Prince is involved and that a second 1,000-man antipiracy force is planned for Mogadishu, where insurgents battle poorly equipped government forces.

Lafras Luitingh, the chief operating officer of Beirut-registered Saracen International, said the company had sought to keep the project secret to surprise the pirates. He said his company signed a contract with the Somali government in March. He declined to say whether Prince was involved in the project and said he was not part of Saracen.

Since the signing, a new Somali government has taken office and has appointed a panel to investigate the Saracen deal and others, said Minister of Information Abdulkareem Jama. He said he had not been aware of Prince's involvement. Separately, the U.N. is quietly investigating whether the Somalia projects have broken the blanket embargo on arms supplies to Somali factions.

The money is moving through a web of international companies, the addresses of which didn't always check out when the AP sought to verify them.

There are at least three Saracens -- the one registered in Lebanon, and two run by Luitingh's business partner and based in Uganda, where government office employees told the AP the registration papers have disappeared. An AP reporter in Beirut could not find the address Luitingh's company provided in the Somali contract. Lebanese authorities had no address listed for Saracen in Lebanon and said it is based in the United Arab Emirates.

Afloat Leasing, which owns two ships that have been working with Saracen, said it was Liberian-registered, but an AP reporter didn't find it at the address given or in Liberian records.

The force's mission may be more than just curbing piracy.

A former U.S. government official, speaking on condition of anonymity because he isn't authorized to talk to the media, said that besides targeting pirates, the new force in Puntland will go after a warlord who allegedly supplies weapons to al-Shabab, Somalia's most feared insurgent group. Luitingh said he had never heard of such a plan.

Luitingh was a founding member of Executive Outcomes, a controversial South African mercenary outfit linked in the 1990s to conflicts in Sierra Leone, Angola and as far away as Papua New Guinea.

He said Saracen will ensure it does not recruit child soldiers, will pay recruits regularly, and will be legally answerable to the Somali government. One group of 150 recruits finished training in November in Puntland and a second batch will soon complete the training course there. Training has not yet begun in Mogadishu.

Saracen has declined to disclose the source of its financing. A person familiar with the project, insisting on anonymity because he is not authorized to speak to the media, said Prince is overseeing the antipiracy training.

The intelligence report, in which the United Arab Emirates was identified as a funder and Prince as a participant, was given to the AP on condition its author and agency not be disclosed because the document was confidential. Several Western security officials said in interviews that those findings were trustworthy.

Pirates use long stretches of Somali coastline as a base to prey on busy shipping lanes in the Gulf of Aden and the Indian Ocean. Al-Shabab controls most of south and central Somalia and much of Mogadishu. Western governments fear Somalia could be used as a base for attacks on the West.

Some American officials worry that the Saracen projects encourage the idea that more guns and money -- rather than better governance and transparent defense training -- can defeat the insurgency. The Somali army has been weakened by defections because a series of corrupt administrations has been incapable of paying its soldiers.

The Somalis being trained by the European Union are supposed to earn $100 a month. A U.S. official, who spoke on condition of anonymity due to restrictions on talking to the media, said Saracen is offering $300 a month during training and $500 a month after graduation.

That could lure the best trained people away from the Somali army, the U.S. official said, and lessen the burden on the government to follow higher standards.

Many nations, including the Gulf states, have offered Somalia assistance. Several Arab nations who gave cash then found that the money could not be accounted for, said Hogendoorn, the Somalia analyst. That could be one reason for Arab rulers to support the Saracen project, he said.