The would-be GOP leader blames his serial adultery on patriotism, says God will forgive him. Will voters? 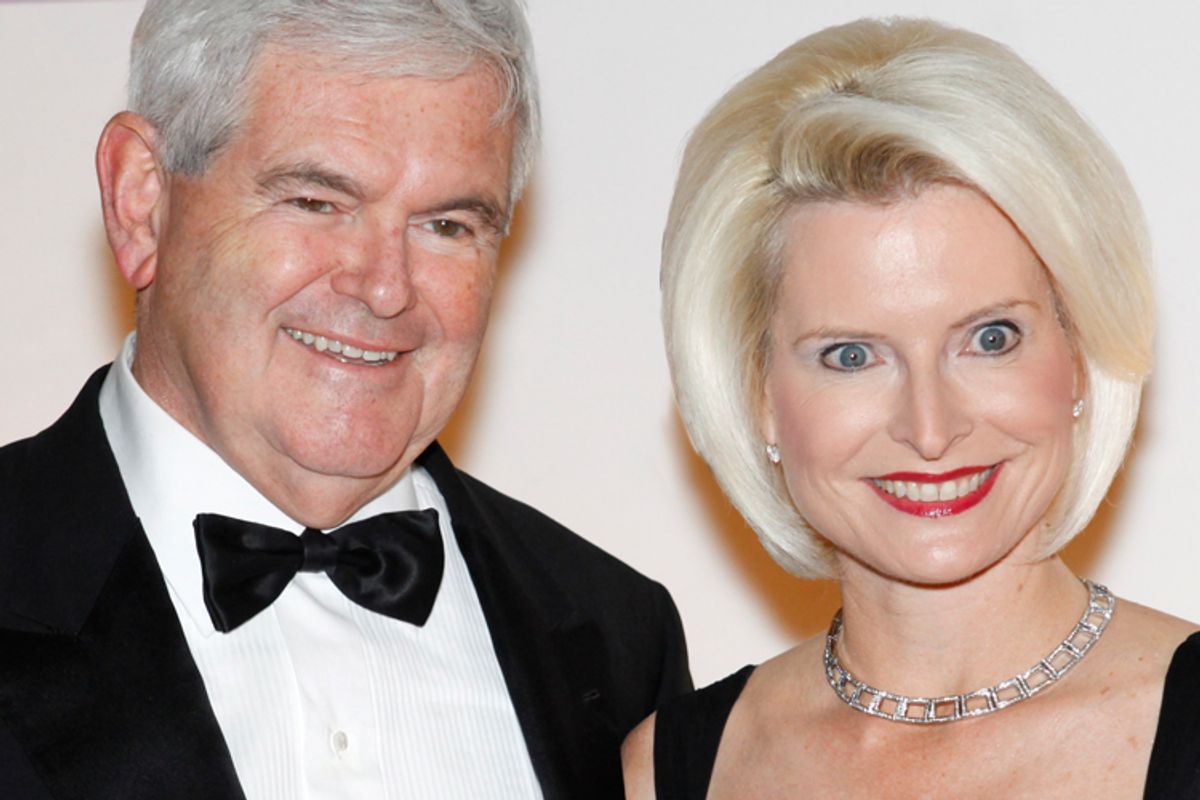 It's a good thing Newt Gingrich believes in a forgiving God, because he needs so much forgiving. He cheated on, and then abandoned, not just one sick wife, but two. His first wife got Gingrich's final word on their divorce in the hospital, while recovering from cancer surgery; he then married his mistress. Esquire revealed last September that the mistress turned second wife, Marianne Gingrich, learned about Newt's infidelity with a young staffer just after Marianne was diagnosed with multiple sclerosis.

Now he's telling Christian Broadcast Network's David Brody that he betrayed two wives because he cared so darn much about his country.

There’s no question at times of my life, partially driven by how passionately I felt about this country, that I worked far too hard and things happened in my life that were not appropriate. And what I can tell you is that when I did things that were wrong, I wasn’t trapped in situation ethics, I was doing things that were wrong, and yet, I was doing them. I found that I felt compelled to seek God’s forgiveness. Not God’s understanding, but God’s forgiveness. I do believe in a forgiving God. And I think most people, deep down in their hearts hope there’s a forgiving God. Somebody once said that when we’re young, we seek justice, but as we get older, we seek mercy. There’s something to that, I think.

What a hypocrite. Does anyone see evidence that Gingrich believes in a forgiving God or a God of mercy when it comes to anyone but him? As someone raised Catholic, I found another fact about Gingrich's second divorce particularly appalling: Although the Catholic Church forbids divorce, and prohibits divorced Catholics from remarrying, Gingrich actually got the church to "annul" his marriage to Marianne Gingrich, so he could marry mistress Callista Bisek, who is Catholic. And this was before Gingrich himself had even converted to Catholicism. I believe in a forgiving God, too, but the way the church hands out annulments to rich, powerful men -- Rudy Giuliani and Joe Kennedy, to name two others -- has always been a little unsettling to me.

The same day as the CBN interview, Mr. Mercy, the author of "To Save America: Stopping Obama's Secular-Socialist Machine," told an Iowa faith forum that "the secular, socialist people around Obama ... do not understand America, cannot possibly represent America." Later he seemed to tell CBN that the president and his administration are just as dangerous as "radical Islamists," insisting:

Will God forgive Gingrich for lying about his political adversaries that way, and comparing them to murdering terrorists? He'll find out, eventually. I'll be talking about Gingrich's latest hypocrisy on MSNBC's "Hardball" today.