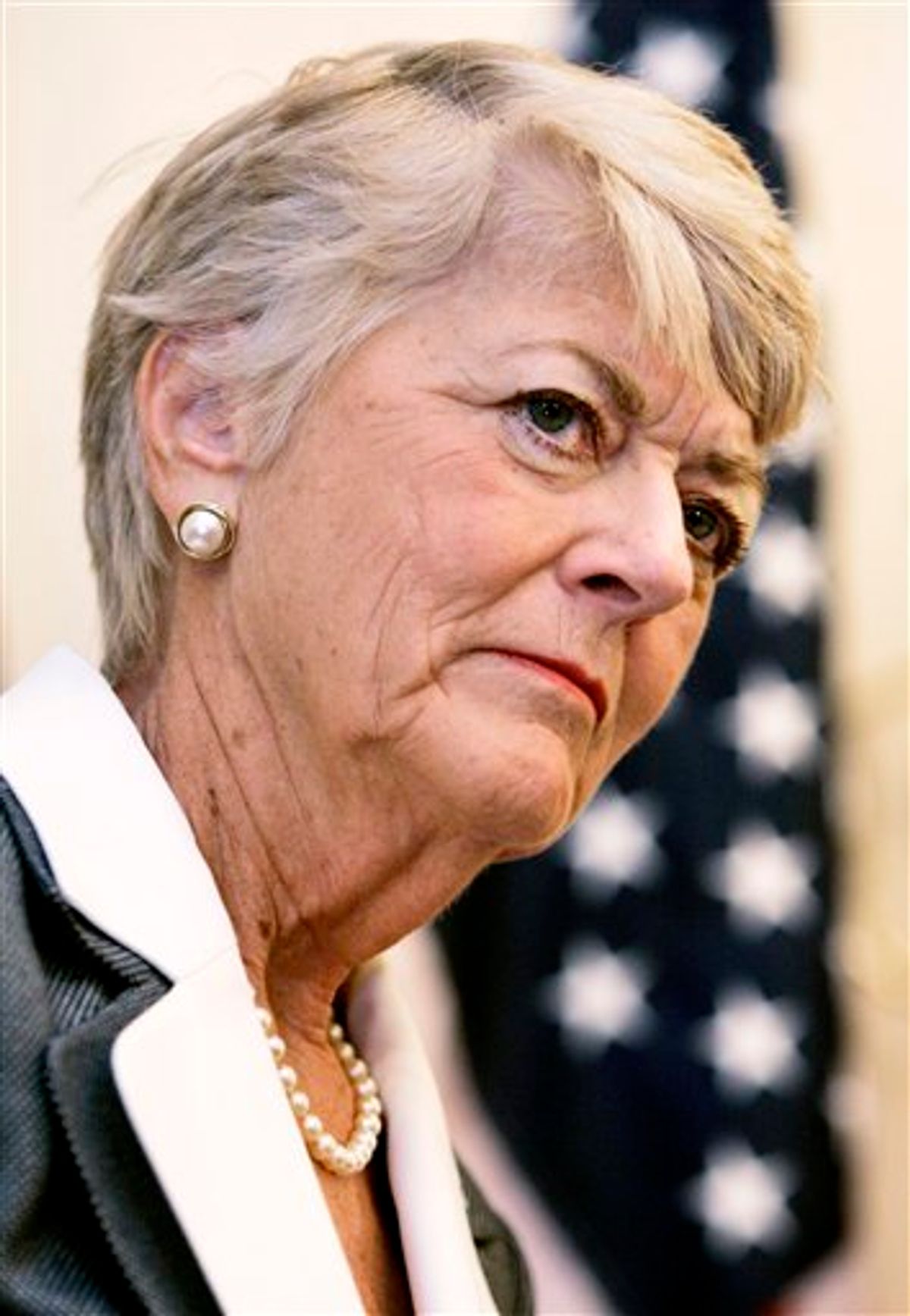 Geraldine Ferraro will be deservedly remembered in history as a pioneer, the first woman ever to run on a major party’s national ticket. But the 27 years of her life that followed her most famous achievement are testament to how arbitrary and cruel the world of politics can be.

Generally, defeated vice presidential candidates are automatically considered prime contenders for their party's next open presidential nomination: Sarah Palin after 2008, John Edwards after 2004, Joe Lieberman after 2000, and so on. Even Jack Kemp, his political career briefly resurrected when Bob Dole unexpectedly added him to the Republican ticket in August 1996, was talked up as a 2000 prospect after that campaign -- even if his dull performance on the campaign trail soured many Republicans on the idea of making him a future standard-bearer.

But that's not how Ferraro’s story went.

After she and Walter Mondale suffered their epic defeat in November 1984, virtually every prominent and half-prominent Democrat in America was discussed as a potential party savior for 1988, from Ted Kennedy and Gary Hart to Bruce Babbitt and Michael Dukakis. But almost never did the name of the first woman ever to run for vice president on a major party ticket come up.

She'd been a token V.P. selection, the thinking went, an undistinguished three-term congresswoman tapped by a desperate presidential candidate – Fritz Mondale – on the advice of his old Capitol Hill buddy, House Speaker Tip O’Neill. Until the moment Mondale chose her, Ferraro’s ambitions had been limited to the House, where she was planning a long-shot campaign against Richard Gephardt for the fifth-ranking leadership post on the Democratic side. And it’s not like her addition to the ticket had done much good, especially after weeks-long controversy over her husband’s finances that ensured after the convention. She was a gimmick, they sniffed – hardly presidential nominee material.

It was hardly fair: Mondale, after all, was doomed long before he turned to Ferraro. If he’d opted for Henry Cisneros or Dianne Feinstein or even Gary Hart – the man he’d barely edged out in the primaries and didn’t want to put on the ticket – he still would have lost to Ronald Reagan in a rout. That was just the nature of the ’84 campaign: Voters believed the economy was roaring back to life, liked Ronald Reagan personally, and remembered that Mondale had been vice president when things seemed much worse. Moreover, Ferraro had actually been an able public performer on the campaign trail – strong and resilient when the press zeroed in on her husband, and willing to call Vice President George H.W. Bush out to his face for his “patronizing attitude” when he offered during a debate “to let me help you with the difference, Miss Ferraro, between Iran and the embassy in Lebanon.”

But it didn’t matter. When the election was over, Ferraro was tagged a loser -- and she didn’t even have her House seat to retreat to. Her campaign did embolden women to seek a full-fledged candidate of their own for 1988, but it was Pat Schroeder, not Ferraro, who ended up running (and dropping out in the fall of 1987, in a tearful press conference that kicked off a national debate about gender and emotion). Also making the ’88 race was Gephardt, the man Ferraro had once hoped to beat to the Democratic leadership ranks; he ended up faring surprisingly well, winning the Iowa caucuses and finishing second in New Hampshire before flaming out, then returning the House, where he became majority leader in 1989.

Ferraro, meanwhile, returned to New York, suddenly a woman without office. If she wanted to reenter politics, she’d have to do it at the state level, in the unforgiving world of New York politics. The governorship was out of the question: Mario Cuomo was entrenched, and the only way he’d leave would be for the White House. (In a bitter irony, he’d stolen the show at the same ’84 convention that nominated Ferraro and emerged from the ’84 campaign as hot national prospect.) So was one of the state’s Senate seats, held since 1976 by Democrat Daniel Patrick Moynihan.

That left one option: Al D’Amato’s Senate seat, which would be up in 1986. But D’Amato, elected in something of a fluke in 1980, had emerged a surprisingly popular figure. The odds of unseating him weren’t good, and for Ferraro, the risk would be great: A defeat in 1986, just two years after the ’84 campaign, could mean permanent exile. She passed, and waited.

Finally, an opportunity came. It was 1992 – nearly a decade after she’d been on the national stage, or any stage for that matter – and D’Amato was running for reelection once again, and this time he was vulnerable. Very vulnerable. Ferraro was now 57 years old. If she was ever going to get back in the game – ever going to play the leading national role that her ’84 campaign had hinted at – this was her time. She entered the Democratic race. But she was hardly alone. Four other Democrats also saw opportunity in D’Amato’s highly public ethical woes: Long Island Rep. Robert Mrazek, New York City Comptroller (and former Rep.) Liz Holtzman, state Attorney General Robert Abrams, and Al Sharpton. Ferraro was the only historic figure in the race, but simply winning the right to represent her party in the fall would be a battle.

Her chief foe, it quickly became clear, would be Abrams, the ambitious four-term A.G. He’d once aspired to the governorship, and had even considered an offer to run as Cuomo’s lieutenant governor candidate in 1986 – on the theory that Cuomo might win the presidency in 1988, then hand the governorship to him. But Abrams couldn’t get Cuomo to confide his ’88 plans and passed on the offer, returning the A.G.’s office and biding his time for the next major opening. By the end of the summer, Mrazek had dropped out and Ferraro led the pack, with Abrams running in second and Holtzman and Sharpton far behind. It was a two-person race, with the others left to play spoiler.

Holtzman took that role to heart, training her guns on Ferraro in the race’s closing weeks with a vicious campaign that challenged the front-runner’s basic honesty and integrity. She also brought back one of the ghosts of the ’84 campaign: The Holtzman camp passed word to reporters that Ferraro’s husband, John Zaccaro, had met with a reputed Mob figure back in 1985. Abrams piled on. It was a tag-team effort, one that ignited old ethnic suspicions and resentments. And when it ended on primary day, Ferraro fell just short, upset by Abrams by a fraction of a point – with Holtzman far, far behind them. Eight years earlier, she’d been a global celebrity; but now, Geraldine Ferraro couldn’t even win a Senate primary.

She did attain a measure of revenge. Because the Democratic base was so divided after the primary, D’Amato was able to overcome his own profound liabilities and defeat Abrams in November – thanks in part to support from Italian-Americans who resented the Abrams-Holtzman assault on Ferraro. And the next year, Ferraro provided an assist in the Democratic primary for New York City comptroller, in which Holtzman was crushed by Alan Hevesi.

But it didn’t change the result of ’92: Ferraro was still a woman without office. After a brief stint as a co-host of CNN’s “Crossfire,” Ferraro took one more shot at politics. It was 1998, and once again D’Amato was vulnerable. She jumped in the race. It was supposed to be simple. She’d emerged from ’92 as a sympathetic figure, the victim of one of the lowest political attacks in recent memory. There was talk that she’d win the Democratic nomination without opposition. This time the party would be united in its effort to oust D’Amato. Her main challenger throughout 1997 was a Brooklyn congressman best known for his aggressive self-promotion, Charles Schumer. He had a deep war chest, but surely, the thinking went, he’d soon come to his senses and retreat to his safe House seat.

Not a chance. Schumer proved a far more aggressive candidate than Ferraro, or Mark Green, the race’s third entrant. He was on the air with television ads early (far earlier than Ferraro), and the money just kept pouring in. Instead of using Abrams’ slash-and-burn tactics, Schumer chipped away at Ferraro’s lead simply by showcasing his energy and policy mastery. For Ferraro fans, the debates could be painful to watch: Schumer had detailed, specific compelling answers to every question asked. Ferraro had platitudes. Schumer had intensity and focus. Ferraro was oddly passive. It seemed obvious: He wanted it more. The primary wasn’t even close: Schumer won by a nearly two-to-one margin. Ferraro didn’t even break 30 percent.

Thus ended her political career. As it turned out, her final victory came in 1982, when she was elected to her third term in the House. From then on, it was all defeat and indignity. Under terrible circumstances, she did manage to gain broad national support in 2001, when she revealed her own struggle with multiple myeloma – the disease that finally claimed her this weekend – and testified before Congress about the need for research. Then, a few years later, she made one last political push, throwing herself into Hillary Clinton’s presidential campaign, which she hoped would fulfill the ultimate promise of her own ’84 campaign. It couldn’t have gone worse. Hillary lost and Ferraro was vilified as a caricature of “ethnic insensitivity.”

Democrats who came of age in the post-impeachment/post-Florida era probably see Geraldine Ferraro as little more than a Fox News Democrat. It’s truly a shame. She deserves so much more than that.