Finally, Rupert Murdoch gets his due 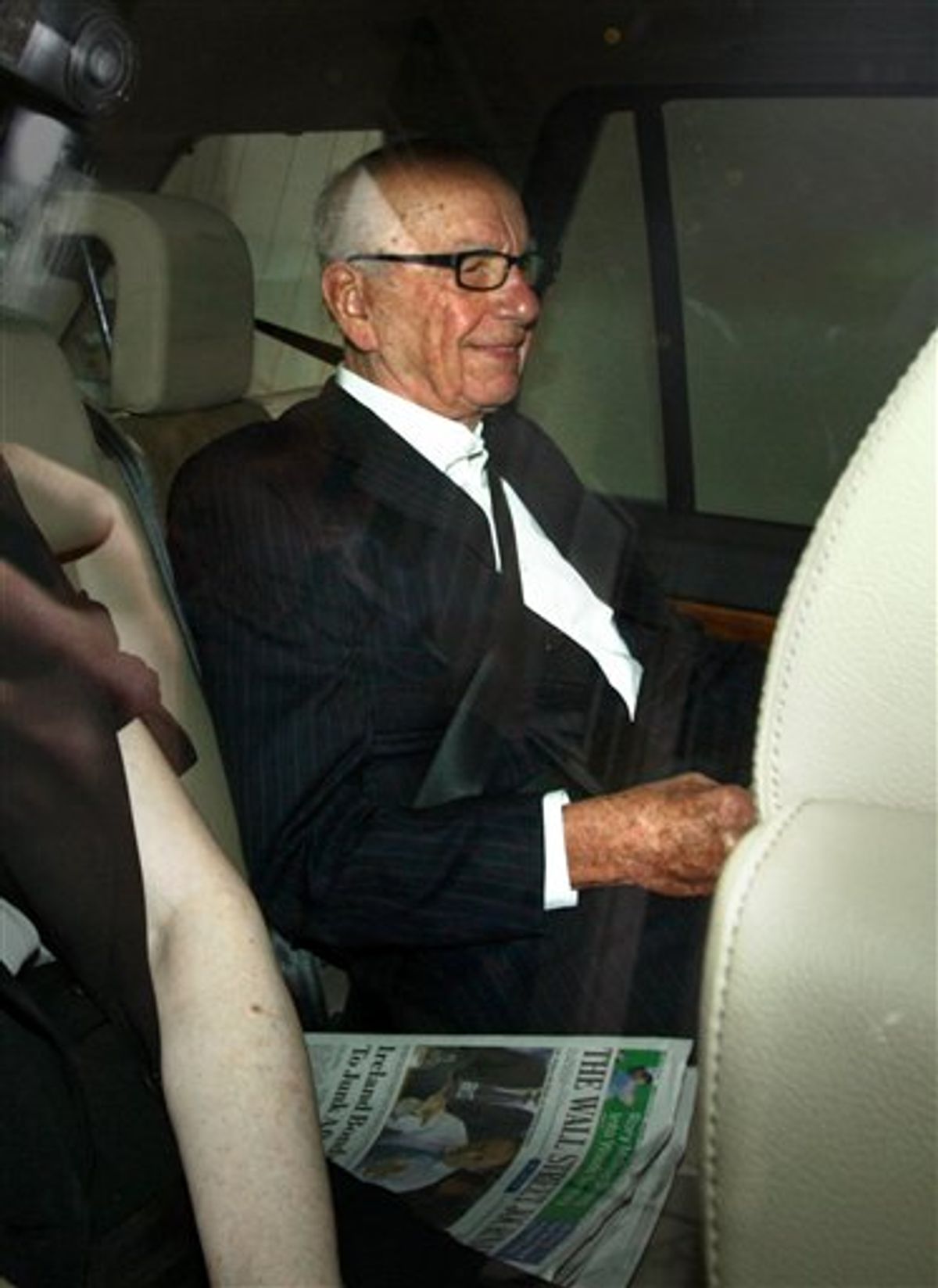 Rupert Murdoch leaves his home in Mayfair, London, as British Prime Minister David Cameron joined demands for the media mogul to drop his BSkyB takeover bid in the wake of the phone-hacking scandal Wednesday July 13, 2011. Britain's House of Commons is poised to demand that Rupert Murdoch give up on his ambition of taking over a lucrative broadcaster while a phone hacking scandal rages around his British newspaper holdings. Cameron has put his party's weight behind an opposition motion up for a vote Wednesday which declares that bidding for full control of British Sky Broadcasting would not be in the national interest. (AP Photo/Steve Parsons) UNITED KINGDOM OUT NO SALES NO ARCHIVE (AP)
--

So here's the synopsis of my forthcoming exposé emulating Evelyn Waugh's novel "Scoop." I conceived it during an email exchange with a French friend who's an expert on the British satirist.

The working title is "Scantily Clad."

A tabloid newspaper hires buxom ladies to "have it off," as the Brits say, with politicians, celebrities, members of the royal family and the Manchester United Football Club. Once done, the editors hire a hitman to kill them off, and a psychic to help Scotland Yard find the bodies -- preferably naked in luxury hotel suites or stately country homes with riding stables and formal gardens.

Is there a serial killer among the aristocrats? Millions of yobbos (working-class folks) demand to know. Enter an intrepid French politician with a hyphenated name to expose the plot by exposing himself to a buxom hotel maid dispatched by the Daily Wank to seduce him...

OK, that's enough. Even if I could write fiction, I couldn't write British fiction. Besides, satire depends upon comic exaggeration, while the deepening scandal involving Rupert Murdoch's News International corporation has far surpassed my puerile imaginings.

After all, prostitutes get bumped off every day in this fallen world. For a newspaper to exploit the families of kidnapped 13-year-old girls, the victims of terrorist attacks, and the families of soldiers killed in Iraq and Afghanistan, however, implies an indifference to human dignity that can only be described as depraved. All that and more was apparently done by Murdoch's now-defunct News of the World.

News International shuttered the weekly tabloid in a transparent attempt to pretend that executives have been shocked by the transgressions of overzealous staffers.

Meanwhile, the Sun, Murdoch's other London tabloid, obtained the medical records of then Prime Minister Gordon Brown's 4-month-old son. Brown said that he and his wife were "in tears" on learning that their infant's cystic fibrosis would decorate the newspaper's front page.

Brown has accused another Murdoch newspaper, the allegedly respectable Sunday Times, of hiring "known criminals" to rummage through his bank accounts, legal records and tax returns.

"If I," Brown has said, "with all the protection and all the defenses and all the security that a chancellor of the Exchequer or a prime minister, am so vulnerable to unscrupulous tactics, to unlawful tactics, methods that have been used in the way we have found, what about the ordinary citizen?"

So that's lesson one. Privacy in the digital age no longer exists. The more fortunate or, in the case of victims of terrorism or tragedy, the more unfortunate you are, the more your intimate sins and sorrows will be merchandised as infotainment for the rabble.

Perhaps British audiences titillated to hear of Prince Charles' wish to become a tampon shouldn't be so horrified to see innocent crime victims treated as rudely as philandering aristocrats.

After all, Murdoch's minions may have rationalized, what does it matter why somebody's famous? Fame has no rights.

Even more than his fiercely competitive business practices, it's Murdoch's unsparingly cynical view of human nature that's made him the most powerful media mogul in the world. Mass audiences respond to voyeurism: sex, violence, personal tragedy, and racial and political melodrama. And in Great Britain particularly, people yearn to see the mighty humiliated.

Nevertheless, the British are horrified. They're outraged about journalists bribing cops, about interfering in murder investigations, about identity theft, and about hacking thousands of cellphones, even as News International executives assured Parliament that a handful of rogue employees were involved. (News flash: Newspaper staffers can't authorize six-figure payoffs.)

Murdoch's coziness with Tory and Labour politicians alike has become a problem for him and them. See, something else people love is the vicarious pleasure of watching a coverup come undone. News International big shots are face cards, too. Prominent careers will be ruined; powerful people are going to prison.

Meanwhile, notice how studiously everybody in the United States is concentrating on the purely British aspects of the scandal? Murdoch's ruthless; he gets even. Besides, a person could end up working for him.

However, cracks have developed in the transatlantic wall. Already, a former New York cop has said News of the World offered him cash to hack the cells of the 9/11 dead. Les Hinton, the longtime aide that Murdoch placed in charge of the Wall Street Journal, is among those who gave now-inoperative testimony to Parliament in 2007. One bad apple, he said.

Even Roger Cohen, for my money the New York Times' best columnist, defends Murdoch's "visionary, risk-taking determination" even as he deplores the influence of his biggest moneymaker, Fox News. "[With] its shrill right-wing demagoguery masquerading as news," he writes, "[Fox has] made a significant contribution to the polarization of American politics, the erosion of reasoned debate, the debunking of reason itself, and the ensuing Washington paralysis."

Apart from having the moral imagination of a water moccasin, in other words, Rupert Murdoch's just a terrific guy.