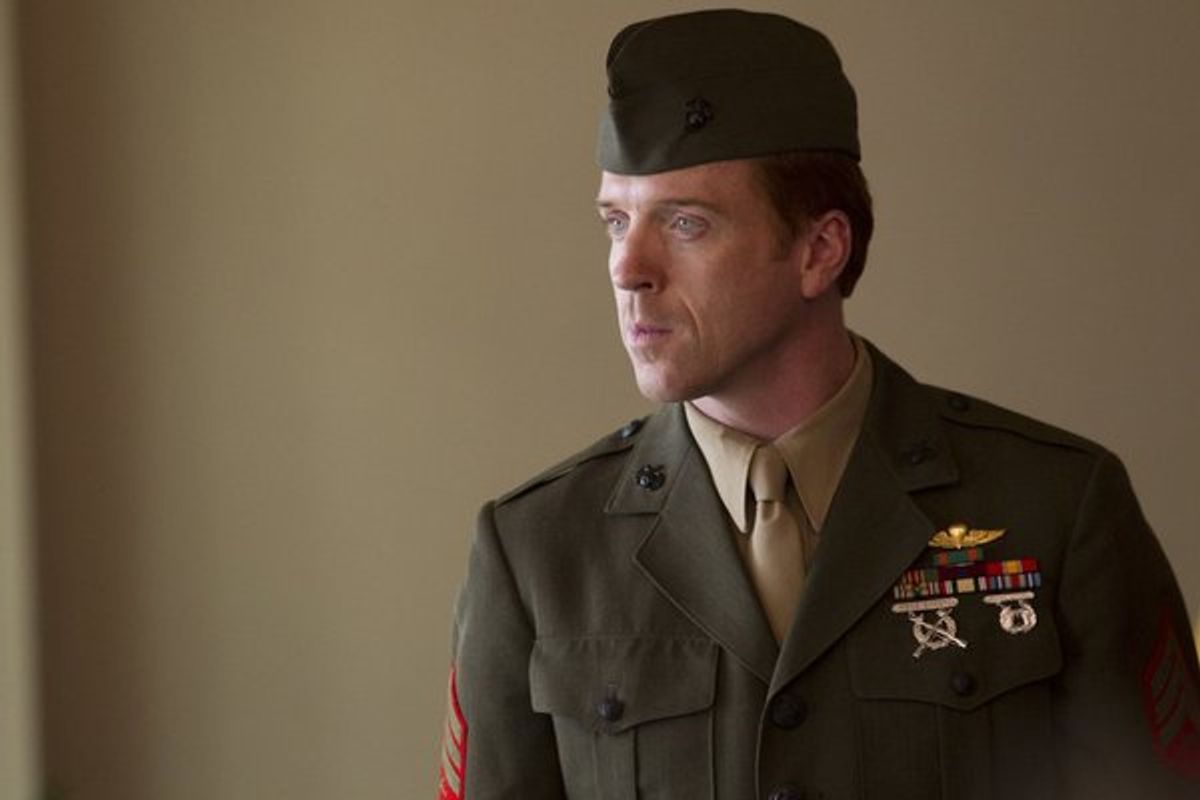 The best new show of the fall debuts tonight -- and I'm as surprised to be writing that as you are to be reading it, given that the show in question, "Homeland," airs on Showtime (Sundays 10 p.m./9 Central), stars Claire Danes as a CIA analyst, is brought to you by a couple of the producers of "24," and sounds as though it could have been pitched as "The Manchurian Candidate: The Series."

But set that aside, if you can, and look at what's on-screen, because it'll reward your attention. Very loosely based on the Israeli TV series "Prisoners of War," it's about CIA agents tracking a former Marine (Damian Lewis of "Band of Brothers") who might be a terrorist agent. The show delivers the core elements you expect from a military/espionage thriller, including sex, violence, conspiracy plots and clever detective work. But this isn't the new adventures of Jack Bauer or James Bond, or even a Tom Clancy-style geopolitical fantasy. The characters of "Homeland" don't fall into the genre's four major categories: superheroes, supervillains, bureaucrats and cannon fodder. They're psychologically plausible human beings.

But let's return to that "Manchurian Candidate" comparison for a moment, because it's useful. Richard Condon's source novel and the two films that adapted it were built around a couple of compelling adversaries -- the brainwashed assassin Raymond Shaw and his commanding officer, Bennett "Ben" Marco. Although Marco was entrusted with defending the United States against the threat posed by Raymond and his foreign masters, the men had key characteristics in common, including post-traumatic stress disorder, recurring nightmares, a profound sense of alienation and an aura of tragic loss verging on victimhood. Ben was ultimately saved by love, while Raymond was destroyed by it. Both were broken souls who would have had plenty to talk about had their missions -- and their personalities -- not been at odds. If you've seen either film version of "Candidate," you remember the small moments in which the film's plot is back-burnered long enough to ask what it might be like to have survived unspeakable violence in war, then returned to a peaceful and mostly clueless nation. The best sequences in "Homeland" play as if its writers studied those moments and used them to calibrate the tone of the show.

The bond between Shaw and Marco is the bond of warrior-pariahs. A different but equally touching version of this bond is at the center of "Homeland" too. Like Bennett Marco, who has nightmares about POW deaths that he couldn't prevent (and in one case actively participated in, under brainwashing), Danes' character, CIA officer Carrie Mathison, is haunted by a failure to act. The pilot doesn't give details, but we're led to believe that 10 years ago, when she was a young and green agent, she could have done something to prevent the attacks but failed. Carrie is habitually late for staff meetings and blurts out uncensored thoughts to commanding officers that verge on insubordination. If she weren't brilliant -- and protected by a mentor played by the superb Mandy Patinkin, about whom I'll say more in a moment -- she would have been fired years ago. The war hero of "Homeland," Nick Brody, is a Raymond Shaw type -- aloof and awkward and emotionally closed-off (though this seems to be more the result of his war experience rather than existing defects in his personality). He is haunted not just by his imprisonment and torture, but by guilt over an atrocity that he committed in Iraq.

But when you move beyond its plot outline, "Homeland" is a most unusual show. Executive producers Howard Gordon and Alex Gansa ("24") and Michael Cuesta (who directed the pilot of "Dexter" and the underappreciated indie film "L.I.E.") push against the cliches of espionage TV, to the point where they seem to be constructing an anti-"24." The threat posed by Brody -- if he is in fact an agent of chaos -- is a classic ticking time bomb scenario, of the sort that the last administration invoked to justify the dilution of civil liberties, legalized torture and the invasion of Iraq. But "Homeland" isn't content to push the usual post-9/11 panic buttons. Instead it grounds its far-fetched tale in reality and fills it out with gritty, sometimes amusingly mundane details. (In a future episode, Carrie's flakiness is certified by a silent close-up of her bare feet: only one of them has painted toenails.)

The show states that there are, in fact, organizations that want to carry out terrorist attacks in the United States for ideological and religious reasons, that it's stupid to pretend the threat isn't real, and that the CIA is right to try to intercept and destroy such groups by any means at its disposal. But "Homeland" is also aware of the moral shortcuts that accompany this mission. There's a great scene in the pilot in which Patinkin's character, Saul Berenson, seeks after-the-fact authorization for Carrie's illegal surveillance operation by visiting a judge (Michael McKean) at his home. The characters do a wry soft-shoe around the cynical facts of the meeting -- the judge confirming that this is yet another request that Saul can't justify with details because they're all "need to know," and Saul saying, yep, it's one of those -- and at the end we get a bit of information suggesting that the judge rubber-stamps these orders because the agency has something on him. "Homeland" also has the stones to hang real-world political details on its conspiracy plot. Although Brody was held prisoner in Iraq, his handlers appear to hail from the nation that produced most of the 9/11 hijackers and Osama bin Laden himself: Saudi Arabia.

The show also reminds us that counterterrorism and the American military are part of the same huge political and economic machine, that the machine has to be oiled with tax money, and that with the public exhausted by 10 years in Afghanistan and eight in Iraq, the propaganda value of a bona fide war hero like Brody is incalculable. So Brody has to be a symbol even though he can barely keep it together as a man. He is physically and emotionally scarred by his imprisonment and torture. His kids are uncomfortable around him because they were very young when he left for war, and his sex life with his wife, Jessica (Morena Baccarin of "V"), is dysfunctional for all sorts of reasons, including Brody's horrifying scars and his wife's secret relationship with his best friend and commanding officer, Capt. Mike Faber (Diego Klattenhoff). And now that he's back home, he has become a different kind of prisoner -- a hostage of the media, which surrounds his house and peeps in his windows. All this would be enough to crush anyone's spirit, but Brody has another, more horrible burden: Thanks to the brainwashing he endured, he's not even in control of his own mind. He's a puppet, and neither he nor his CIA monitors know who's pulling the strings.

Carrie and Brody (as he's called by almost everyone) don't meet in the pilot, and it's one measure of the show's excellence that you don't expect or even want them to. Without revealing anything of substance, I can say that the show's producers don't knock themselves out contriving the face-to-face meetings that are normally considered mandatory in cat-and-mouse thrillers. In the pilot's taut opening sequence, a soon-to-be-executed terrorist tells Carrie that an American soldier has been "turned"; when Brody returns home, she's convinced he's the one and sets up an illegal audio/video wiretap on his suburban house. But while Brody initially has no idea that Carrie is watching him, the characters are strongly and somewhat mysteriously connected. There's even a moment in an upcoming episode where Brody has a nightmare and Carrie, who has passed out on a couch surrounded by live video feeds of the Brody household, jolts awake at the same moment that he does. (The editing almost makes it seems as if she woke up first.)

It's hard to oversell the excellence of this cast. Danes shows us a new side -- tough but messed-up, self-destructive and a bit promiscuous, sometimes manipulative. Morena Baccarin's work as Jessica is so life-size that it takes a moment to register that just a few months ago, she was playing the close-cropped, blank-faced extraterrestrial despot on ABC's "V." Patinkin is perfection as Saul, who's keenly aware of being a Jewish agent in an institution run by gentiles, and struggles to behave ethically in a job that's defined by moral relativism. Lewis -- who was cast in "Homeland" after the producers saw him in Lodge Kerrigan's film "Keane," about a paranoid schizophrenic -- is the perfect actor for this part, a trim, ruggedly handsome man with a glint of misery and terror in his pale green eyes; the scene where Brody reunited with his family for the first time in eight years and flinches in fear when he realizes he's about to be hugged is the moment that made me fall in love with this show. "Homeland" gives these actors and many others the dramatic space required to create real characters instead of types.

The show's most intriguing quality, though, is its fascination with voyeurism, which it encodes in its central relationship. Carrie's surveillance of the Brody family isn't just an efficient way to get Carrie the plot details she needs without having to go though narrative middlemen; it also connects the show's story to the U.S. culture of surveillance that multiplied a thousandfold after 9/11, and that itself was probably emboldened by several generations of Americans who grew up watching the intimate lives of strangers on TV.

The surveillance of the Brodys isn't just Carrie's job; it's a TV show that she watches from a couch in her living room while jotting down observations on a notepad (the CIA agent as TV critic). This "Rear Window" flourish deepens an already intelligent show by implicating the viewer in Carrie's privacy invasions. Like a devoted viewer of an R-rated cable drama, Carrie constantly has to decide what's really "necessary" to understand the plot of the story she's committed to, and what is "unnecessary" or merely prurient. One of the most disturbing scenes in the premiere finds Carrie watching Jessica prepare to have sex with Nick for the first time in eight years. It's an uncomfortable, moving, ultimately wrenching sequence -- one that many military couples have experienced in one form or another -- and there's no doubt that by observing it, Carrie can gain valuable insight into Nick's psyche and Jessica's effect on it. But how much information does she actually need? Carrie herself isn't sure. At first she seems ashamed of herself for wanting to watch such a private moment, and she works out a compromise: she'll watch but not listen. She takes her headphones off -- but within minutes, she's put them right back on again. Talk about a need to know.