Bedroom tattoo shop is haven for a young artist

In a tough economy, a start-up opportunity starts at home 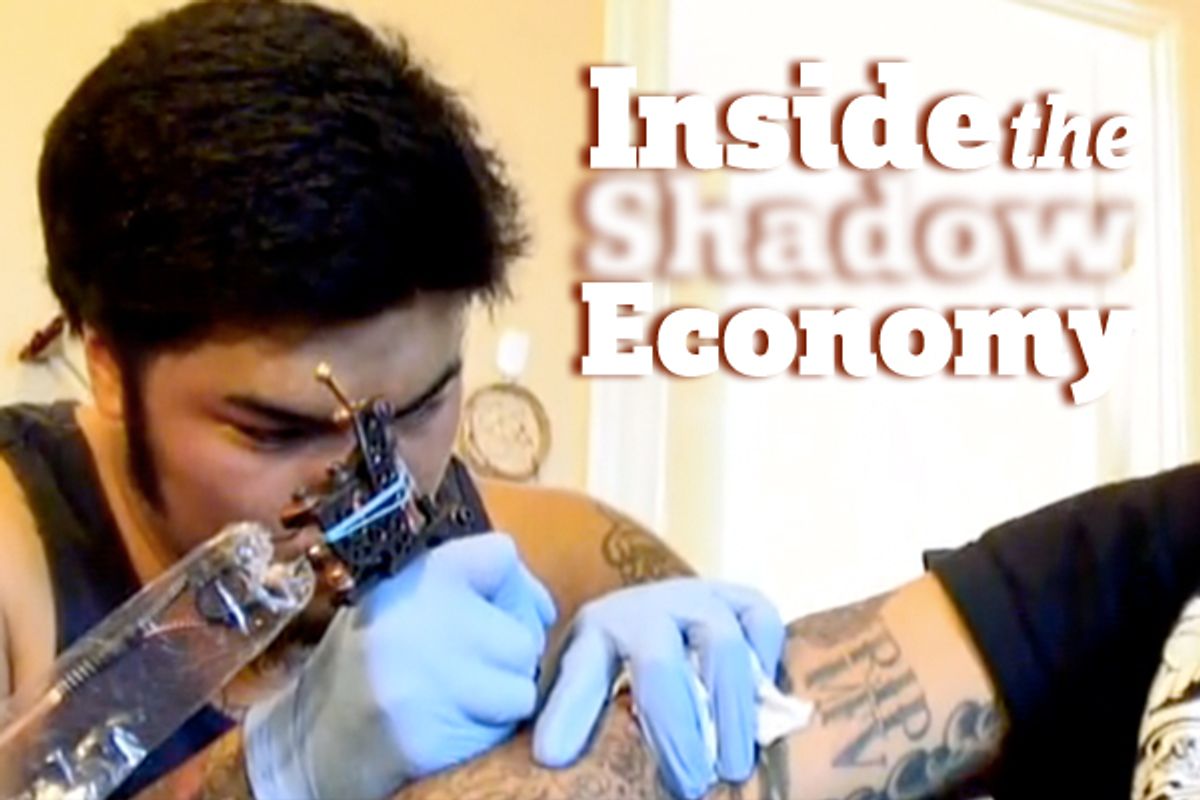 SAN FRANCISCO -- Twenty-year-old Jerome Noveras from Daly City, Calif., lives in the heart of San Francisco's Sunset district with his nine roommates. It's the kind of house where every time you glance at the couch in the living room there are at least two new people on it who seemed to appear out of nowhere, lounging back comfortably, their eyes glued to something on the TV.

The room where he and his girlfriend live in the back of the house is typical for a couple in their early 20s. There's a PlayStation 3 that sits humming by a TV with "Law and Order SVU" idle on the screen.

What's not typical is the tattooing equipment on a workbench with his tattoo designs and his girlfriends' colorful Hello Kitty cards sharing the same wall space above.

Noveras, a high school graduate, is part of a generation coming of age in the Great Recession where jobs are more than scarce. With the unemployment rate for 18- to 24-year-olds now running at more than 20 percent, young people increasingly look outside the formal economy to make a livelihood. As Noveras has discovered, there is more opportunity in the shadow economy.

He has had a few jobs at tattoo shops in the city, but for one reason or  another they didn't work out. He figured what better place to pursue his dream than in his bedroom.

‘‘It's been about two years now since I did my first tattoo. I'm still pretty new to the game,” he said.

The tattoo business is very competitive in San Francisco so it's been difficult for Noveras to find an apprenticeship with a seasoned tattoo artist. But thanks to brave friends who let him practice on them with new tattoo designs and ideas, and under the guidance of some artists in the industry, he's been able to teach himself the ins and outs of tattooing.

There are some benefits to being an independent tattoo artist.

Noveras said he is able to barter tattoos for other things with friends and fellow artists. He says he's traded tattoos for all sorts of things. A while back he traded a tattoo for a professional massage.

"I usually charge a fraction of what shops charge because I don't have all that overhead," said Noveras.

Even though he tattoos out of his house, he doesn't cut corners when it comes to safety. He's a stickler about keeping things clean and takes the same precautions as shops do. He opens all new needles and tubes every time he tattoos. He has a little red hazard box on his workbench where he throws away the scraps.

His business is not entirely off the books.

"I do have my blood-borne pathogens license," he said. "I had to take a class to learn how to  prevent blood-borne diseases like HIV and hepatitis."

At just 20, most of his body is already tattooed. Vibrant colorful artwork peeks from under his shirtsleeve and stretches down both arms and legs.

He used to work at Burger King and save some money every month to get another tattoo by some of the best tattoo artists the city had to offer. Noveras said he always knew he wanted to have a lot of tattoos and was introduced to tattooing by some friends he uses to do graphite with. When he was bored, he would practice tattooing on his own legs.

Now the money he makes tattooing is a big chunk of his income. He advertises by word of mouth; he schedules appointments via text messages.

Being in the business isn't cheap though. Noveras' monthly expenses for tattoo supplies can run up to $100. The six custom tattoo machines he uses range from $200 to $300. The two power supplies that run his machines range from a $50 to $100. A one-ounce bottle of ink costs about 9 bucks.

Although he makes good money tattooing, business is not stable. So he holds down a second job as a line cook. He was lucky enough to find a job where his visible tattoos are not an issue. In fact, he says a lot of people in the culinary industry are heavily inked.

"Most of the chefs I know have like full sleeves, half sleeves, hand tattoos. It's actually pretty cool because they're the ones working behind the scenes."

Noveras feels like it's his job to tell young people who want tattoos on "public skin" such as face, hands and neck that "those kinds of tattoos can keep you from getting some jobs."

"Think twice," he advises. "Hand and neck tattoos are what we call job stoppers. I really advise  them to think about what they're doing right now."

He says young people should consider what job field they want to go into before  they decide on any visible tattoos.

"I know kids in nursing programs that have hand tattoos. In a hospital who would  want to hire someone who is heavily tattooed?"

Noveras' friends and their friends make up most of his clients. But he would someday like to apprentice and work in a shop.

"I think definitely the goal is to one day open my own shop," he says. "They say you can't tell until [you are] three years in a business if you're going to make it or not. I'm hoping to be in this for a long time."

If so, he will emerge from the shadow economy.

Donny Lumpkins, 22, is a multi-media content producer at New America Media. HIs latest piece was Down and Out in Dolores Park -- Growing Up Poor in the Bay Area.

Inside The Shadow Economy Tattooing