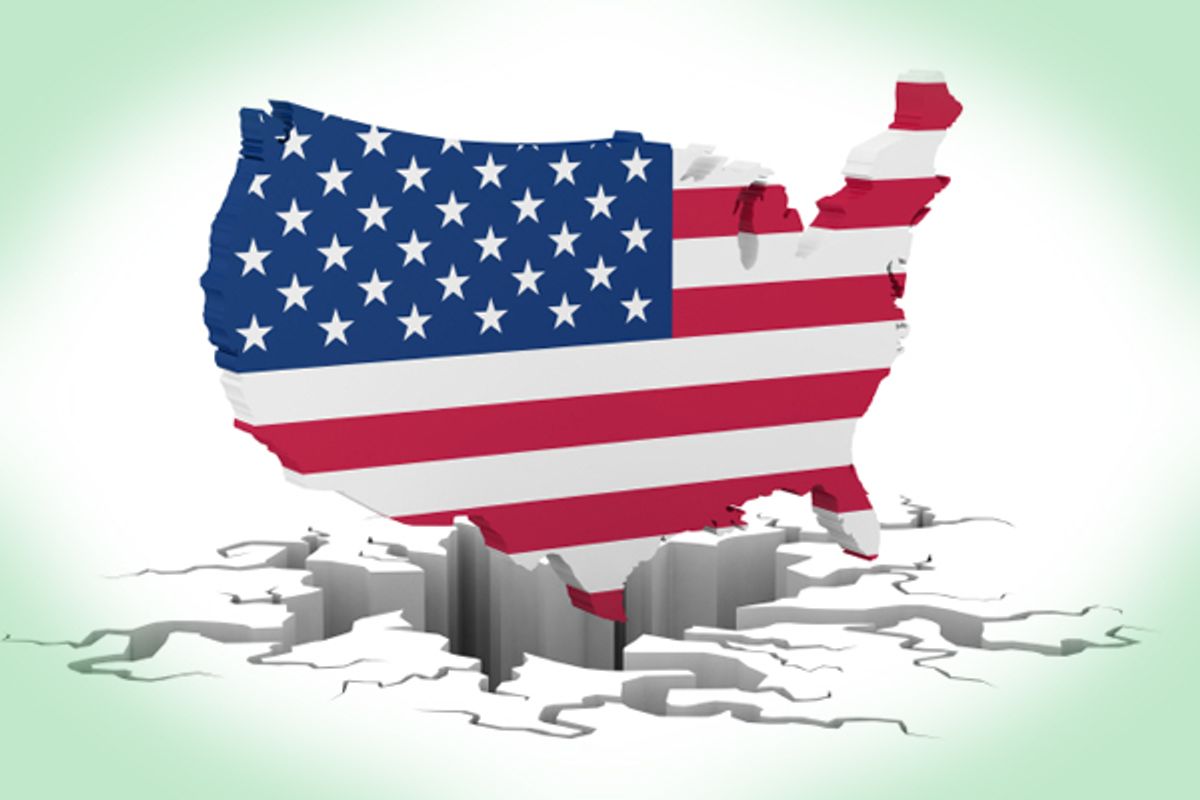 Call it a case of the glass 1 percent full versus the glass 99 percent empty. In the short-term, economic data continues to trickle in indicating weak signs of growth -- nothing, perhaps, that will change gloomy perceptions of the economy, but still mildly encouraging. Every day in which a slide back into deep recession doesn't come closer is a good day.

But viewed over the long term, the U.S. economy is a disaster. Average wages for American workers continue to fall, and the steady decline in the overall standard of living for most Americans continues remorselessly.

First, the good news, such as it is. On Thursday, the Department of Labor reported a small decline in weekly jobless benefit claims. The four-week moving average -- a measure that helps to sort out the noise in an indicator that tends to bump sharply up and down -- dropped to its lowest point since April. As the Economist's Ryan Avent explains, much of the rise in the jobless claims in the late spring and summer can now be confidently blamed on temporary shocks to the U.S. and global economy. If Europe doesn't blow up and the U.S. government avoids crippling austerity, there should be continued improvement in the labor situation.

On the housing front, housing starts jumped 15 percent in September, exceeding expectations (although much of the gain came from construction of multi-family units, another indicator that jumps wildly from month to month). Sales of existing homes fell from August, but were significantly higher than a year ago. Meanwhile, the Philadelphia Federal Reserve Bank's influential Business Outlook Survey registered its first positive reading in three months, signaling renewed growth in manufacturing.

Again, nothing dramatic, but conceivably a continuation of recent trends suggesting that the second half of 2011 will be a lot better than the first half.

According to payroll data crunched by the indefatigable David Cay Johnston, wages for most workers fell  in 2010, continuing a devastating long-term trend.

The figures from payroll taxes reported to the Social Security Administration on jobs and pay are, in a word, awful...

There were fewer jobs and they paid less last year, except at the very top where, the number of people making more than $1 million increased by 20 percent over 2009.

The number of Americans with any work fell again last year, down by more than a half million from 2009 to less than 150.4 million.

The standard of living for Americans has fallen longer and more steeply over the past three years than at any time since the US government began recording it five decades ago.

The average individual now has $1,315 less in disposable income than he or she did three years ago at the onset of the Great Recession.

When you compare the bad news with the good news, it's obviously no contest. Encouraging economic indicators are fragile reeds, ready to be blown into oblivion by the first negative gust. The long-term trends, in contrast, are dug in, grinding away at the well-being of most Americans, and unlikely to be affected by anything other than a massive government intervention.

The juxtaposition explains both the vigor of the Occupy Wall Street protests and the vast challenge faced by President Obama in generating any enthusiasm for his reelection. Compounding his problems, as he prepares to address another joint session of Congress on Thursday night on the topic of the economy, is a united opposition party determined to stop him from doing anything meaningful, while busily pushing for exactly the kind of austerity likely to make all our problems worse.