In the school of the 1 percent, griping greets the movement 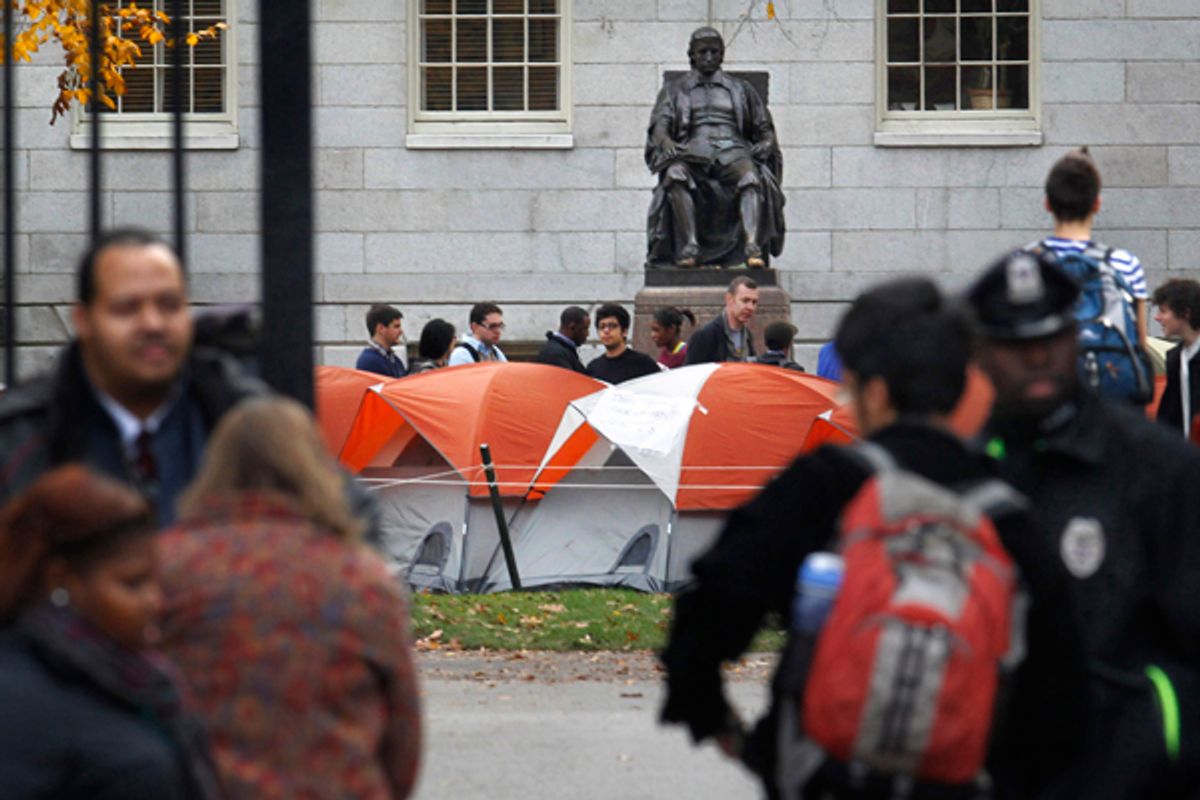 Occupy Harvard, near a statue of the university's founder, John Harvard. (AP/Steven Senne)
--

CAMBRIDGE, Mass. -- It’s the height of recruiting season at Harvard College, and the big draws are, as always, the banks, the hedge funds and the consultants. A quick look at the Office of Career Services’ recruiting event schedule is revealing. This past week, there were internship open houses for the top-tier consulting firms McKinsey and Bain, the private equity powerhouse Blackstone, and banks from JPMorgan to Barclay’s to Citigroup. This week Bridgewater, the world’s largest hedge fund, Morgan Stanley and Bain Capital -- the private equity firm Mitt Romney founded -- are coming to Cambridge.

So when 800 students and sympathizers -- demanding fair treatment for Harvard workers, divestment from corporations that abuse workers' rights, and other actions to reduce the university’s contribution to economic inequality -- erected tents in Harvard Yard on Wednesday night and began the Occupy Harvard movement (the media working group of which, in the interest of full disclosure, I am a participant), they didn’t enter the most hospitable environment.

And sure enough, student reaction toward the protesters was swift and negative. I Saw You Harvard, the university’s widely used missed-connection page that also functions as a forum for general griping, was overwhelmed with students complaining about the occupation.

The posts were filled with accusations of hypocrisy (“I saw you ... OccupyHarvard protesters, camping out in your matching expensive tents, funded by the very institution that you fight against”), defensiveness about Harvard as an institution (“I saw you Harvard protesters ... forgetting there are greater evils than a University with an incredible financial aid program”) and, of course, profanity (“OccupyMyAs*hole sounds more fun,” “Occupy Harvard needs to Occupy DEEZ NUTS!!!!!!”).

But more than anything else, students were bothered by the university’s decision to restrict access to Harvard Yard to those with student IDs, a decision most undergraduates blamed on the occupiers (who, for the record, have repeatedly called on Harvard to open up the yard).

It’s worth noting that in the history of Harvard protests, such a lockdown of the yard is very rare. The only precedent is the 1969 Vietnam protests, in which a group of 30 students, later swelling to 500, took over University Hall, expelling administrators, and picking up and carrying out associate dean Archie Epps when he wouldn’t leave voluntarily. (Epps, campus legend has it, bellowed, “Unhand me, motherfuckers!” as he was being whisked away.) Then, Harvard locked down the yard, and called in state and local police to force the occupiers out.

But subsequent protests have not resulted in a similar response. The 2001 living wage campaign saw nearly 50 students occupy Massachusetts Hall, which houses the offices of Harvard’s president, for three weeks, with almost a hundred sympathizers staying in tents in the yard each night. It was a far larger protest than Occupy Harvard is, drawing the support of 400 faculty members and four U.S. senators, and throughout all of it, the yard remained open.

And yet, with only 30 tents pitched, Harvard still insists on regulating access to the yard two days after the protests started. The move, which followed a long period on Wednesday night in which no one was allowed in or out of the yard, was undoubtedly designed to turn students against the protesters by making students stop to show identification on their way to class.

And it worked. David Wang, a senior, tweeted, “Occupy ‘Occupy Harvard’: Because 1% of students shouldn't be allowed to make 99% wait in line to go through and out of the yard. #justleave,” an “I Saw You Harvard” poster complained, “Your ‘movement’ is restricting my movement and keeping me from getting to class and to my job.”

Other students gripe about the occupiers’ slogan, “We want a university for the 99%.” The mantra echoes that of other Occupy movements, but many a Harvard undergraduate has taken great exception to the idea that they might occupy a place of privilege within American society.

As confounding as this likely is to outsiders, some inside Harvard insist that the university’s generous financial aid package means that it represents a wide cross section of American society and that, by opposing Harvard and especially by criticizing its endowment, occupiers are taking aim at nothing less than the American dream.

Michael Cotter, a sophomore and a friend of mine, took to the Crimson, the school’s newspaper, to defend the university on just these grounds, writing, “Considering Harvard’s ever-increasing financial aid packages ... it seems somewhat farcical to suggest that Harvard doesn’t want increased socioeconomic diversity.”

Harvard, indeed, has a lot of money, and a lot of that money goes toward financial aid. But that’s only half the story. The college admissions office brags that 70 percent of Harvard students receive financial aid – but that means 30 percent do not. And given that families making well into the hundreds of thousands of dollars a year can still receive financial aid, that means that over a quarter of students are from families in the very highest reaches of the U.S. income distribution.

Harvard, then, does not function mainly to afford economic mobility to poor students, but to entrench the position of students who were rich when they got here.

Other students, however, have abandoned all pretense of representing the masses. Students in Wigglesworth, one of the freshman dorms, grabbed a bullhorn and chanted, “We are the 1 percent,” “flip me some burgers,” and “fuck you, lazy assholes,” as student Daniel Backman reported in the Harvard Political Review. The sentiment continued last night as I went to sleep at around 2 a.m. in a tent in the yard. A gang of drunk “bros” wandered by the occupiers chanting, “We are the 1 percent," with a few “Joe Pa-ter-no” chants in honor of the disgraced Penn State football coach thrown in for additional offense.

Some grad students in the tent next to mine shouted back, “Fuck you, you 1 percent motherfuckers!” One of the chanters responded, “Why are you in teepees? We all know you have iPhones.” A grad student yelled back, “I don’t have a smartphone! Fuck you, I grade your papers.” The bro moved on. His sparring partner may grade his papers, but he’s the one in the 1 percent. He knows who wins in the long run.