The tragedy of Adam Sandler

\"Jack and Jill\" is the most reviled film of 2011. If only Sandler followed the Bill Murray model for aging comics 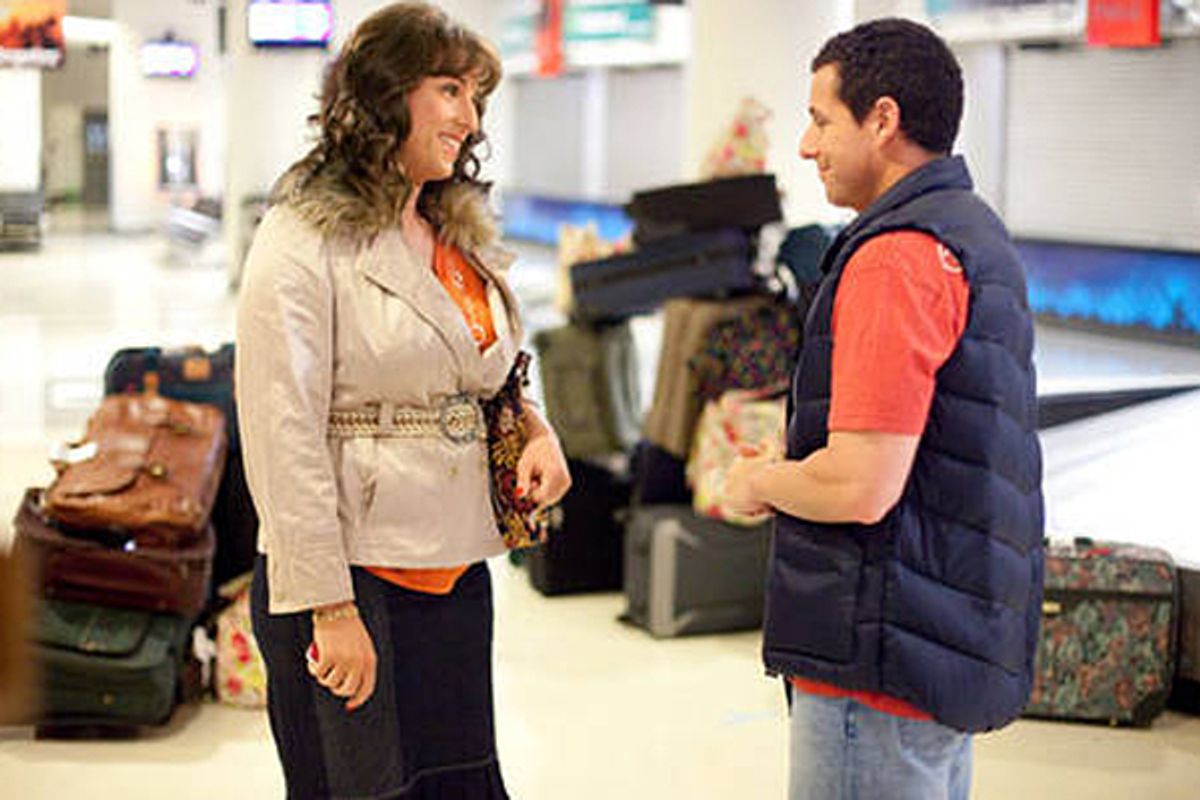 If you’re someone close to Adam Sandler, there’s a 99 percent chance you’ll be starting a sentence this week with “Well, uh, at least it made $26 million ...” and ending it with some sort of forced positive spin. That’s because Sandler’s twins comedy "Jack and Jill" received some of the worst reviews of any movie ever on Friday.

"As for Mr. Sandler, I have always been interested in what he would do next, and I suppose I still am, especially if what he does next is retire," wrote A.O. Scott in the New York Times. Added Time: "More than 24 hours has passed since I watched the new Adam Sandler movie 'Jack and Jill' and I am still dead inside." Its Rotten Tomatoes score is a 3. Out of 100.

Does Sandler even care? He got paid a ton for the film ($20 million according to IMDb), got his usual stable of actor-friends roles in it, and all he had to do was wear a wig and some prosthetic boobs. Maybe that’s not so bad. After all, comedies aren’t supposed to be highbrow social commentaries. They’re just supposed to be funny, right?

Maybe. Or maybe Sandler will reflect on some of the choices he’s made over the last decade and a flicker of regret will pass over him. Maybe he’ll think back to his stellar performance in "Punch Drunk Love" and wonder why he didn’t follow this new public and critical reception with better, more interesting roles. Maybe he’ll think about how ironic it must look for him to star in a film that's inexplicably even dumber than those joke premises parodied in 2009’s "Funny People." Maybe he’ll wonder whether he wants his legacy to be hereby cemented as the unanimous king of the high-concept, lowbrow comedy, or whether he should have chosen a different path -- one resembling Bill Murray's.

By 1997, Murray was in an in-between phase. He wasn't too far removed from great performances in "Groundhog Day" and "Kingpin," but "Larger Than Life" and "The Man Who Knew Too Little" were both critical and financial disappointments. He was safely on the aging comedic actor trail -- forgettable feel-good family comedies and the occasional TV guest spot as someone’s dad. But then, whether as an intentional career-altering move or simply on a lark, Murray took a chance on a young director’s second feature: Wes Anderson's "Rushmore."

While the film had a modest showing at the box office, this became a turning point role for Murray. Not in terms of the character — he’d played down-and-out, apathetic types before — but in terms of the intimacy of his performance. Murray let us in so completely that it was tough to see where Herman Blume ended and Murray began.

The man who made a career as the most ironic, self-aware, winking-to-the-audience comedic actor around calmed down and embraced a new sincerity. He was the purest cinematic embodiment of the “sad sack” imaginable and he utterly owned it. Every gesture and physical movement felt so authentic and so completely Murray. It was as though he had channeled every terrible pitch meeting, audition, press junket interview and glad-handling-agent encounter -- the sadness of 25 years of pleasing people with laughs -- into each droopy-faced shrug. And with that shrug, the aura of Murray was established.

With subsequent films like "Broken Flowers," "Lost in Translation" and "The Royal Tenenbaums," Murray cemented this strange, almost mystical mood and became one of the poster boys for the revitalization of indie film. These young filmmakers took him in, anointed him their figurehead, and we embraced and admired him so fully that we forgave him "Charlie’s Angels," "Get Smart" and "Osmosis Jones." We forgave him for hitting on an 18-year-old Scarlett Johansson in "Lost in Translation." We even bought his excuse when he said he only signed up for "Garfield" because he thought it was written by the Coen brothers (the film was actually written by Joel Cohen, with an h). He was such a magnet for unexplainable projected affection that even the five minutes of him sleepily playing himself in "Zombieland" somehow became the most memorable and talked-about part of the film.

And then you have Sandler. A comedic actor with a very similar career trajectory to Murray: Both spent half a decade on "Saturday Night Live," were one of the top three or four most iconic comedic actors of their respective decades, and starred in small cult films later in their careers that dramatically altered the scope of their acting and public perceptions. The only difference is that after "Rushmore," Murray slowly gravitated away from bigger mainstream fare and into lauded indie, whereas Sandler jumped right back into schlock. Murray's choices matured, while Sandler, despite what "Grown-Ups" might connote, still felt like a boy, Peter Panning his way through more than a half-dozen silly comedies since "Punch Drunk Love" (whether playing an ex-Mossad agent turned hairdresser, a man pretending to be gay for insurance claims or someone in possession of a time-controlling, magic-powered remote).

The early enthusiasm for "Tower Heist" was based around the idea of Eddie Murphy once again being Eddie. This implies that Eddie hasn’t really been himself for a while. For how long? I would argue since 1992’s "Boomerang," but I might be a bit harsher than most. It just feels like he’s being hiding for 20 years (with the exception of "Dreamgirls"). Hiding behind fat suits, talking donkeys, and alien alter egos. Just hiding from being himself. Hiding from being Eddie.

Which is what’s so heartbreaking about Sandler. The greatness of "Funny People" hinges on Sandler’s ability to adeptly capture the sadness of a comedic actor looking back on his career when confronted with mortality. And Sandler nails it! Hits every goddamn note, moment and scene, masterfully. And while I do believe he’s a great actor (when he wants to be), part of it also comes from Judd Apatow so skillfully tapping into Sandler’s own regret about his own choices and then seamlessly filtering them through the character of George Simmons. That’s why the parodies within "Funny People" — like "Re-Do," where a lawyer gets magically turned back into a baby or "MerMan," the story of a male mermaid — hit so hard. It feels like Sandler is acknowledging the ridiculousness of his filmography and owning up to it.

That’s what makes "Jack and Jill" so perplexing. How can you soberly acknowledge all that one year, and then star in "Jack and Jill" the very next? And more important, how can you leave that much talent on the table? It’s like turning down the opportunity to play for a championship in order to spend another year on a bottom feeder. It just doesn’t make sense.

So Adam, call up Rob Schneider, Nick Swardson and Allen Covert and tell them that they can’t be in your next movie. Tell them you’re doing one alone. One for yourself. You’re letting Sandler be Sandler.  And then let one of a dozen eager young filmmakers showcase your acting chops.

Don't go down the same path as Eddie Murphy or Martin Lawrence. Don't spend another 25 years in fat suits, female wigs and baby costumes. Sandler still has a choice. I hope that before he selects his path, he remembers that it takes the makeup department five hours every morning to turn an actor into a Klump or a Big Momma. That’s a long time alone with your thoughts.

Toph Eggers is a screenwriter in Los Angeles.