The science of taste

Why can\'t a blindfolded person tell white wine from red? A top neuroscientist explains how the brain creates flavor 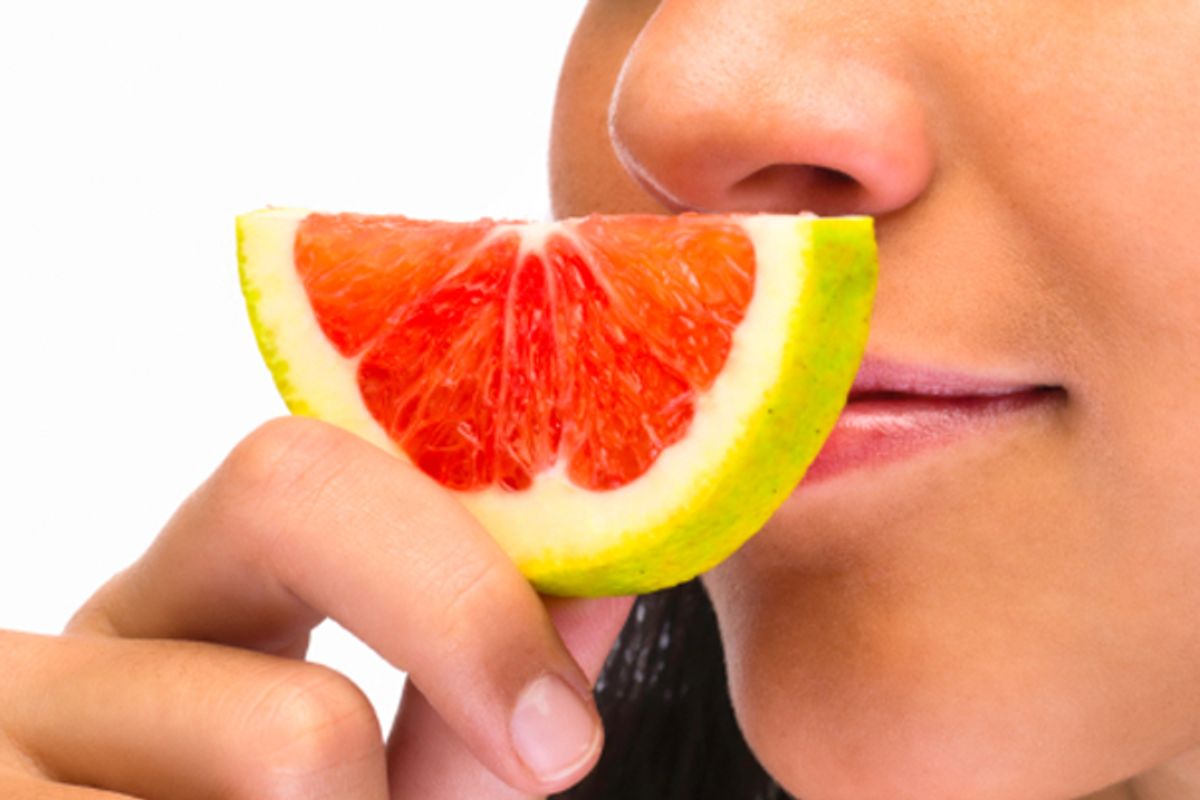 Whether we're talking about America’s obesity epidemic, mocking the “foodie” movement on "The Simpsons," the USDA’s revamped food pyramid, or what they’re cooking up on "Top Chef," food and eating are a national obsession -- especially at this time of year.

But just as fascinating is the hard science behind our intimate relationship with food. Gordon M. Shepherd, professor of neurobiology at the Yale School of Medicine, has spent a lifetime researching the brain mechanisms involved in olfaction (our sense of smell) and its impact on flavor perception in the brain. His new book is “Neurogastronomy: How the Brain Creates Flavor and Why It Matters,” out this month from Columbia University Press. Shepherd’s work is anchored in a burgeoning field within neuroscience -- figuring out the mysteries behind our olfactory system, the ways in which smells are represented and processed in the brain.

Shepherd argues for the quintessential importance of olfaction in our everyday experience of food. Without smell, Shepherd says, there is no flavor. “Neurogastronomy” takes a detailed look at just how smelling in the nose, mouth and brain produces the unique experience of flavor that we associate with eating our favorite or least-favorite foods.

Shepherd explained why sitting down to Thanksgiving dinner triggers our instincts to overeat, how to do the nose-pinch test, and the best way to fool an experienced wine taster.

My first interest is in neuroscience, in particular in the part of the brain that processes the sense of smell. And we all think we know what smell is ... It’s when we sniff something in and it has a nice smell. But as I went further along I began to realize that increasingly smell was for sensing the flavor of food. It goes almost unrecognized as we eat our food because we think it all comes from taste in our mouths. The more research that I did on flavor, the more I realized that the sense of smell was the dominant sense in flavor -- and that we are almost totally unaware of it. The science of smell is increasingly important for understanding flavor, and flavor really contributes to whether we are eating healthy or unhealthy diets.

You explain that smell is a dual sense. It’s composed of orthonasal and retronasal smelling. What’s the difference between them?

Orthonasal is sniffing in. It happens when we sense perfume, something in the environment, or in the aromas of the food we are about to eat. Retronasal is called retro because it comes from the back of the mouth, and it’s the way we smell when we have food in our mouths. While we might not be aware of it, vapors that come from our food while we are breathing out stimulate cells in our nose. That is how smell contributes to flavor. We don’t realize it because all we usually notice is the mouth-feel, the textural quality of food.

In the book, you discuss the ways in which smelling relates to the experience of flavor, and how it is different from tasting. You say that smell is “synthetic” while taste is “analytic.” That's an interesting idea -- could you elaborate on what you mean?

It’s really simple. Taste is sweet, salt, sour and bitter -- and umami, a meaty taste. The amazing thing is that when you have something in your mouth, you can taste whether it’s sweet, sour, bitter and so forth. This is analytic, because you analyze taste piece by piece, just as you would picking things up from a table. Each one is picked up separately. Smell is different because smell arises as a whole entity. It’s impossible to take the pieces apart. That’s why we call it synthetic: It’s synthesizing and bringing things together. And these are two aspects of sensation that are very important for the different senses.

One of the simpler concepts in olfaction is that smell molecules bind with receptor cells in our nasal cavity. After that things get a little bit more complicated as far as how information is relayed and processed within the brain.

Smell molecules are represented in the first stage in a part of the brain called the olfactory bulb. The olfactory bulb processes the information about smell in a way that is very similar to the way our retinas processes an image, or the way auditory parts of the brain represent musical patterns. It’s important to understand that smell is not completely unique in the way it stimulates the brain, because it processes information in a pattern, the same way other senses do. Only in olfaction is this sensory pattern represented in the frontal cortex, which is the most developed part of the human brain. All of the other senses have to be relayed forward in order to get to the cortex, so in mammals the sense of smell has privileged access to the front of the brain.

In another interesting part of the book, you mention studies that have shown marked variations in taste between some individuals. In some of these studies people have been labeled “supertasters." How do their tasting ability and propensity differ from the rest of us?

This has to do, partly, with how many taste buds they have. One of my colleagues has shown there is a correlation between having a high number of taste buds and a propensity to be sensitive to bitter taste. The more taste buds you have, the more likely you are to be a supertaster, and it’s caused by genetic differences. But keep in mind that this difference is specifically in the sense of taste. Taste contributes to flavor, but sometimes taste and flavor are used interchangeably, and they are not the same.  There should be no ambiguity between “taste” -- which is sweet, salty, sour or bitter -- and flavor, which is a combination of olfactory sensations, tactile sensations and taste.

What role do texture and color play in taste?

You can be really fooled by the color of the food you are eating. I mention that you can fool people, and these include experienced wine tasters, into assuming that a white wine is a red wine, simply by dying it red. I think that’s a very good example of how color can be used to manipulate people. It’s something that gives us expectations about the flavor of what we are going to eat, and it’s very well understood by food companies, a point that Eric Schlosser makes in "Fast Food Nation." You can bet that food companies are studying the colors that kids like to see on boxes of cold cereal and cans of soda.

This might be pertinent, as Thanksgiving is coming right around the corner. What is “the buffet effect,” and how does it relate to some of our instinctual eating behaviors?

The buffet effect, also known as the cafeteria effect, relies on the assumption that if you have only one food in front of you, you will stop eating when you are full. But if someone brings you another plate with a different type of food on it, you are likely to keep eating. And it can go on like this indefinitely. You will eat far more with a variety of foods at one sitting than you would if you were eating only one dish. Fast-food companies know this. They sell a series of things in addition to the Big Mac. Thanksgiving is a good example of how with a dozen different dishes we just keep eating and eating. It’s a very real thing and people who are obese lack control over it.

Many parents tend to struggle at times with kids who are picky eaters. But in the book you discuss some of the ways in which taste and olfaction are relatively plastic. You mention that flavor preferences can change and young children can learn to enjoy certain types of foods from exposure. Do you have any advice for parents of picky eaters?

Well, I know from my own family experience that kids vary widely as eaters. And some aren’t just picky eaters but will refuse almost all foods except for a very narrow few. For kids, eating often means putting something in their mouth for the first time. That first sensation of something in your mouth can be quite aversive at first. And a child is more likely to feel that certain foods elicit a sensory quality that is unpleasant. This is where understanding how the brain creates the sensation of food, with multiple senses contributing, means that a therapist could begin to assess which sensory system is affecting how a child feels about an aversive food.

A lot of the topics in the book made me think about my own personal relationship to food and taste. I don’t know if you’ve ever experienced this, but sometimes I’ll go to a restaurant and notice that although they have Heinz ketchup bottles on the table, the first taste will clearly determine that they’ve filled the Heinz bottles with an impostor brand of ketchup. It infuriates me, and I think it undermines exactly what you lay out in your book:  that the human propensity for taste and olfaction is actually much more sophisticated than we might assume. Can you speak to this?

I haven’t experienced that, but it makes sense. I think one of the simplest ways of giving more credit to smell in flavor is the simple nose-pinch test. You pinch your nose and put a piece of candy or food on your tongue and ask what the flavor is. With their nose pinched, most people will be able to tell that it tastes sweet and that is all. Once you un-pinch your nose, the whole flavor of the food is able to travel to the brain, and that is all due to smell. As the subject breathes out, air goes from the back of the mouth up to the nose. This is a simple experiment that you can do around your dinner table. It gives you a completely new appreciation of where your sense of flavor is coming from. People use their sense of smell to get more pleasure out of the food that they are eating.