As Occupy gears up for a foreclosure campaign, state attorneys general show backbone in tussle over bank fraud 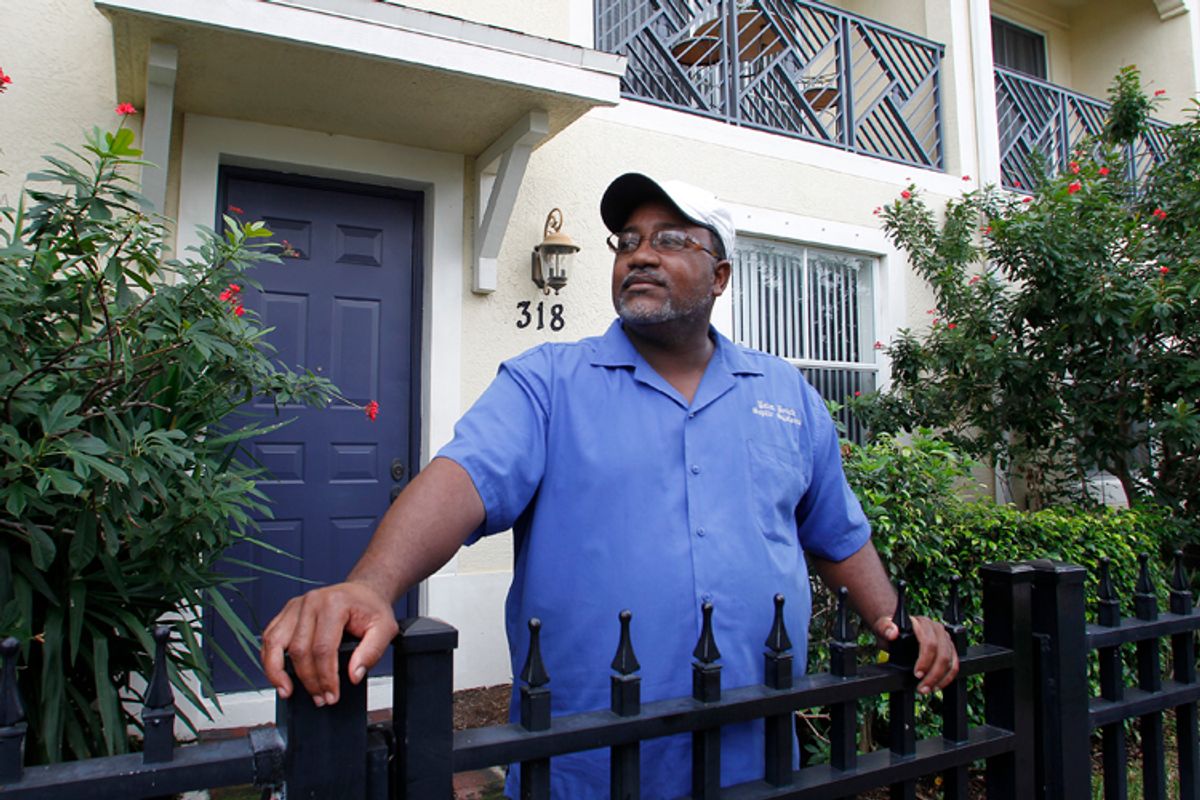 Curtis Jones stands in front of his two-story townhouse in Delray Beach, Fla., in October 2010. Seven years ago, Jones took out a mortgage with Countrywide Financial Corp to buy his home. The company has now launched foreclosure proceedings against him. Jones has fought for more than a year to keep his home from being foreclosed. (Joe Skipper / Reuters)
--

This week, Massachusetts Attorney General Martha Coakley sued five of the biggest banks in the country – including Bank of America, JPMorgan and Wells Fargo – for alleged foreclosure fraud.

As the New York Times noted, the move "diminishes the likelihood of a comprehensive settlement between the banks and federal and state officials to resolve foreclosure improprieties."

And Coakley's suit comes just as Occupy Wall Street organizers are planning a campaign focusing on the foreclosure crisis that will likely feature eviction defenses, protests at banks and the like. The Occupy Our Homes project is launching on Tuesday.

But the foreclosure crisis can be dizzyingly complex, and the issue is still opaque to many Americans who have not been directly affected. For an update on what’s going and to get context on the Coakley suit, I spoke to Alan White, a visiting professor at Tulane law school who has written widely on the foreclosure crisis.

A recent study by the Center for Responsible Lending found that we may be only halfway through the foreclosure crisis. Can you give us a status update on how bad things are right now?

We have this $10 trillion problem. Total outstanding mortgages in the U.S. on houses went from $4 trillion to $10 trillion – it almost tripled – in the decade before the crisis. Since 2007, mortgage debt has barely dropped. While home prices have dropped by 30 percent, the amount we owe on our houses has only dropped by 5 percent. So there’s a huge mortgage debt overhang. There are 6 or 7 million homes where people are behind on their mortgages or in foreclosure. That’s triple to quadruple any kind of levels we’ve seen since the Great Depression.

The foreclosure process is slow, and the process of working out loans one by one in our retail system has been painfully slow. We’re still foreclosing about a million more houses a year. So I think the logic of the Center for Responsible Lending report was right: When you look at all these numbers – the number of people who are behind, the rate at which we’re foreclosing on houses, and the rate at which people are being given alternatives to foreclosure, we’re looking at another five to 10 years of this.

Some Occupy protesters are starting an Occupy Our Homes campaign Tuesday on the foreclosures. They’re calling for banks to write down mortgage principal to current home values. Is anyone in Congress or Washington talking about legislative relief?

In Congress, no. President Obama made a campaign promise that he would support amending the bankruptcy code to do exactly what the protesters are calling for: reduce mortgage principal to the value of the house. He immediately backed off that promise when he got to office. The idea of realigning mortgages with home prices has met with stiff, stiff resistance from the banking industry. So far – amazingly, given the financial crisis – people in Washington and the administration and Congress have continued listening to the complaints of the industry. The fact is, we’re going to do this sooner or later. We can reduce mortgage balances to the value of homes either through the painful process of foreclosing houses, at 100,000 per month for the next 10 years. Or we could have a more systematic program and write the mortgages down for the people who are in the houses now.

The Occupy protesters are talking about eviction defenses where they block sheriff’s deputies from entering a home. Do you think this tactic will make a difference on any level?

It certainly could, if you have enough homeowners saying, “I am here. I can’t afford my mortgage, but I can afford my house.” IF enough people are involved and it’s a broad enough movement, it could bring attention to the fact that we are wastefully evicting and foreclosing and prolonging the crisis. I think it’s absolutely worth doing. The issue of writing down our mortgage debt is a very political issue. Getting the minds of the American people changed is very important. We need to stop seeing it through Rick Santelli’s eyes, and starting seeing it as an issue of helping our neighbors who are in trouble – and also helping ourselves by helping anybody who has steady income stay in their house and pay what they can rather than dumping more houses into an oversaturated market.

Turning to the Coakley lawsuit, a lot of people have the general idea that there’s been fraud in the foreclosure market but don’t understand the specifics. Can you explain?

Foreclosure lawyers have been pointing out for a while that banks didn’t have the paperwork to do the foreclosures correctly. They were foreclosing on people who weren’t behind, they were foreclosing on people who were supposed to be in loan modifications, and they were foreclosing in the name of the wrong company. There were significant false statements being made in court filings to foreclose. There have been settlement negotiations led by Tom Miller, the attorney general of Iowa, along with some of the federal agencies, that’s been going on for over a year now. A couple of the state attorneys general have now said, enough is enough, we’re not getting anywhere.

The idea is that since the industry is foreclosing in ways that are in many cases improper, there needs to be a real foreclosure prevention program and have it funded by the banks. They’ve been talking about a multi-state settlement in the $20-25 billion range. But some of the attorneys general are not persuaded that the banks are really prepared to deal with the problem. The banks have asked for releases from the states that would give them a free pass on anything they did wrong in making the loans in the first case and in foreclosing them.

How big a deal is it that some of the state attorneys general are dissenting from the idea of a comprehensive settlement?

It’s a huge deal. The direction that we’re going to go in solving the foreclosure crisis is tied up to a great extent in the ongoing state-federal regulator negotiations. If the Obama administration had a wholesale mortgage reduction program instead of this retail, one-at-a-time, painfully slow process they have – the Home Affordable Modification Program (HAMP) and the Home Affordable Refinance Program (HARP) — you could combine it with the negotiation with the banks.

There’s leftover money from TARP.  The foreclosure programs the administration designed were partly funded through the TARP bailout. And the only bailout money that hasn't been spent is the bailout money for homeowners. You could take the unspent bailout money and combine it with the money from a bank settlement and start to make a dent in our $10 trillion problem.