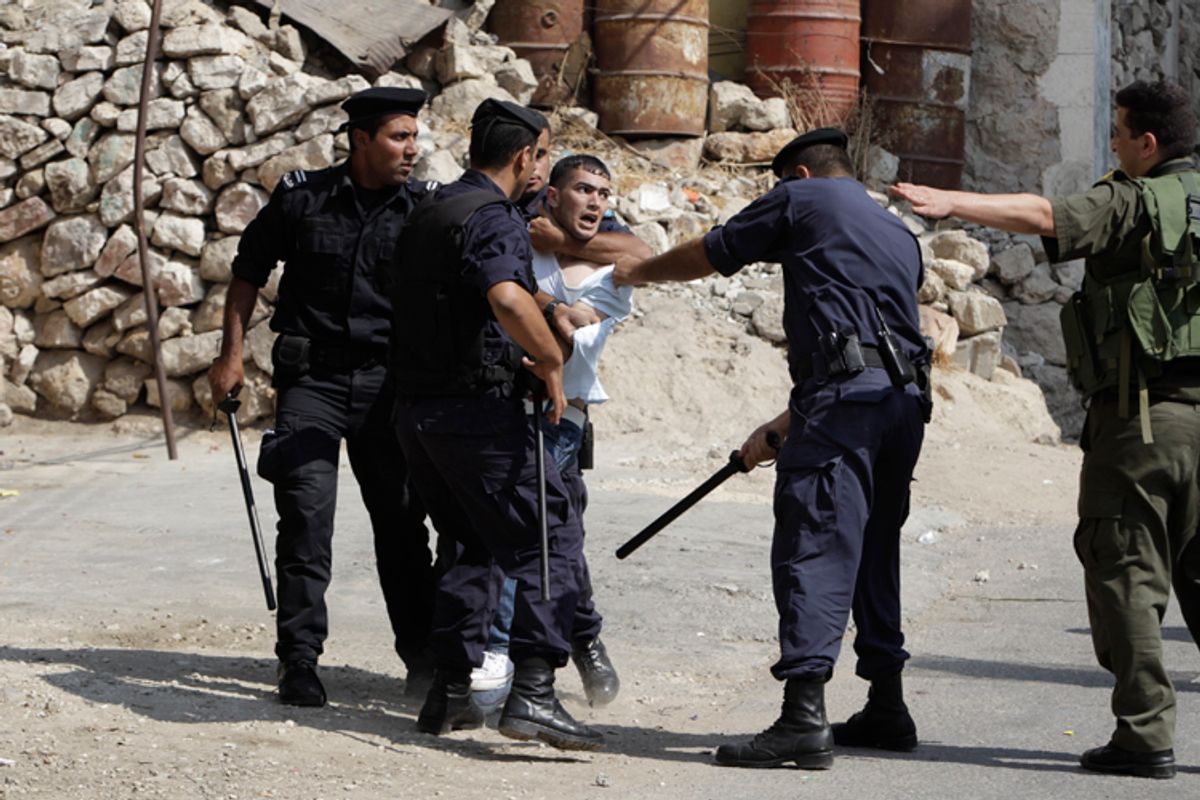 An Israeli soldier gestures as Palestinian policemen detain a youth during clashes in the West Bank city of Hebron September 21, 2011. (Ammar Awad / Reuters)
--

On the June 18, 2007, a nonprofit organization called the Hebron Fund held a fundraiser on a cruise ship in the Hudson River to support Israel settlers’ occupation of a Palestinian house in the West Bank city of Hebron. Some 250 people paid a minimum of $65 each for the “Cruise ‘n’ Schmooze.”  The proceeds went to support the settler who had taken the property from the Rajabi family, who denied the settlers' claims that they had legally purchased the home.

A year and half later, Israeli police using stun grenades carried out a government order to evacuate a group of some 100 settlers hunkered down in the four-story hilltop. The house had become the center of a crisis when the Israeli government ruled that the building had been illegally seized from the Rajabi family, and ordered the settlers out.

Once evicted, the settlers commenced a rampage that lasted several hours, setting fire to Palestinian houses, olive trees and cars. Twenty-five people were wounded, including a man in critical condition after a settler shot him at close range. A Palestinian Red Crescent official told U.S. Consulate officials that during the riots, settlers stopped an ambulance and defaced the ambulance, painting "let the Arabs die" and covering the red crescent symbol with the Star of David.

The Hebron Fund is just one of more than 40 organizations that have raised some $200 million over a decade in tax-exempt donations for Israel’s West Bank settlements, a project that places them in violation of U.S. foreign policy and international law.

U.S. presidents from both parties have opposed settlements in occupied Palestinian territory since Israel seized the West Bank and Gaza in 1967. Early in his administration, President Obama made settlement expansion a centerpiece of his now-defunct push to renew negotiations between Israel and the Palestinian Authority.

The State Department reiterated this policy last June, saying in a statement, “Like every American administration for decades, we do not accept the legitimacy of continued settlement activity.”

Despite official opposition to the settlement enterprise from the White House and State Department, the U.S. Treasury gives tax breaks to groups whose sole purpose is to raise funds for the settlements. These groups have collectively raised more than $200 million over 10 years.

“Maybe on their website they have 'donate $100 to education in Hebron' but really the $100 goes to security,” said Abed Ayoub, an attorney at the Arab American Anti-Discrimination Committee. “Really they turn around and they’re buying machine gun stands.”

Ayoub also said settlement-backing charities violate the law by funding discrimination, since, by definition, settlements and their schools, roads and other infrastructure are not open to Palestinians, often the very people whose land these institutions are built on.

“Would we sit back and allow a school in the middle of Los Angeles not allowing black students?" said Ayoub. "There would be an uproar, rightfully so."

In recent years the Hebron Fund has been written about by Matt Duss in the American Prospect and by Justin Elliott in Salon. The group was assailed by bloggers and activists in 2009 when it planned a fundraiser at the Mets’ Citi Field.

The group raised between $1.2 million and $2.2 million a year for each of the last several years. The organization’s website says its mission is to raise funds for “parks, playgrounds, recreation centers, after-school programs, libraries, and summer youth activities; as well as sponsorship of public cultural and educational events” for the settlers in Hebron.

There is no evidence directly linking Hebron Fund’s activities directly to settler attacks on Palestinians, however, as the 2008 house incident showed, the settlers’ very presence can result in violence and violations of Israeli law. In addition, money raised by the Hebron Fund may support settler violence indirectly, for example, by paying legal fees for settlers arrested in connection with attacks.

The Hebron Fund also stands out because of its support for a militant fringe of the settler movement. Public records in the U.S. and Israel show that the Hebron Fund uses funds from American donors to support the activities of specific settlers who have been convicted of deadly armed attacks on Palestinians in the past.

Hebron Fund officials did not return several phone calls seeking comment for this article. In Hebron, settler spokesman David Wilder refused to discuss the specifics of his organization’s funding or activities. “Organizations do not deal with those kinds of questions, not with journalists, not with anybody else,” he said.

Hebron is a city of more than 160,00 people in the southern West Bank, and is best known as the site where the biblical matriarchs and patriarchs are buried. The tomb, known as the Cave of the Patriarchs, is also the site of the Ibrahimi Mosque, so called because of its association with Abraham.

Israeli forces occupied Hebron along with the rest of the West Bank during the June 1967 war. A small group of Israeli settlers rented a hotel in the center of the city on Passover 1968 and then refused to leave, creating the kernel of what became the present day settlement.

The city was divided by an agreement signed in 1997 by Israeli Prime Minister Benjamin Netanyahu, who was then serving his first term, and Palestinian President Yasser Arafat.

The agreement, part of the phased redeployment of Israeli forces during the Oslo peace process, placed most of the city under Palestinian Authority control. A smaller portion, labeled “H2,” remained under direct Israeli military occupation. H2 is the location of the settler compounds supported by the Hebron Fund.

Because of Israeli military rules, much of what was Hebron’s city center is today off-limits to its original Palestinian inhabitants. A survey by the Israeli human rights group B’Tselem found that 1,014 Palestinian housing units in the city center have been vacated by their occupants. Another 1,829 businesses have also been abandoned.

Also living in this virtual ghost town are 800 settlers, many of them staying in “evacuated” Palestinian homes.

The H2 sector of Hebron is also an epicenter of settler violence against Palestinians. Human rights groups have long documented near-daily incidents of stone throwing, beatings, stabbings, hit-and-runs, and other violence on the part of the settlers in the area. A 2008 United Nations report on the issue found that 31 percent of all West Bank settler violence occurred in H2, and 42 percent in the Hebron governorate.

Public records in the U.S. and Israel show that the Hebron Fund maintains deep ties to the radical fringe of the Israeli settler movement.

Tax documents show that the Hebron Fund sends money directly to its Israeli sister organization whose director and founding officers include two men convicted by the Israeli government for their roles in deadly attacks on Palestinians carried out by the Jewish Underground in the 1980s.

The Jewish Underground carried out a string of armed attacks on Palestinians, and even plotted to blow up the iconic Dome of the Rock mosque in Jerusalem. The group was shut down when Israeli police arrested 27 people over those and other attacks.

One of the founders of the Hebron settlers’ organization, which receives Hebron Fund money, Ze’ev Friedman, was convicted in connection with a pair of car bombings in 1980 targeting the mayors of two Palestinian cities. In one blast, Nablus Mayor Bassam Shakaa lost both his legs. In the other attack, Ramallah Mayor Karim Khala lost one leg.

Another man, Menachem Livni, was sentenced to life in prison after being convicted of planning a 1983 machine gun and grenade assault on students at the Islamic College in Hebron. Three students were killed and 33 others wounded in the attack.

Livni and two accomplices were released in 1990 after Israeli President Chaim Herzog commuted their sentences in response to a pressure campaign by the Israeli right. Today, Livni is still listed as the director-general of the Hebron setters’ nonprofit organization, which receives about half of its financing from the Hebron Fund.

A third man listed as a founding member of the same nonprofit group handling Hebron Fund money is Moshe Levinger, who first established the Hebron settlement. Levinger has been arrested and charged at least 10 times in connection with violent crimes. In the 1980s and 1990s he served four separate prison terms for rioting, assaulting an Israeli officer, and disrupting Muslim prayers. In 1988 he was jailed after accepting a plea bargain for shooting a Palestinian shop owner dead.

Very little information about the Hebron Fund’s operations exists in the public record. In the section of the group’s tax filings where is is asked to “describe the organization’s mission,” the response is a mere five words: “Social and educational well being.” Nowhere is it mentioned that the group’s activities are overseas.

However, some details are available. An Israeli accountant’s audit, obtained by this reporter, found that the settlers’ organization (called “Mehadshei Hayishuv Hayeuhudi Behevron”) received 45 percent (about $737,000) of its 2003 income from the Hebron Fund. The Israeli group’s Israeli tax returns show that that figure grew to 55 percent in 2008, the last year for which records were available.

Though little information is available, it appears those funds are raised from a range of American donors, including wealthy foundations like the Jewish Communal Fund.

Other known backers include Irving Moskowitz, a billionaire gambling magnate who is a major funder of a number of West Bank settler groups. Another supporter was Häagen-Dazs ice cream creator Ruth Mattus, who died in 2006.

Much of this money is raised at lavish fundraisers in New York City, including an annual $300-a-plate dinner. In 2010 the group took donors on a cruise it called the “Hebron Aid Flotilla,” a jab at the pro-Palestinian Gaza flotilla earlier that year.

This year’s event was held Dec. 3 at the New York Hall of Science in Queens. The event featured video messages, one recorded by former presidential candidate and Arkansas Gov. Mike Huckabee, and another from Florida Rep. Allan West, the Tea Party stalwart.

Listed as a member of the dinner committee for this year’s event is Morris Abraham, the Brooklyn man who claimed to have purchased the Rajabi home in Hebron where the confrontation with police occurred in 2008.

In this neighborhood, the Abu Ayesha family lives on one side of a dead-end street. On the other, settlers. The Palestinian Authority helped the Abu Ayeshas install metal screens on the exterior of the house to protect it from rocks thrown by settlers, giving the whole building the appearance of a cage.

When B’Tselem, the Israeli human rights monitors, distributed cameras to the Palestinians living in the caged house in 2007, they recorded startling scenes of settler children throwing stones at the cage. In what became something of an iconic video, a settler woman peers through the screen repeatedly hissing, “Whore! Whore!” at a woman inside.

That's what the Hebron Fund is paying for with tax-deductible U.S. contributions.