No, the U.S. is not leaving Iraq

Thousands of armed U.S. private contractors will be based in the country, and the potential for violence is real 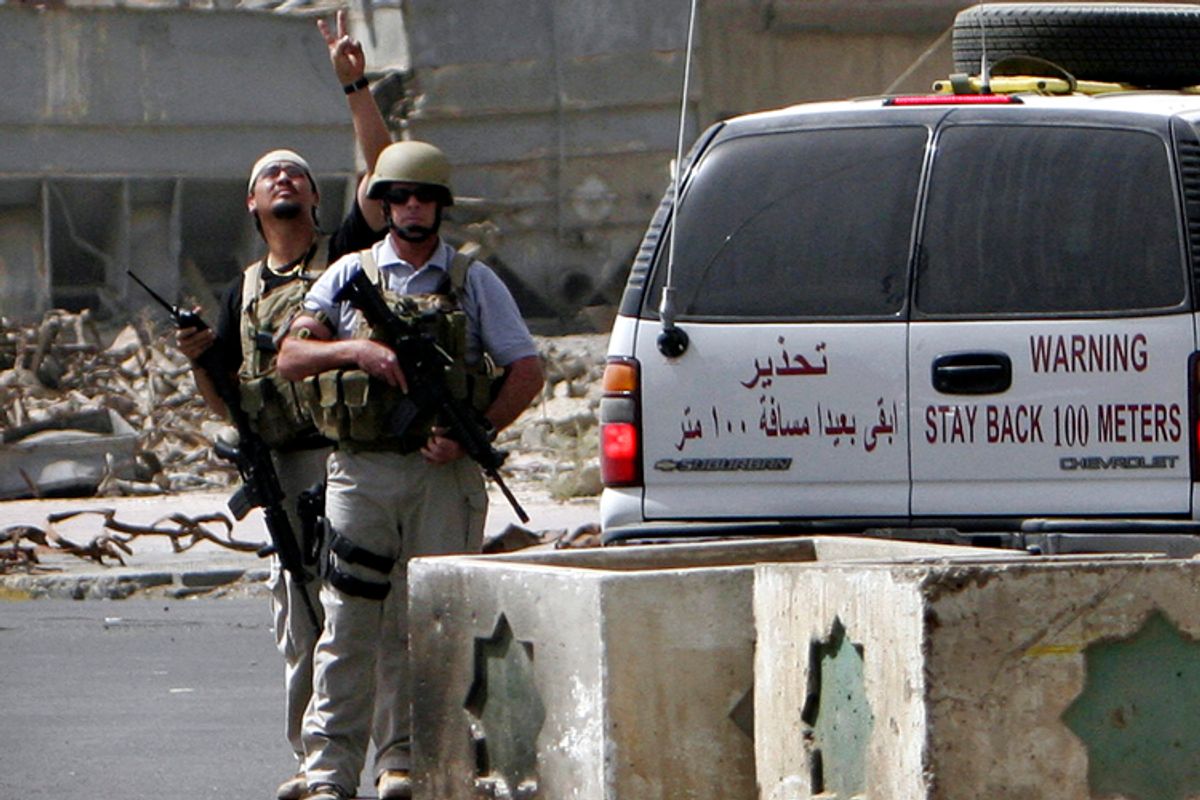 In a speech at Fort Bragg, N.C., Wednesday, President Obama declared that the war in Iraq is over.

"I’ve come to speak to you about the end of the war in Iraq," he told gathered troops. "Over the last few months, the final work of leaving Iraq has been done. Dozens of bases with American names that housed thousands of American troops have been closed down or turned over to the Iraqis.  Thousands of tons of equipment have been packed up and shipped out. Tomorrow, the colors of United States Forces-Iraq -- the colors you fought under -- will be formally cased in a ceremony in Baghdad."

All the specifics were true. But what about Obama's claim that the war has come to a end?

The truth is more complicated. It turns out the Obama administration is leaving behind a huge contingent from the State Department along with thousands of armed private contractors. The possibility for violence between Americans and Iraqis is very real.

To dig into the details, I spoke to Spencer Ackerman, who has been covering the issue closely for Wired's Danger Room.

The administration is saying the war is over. Is the Defense Department leaving anyone behind?

There's going to be something called the Office of Security Cooperation in Iraq that exists after the troop pullout on Dec. 31. That's going to be under the auspices of the U.S. embassy, so there's not going to be a military command in Iraq. It's going to be a pretty small, 150-person office that will do training -- things like helping the Iraqi air force understand how to operate the F-16s we're selling them. That's a pretty typical relationship for countries who have bought American military hardware.

What about the State Department?

State is going to leave behind the largest embassy that it has on the planet. All told, there are going to be 18,000 people who work for this embassy. Very few of those will be diplomats. Others will be American civil service workers. A great number will be non-Iraqi contractors who do things like the laundry, mail services, cleaning, etc. Then there's going to be a substantial component of armed private security contractors. Depending on whose numbers you believe, there will be 3,500 to 5,500 of them.

What is the mission of the State Department there?

It will be different than a typical embassy in the sense that Iraq is still a more dangerous place than most places the U.S. operates. There are more fortresslike consulates around the country than is typical. The mission is in theory like any other State Department mission: You manage commercial ties; you deal with bilateral political issues as they arise; you try to get favorable security cooperation. In reality, it's going to be way different than usual. Iraq is going to be a battleground -- using that term colloquially -- between the U.S. and Iran. A hugely important mission of the U.S. ambassador in Iraq will be to try to get Iraq's foreign policy not to back Iran. Look at the recent Arab League vote to condemn the regime in Syria, for example. Iraq abstained from that vote because Iran was upset about the condemnation of one of its proxies. So the U.S. will try to weaken Iran's diplomatic ties to Iraq.

On the mercenary -- or armed private contractor -- front, do we know who these people are going to be and what they're going to be up to?

One is a big security company that's been in Iraq since 2005 called Triple Canopy. Another is called Global. Another is SOC Inc. Interestingly, the CEO of Blackwater -- now renamed Academi -- told me on Monday they're going to get their license back; they lost it after the Nisour Square massacre. They don't have a contract to do work in Iraq now, but they want to do it again. Beyond that, we know nearly nothing. The State Department has stonewalled even the Special Inspector General for Iraq Reconstruction from finding out basic information like what the rules of engagement for the contractors will be. How close can Iraqis get to U.S. diplomats before these guys can open fire? I don't know the answer to that. Most members of Congress don't know the answer to that. Pretty much no one who doesn't work in the State Department knows the answer to that.

The contract is for diplomatic protection. You're not supposed to see Triple Canopy employees, say, go out on raids. Fifty-six days before the U.S. withdrawal, the State Department also put out a contract for aviation support. That's an indicator of how this is being put together on the fly. It's also an indication that the State Department is contracting for missions as sensitive as Medevac or close air support.

Do you think we're going to see spasms of violence between Americans and Iraqis post-Dec. 31?

I think it's inevitable. Look at it from the perspective of an Iranian Quds Force operative. You know you want to frustrate the U.S. in Iraq; and you know that Iraqis are burning U.S. flags in celebration of the withdrawal. That's a tremendous opportunity for Iran right there. Because if you also know that there are these armed contractors helping diplomats get from point A to point B, you win if you provoke them into violence. And it's really easy to place an IED on a road or to open fire on a convoy. Then if there are Americans in Iraq opening fire on Iraqis -- after the Iraqi leaders have said Americans are gone -- that's a major propaganda win for Iran. This is a really foreseeable disaster.

Another thing worth pointing out is that Leon Panetta has been saying recently that there are 1,000 Iraqis who are al-Qaida loyalists. If that's true, Iraq is by far host to the largest al-Qaida presence in the world. It's really hard to believe the CIA and the Joint Special Operations Command won't find a way to go after those people. And remember, as Mary Wheeler has pointed out, Congress has not rescinded the authorization for military force in Iraq.

So in your estimation, is the war actually over?

It's going to shift into a more sotto voce form. It's going to be a lot subtler. But it most certainly is continuing. Just because we don't have a U.S. troop presence anymore or a formal U.S. chain of command anymore, does not mean that the war is over.