And if the Newt free-fall doesn't stop...

He's dropped to third place in Iowa. If his unhinged judge-bashing doesn't save him, where will the right turn? 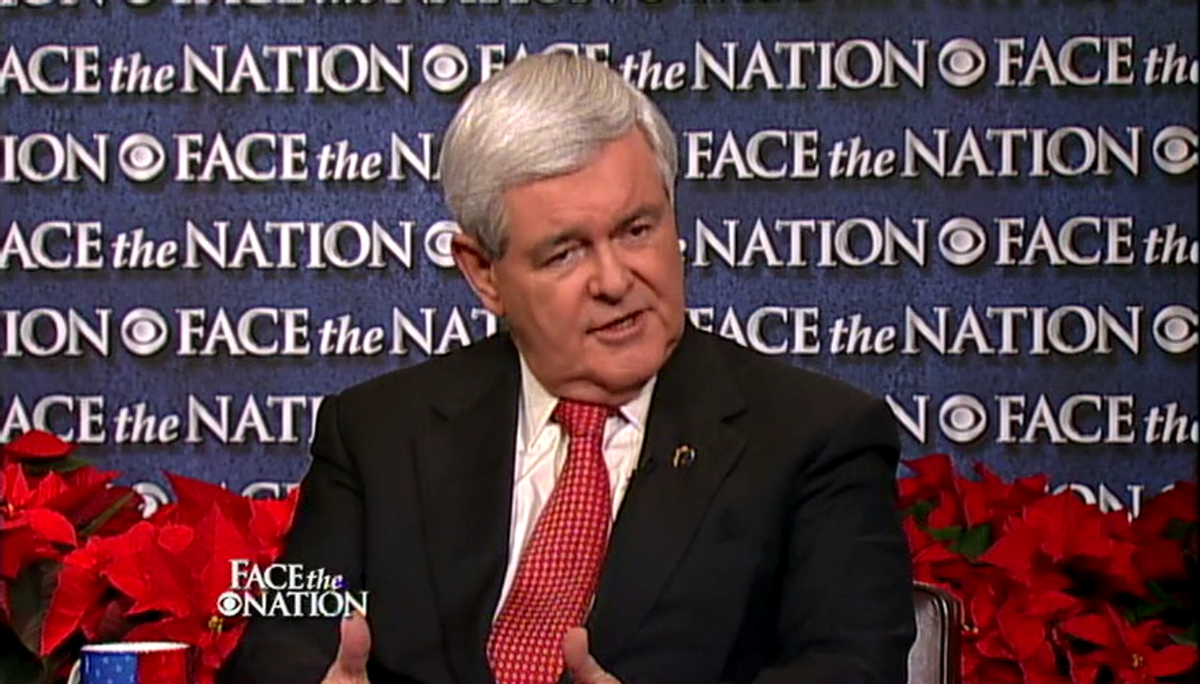 Newt Gingrich's support has clearly taken a hit in the last week, and while it's still too soon to say for sure, he may be in the midst of a full-scale meltdown.

New Iowa data from Public Policy Polling released overnight show the former House speaker plummeting to third place in the lead-off caucus state, with just 14 percent of the vote. The new Iowa leader, according to PPP, is Ron Paul with 23 percent, followed by Mitt Romney at 20. At the national level, the latest numbers from Gallup's daily tracking poll have Gingrich nursing a 4-point lead over Romney, 28-24 percent -- a far cry from the 38-23 percent advantage he enjoyed in the same poll just over a week ago. Paul is at 10 percent in that survey.

Clearly, the influential Republicans who have been aggressively challenging Gingrich's ideological credentials and character are having an impact. And they aren't letting up, either, with the Murdoch-owned Wall Street Journal issuing a harsh editorial over the weekend that took Gingrich to task for his "lack of candor" in discussing the $1.6 million he received from Freddie Mac. The anti-Newt attacks ads from a Romney-aligned Super PAC in Iowa are a factor, too.

To counter this, Gingrich has apparently decided to make a radical, constitutionally dubious assault on federal judges -- a favorite right-wing punching bag for decades -- the centerpiece of his message. He emphasized it during last Thursday's debate, winning loud applause from the crowd (after eliciting little support from them when the Freddie Mac issue was raised), then generated more attention with a Saturday conference call in which he said that presidents have the right to ignore rulings from "elitist judges" in "extraordinary situations." Gingrich went even further on CBS's "Face the Nation" on Sunday, claiming that the law of the land should be set by a consensus of two of the three branches of government -- even if that means Congress and the president overriding the Supreme Court.

This may just accelerate Newt's demise, given that the extreme nature of what he's calling for has already prompted some prominent conservatives to blast him. Michael Mukasey, who served as attorney general under George W. Bush, called Gingrich's ideas "dangerous, ridiculous, totally irresponsible, outrageous, off the wall" and said they would "reduce the entire judicial system to a spectacle." If the same opinion-shaping voices that have already been attacking Gingrich now shred him over this, it might simply reinforce whatever doubts rank-and-file Republicans have about his maturity, stability and electability. The other possibility, though, is that Gingrich will tap into the GOP base's deep, generations-old resentment of and hostility to the federal courts, that these voters will regard attacks from Mukasey and others as proof of what a "bold" outsider Gingrich is, and that they'll rally around him as a result.

If judge-bashing doesn't do the trick and the Gingrich free-fall intensifies, the immediate question will be what it means for Iowa, which will hold its lead-off caucuses in 15 days. If Gingrich fades from contention there, it might increase the likelihood of a Romney victory -- an outcome that could then set off a domino reaction leading to Romney claiming the nomination with unprecedented ease. Or it could elevate a new candidate to serve as the consensus conservative alternative to Romney in subsequent states. Here's a look at how the other candidates are angling to capitalize in Iowa on a Gingrich implosion:

Mitt Romney: He was endorsed over the weekend by the state's largest newspaper, the Des Moines Register, and there has been some evidence to suggest that Gingrich's supporters are open to backing him as their second choice. This would be a significant departure from the pattern that has made the '12 GOP race so volatile: Until now, every time a non-Romney candidate has surged and faded in the polls, his or her supporters have simply moved to another non-Romney candidate. But with the caucuses approaching, Iowans are more engaged now, and Gingrich's recent rise also spooked some influential conservatives into vouching for Romney, whom they see as far more electable. So maybe for the first time Romney will benefit directly from an opponent's flameout, propelling him to a potentially decisive Iowa triumph.

Ron Paul: He's running at the top in Iowa in the new PPP poll and near it in others, and his campaign is probably the best-organized in the state, where he has more appeal to Christian conservative activists than you might expect. If voters on the right really are determined not to hand Romney a victory in Iowa, then they could decide Paul is their best bet simply because he's much-better positioned in the polls than any other candidate. The problem for Paul is that some of the most influential Republican Party players -- most notably, the Fox News Channel -- clearly do not want him to win Iowa or anywhere else and are now scrambling to tear him down. So expanding his base will be a particular challenge for him.

Michele Bachmann: She's running at about 10 points in Iowa right now, so a comeback isn't entirely out of the question. Bachmann seems to know this, which is why she's played a leading role in attacking Gingrich and has also turned her guns on Paul, whose views on Iran she blasted in last Thursday's debate. When Paul responded the next night on "The Tonight Show" by saying that Bachmann "hates Muslims," it spurred a highly public weekend-long war of words that likely did Bachmann more good than Paul among the Christian conservative-dominated Iowa GOP base.

Rick Perry: He sits roughly where Bachmann does in Iowa polling, but he also has more money and is spending heavily on television ads -- one of which caused a national stir by suggesting the end of the "don't ask, don't tell" policy was part of a "war on religion." Perry and his team seem well aware that 60 percent of Republicans who participated in the 2008 caucuses identified themselves as evangelicals and are angling hard to appeal to that constituency (even if it means offending the non-Christian right).

Rick Santorum: The good news for Santorum: Albert Calaway, a politically active pastor in Iowa, endorsed the former Pennsylvania senator over the weekend, and took some serious shots at the rest of the field while he was at it. Calaway also called on Bachmann to withdraw and urge her supporters to support Santorum. The bad news for Santorum: Even though he's tried harder than anyone else in Iowa and seems on paper like a sensible option for true believer conservatives, he remains the only candidate who hasn't enjoyed even a brief surge in any national or early state poll this year. He is at 10 percent in the new PPP poll, the closest thing he's had to a breakthrough so far, so maybe this is finally his moment. Or maybe there's just something about him that makes Republicans say, "Thanks, but no thanks."