Under attack from e-books and e-commerce, bookstores fight back by creating their own unique titles 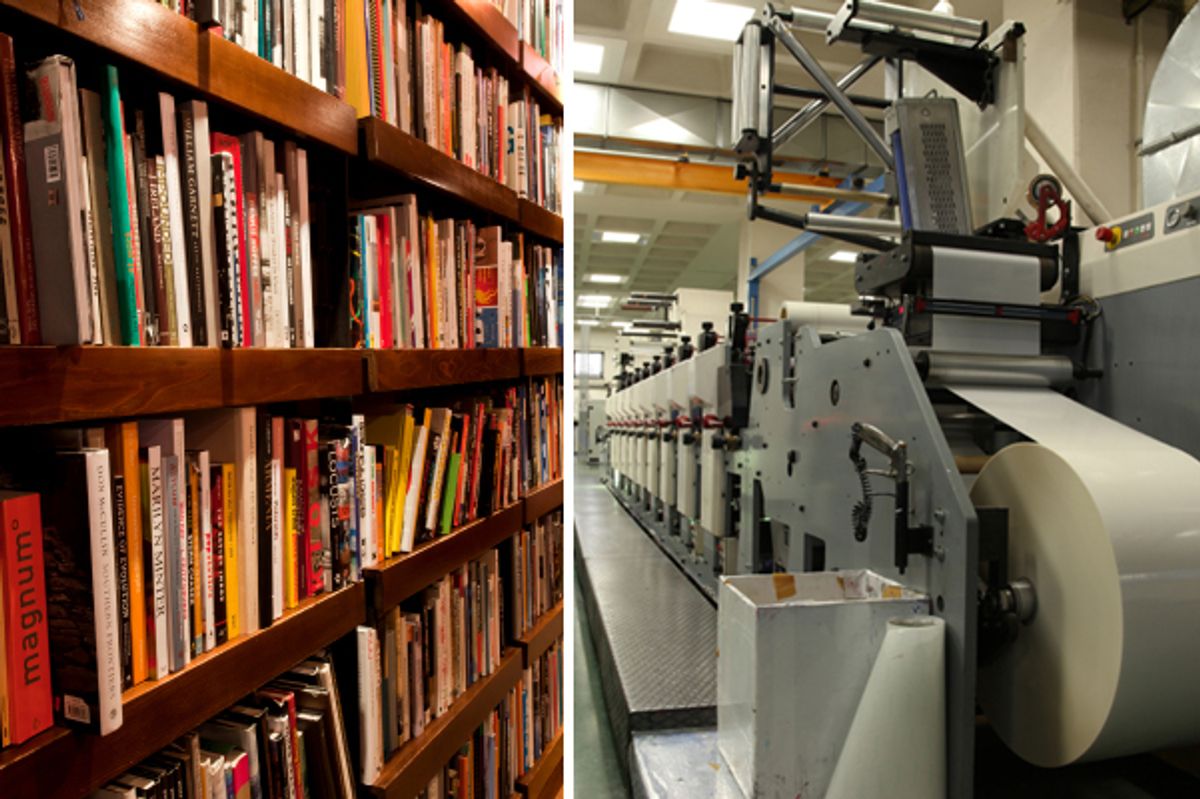 Of all the booksellers I’ve met over the years, no doubt the busiest is Mitchell Kaplan. In addition to overseeing Miami’s venerated Books & Books stores, Kaplan is a co-founder of the Miami Book Fair, a former president of the American Booksellers Association, and the most recent recipient of the National Book Foundation’s Literarian Award. So it was pretty surprising to see Kaplan himself when I read at his flagship store in Coral Gables last month.

Even more striking was the book Kaplan giddily showed me: a new anthology of stories by South Florida writers called "Blue Christmas: Holidays Stories for the Rest of Us." (As a former Miamian, I’d written a piece for the collection.)

“Isn’t it beautiful?” he said, gazing at the deep-blue cover.

Kaplan is a guy who gets excited about all sorts of books. The difference, in this case, is that he published "Blue Christmas." More precisely, his new imprint, B&B Press, released the book. It thus represents a heartening trend in the brave new world of publishing. Rather than trimming their sails, a number of independent booksellers are taking a page from Amazon by producing titles themselves.

Kaplan assured me his decision to launch a publishing arm had nothing to do with the online giant’s recent ploys, which include a notorious attempt to enlist readers as, essentially, retail spies.

His impetus, in fact, was the desire to publish a special limited edition of Les Standiford’s "Last Train to Paradise" to mark the centennial of Henry Flagler’s railway. At the same time, Kaplan explained, the local novelist John Dufresne “had this wonderful idea for 'Blue Christmas,' and since we had a team together, I thought, why not two at the same time? After all, there’s a tradition of bookstores as publishers. Shakespeare & Company published 'Ulysses.' City Lights published 'Howl.'”

As publishers, indies enjoy a few distinct advantages over the competition. First, they can emphasize titles of local interest by local writers. Second, they can showcase the books in their shops. Third, because of advances in printing, they can bring books to market more quickly than traditional publishers. Just as important, when an independent bookstore sells a copy of one of their own titles, they collect all the profits, rather than a sliver. Consider it a poor man’s version of vertical integration.

Kaplan told me he hoped other bookstores would take up small-scale publishing. That’s already happening.

Consider Malaprops, in Asheville, N.C. When I arrived there for a reading a few weeks after my trip to Miami, general manager Linda Barrett Knopp was eager to talk with me about the revival of Burning Bush Press, Malaprops' publishing arm, and its new title, "Naked Came the Leaf Peeper," a wonderfully goofy serial novel in the spirit of the serial mystery "Naked Came the Manatee." Leaf Peeper includes chapters from Carolina literati ranging from Tony Earley to Fred Chappell.

Barrett Knopp said the Burning Bush relaunch was intended to mark the store’s 30th anniversary. But getting back into publishing has been on the agenda for a while. “We originally thought about purchasing an Espresso Book Machine,” she explained, referring to the on-site machine that some stores use to produce library-quality paperbacks in minutes. They quickly realized it would be cheaper, and more efficient, to adopt the small-press model.

One of Barrett Knopp’s inspirations was her own husband, Brian Lee Knopp, who started his own press to publish a memoir of his years as a private eye, "Mayhem in Mayberry," Malaprops' top seller in 2011. That book’s success demonstrated not only the author’s irreverent appeal but also the power of Malaprops itself as a commercial vehicle. After all, as authors have long known, it’s the folks on the front lines that direct loyal customers to particular titles.

In this sense, Malaprops is simply taking advantage of what indies have always done best: serving as de facto community centers and literary recommenders. “We already have a long list of presales for 'Leaf Peeper' and the local buzz is growing,” Barrett Knopp said. She anticipates publishing two or three more titles in 2012 and envisions a day when Burning Bush will expand its purview to include regional books that are now in the public domain. Other area writers are already clamoring to be part of the effort.

Just down the road from Malaprops, in Spartanburg, S.C., I visited an indie that exemplifies this new model of the bookstore as publisher and purveyor. Hub City Books is an outgrowth of the Hub City Writers Project, which was launched 15 years ago to support local writers. The centerpiece of the project was Hub City Books, a small press that has published some 50 titles, including works by area luminaries such as Ron Rash and George Singleton.

For most of its history, Hub City sold its titles at Pic-a-Book, Spartanburg’s sole independent bookstore. Then, four years ago, Pic-a-Book went under. “We took a real financial hit,” explained Hub City’s executive director Betsy Teter, “because hometown sales were our bread and butter. And Barnes & Noble wasn’t doing the job for us. We couldn’t get the display we needed.”

As she lay in bed fretting over how to recover the lost sales, an idea hit Teter “like a bolt out of the blue”: Hub City should open a store. She found a location downtown, an abandoned Masonic Temple, launched a capital campaign that raised $300,000 to fix up the site, and opened for business in July 2010.

The building now houses the bookstore and the press, along with a coffee shop and bakery that rent space from Hub City. “We can get full retail price for our press titles here,” Teter told me, “versus giving up 60 percent at the B&N across town.”

Just as important, the store serves as a literary nexus that local residents are eager to support. Membership donations, offered at the register, have increased from 300 to 600 over the past year. Local writers hang out and browse. “Donors like seeing this bookshop on Main Street,” Teter said. “Plus sales in the second half of 2011 are up 8 percent over the same period last year, so we’re happy.” From what she can tell, Hub City represents an entirely new model: the bookstore as the public face of a nonprofit that also publishes and offers writing programs.

The leap into publishing by indies can be seen as the literary equivalent of the locavore movement. It not only emphasizes local writers, and local subjects, but also asks residents to support a local business with their dollars.

Teter is under no illusion about the forces arrayed against independent bookstores, not the least of which is the rise of electronic books. But she, along with her compatriots, is cautiously optimistic that small-scale publishing can be part of the answer, by providing an alternative to traditional publishers and Amazon, which are increasingly focused on books they can turn into national bestsellers.

As Kaplan reminded me, the true value of a great independent bookstore resides in its connection to a particular community: “If someone loves our bookstore, has been coming in for years, understands what we’re trying to do, and you can put a great book in their hands that was published by our store, I mean, who’s going to say no to that?”