A tax return compromise for Romney

His dad released 12 years of records when he ran for president. Mitt's only promising one. How about six? 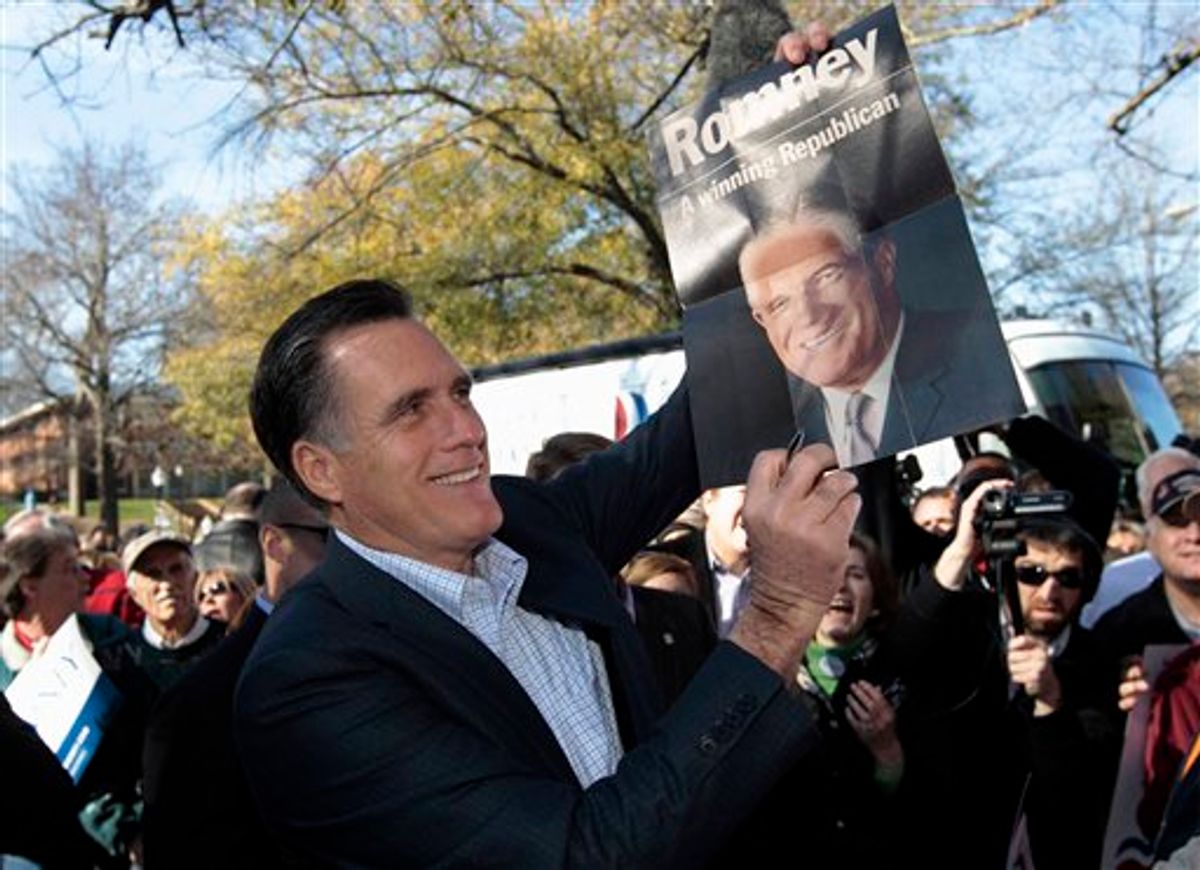 Mitt Romney's tax return troubles are only getting worse. I think he's trying to inoculate himself from some of the blowback he's sure to get when he finally releases them – one year only, 2011, and not until April – by warning us about some of what's in them. On Tuesday he said he only pays around 15 percent in taxes because the bulk of his interest comes from investments, which are taxed at a much lower rate than income. He also told us he makes some money in speaking fees, but it's "not very much." Only $374,000, which puts him in the top 1 percent of American earners – even before you add in all that investment income. He really is the perfect frontman for the interests of the top 1 percent.

On Wednesday ABC News reported that Romney and his former employer Bain Capital have millions in offshore accounts in the Cayman Islands, which help reduce their tax rates, though they don't eliminate U.S. taxes. Citizens for Tax Justice told ABC that offshore accounts cost the U.S. Treasury some $100 billion a year. The Romney campaign is pushing back on the ABC News report, confirming the candidate has investments in Cayman Islands funds while insisting they aren't taxed at a lower rate. But the campaign would not say how much was invested in overseas tax havens, or why. The steady flow of news and rumors about Romney's wealth and taxes will continue. His evasions only make every tidbit more newsworthy. He's got to release his tax returns – and he ought to release more than one year's.

Unbelievably, even his supposed ally New Jersey Gov. Chris Christie said Romney should release his tax returns today, in appearances nominally scheduled to boost the former Massachusetts governor. Even Christie acknowledged the normal protocol is to release them going back several years:

The way that I’ve conducted myself in my public life all along is I’ve released all of my tax returns. And I did it during the campaign — went back a number of years and released my tax returns. And I released them every year after I filed them — right after I filed them — to the public in New Jersey so they can see everything. And I think that’s the right way to go and that’s what I would tell Governor Romney to do. Now, he says he’s going to release them in April. I hope he does. The fact of the matter is, that’s what I would advise him to do.

On "Hardball" Wednesday I noted that Mitt's father, George Romney, released 12 years of tax returns, when he ran for president in 1968, and they showed he didn't avail himself of many loopholes commonly used by the wealthy to minimize what they pay. If Mitt wants to be half the man his father was, I joked, he should release six years. That was probably unfair. In this hypercharged political environment, when there's new interest and outrage over the way the super-wealthy have rigged tax rules and other regulations for themselves, it would take courage to release six years. But Romney doesn't have much of an alternative. One year, 2011, certainly won't do; everyone knows that gives him time to clean up his accounting, minimize his use of loopholes and maximize his one-year tax rate. Twelve years is a politically unrealistic demand but one year would be politically foolish.