Demonizing the decent guy who is president

Will the crazy-nasty GOP attacks on Obama provoke a voter backlash to defend the flawed but human Democrat? 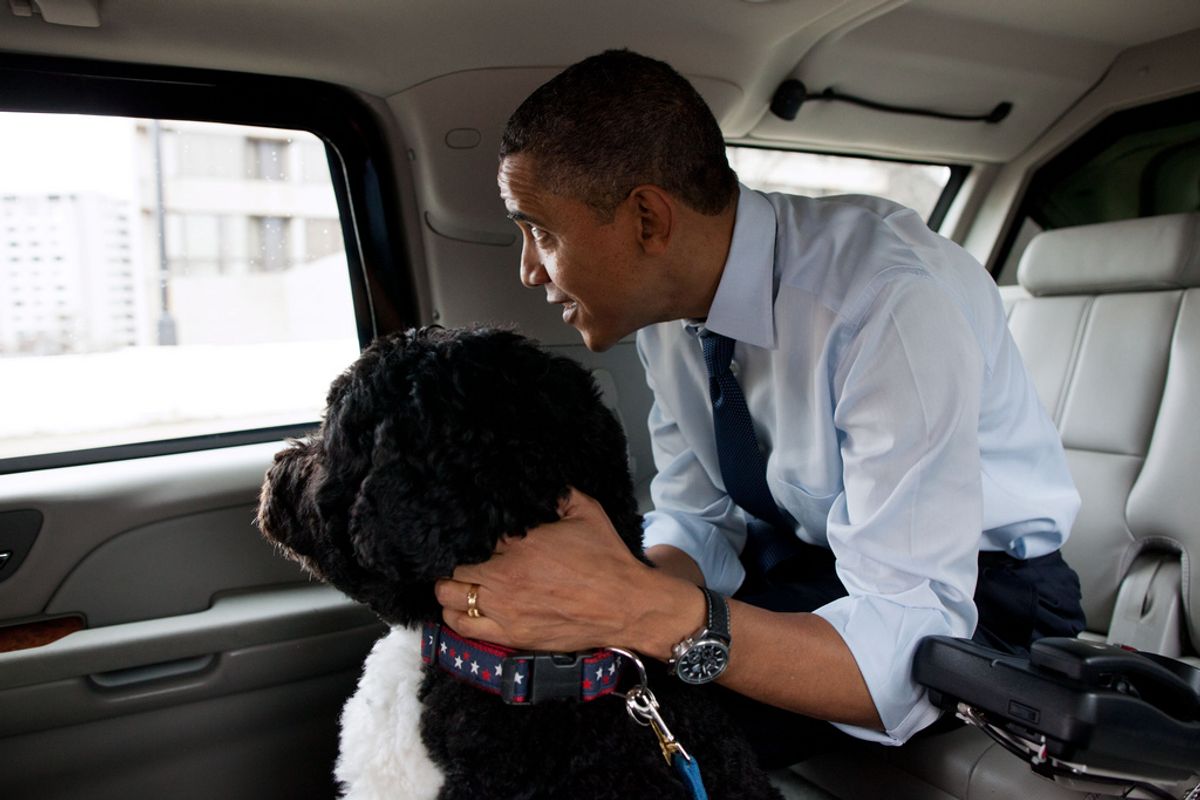 Every week Republicans hit a new low in the way they attack President Obama. On Sunday Republican National Committee chairman Reince Priebus compared Obama to the Italian captain now accused of manslaughter for recklessly sinking and abandoning a cruise ship. Arizona Gov. Jan Brewer is raising money from Tea Party Obama-haters for shaking her sharp, accusing finger under the president's nose, then claiming she felt "threatened" by him, and now acting like she deserves credit for standing up to the tyrant of the free world. The sad GOP primary goes on, with Mitt Romney and Newt Gingrich savaging one another but always saving their most lowdown insults  for the president.

That's why David Axelrod hit a nerve -- or a funny bone -- when he sent the photo that graces this story to his Twitter followers Monday, with the quip: "How loving owners transport their dogs." Total cheap shot, playing on the most nagging though politically debatable hit on Romney: That he strapped his Irish setter Seamus to the roof of the family station wagon, in a regulation dog travel crate, for a long ride, and when the dog didn't do well, merely hosed off the car as well as Seamus, then put him back in his crate on top of the car and got back on the road. The increasingly timid and fussy Politifact has dinged Gail Collins for her frequent references to the story, but it dogs Romney (sorry) because of the animatronic ambition it symbolizes.

I don't agree with every move the president has made. But I think the more Republicans try to demonize him, the more most American voters will see the difference between the GOP caricature and the man they've come to know. I get more pro-Obama with each vicious anti-Obama attack. I'm sure the rest of his base does, too. That's why Axelrod's photo tweet, in its own way, became a small version of the Romney/Seamus story. Has there ever been a more decent, upstanding, all-American president, with his dog and his family and his Apollo Theatre song solos, treated more shamefully by his opponents? I'd be more horrified by the abuse if I wasn't sure it was backfiring.

I talked about the escalating attacks on Obama and the GOP's desperation on MSNBC's "The Ed Show" Monday night, and yes, I did talk about my dog: