Mitt Romney’s deal with the devil 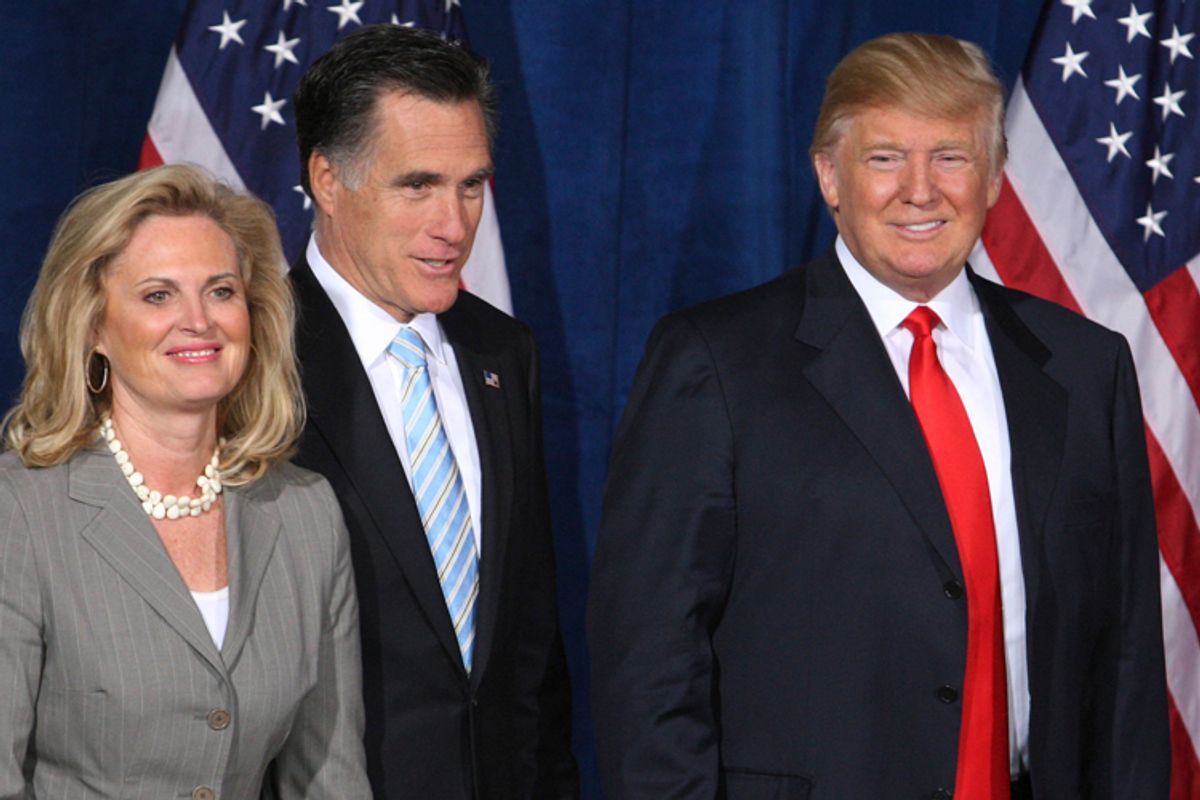 Initial reports indicated that Donald Trump would be endorsing Newt Gingrich in Las Vegas this afternoon, but most major outlets are now saying that the celebrity millionaire will instead throw his support behind Mitt Romney.

As I wrote earlier, Gingrich may be a better match for Trump when it comes to expressing seething contempt for President Obama, but Trump's public image depends on the appearance of clout, influence and general importance. This makes a Romney endorsement far more sensible; since Romney is far more likely than Gingrich to win the nomination (and in Nevada, where Trump is due to make his announcement), Trump will position himself to claim credit for pushing him over the top.

But is a Trump endorsement a good thing for Romney? That's a more complicated matter, and it gets to the basic tension between Romney's primary and general election imperatives.

From a general election standpoint, it's potentially problematic. For one thing, Trump has always been a lightning rod, but in the past year he's emerged as a particularly divisive figure, thanks to his birther crusade and degrading attacks on Obama. To the extent these antics have resonance, it's on the right; among swing voters, they're much more likely to be a turnoff. At the height of his political activity last year, Trump's unfavorable score with all voters soared to new heights, and it remains at 48 percent today -- eight points above his favorable number.

Plus, Trump's own top 1 percent image could help reinforce Romney's main vulnerability as a general election candidate. With his Bain Capital history and personal tax status dominating the news for the past month, Romney's standing has plunged with blue-collar swing voters, a constituency that will be critical to the GOP's hopes of ousting Obama. Nor has Romney helped himself with his often-clumsy efforts to inoculate himself against the charge that he's an out-of-touch plutocrat. Does he really want to be associated with a celebrity business tycoon whose catchphrase is "You're fired"? Already, Democrats are having some fun with this. "They both like firing people," DNC chairwoman Debbie Wasserman  Schultz said on MSNBC. "They both make millions doing it."

So you might think this would be a good moment for Romney to stage a Sister Souljah moment -- to dramatically refuse Trump's endorsement, bask in the resulting praise from the media, and reassure swing voters that he doesn't embody all of the excesses of Tea Party-era Republicanism. But according to ABC News, Romney's campaign has had "multiple discussions" with Trump in an effort to secure an endorsement.

From a primary season standpoint, this does make sense. Romney is likely to win the GOP nomination, but Gingrich (and Rick Santorum, for that matter) is still out there and the possibility of more embarrassing hiccups is very real. For instance, Gingrich could plausibly win a bunch of Southern states in early March, a result that would revive all of the talk about Romney's weakness as a candidate and potentially extend the GOP race through the spring and into the summer. So Romney isn't out of the woods yet, and it would be risky to make an enemy out of Trump right now. After all, Trump's anti-Obama shtick resonates with many of the same hardcore Republicans who gravitate toward Sarah Palin, Rush Limbaugh, Herman Cain and the other prominent Tea Party voices who have been helpful to Gingrich recently.

In other words, Romney may well recognize Trump's potential to hurt him with general election voters. But he wants to make sure he gets to the general election, and that means playing along

Update: And now it's official. In a somewhat bizarre scene just before 1 p.m. PST, Romney stood next to Trump and formally received his endorsement. "Mitt is tough," Trump said. "He's sharp. Governor Romney, go out and get them -- you can do it!" Romney seemed slightly uncomfortable, praising Trump for his supposed knowledge of economic issues and his anti-China rhetoric (and even calling him "Mr. Trump"), then veering into his customary talking points. "There are some things you can't imagine happening in your life," he remarked at one point. "This is one of them." What he meant by this wasn't exactly clear, but his tone suggested he didn't mean it in the "Wow, this is the greatest thing that's ever happened to me!" way. Romney didn't take questions from the press.