The increasing unwillingness of U.S. parents to vaccinate their kids makes such a pandemic all the more likely 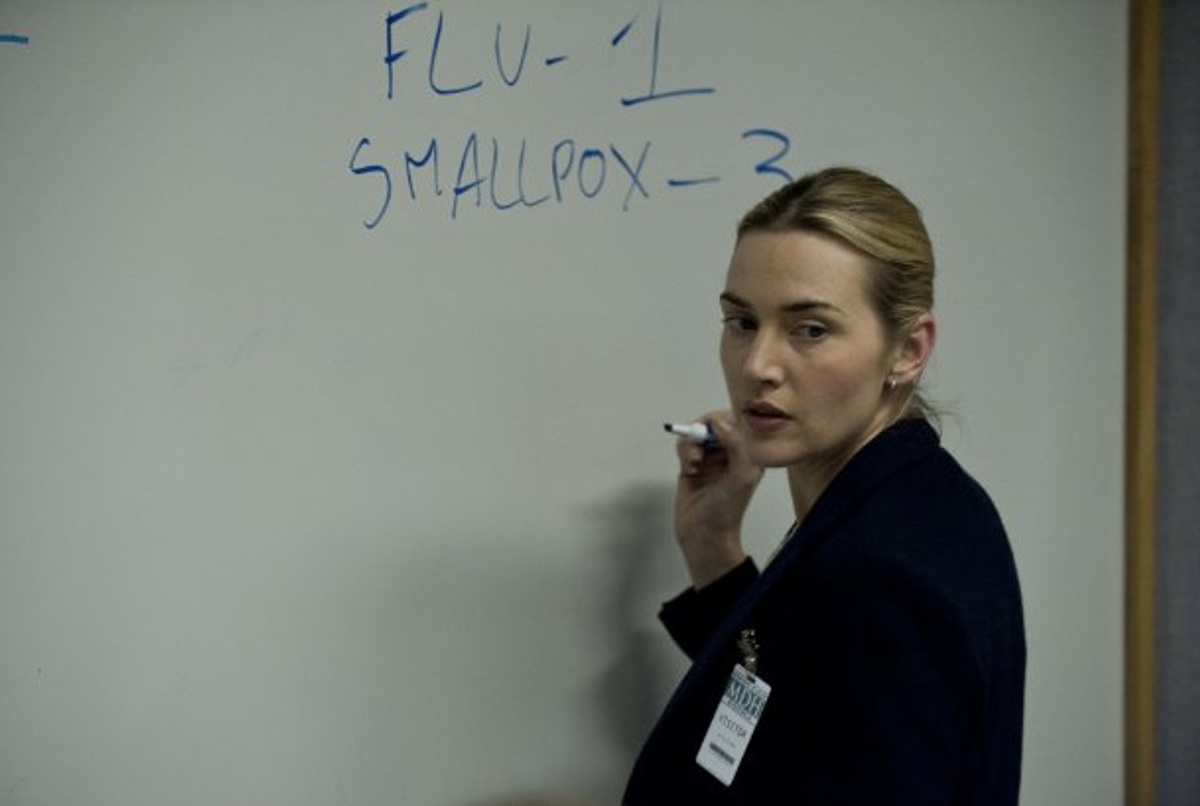 We haven’t even turned the page on the controversy over contraceptives, health care and religious freedom when another thorny one arises involving personal conscience and public health. A flurry of stories over the past few days coincided with seeing a movie that inspires more than passing interest in their subject.

Steven Soderbergh’s film "Contagion" came out a few months ago and was inexplicably and completely frozen out of the Oscar nominations. But it is the most plausible experience of a global pandemic plague you’re likely to see until the real thing strikes. With outstanding performances from an ensemble cast that includes Matt Damon, Kate Winslet, Gwyneth Paltrow and Laurence Fishburne,"Contagion" is stark, beautiful in its own terrifying way, and all-too-believable. The story tracks the swift progress of a deadly airborne virus from Hong Kong to Minneapolis and Tokyo to London — from a handful of peanuts to a credit card to the cough of a stranger on a subway. Rarely does a film issue such an inescapable invitation to think: it could happen; that could be us. What would we do?

With "Contagion" making such a powerful impression, for several days news articles seemed to keep popping up about contagious disease and the conflict between religious beliefs and immunization. There was nothing new about the basics: All 50 states require some specific vaccinations for kids, yet all of them grant exemptions for medical reasons – say, for a child with cancer. Almost all of them grant religious exemptions. And twenty states allow exemptions for personal, moral, or other beliefs.

According to the February 15 edition of The Wall Street Journal, a number of pediatricians are dropping families from their practices when the parents refuse immunization for their kids. “In a study of Connecticut pediatricians published last year,” the paper reported, “some 30 percent of 133 doctors said they had asked a family to leave their practice for vaccine refusal, and a recent survey of 909 Midwestern pediatricians found that 21 percent reported discharging families for the same reason.” They add:

By comparison, in 2001 and 2006 about 6 percent of physicians said they "routinely" stopped working with families due to parents’ continued vaccine refusal and 16 percent "sometimes" dismissed them, according to surveys conducted then by the American Academy of Pediatrics.

But some parents still fear a link between vaccinations and autism, a possibility science has largely debunked. Some parents just want to be in charge of what’s put into their children’s bodies, as one West Virginia politician puts it. And some parents just don’t trust science, period — a few have even been known to fake religion to avoid vaccinating their kids. So there are many loopholes. But now seven states are considering legislation to make it even easier for mothers and fathers to spare their children from vaccinations, especially on religious grounds.

In Oregon, according to a story by Jennifer Anderson in The Portland Tribune, the number of kindergartners with religious exemptions is up from 3.7 percent to 5.6 percent in just four years, and continuing to rise. This has public health officials clicking their calculators and keeping their eye on what’s called “herd immunity.” A certain number of any population group needs to have been vaccinated — 80 percent for most diseases, 92 percent for whooping cough – to maintain the ability of the whole population — “the herd” — to resist the spread of a disease.

Ms. Anderson offers the example of what used to be called “the German measles” – rubella. All it takes are five unvaccinated kids in a class of 25 for the herd immunity to break down, creating an opportunity for the disease to spread to younger siblings and other medically vulnerable people who can’t be vaccinated. If you were traveling to Europe between 2009 and 2011, you may remember warnings about the huge outbreak of measles there, brought on by a failure “to vaccinate susceptible populations.”

Here in the United States, several recent outbreaks of measles have been traced to pockets of unvaccinated children in states that allow personal belief exemptions. The Reuters news service recently reported 13 confirmed cases of measles in central Indiana. Two of them were people who showed up to party two days before the Super Bowl in Indianapolis. Patriots and Giants fans back east were alerted. So far, no news is good news.

But this is serious business, made more so by complacency. Older generations remember when measles killed up to 500 people a year before we started vaccinating against them in 1963. The great flu pandemic of 1918 killed ten times more Americans than died in the Great World War that ended that year and took the lives of as many as forty million globally. Our generation was also stalked by small pox, polio, and whooping cough before there were vaccinations.

In a country where few remember those diseases, it’s easy to think, “What’s to worry?” But as the movie "Contagion" so forcefully and hauntingly reminds us, the earth is now flat. Seven billion people live on it, and our human herd moves on a conveyer belt of perpetual mobility, so that a virus can travel as swiftly as a voice from one cell phone to another.

When and if a contagion strikes, we can’t count on divine intervention to spare us. That’s when you want a darn good scientist in a research lab. We’ll need all the help we can get from knowledge and her offspring.