Can Occupy pull off a general strike? 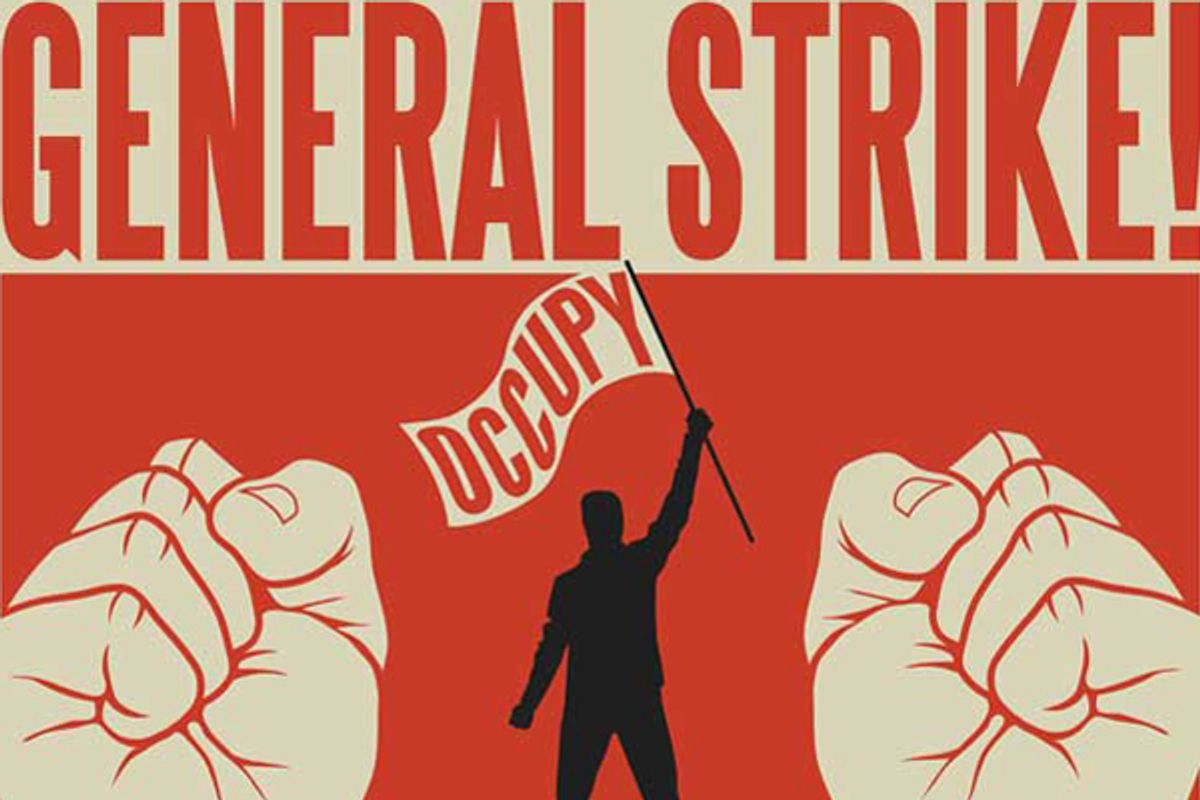 A detail from an Occupy Oakland poster calling for a November 2011 general strike. (occupyoakland.org)
--

For some months now, the allure of the general strike has quietly persisted in the Occupy movement.  In recent weeks, calls for a nationwide general strike on May 1 have grown louder; more than two months in advance of the date, a deluge of propaganda --  posters, banner drops and short online videos – portends a May Day that promises to up the Occupy ante.

The Arab Spring was galvanized by general strikes in Tunisia and Egypt, while in Greece general strikes regularly rupture business-as-usual and bring thousands onto the streets. In headier conceptions, the general strike – a withdrawal from and an attack on capitalism – is the most radical act of defiance available. Little wonder, then, that a general strike was attempted in Oakland, Calif., on Nov. 2. The call for a nationwide general strike, originated in Occupy Los Angeles, has gleaned support from Occupy groups around the United States, with the help of a Twitter hashtag (#M1GS) and a Facebook event that  has more than 12,000 promised attendees.

For a movement seeking new directions and escalations, the general strike is historically resonant and attractively bold. But can it work in the United States? And, if so, how?

As with most things Occupy, it’s unclear. Many different notions about a general strike and organizing for May Day are developing through autonomous working groups and alliances that are building between labor organizers and immigrant rights groups. It was, after all, a mass boycott against U.S. businesses by immigrant workers (both legal and illegal) on May 1, 2006 -- dubbed “A day without an immigrant” -- that revitalized May Day in the United States. Indeed, the specific language agreed to in the Occupy New York general assembly to endorse a general strike nods to this immigrant justice work. It reads:

“May Day 2012 : Occupy Wall Street stands in solidarity with the calls for a day without the 99 percent, a general strike and more!! On May Day, wherever you are, we are calling for: No Work, No School, No Housework, No Shopping, No Banking. Take the Streets!”

The sentences were painstakingly crafted over weeks of meetings by an OWS general strike planning group composed of contentious bedfellows including traditional labor activists, insurrectionary anarchists, immigrant justice workers and every permutation and cross-over in between. Disagreement raged about whether the language of general strike would alienate or put at risk unionized and immigrant workers (another reason for the inclusion of “a day without the 99 percent”). Make no mistake: Calling for a general strike in the United States carries profound risks.

“A general strike is no trivial matter," labor historian Leon Fink from the University of Illinois at Chicago told me. "It takes coordination that is open to face considerable legal and political resistance. They don’t happen very often.”

Indeed, the last full-on general strike in this country took place 65 years ago, in 1946, when 100,000 workers from 142 unions in Oakland's Alameda County took part in a “work holiday” in solidarity with striking retail clerks whose picket lines had been broken through by riot police with tear gas (at the bidding of the strikers’ managers). There were a total of six general strikes in the country that year.

The dream of repeating 1946 is constrained by –- among a multitude of factors --  legal barriers erected in the years since. The 1947 Taft-Hartley Act prohibits unions from calling strikes in solidarity with other workers. It also prohibits wildcat and political strikes. Since Taft-Hartley, organized labor has, on the whole, been on the back foot. As Robyn D. G. Kelley, professor of American History at UCLA, noted, even the most militant recent labor struggles are “simply fighting to save collective bargaining and union recognition.”

“The idea of general strike has been off the agenda of the official labor movement for decades,” said Fred Glass, California labor historian and communications director of the California Federation of Teachers.

Glass noted that in recent years, however, organized labor has shown some renewed militancy, as was evidenced by the mass protests and occupations in Wisconsin last year in defense of collective bargaining rights, or the resistance enacted by members of the International Longshore and Warehouse Union Local 21, who blocked grain trains, dumped grain and tore down fencing at the Port of Longview, Wash. Writing in Salon this week, Josh Eidelson notes that support from the Occupy movement, combined with the union’s defiance of labor laws, helped gain the ILWU a contract victory with employer EGT this month.

But increased interest in direct action is a far cry from a general strike, which is formally defined as a mass strike in all trades, sectors and industries in all parts of a city, state or country. The call for general strike on Nov. 2 in Oakland, for example, led to a port shutdown and late-night standoffs in the streets between police and protesters; it was a galvanized and militant day of action, but it did not, in fact, lead to a general strike.

Yet, the Occupy movement’s ability to defy expectations and undo assumptions should not be underestimated. This includes the subversion and reclaiming of terminology. After all, the very word “occupy” has come to signify a plethora of actions, interactions, groupings and sentiments, many of which are divorced from any traditional notion of a political occupation. Likewise, a brazen call for a nationwide general strike forces organizing groups and individuals to think about what striking could mean for them come May 1. The idea of a general strike, traditionally considered, assumes an outdated economy where essential industries can coordinate and bring a city or country’s economy to halt; it needs refiguring for the current context.

The reality is that global capitalism today is harder to disrupt. As UCLA’s Kelley put it:

“When transit workers or postal workers or taxi drivers or sanitation workers go out on strike, it can cause havoc. In the old days, when the U.S. was a manufacturing economy, shutting down plants could also cause havoc, but now we have an economy rooted strongly in service sector and financialization. If services are non-essential, it is hard to cause that kind of havoc. If the idea is to get as many people into the streets by walking off their jobs, that could be effective, but it just isn’t possible to effectively shut down or slow the economy, unless they can succeed in both mobilizing a huge minority if not a majority of people, and can succeed in building cross-border, international solidarity to stop production in countries where so-called U.S. firms have fled.”

What it might be for an unemployed person or precarious worker to strike on May 1 is up for grabs. Plans for the marches, rallies, disruption and general insubordination are still in their early stages. Arguments about march routes, permits, interaction with police, tactics and aims promise to push occupiers to their wits’ end. There is, however, a shared desire underpinning this ambitious call to action – even among those who resist the language of general strike – to disrupt business as usual and for May Day 2012 to escalate a fiercer wave of dissent against our current socio-politico-economic context.

Among the slogans resonating around the May Day calls is the pithy reminder that “strike is a verb, not a noun.” The call to general strike, then, is best understood at this point as a brash and ambitious call to action. Writing in the early 20th century, French theorist Georges Sorel argued that a real general strike could only function as a myth and that the myth was all important – the idea of something unattainable, mysterious and indescribable that can drive and inspire revolution. By Sorel’s lights, there can be no successful general strike on May 1, there has never been a successful general strike and never could be one – and that is why it’s all important to call for general strike to invigorate action.