"Island of Vice": Teddy Roosevelt vs. booze and sex in old New York 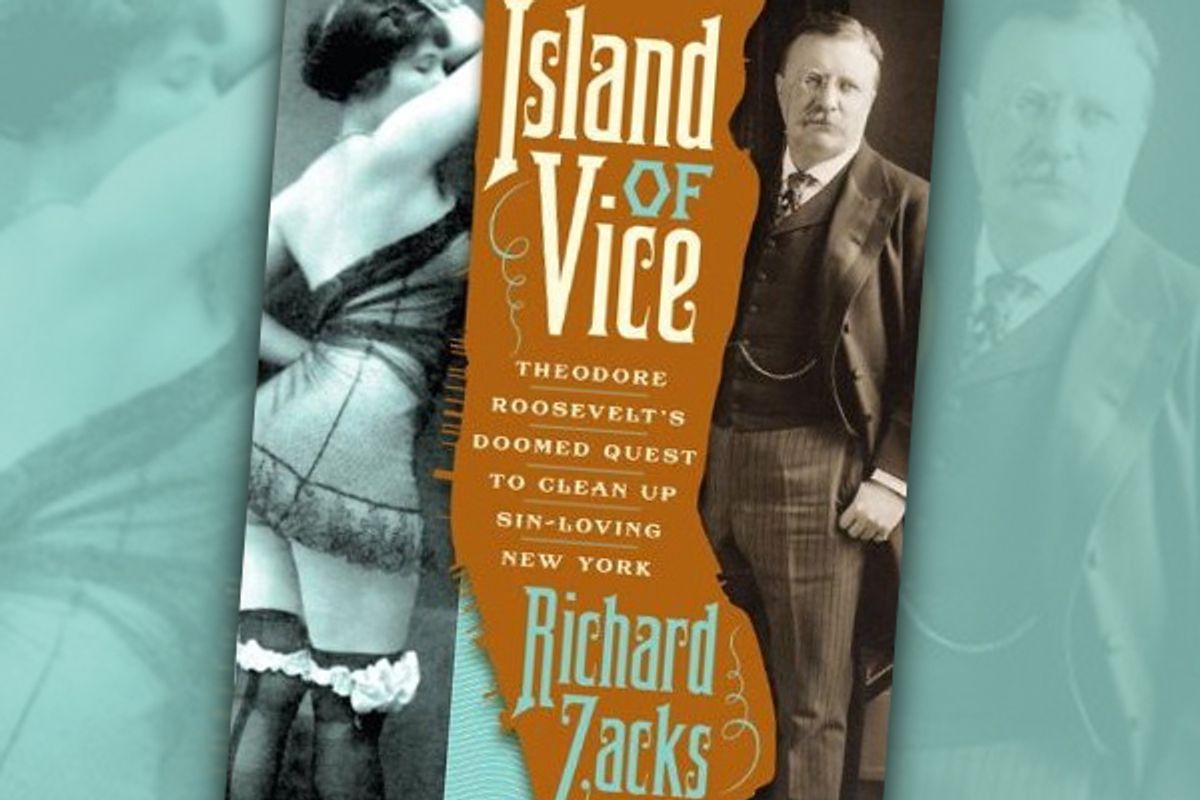 "Sing, heavenly muse, the sad dejection of our poor policemen," read the Homeric opener to a story on the front page of the New York World in 1895. "We have a real Police Commissioner. His name is Theodore Roosevelt. His teeth are big and white; his eyes are small and piercing ... his heart is full of reform." Roosevelt, a few years ahead of his entrance into national politics, had his work cut out for him. New York was, as author Richard Zacks puts it in "Island of Vice: Theodore Roosevelt's Doomed Quest to Clean Up Sin-Loving New York," the "vice capital of the United States," with 8,000 saloons and over 30,000 prostitutes.

"Island of Vice" is Zacks' account of Roosevelt's tenure on New York's police commission during the mid-1890s. As such, it faces a dilemma. The hero of the story is, obviously, TR, that quintessential American, with his boundless energy and can-do spirit, his faith in traditional values and the moral use of violence, his omnivorous mind, his machismo and his naivete. The antagonist is sin-loving New York, Roosevelt's hometown but above all the decadent and narcissistic big city that salt-of-the-earth Americans love to hate. Yet the book's main attraction isn't the glimpse it offers of a larval president or the chance to revel in rural/suburban rectitude. Anyone who settles in with "Island of Vice" will be reading it for the vice.

Few subjects are more amusing than tales of mischief and malfeasance executed by colorful characters with the antique flamboyance of an earlier era. Zacks, who knows this, extravagantly butters his book with figures like the brawling tavern-keeper Mike Callahan, who demonstrated his commitment to 24/7 service by tossing the keys to his establishment's front door into the East River. (He would not need them again for 25 years.) It's delightful to learn that the current site of the NYU campus was once a neighborhood known as Frenchtown, notorious for importing European filles de joie willing to engage in oral sex -- a service that, by all reports, few of their American colleagues offered. Or that a "tight house" on Bayard Street featured women who wore formfitting bodystockings and danced with soldiers. (A private show without the tights was referred to as a "dance of nature.")

Roosevelt, a Republican, came into office on a wave of political discontent with the once-supreme Democratic Party machine known as Tammany Hall. Police corruption scandals and a very energetic Presbyterian minister named Charles H. Parkhurst had rubbed the city's nose in its own cesspit. Parkhurst formed a society of moral crusaders, including a team of detectives who took the reverend on a tour of New York's fleshpots, everything from opium dens to dirt-floored "stale beer" joints (serving dregs collected from other bars) to a whorehouse where the reverend and an oversensitive congregant watched naked women play a game of leapfrog. Then they moved on to Frenchtown, where they witnessed some girl-on-girl action that Parkhurst declared "the most brutal, most horrible exhibition that I ever saw in my life."

Although Parkhurst's nocturnal research raised an eyebrow or two, like all such reformers he needed proof of New Yorkers' easy access to vice in order to refute police claims that they had such crimes under control. In a way, they did. The police chose to let assorted rascals flourish unchecked not because they took a worldly view toward "victimless" crimes, but because they were extracting payoffs to look the other way. From shoeshine boys who "owned" certain street corners to shopkeepers whose sidewalk displays violated city ordinances, New York presented a (literal) wealth of shakedown opportunities for the boys in blue. Catching thieves and murderers was more of a sideline.

This nasty state of affairs was the result of the pervasive cronyism and political patronage of Tammany Hall. Roosevelt, appointed with three other commissioners by a rich and idiosyncratically independent mayor, had the job of cleaning it up. Initially popular, he went on legendary "midnight rambles" with his friend, the journalist Jacob Riis, looking for patrol officers who slept or drank on the job, hassled innocent civilians or fraternized with streetwalkers. When it came to slapping down bullying or negligent officers, the public stood behind TR.

That's not to say Roosevelt didn't meet with considerable resistance. The figure Zacks offers up as his antithesis is William "Big Bill" Devery. Devery was a thoroughly crooked yet strangely endearing precinct captain who, as the New York Times noted in his obituary, "was always on trial for something or other and always being acquitted" -- the latter due entirely to his political connections. Devery, a product of Hell's Kitchen, epitomized the kind of cop Roosevelt wanted to see ejected from the force. The force and its various allies fought back every step of the way.

Roosevelt also feuded bitterly, and self-destructively, with his fellow commissioners and other city officials. He angered the leaders of his own party's machine by alienating sizable portions of New York's population. This he achieved by deciding to strictly enforce "excise" laws preventing bars from serving alcohol on Sundays. Previously, the law had seemed to exist solely for the financial benefit of the police, and in truth very few citizens besides Puritans like Parkhurst really wanted to see a Sabbath-day prohibition put into effect. But Roosevelt mulishly insisted that "while the law is on the statute book it must be strictly enforced." He refused to back down, even when, among others, the entire German community (who viewed Sunday outings at the biergarten as a wholesome family activity) rose up against him and his party and helped vote Tammany Hall back into power.

Some of the most entertaining parts of "Island of Vice" describe the ingenuity of saloonkeepers in circumventing the excise laws. Because a "hotel" that also served food was entitled to sell booze on Sundays, many bars converted their second floors to "rooms" -- cubicles where drinks could be ordered -- or required that each beer be accompanied by a sandwich. It wasn't necessary that the sandwich actually be eaten and often the same dessicated specimen would be passed from customer to customer. A joke circulated about a dive where drinking had to be temporarily suspended (with much cursing) because "somebody ate the sandwich." An unanticipated side effect of these bogus "hotels" was that females of the type Roosevelt described as "semi-respectable" ended up drinking in dangerous proximity to private "rooms" where they might easily lose what remained of their virtue.

The most lustrous resource for anyone writing about Gilded Age New York are the archives of the city's multiple newspapers. Saucy, scathing and flagrantly partisan, they are irresistibly quotable, and Zacks does not resist. The Pulitzer-owned New York World was the nation's largest-circulation paper and an implacable Roosevelt critic. Insisting that "RUM RULED THE CITY" despite the police commissioner's best efforts, it told of a Sunday when "the Tenderloin [neighborhood] glistened with its brilliant evil; the eastside wallowed in beer." Complaining of the "ponderous" ankles of an actress whose performance in "Ten Minutes in the Latin Quarter; or, a Study in the Nude" had provoked a scandal, another paper demanded that "she ought not to be allowed to reappear upon the stage unless submerged in bloomers and shoulder-of-mutton sleeves." Bemoaning the "dry" Sundays of the Roosevelt regimen, yet another broadsheet wrote "New York is rapidly becoming a jay and hayseed village such as had the supreme felicity of giving birth to Dr. Parkhurst."

Roosevelt himself seldom drank and was devoted to his wife and children, but one of his flaws was an impatient inability to see how anyone else might experience life differently. He stubbornly squandered his political capital on a battle that seems entirely pointless and quixotic to contemporary eyes. His skirmishes with other officials over issues like budgetary allotments and promotion protocol are bureaucratic matters that Zacks tries, and often fails, to make interesting. The reader returns with pleasure to the Leigh Sisters and their famous "umbrella dance" and longs to hear more of the pool hall and betting parlor on Bleecker St. that catered exclusively to women.

There's grist for a few good movies between the covers of "Island of Vice," but none that would feature a Hollywood ending. Because it's hard to side with Roosevelt in this fight, the book offers more ambiguous pleasures. Between risque anecdotes and vintage dirty jokes, it provides a vigorous depiction of large-scale municipal politics in all its sticky, sweaty glory, and an ever-useful reminder that there are limits to even the most dynamic leader's ability to dictate personal morality. Sin-loving New Yorkers wouldn't have it any other way.