As the prime minister enjoys America, his good friends the Brookses are arrested back home 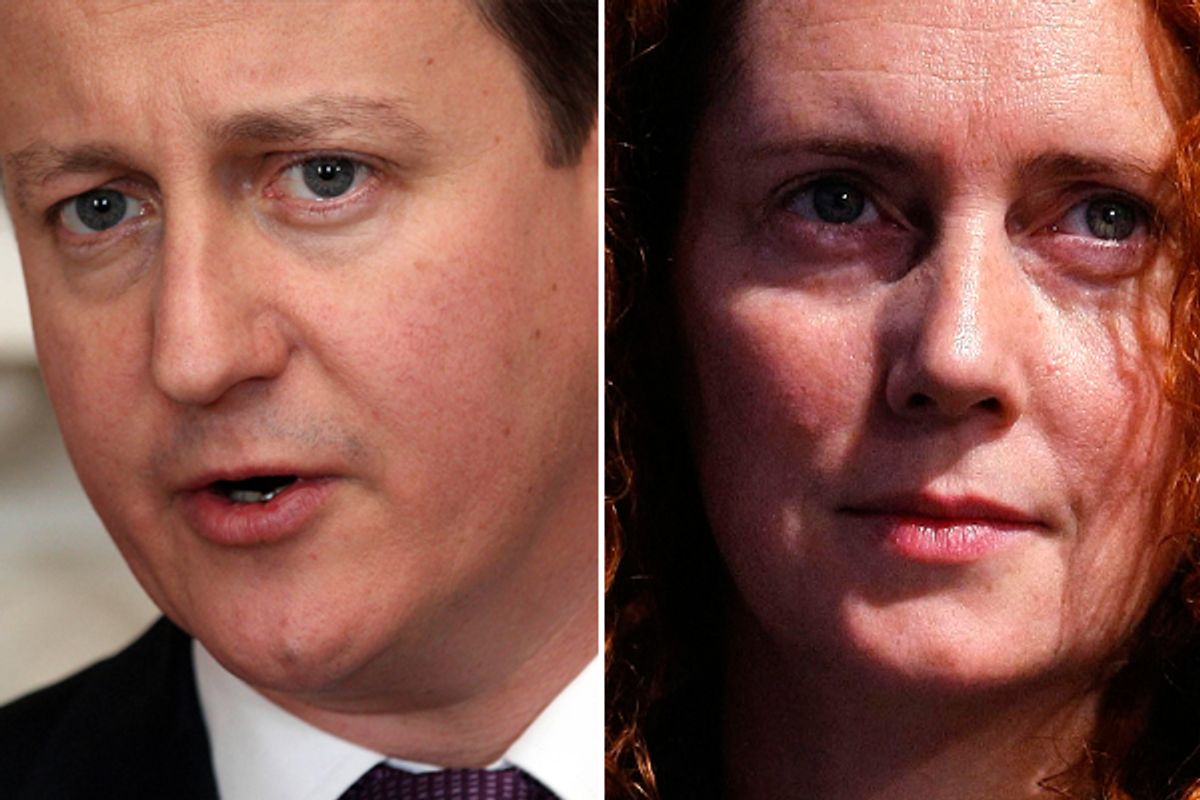 Insecure countries are known to lock up unsavory elements when international guests are expected, so it should not have been a terrible shock to see that the U.K.'s Metropolitan Police had arrested former News Corp. executive Rebekah Brooks and her horse-training husband, Charlie, yesterday, a few short months before the opening ceremonies of the London Olympic Games. The Brookses are now, apparently, back on the streets, having made bail.

The Brookses were arrested, along with four others, "on suspicion of conspiracy to pervert the course of justice." This was the second time Rebekah Brooks, the former editor of the Sun and the now-shuttered News of the World, had been arrested -- the last time it was for conspiring to intercept communications, or "phone hacking" -- and this arrest suggests that News International's extensive efforts to cover up their unethical practices may end up damaging the company just as much as the unethical practices did.

Brooks' newspapers gathered a great deal of news by illicitly listening to the voice-mail messages of celebrities and members of the royal family and murder victims. They also had a private investigator on contract to do other law-violating things, and they had a bribery budget that would make most American newspaper publishers jealous. Once Murdoch's British newspaper empire faced civil, criminal and Parliamentary inquiries, they went on an email-destroying binge. They have since become much more cooperative, but deleting half a terabyte worth of emails to and from executives and destroying computers used by journalists under investigation is really not a sound legal strategy.

James Murdoch, still the News Corp. heir apparent, has written a note of apology to members of Parliament. He owes them an apology because the recoverable emails among the deleted cache strongly indicate that he lied to Parliament about his awareness of the extent of phone hacking. James has also essentially fled the country, having resigned from his father's British newspapers company and taken a job at his American-based international pay television company.

Meanwhile, British Prime Minister David Cameron is in the middle of his well-publicized state visit to the United States. Barack Obama has taken him to a "basketball match," which Cameron found "hard to follow." The right-leaning U.K. papers have been extremely overexcited in their coverage of the PM's visit, because, again, national insecurity.

Speaking of horses, Charlie Brooks has one running in a race today. As the Guardian noted, he had a column published the day he was arrested in which he said, tragically, that "the happiest moment of my year is about three hours before the first race at Cheltenham on Tuesday."

As for old Rupert himself, he hasn't tweeted anything since Saturday. But he assured employees at the Sun that they're in the clear, and he's headed to London to perform damage control. His British newspapers hold a special place in his heart, making it a bit poignant -- or hilarious, depending on your perspective -- that that tiny arm of his vast international empire is the one that is currently destroying everything he's spent a lifetime building.