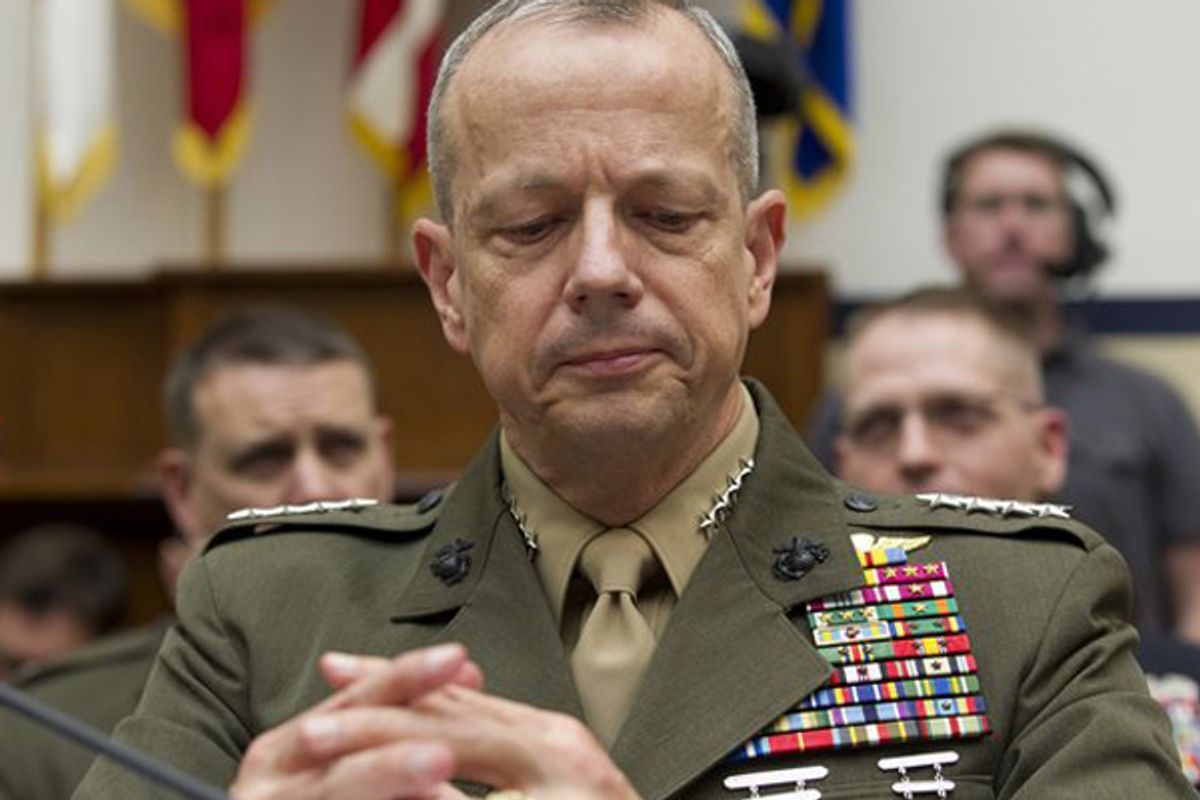 After an Afghan soldier killed two British troops in Kabul on Monday, Gen. John Allen, chief of the international forces in Afghanistan, told reporters in Washington it was the 40th such attack in recent years. "An erosion of trust has emerged," he conceded.

Such tactful understatement was the order of the day as Allen tried to put the best face on President Obama's floundering war policy. Fielding friendly questions at the Brookings Institution from Michael O'Hanlon, a war supporter, Allen gave an assessment of the war that was positive in general but downbeat to the point of discouraging in many of its specifics.

The contrast is the norm in Washington as the Obama administration continues to wage an unpopular war with the support of an acquiescent Congress and sympathetic analysts like O'Hanlon. Allen general faced only gentle questioning on Capitol Hill last week despite the fact that 50 percent of Americans polls say the U.S should speed up its troop withdrawals, twice as many as say the U.S. should stick with Obama's plan to leave by 2014.

The general's candor sometimes belied his spin. While the Taliban has tried hard to infiltrate the Afghan forces, Allen said the insurgents accounted for less than 50 percent of "green on blue" attacks that have claimed the lives of 15 allied soldiers in the last three months.  A majority of the attacks, he went on, have been perpetrated by Afghans whom he described as  "self –radicalized." He cited the influence of the viral video of U.S. soldiers urinating on dead Afghans, the burning of the Koran at a U.S. base, and "the recent events in Panjwai," a delicate reference to the killing of 17 people by a U.S. army sergeant last week. In other words, the actions of the U.S. military are more effective than Taliban ideology in inspiring Afghans to kill Americans. This was less than reassuring.

So was Allen's heavily qualified claim that after a decade the Afghan people accept the U.S. military presence. "I think there is hope that the population is on the right trajectory to accept the security forces," he said carefully.

To his credit, Allen did not scant on facts that offered less hope than his rhetoric suggested. Taliban attacks are down in the north and the western part of the country, he claimed while admitting attacks have increased in the east where the "insurgency continues to boil." He predicted that in coming months the Taliban would "increase the tempo of suicide attacks and assassinations."

The U.S. effort to replace has incompetent or corrupt military commanders, he said, has been stymied by the Afghans themselves. "We have pointed out a number of individuals," he explained. "The results have been mixed. Some of them have been removed quickly. Some have been moved to units elsewhere and resurfaced."

Allen concluded by saying U.S.-Afghan relations are "strong" and he praised Afghan soldiers as "some of the greatest  fighters you'll ever meet," but he added pointedly "the ferocity of the individual is less important than planning."

Not even O'Hanlon's effusive commentary--"You sketched that beautifully," he told Allen at on point—could dispel the impression of a mission that can't be completed on U.S. terms. When the general finished speaking, O'Hanlon said. "You're presentation was riveting." It was, but not in a good way.