Schools for the corporate era 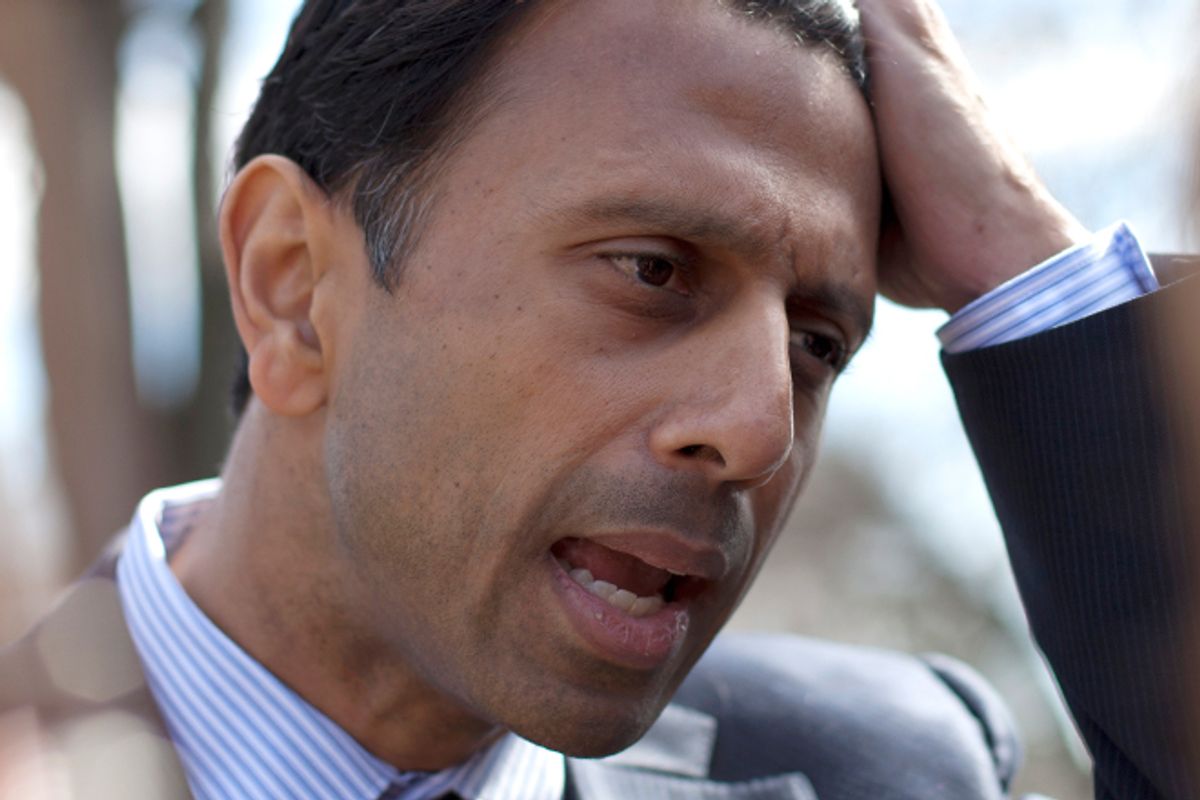 This piece originally appeared on Colorlines.com.

Gov. Bobby Jindal has remade the Louisiana public schools system with impressive speed over the past legislative session. Last week, he signed into law a suite of landmark reform bills that will likely change the direction of public education in Louisiana forever. But not all change is good, and critics say both Jindal’s agenda and the strategy to move it come right from the playbook of conservative advocacy group ALEC, in an effort to revive Jindal’s national political profile.

Louisiana is now home to the nation’s most expansive school voucher program. Charter school authorization powers have been broadened. And teacher tenure policies have been radically transformed. Louisiana already had something of a reputation as a radical-reform state, thanks to the post-Katrina educational climate in New Orleans. But not all change is good, and education advocates have deep concerns about the efficacy of Jindal’s overhaul, and the interests that have pushed it.

“With these laws Gov. Bobby Jindal has sold our kids out for his political aspirations,” said Karran Royal Harper, a Louisiana parent activist and education advocate.

The bills all sprinted through the state legislature. Committee hearings were conducted at a breakneck speed, Democratic lawmakers complained, and members were asked to vote on amendments they didn’t actually understand. When the House took up a bill changing teacher-tenure rules, it ran the session past midnight, refusing to break until they called for a vote.

“There’s just so much more here than what our group can handle,” said Minh Nguyen, executive director of the Vietnamese American Young Leaders Association of New Orleans, a community advocacy group. “We don’t even have the capacity to handle all the bills that are being proposed right now and it’s been really challenging to us.”

ALEC’s 2010 “Report Card on American Education” (PDF) suggested that lawmakers overwhelm their opposition in exactly this manner. “Do not simply just introduce one reform in the legislature—build a consensus for reform and introduce a lot,” the report authors told ALEC members.

“Across the country for the past two decades, education reform efforts have popped up in legislatures at different times in different places,” the report authors wrote. “As a result, teachers’ unions have been playing something akin to ‘whack-a- mole’—you know the game—striking down as many education reform efforts as possible. Many times, the unions successfully ‘whack’ the ‘mole,’ i.e., the reform legislation. Sometimes, however, they miss. If all the moles pop up at once, there is no way the person with the mallet can get them all. Introduce comprehensive reform packages.”

One new law Jindal moved in this fashion will make Louisiana among the most aggressive states in the nation for pushing charter schools and publicly funded vouchers for private institutions. It also includes a “parent trigger” provision, where parents whose children are enrolled in a failing school can hand the school over to Louisiana’s Recovery School District if a majority choose to do so. However, the key provision expands New Orleans’ current pilot voucher program so that now, students from high-poverty families enrolled in schools that have been rated a C, D or F by the state may move to a private school at the state’s expense.

More than half of Louisiana’s student population, or around 385,000 students, are expected to qualify for the voucher program, according to Tulane University’s Cowen Institute. Only 4,000 vouchers will be available in the first year, experts estimate, but the law makes Louisiana’s program the most expansive in the nation.

Jindal’s set of reforms hews closely to the model reform legislation set out by ALEC, which advocates for the privatization of traditionally public services, like health care, prisons and education. ALEC and Jindal’s school agenda is driven by a conservative ideology that believes private markets can help introduce efficiency and healthy competition into public institutions. As ALEC’s education report card in 2010 laid out, “Families need a market for K-12 schools. The market mechanism rewards success, and either improves or eliminates failure.”

ALEC and Jindal have kept close ties for some time now, education watchers in the state say.

“This is really ALEC at work. It’s a feather in Gov. Bobby Jindal’s cap—he has spent a lot of time traveling around the country lining up donor money and now he can say Louisiana is one of the few states that has a large choice environment,” said Harper, who pointed out that many of the key committee members who supported the legislation are ALEC members or have received campaign contributions from groups with ties to ALEC. Indeed, at its annual meeting last August, ALEC recognized Jindal with its coveted Thomas Jefferson Freedom Award for “outstanding public service.”

“It was a huge defeat for us,” said Damekia Morgan, the statewide educational policy and campaign director of Families and Friends of Louisiana’s Incarcerated Children.

Critics say the rushed process hampered conversation on the bills. The voucher bill in particular is still light on specifics about implementation. The state has yet to create a plan for evaluating the private schools that take public vouchers. Evaluation wasn’t even mentioned until a vague amendment that calls for “an accountability system for participating students at participating schools” to be hammered out by the state board of education by Aug. 1.

The lack of an accountability plan is telling, says Morgan. The standards that are devised don’t need to come again before the public before they are codified. “This is all supposedly about demanding accountability for public schools and here we’re handing off our students to private schools without any checks,” Harper also said.

In addition, the parent trigger provisions are also too vague, education advocates say. In California, the lack of specificity around that state’s parent trigger law led to protracted court battles when a community first made use of the law.

These sorts of bills have an undeniable appeal for parents, especially poor parents of color who’ve been locked out of decision making circles and feel like their concerns have often gone ignored by public school administrators. Yet education advocates say that these bills provide only the veneer of choice for parents, while removing parents’ avenues for demanding accountability via collective action.

The parent trigger portion of the new Louisiana laws, for instance, allows for public schools to be converted only to charter schools. The laws give parents no avenue for re-triggering a failing charter school, of which there are many. And while lawmakers hope that parents feel empowered by school vouchers, their options for where they can place their children will be limited to the private school options on the table.

“Clearly these options are not full choice for parents,” said Andre Perry, associate director of Loyola University’s New Orleans’ Institute for Quality and Equity in Education. Perry said his concern was that these reforms, while bold, don’t get to the heart of how educational inequity is created in the first place. Instead, what lawmakers are voting for, Perry said, “is a belief in a philosophy that’s being applied in the name of choice.”

“It’s a catch-22 for parents,” said Damekia Morgan, the statewide educational policy and campaign director of Families and Friends of Louisiana’s Incarcerated Children. “Parents are desperate for change. But as a parent myself, I know that the more money we take away from public education systems to go to private entities, the less control I have over what public education looks like.”

These days, the push to deregulate public education is a popular, bipartisan issue. Many of the states that have passed school reform overhauls in recent years did so to become eligible for the Obama administration’s $4.3 billion competitive grants program Race to the Top.

“Republican governors, shrewdly, jumped all over it and packed on their version of choice,” Perry said. “That’s how you see what we have now, where many different political bedfellows are coming together in a strange way.”

Indeed, Jindal spoke the language of the Obama administration last Wednesday when he touted his reform package as a way to help Louisiana children better compete in the global economy.

“[Louisiana children] are going to be competing with kids not only from Texas, Georgia, and other states, but they’re going to be competing for jobs with kids in China and other countries around the world,” Jindal said. “That is why it is so important we give every child in Louisiana a great education.” It could have been a line out of one of President Obama’s own education speeches.

This is one of the reasons why Perry says the presence of ALEC in the school reform policy arena isn’t reason enough for an outcry. Not only is ALEC not the only conservative group pushing for a free market approach to public education, but “there are pillars of each party that push the agenda.”

“The question is more about: what is so compelling about their arguments that is helping advance their agendas? Again, Jindal has been able to usher this through partly because the traditionally based system has failed in many ways. And that’s just the reality.”

Julianne Hing is a reporter and blogger for Colorines.com covering immigration, education, criminal justice, and occasionally fashion and pop culture. She tweets at @juliannehing