Your brain on white people

Neuroscience shows the media's overwhelming whiteness really is changing our minds. But we can change them back 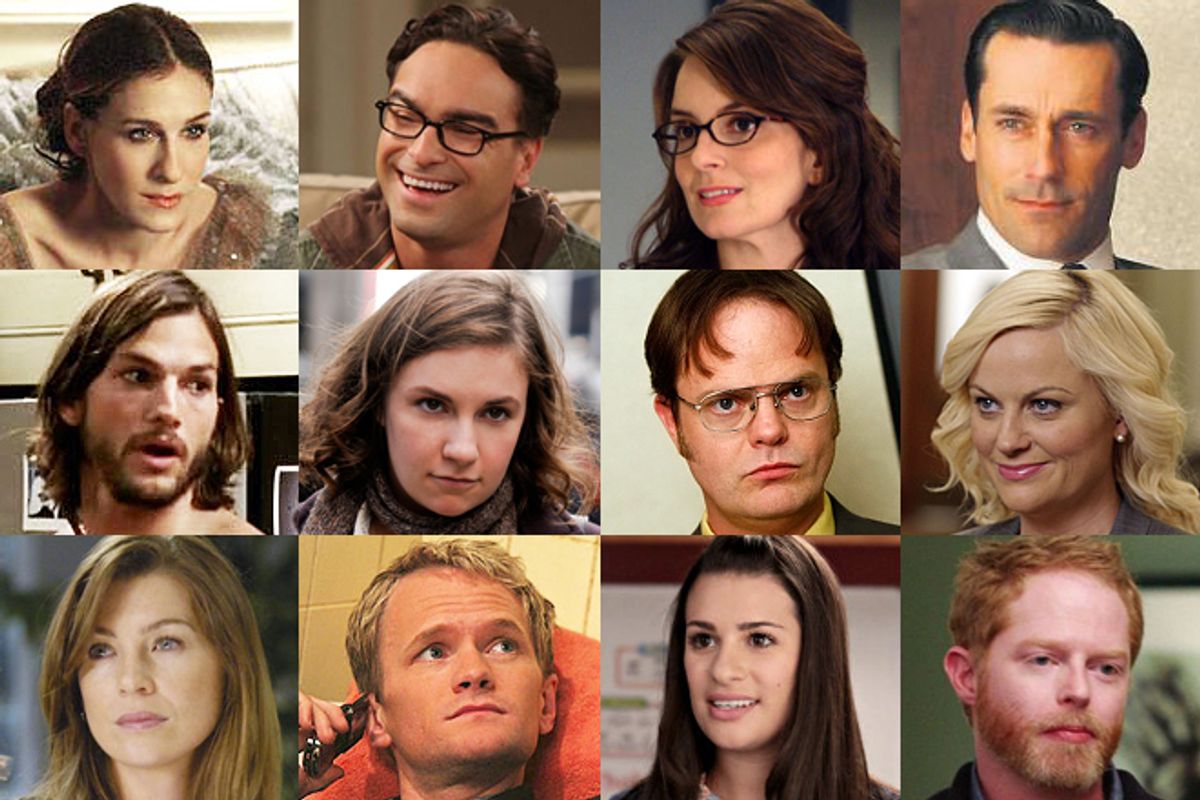 It simply isn’t true that there are no folks of color in the new HBO series "Girls," in which young, attractive white women try to find their way in the post-9/11 Big Apple. For example, in the last minute of the very first episode, a homeless black guy talks to our quirky, spunky heroine, Hannah.  “Why don’t you smile?” he says to her. “Does your heart hurt? Oh, girl, when I look at you, I just want to say Hellloooo, New York!”

Hello, New York, indeed. This isn’t the first time TV pushed millions of immigrants and people of color to the margins of one of the most diverse cities in the world. Hello, Woody Allen! Hello, "Seinfeld"! Hello, "Friends" and "Sex and the City"! If "Girls" can’t make it there, it can’t make it anywhere. Of course, the rest of TV has been overwhelmingly white, too. Ever since "Father Knows Best" and "Wagon Train," the medium has long presented a whitewashed version of the way we live.

That might be why some "Girls" writers take exception to their show being singled out for criticism. Here’s what writer Leslie Arfin tweeted in response to criticisms: "What really bothered me most about Precious was that there was no representation of ME." ("Precious," the 2009 film about a mentally and sexually abused teenager, featured a predominantly black cast.)

Why shouldn’t Arfin and creator Lena Durham be able to re-create their own private girl-world on screen? What responsibility do show runners have to represent diversity? Does it even matter? How do our brains respond when people of color are invisible or stereotyped on TV?

This is where science can help. I co-edited a book called "Are We Born Racist?," which features new insights from psychology and neuroscience about what happens in our nervous systems when we encounter people of different races. And we found that decades of studies say yes, the racial vision of "Girls" does matter. For example, a series of four 2009 studies found that people who watched shows that featured negative nonverbal behavior toward blacks became more prejudiced themselves, as measured by tests of implicit bias — this was especially true when viewers didn’t recognize the behavior as negative. It seems that TV can indeed subconsciously induce racism.

So how can show runners correct for that? The research is overwhelmingly clear: job one is to confront the fact that racial difference exists. The new science of racism reveals that our brains do indeed seem to react negatively to people of different races — exposure of just milliseconds to a black face can cause white folks’ amygdalae to light up with fear.

Colorblindness doesn’t work because we never stop spotting differences in our environment.  Our brains are designed to do that; that’s how we survived on the savannah 50,000 years ago, and it’s how we survive in the globalized urban jungles of the 21st century. It takes an effort of will to cover your eyes and stick your fingers in your ears and shout, “Nah nah nah I’m not listening,” when confronted with racial difference. And doing that is what psychologists call “non-survival behavior,” something that belongs in the same category as smoking cigarettes and riding a motorcycle without a helmet.

The antidote to subconscious bias is not political correctness — shoehorning in a quirky, spunky black BFF for the girls will just annoy black viewers, instead of making the world a better place. Rather, the best cure for what ails shows like "Girls" is a dose of thoughtfulness, self-awareness and courageous originality.

The good news is that our brains get used to difference; in most situations, exposure to people of different races reduces prejudice. That’s a good reason for TV and movies to at least make an effort to show our cities in all their diversity. But that’s not all. As researchers have developed new and creative ways to induce racial nightmares in brain scanners, they’ve found that the prefrontal cortex — that’s the newest, most human part of the brain, the one responsible for long-term planning and intentional thought — is able to tell the oldest, least human part of the brain, the amygdala, to calm down. In other words, people can outthink and unlearn subconscious prejudice.

Some folks seem to think, as my colleague, UC Berkeley psychologist Rodolfo Mendoza-Denton writes, that “unconscious biases reveal ‘the real you’ — how you really feel about X or Y group despite your best, superficial efforts to hide it.” Some interpret this idea to mean that saying whatever ugly thing enters our heads is simply being honest. We don’t want to suppress our true savage nature, do we? We don’t want to sweep it under the rug, do we?

No, we don’t. And we should also be honest about how racially homogenous our social networks tend to be — if the quirky, spunky frenemies in "Girls" are all white, that’s just realistic, I agree. But shows like "Girls" improve when they implicitly and explicitly recognize that there are people in the world who aren’t like the protagonists, and that sometimes we all say stupid things.  So instead of being defensive, as Arfin was in her tweet, what if we just took knee-jerk bias for granted — and then also took it for granted that people can grow and correct for prejudice? What if we just, you know… had faith in each other?

“The assumption that prejudice and egalitarianism is an all-or-none proposition (i.e., one is either prejudiced, or one is egalitarian) makes the possibility that one may think or do something stereotypical very threatening, precisely because it would reveal one's true nature,” Mendoza-Denton argues. But when we consciously condemn racism, that act of the prefrontal cortex is just as authentic and meaningful as the unconscious impulses we find in the amygdala. In fact, I’d argue that intentionally rejecting racism reveals the very essence of our humanity.

The trick is, quite simply, to acknowledge race and racism, and to talk about it. Many white parents avoid the subject like the plague — in one notorious instance, parents pulled out children en masse from a study when they learned it would entail talking about race. But this strategy doesn’t produce colorblind citizens. It creates shows like "Girls," "Seinfeld" and "Sex in the City." It perpetuates a society that historically has pretended to be entirely Anglo-Saxon.

In fact, many, many studies find that children whose parents talk with them about race ultimately become less prejudiced. Talking is how we become conscious of subconscious biases — bias against anyone or anything, not just people of different races. All this science stuff sounds high-minded and earnest, doesn’t it? Is it even possible to apply these insights to a TV show without wrecking its entertainment value? Is it possible to depict racially insular and casually prejudiced white people in a way that doesn’t promote insularity and prejudice, as "Girls" does?

"Mad Men" does it (for gender as well as race). The non-quirky, non-spunky main characters are all white, but race haunts the show, in ways that are mostly lost on the chain-smoking ad executives it depicts. The difference between "Mad Men" and "Girls" is simply that "Mad Men" sees its characters with a combination of compassionate objectivity and ruthless historical perspective. That’s the result of artistic integrity, not political correctness.

Take this video, for example. It’s easy to chuckle at the character, Pete Campbell. But as you watch this clip, think about the nuances involved in this interaction — the ways Pete and Hollis struggle to communicate across profound differences in social power.

And by the way, HBO has done it before. "The Sopranos" was a show about Italian-American mobsters who must, as with any modern line of employment, work with people different from themselves. In this scene, we see the crew discussing some workplace diversity issues, wiseguy-style.

It’s raw, racist and honest. But it’s more than that. The writing is also smart, self-aware and grounded in the real world. This kind of writing does not see moral seriousness and entertainment as a trade-off, an either-or. It’s a both-and.

"Girls" is actually a pretty good show; it made me laugh, it made me sigh. But the bloggers are right to ask for it to be smarter and better. It’s something we should always be asking of ourselves.

Jeremy Adam Smith is Web Editor at the UC Berkeley Greater Good Science Center and the author or coeditor of four books, most recently "Are We Born Racist?" and "Rad Dad: Dispatches from the Frontiers of Fatherhood."