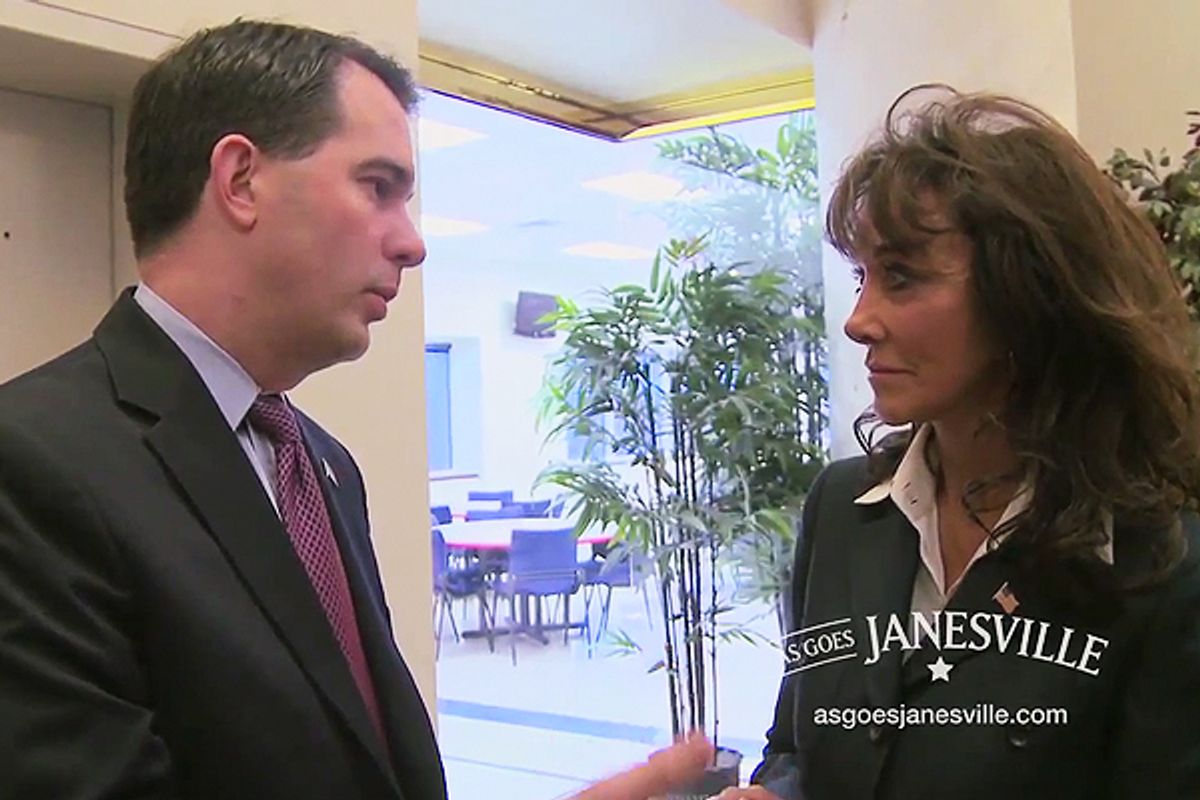 Scott Walker’s hopes of surviving Wisconsin’s June 5 recall election in part depend on his ability to convince voters that he’s only worried about a very particular type of union – and only because of fiscal issues, not philosophical ones. Democrats’ hopes of ousting him depend in part on convincing voters this isn’t true, and that their governor is waging an ideological war on all unions.

This is why a newly-released video could be very significant. The video, which was shot by a pro-Tom Barrett filmmaker who is working on a documentary, shows Walker in January 2011 talking with Diana Hendricks, the billionaire owner of a roofing company. She asks him if there’s any chance he’ll be able to make Wisconsin a right-to-work state. Walker tells her that “we're going to start in a couple weeks with our budget adjustment bill. The first step is we're going to deal with collective bargaining for all public employee unions, because you use divide and conquer."

Those last three words are the key. The bill to strip public employees of their right to bargain collectively was introduced a few weeks after Walker’s chat with Hendricks, prompting protests of an unprecedented scale in Madison and giving rise to the recall effort. Walker has long argued that he was responding to a budgetary emergency, and that unduly generous contracts won by public sector unions were a big reason for it. His desire, the line goes, was merely to correct a flawed system that encouraged elected officials to commit huge sums of taxpayer money to public employees, for fear of incurring their wrath in elections.

What Walker swears he wasn’t – and isn’t – interested in doing is taking power away from private sector unions. There’s a very practical reason for this. In Wisconsin, an unusually large segment of the electorate – 26 percent, in the most recent statewide election -- is composed of voters from union households. (Nationally, the figure is 17 percent.) And the union tradition is ingrained in the state’s history. So Walker, in his public comments, routinely distinguishes between the two types of unions. “Private sector unions,” he said recently, “have been our partner in the economic revival we’ve had in this state. A bigger issue is the impact the public-sector unions have had on the taxpayers."

Union leaders and their Democratic allies have been pleading with voters to see this as a ruse, a way for Walker to divide the union movement by pitting public employees against private sector workers. Which makes the new video so powerful. Here is the governor conversing with a billionaire (who later gave $500,000 to his campaign) and telling her all about his “divide and conquer” strategy against union power. Granted, it’s not clear if Walker is actually laying out a road map to make Wisconsin a right-to-work state (a complete transcript of the exchange isn’t much help), but the video basically conveys everything that Democrats have been trying to get voters to see about him. And its run-time is 28 seconds – ready-made for a television ad.