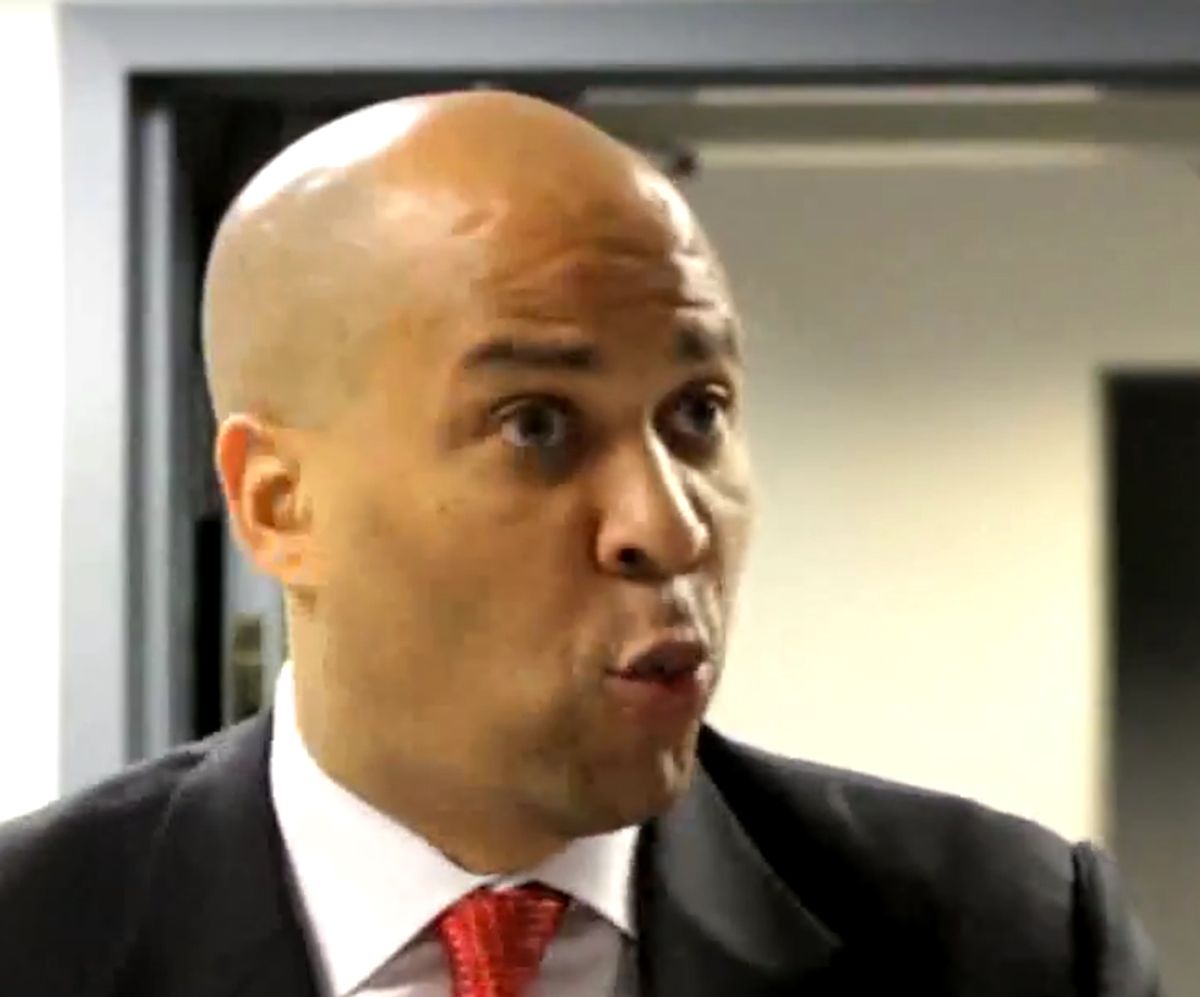 If Cory Booker went on “Meet the Press” on Sunday with the intent of helping President Obama, then his appearance was an utter failure. But anyone who’s followed the enormously ambitious Newark mayor’s career closely knows he’s not one to pull a Joe Biden. He’s just too smart and too smooth to screw up so epically.

More likely, Booker went on the show to help himself and to advance his own long-term political prospects. And on that score, his appearance was a success.

You’ve probably seen or are now seeing the headlines Booker generated by calling the Obama campaign’s attacks on Mitt Romney’s private equity background “nauseating” and likening them to efforts by some on the right to inject Rev. Jeremiah Wright into the campaign.

He added: “I have to just say from a very personal level, I’m not about to sit here and indict private equity. To me, it’s just we’re getting to a ridiculous point in America. Especially that I know I live in a state where pension funds, unions and other people invest in companies like Bain Capital. If you look at the totality of Bain Capital’s record, they’ve done a lot to support businesses, to grow businesses. And this, to me -- I’m very uncomfortable with.”

Playing up Romney’s Bain record is, of course, central to Obama’s general election plan. Romney is running as a business-savvy “job creator” and relying on the public’s tendency to associate private sector success with economic competence. There is no overstating how vital it is for Obama and his campaign to break that link, and to establish that Romney’s real expertise is in making investors rich – not adding jobs and improving the quality of life for middle class workers.

In belittling this strategy, Booker isn’t just breaking with Obama, he’s breaking with just about everyone who’s ever run against Romney – including Ted Kennedy, who used criticisms of Bain’s treatment of workers to pull away from Romney in their 1994 Senate race. Essentially, Kennedy created the blueprint that Obama is now using. Booker is also providing Republicans with a dream talking point: A top Obama surrogate not only disapproves of Obama’s use of Bain, he finds it nauseating!

It wouldn’t be surprising if Booker has already heard from the White House, and surely he’s now in for a world of abuse from Obama supporters. But that hardly means he made a mistake, at least in terms of his own ambition. Financial support from Wall Street and, more broadly speaking, the investor class has been key to Booker’s rise, and remains key to his future dreams.

It’s easy to forget, but before the world met Barack Obama in 2004, many believed that the first black president would be Booker. Armed with Stanford, Yale and Oxford degrees and all of the invaluable personal connections he forged at those institutions, he set out in the mid-1990s to craft a uniquely appealing political biography, swearing off lucrative job offers to move to Newark’s Central Ward and take up residence in public housing. Within a few years, he won a seat on the City Council, where he showed an early and consistent knack for self-generated publicity, most notably with a ten-day hunger strike in the summer of 1999.

That set the stage for Booker’s 2002 race for mayor, an ugly contest against incumbent Sharpe James, an entrenched icon of the city’s civil rights generation of black politicians. James, as any self-respecting Newark mayor would do, leveraged his clout for campaign contributions from city workers, vendors and those who aspired to be city workers and vendors.

Booker, meanwhile, had hardly lost touch with his old classmates, keeping one foot in Newark and the other in Manhattan, where he built on the connections to elite donors that he already had. He called the millions of dollars he raised for the race “love money.” The press – and James’ campaign – took note that almost all of it was from outside Newark, nearly half of it was from outside New Jersey, and a quarter of it came directly from Wall Street.

This helped bolster James’ claim that Booker, who grew up in an affluent suburb, was not an authentic Newarker. That attack resonated just enough to save James, who won in a squeaker. It was a pyrrhic victory, though: Booker had captured national interest – there was a Time profile during the campaign, and an Academy Award-nominated documentary followed – and immediately started campaigning for the next race, while a federal investigation soon swallowed up James. In 2006, Booker was elected with ease, while James was on his way to jail.

Since then, the only question in New Jersey has been when – and not if – Booker will seek to run for statewide office. In 2009, the beleaguered Jon Corzine begged him to run for lieutenant governor on his ticket, an offer that Booker wisely refused. He’s often touted as a potential gubernatorial candidate for 2013, but those who know him say his eye is more on the Senate seat now held by 88-year-old Frank Lautenberg, which will be up in 2014.

This is why it’s not at all surprising to see Booker going to bat for private equity. The allies he’s cultivated on Wall Street and in the financial industry (think, for instance, of his chummy relationship with Michael Bloomberg) have made Booker a prolific fundraiser, and when he ventured into the ultra-expensive statewide game, he'll need them more than ever. Many of them have turned fiercely against Obama over the past few years, convinced that he’s unfairly targeted them. Booker’s words on “Meet the Press” may have enraged the average Obama supporter, but to the Wall Street class they were probably close to heroic – finally, a big-name Democrat with the cojones to call out Obama on his class warfare!