How extremism is normalized 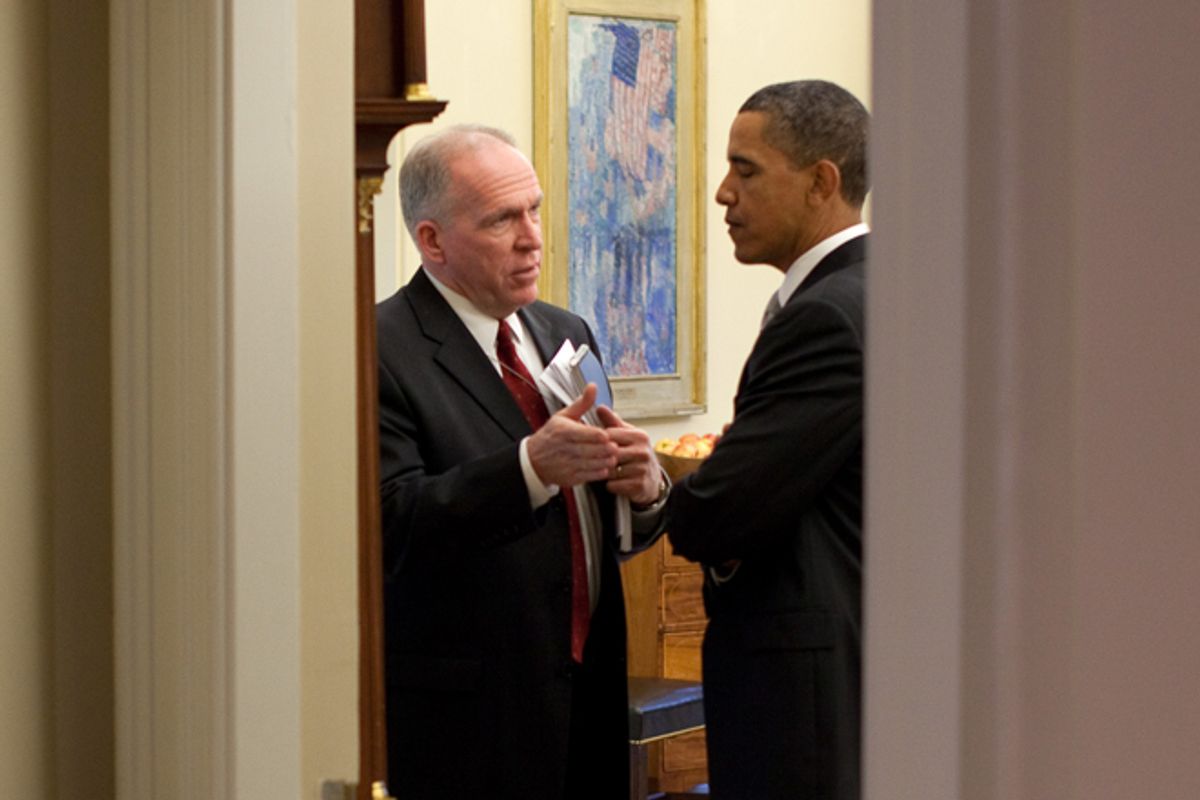 There is one important passage from yesterday's big New York Times article on President Obama's personal issuance of secret, due-process-free death sentences that I failed to highlight despite twice writing about that article. The fact that I did not even bother to highlight it among all the other passages I wrote about is itself significant, as it reflects how rapidly true extremism becomes normalized:

That record, and Mr. Awlaki’s calls for more attacks, presented Mr. Obama with an urgent question: Could he order the targeted killing of an American citizen, in a country with which the United States was not at war, in secret and without the benefit of a trial?

The Justice Department’s Office of Legal Counsel prepared a lengthy memo justifying that extraordinary step, asserting that while the Fifth Amendment’s guarantee of due process applied, it could be satisfied by internal deliberations in the executive branch.

Mr. Obama gave his approval, and Mr. Awlaki was killed in September 2011, along with a fellow propagandist, Samir Khan, an American citizen who was not on the target list but was traveling with him.

Please just re-read that bolded part. This is something that we already knew. The New York Times' Charlie Savage had previously reported that Obama OLC lawyers David Barron and Marty Lederman had authored a "secret document" that "provided the justification for acting despite an executive order banning assassinations, a federal law against murder, protections in the Bill of Rights and various strictures of the international laws of war" ("The memo concluded that what was reasonable, and the process that was due, was different for Mr. Awlaki than for an ordinary criminal"). Attorney General Eric Holder then publicly claimed: "'Due process' and 'judicial process' are not one and the same, particularly when it comes to national security. The Constitution guarantees due process, not judicial process." Both of those episodes sparked controversy, because of how radical of a claim it is (Stephen Colbert brutally mocked Holder's speech: "Due Process just means:  there's a process that you do").

But that's the point: once something is repeated enough by government officials, we become numb to its extremism. Even in the immediate wake of 9/11 -- when national fear and hysteria were intense -- things like the Patriot Act, military commissions, and indefinite detention were viewed as radical departures from American political tradition; now, they just endure and are constantly renewed without notice, because they've just become normalized fixtures of American political life. Here we have the Obama administration asserting what I genuinely believe, without hyperbole, is the most extremist government interpretation of the Bill of Rights I've heard in my lifetime -- that the Fifth Amendment's guarantee that the State cannot deprive you of your life without "due process of law" is fulfilled by completely secret, oversight-free "internal deliberations by the executive branch" -- and it's now barely something anyone (including me) even notices when The New York Times reports it (as the ACLU's Jameel Jaffer asked yesterday: "These Dems who think executive process is due process: Where were they when Bush‬ needed help with warrantless wiretapping?" -- or his indefinite detention scheme?)

A couple of months ago, I spoke at Purdue University in Indiana about civil liberties in the post-9/11 era, and several high school students drove from Kentucky to attend. They were aspiring journalists who worked on their high school newspaper and were battling their county School Board officials who were attempting to censor some of their articles on gay equality; they interviewed me after my speech in the hope that I would provide critical quotes about those officials (which I happily supplied). One of the student-journalists, a girl in the 11th grade, said something to me that was striking, something I knew rationally but had not quite internalized viscerally: she pointed out that much of my speech was grounded in post-9/11 erosions of civil liberties, but that for people her age -- she was 6 years old at the time of the 9/11 attack -- the post-9/11 era is basically all they know.

The post-9/11 era comprises the entirety of their political experience. They have no different American political culture to which they can compare it, at least from personal experience. The post-9/11 U.S. Government is the only one they know. The rights that have been abridged in the name of Terrorism are ones they never experienced, never exercised, and thus do not expect.

Every year that these assaults on core liberties are entrenched and expanded further -- the Firth Amendment guarantee of due process "can be satisfied by internal deliberations in the executive branch" -- the more normalized they become, the more invulnerable to challenge they are, the more unlikely it is that they will ever be reversed. In 2006, Al Gore gave a speech on the Bush/Cheney assault on the Constitution and asked: "If the president has the inherent authority to eavesdrop on American citizens without a warrant, imprison American citizens on his own declaration, kidnap and torture, then what can't he do?" What prompted Gore's denunciation was mere eavesdropping and detention without judicial review. That's no longer controversial. Now we have this question: if the U.S. President can openly declare the power to order even the nation's own citizens executed by the CIA in total secrecy, without charges or a whiff of transparency or oversight, what can't he do?

I was on Democracy Now this morning discussing all of this, as well the rejection by the British High Court this morning of Julian Assange's appeal of his extradition order to Sweden, and will post those segments here when they are available. In the meantime, there are two related articles on all of this worth reading:

Whenever I raise questions about President Obama’s “targeted killing” policy, and the cavalier way his aides dismiss criticism of it, administration officials tell me that I wouldn’t worry so much if I understood the program’s inner workings. But the more that comes to light, the more worried I feel.

He adds that "if Mr. Obama wants to authorize every drone strike, fine—but even the president requires oversight (remember checks and balances?) which he won’t allow." And then the key conclusion:

Apologists for the president’s “just trust me” approach to targeted killings emphasize that the program is highly successful and claim that the drone strikes are extraordinarily precise. John Brennan, the president’s counter-terrorism adviser, said in a recent speech that not a single non-combatant had been killed in a year of drone strikes in Afghanistan and Pakistan. And today’s Times article quoted a senior administration official who said that civilian deaths were in the “single digits.”

But it turns out that even this hey-it’s-better-than-carpet-bombing justification is rather flimsy. The Times article says “Mr. Obama embraced a disputed method for counting civilian casualties …It in effect counts all military-age males in a strike zone as combatants, according to several administration officials, unless there is explicit intelligence posthumously proving them innocent.”

The logic, such as it is, is that people who hang around places where Qaeda operatives hang around must be up to no good. That’s the sort of approach that led to the false imprisonment of thousands of Iraqis, including the ones tortured at Abu Ghraib. Mr. Obama used to denounce that kind of thinking.

That's not only something Mr. Obama used to denounce, but also his Democratic and progressive followers, who are largely -- and disgracefully -- silent about all of this, when they're not cheering it (the very first comment to Rosenthal's post demands that he stop criticizing Obama on the ground that doing so helps Romney).

(2) The Philadelphia Daily News' Will Bunch makes a very provocative though important point about that last passage. As I wrote about yesterday, the most significant new revelation from The New York Times article is that the Obama administration now considers "all military-age males in a strike zone as combatants," on the ground that such individuals "are probably up to no good." As Bunch points out, this was the exact language used by George Zimmerman in his 911 call about Travyon Martin ("it looks like he's up to no good"). Moreover, at exactly the time that President Obama was poignantly observing that Martin looks like a son that Obama might have had, he was classifying all males in the vicinity of suspected Terrorists in Pakistan, Yemen and Somalia -- including teenagers -- as "militants" and "combatants," and deeming them fair game to be killed solely by virtue of their physical location, gender and age. Those are someone's actual sons. Bunch writes: "Since they chanted 'Drill, baby, drill!' at the 2008 RNC, maybe they could chant 'Kill, baby, kill' at the 2012 DNC when they re-nominate President Obama."

UPDATE: Here's the Democracy Now segment I did this morning on Obama's kill list (can also be seen here):

And here's the segment on the ruling in Assange's extradition challenge (can also be seen here):

UPDATE II: The Washington Post today points out the obvious:

Across the vast, rugged terrain of southern Yemen, an escalating campaign of U.S. drone strikes is stirring increasing sympathy for al-Qaeda-linked militants and driving tribesmen to join a network linked to terrorist plots against the United States.

After recent U.S. missile strikes, mostly from unmanned aircraft, the Yemeni government and the United States have reported that the attacks killed only suspected al-Qaeda members. But civilians have also died in the attacks, said tribal leaders, victims’ relatives and human rights activists.

“These attacks are making people say, ‘We believe now that al-Qaeda is on the right side,’ ” said businessman Salim al-Barakani, adding that his two brothers — one a teacher, the other a cellphone repairman — were killed in a U.S. strike in March.

Who would have guessed that continually dropping bombs on a country using remote-controlled sky robots and killing their civilians would breed hatred and a desire to attack back? Not only do these constant Obama attacks extinguish the lives of innocent people, but they also exacerbate the very threat they are ostensibly designed to address.

UPDATE III: Some unknown citizens decided to use the White House petition system today to start a petition asking for the creation of a "Do-Not-Kill" list, "in which American citizens can sign up to avoid being put on the president’s 'kill list' and therefore avoid being executed without indictment, judge, jury, trial or due process of law."