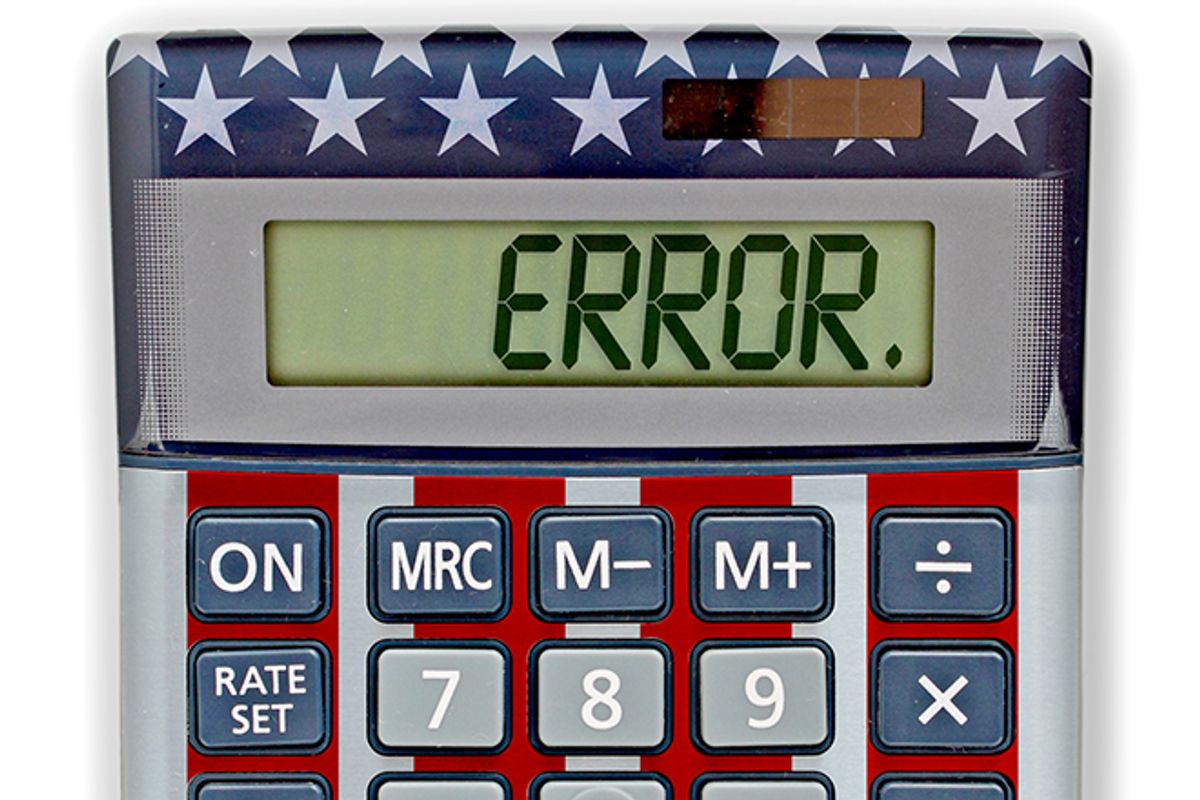 Last summer at a community fundraiser, I was conversing with a man who began to carp about runaway federal government spending. His was a reasonable complaint: Relative to the gross domestic product, both federal spending and the national debt are near historically high levels. When I asked him what types of spending ought to be cut, he mentioned foreign aid. “What share of federal spending do you think goes to foreign aid?” I countered, knowing that the correct answer is just under 1 percent. “Forty-eight percent,” he hazarded as my jaw dropped.

Fast-forward to last week’s Gallup poll revealing that, when asked to estimate the share of their fellow Americans who are gay, 35 percent of respondents answered 25 percent and another 43 percent answered between 10 percent and 25 percent. As the Atlantic’s Garance Franke-Ruta points out, although the Kinsey Report’s most broadly inclusive definition put the figure as high as 10 percent, contemporary studies peg it closer 2 percent. In short, nearly fourth-fifths of the country believes homosexuality is more prevalent – and possibly five times more prevalent — than it in fact is.

The uncomfortable truth is that across a range of issues, many with important policy implications, Americans are simply misinformed, and often wildly so. Presuming citizens form their opinions based upon what they know about society and government, how in the world can even the most earnest politicians respond properly to preferences expressed by such a highly misinformed public?

Now consider the recent Gallup results in terms of their policy or political implications. Some Americans surely object to homosexuality based on religious or moral grounds, and would continue to do so regardless of their perceived size of the gay population. For the rest of America, however, misperceptions could cut either way: On one hand, the overestimates may help same-sex equality advocates because Americans realize that many of their co-workers, neighbors, clients and acquaintances are gay; on the other hand, the resistance to extend rights to any minority groups may grow in some proportion with the perceived size of that group. (Backlash against illegal immigrants, for example, seems to have grown with the rising numbers of immigrants.)

But on most other political questions, a confused public makes life difficult for liberal policymakers. The public grossly misunderstands who owns how much in America and who gets what from the U.S. government in ways that make liberal policy prescriptions harder to sell. Americans drastically underestimate wealth inequality in the country, undermining the case for raising higher-bracket income, inheritance or capital gains tax rates. Like the budgetary-challenged man I met last summer, Americans likewise tend to believe the U.S. government spends more than it actually does on items like foreign aid and welfare to the poor, and less on defense.

Such findings explain the paradoxical public preference for shrinking government spending even though, according to a YouGov/Economist survey last year, a majority of Americans only advocated less spending for one of 14 items polled — that dastardly 1-percenter: foreign aid. And as I’ve written elsewhere, even if the definition of “waste” is subjective, the persistent belief among Americans that half of all U.S. government spending is wasted is difficult to square with reality — especially when, as the YouGov/Economist results show, solid majorities of people want to maintain or even increase spending on Medicare, Medicaid and defense, which alone comprise half of all federal spending.

Meanwhile, to President Obama’s great chagrin and partially resulting from his own communication failures, Americans remain very confused about the provisions of the Affordable Care Act: what it does and doesn’t do, when certain provisions kick in, what the law will cost, and so on. Again, it’s hard to square the circle of a public evenly divided on the legislation overall despite the fact a plurality if not majority of polled respondents support every major provision of ACA except the very unpopular individual mandate. Unless the mandate is so damning in the public’s mind that it ruins an otherwise acceptable bill, one of two things must be true: Either Americans oppose this law despite supporting all but one of its provisions, or they are just so completely in the dark about it they oppose it as a matter of reflex. (If the latter, the burden falls on the Obama administration and other proponents to explain and clarify what the legislation does and doesn’t do.)

As for the 2003 Iraq invasion, the most significant security policy decision since Vietnam? Long after the publication of the 9/11 Commission Report and as late as 2007, more than 40 percent of Americans still believed Saddam Hussein was involved in the Sept. 11 attacks, as did a startling 85 percent of military members fighting on the ground in Iraq. The consequences of that ignorance — 5,000 Americans and tens of thousands of Iraqis dead, and a long-term cost to the U.S. treasury in the trillions — will continue to be felt for decades.

Despite an earnest Google search, I failed to find any comparable examples of political or societal ignorance that favor the left. Perhaps Americans, particularly those who are living in non-border states, underestimate the size of the illegal immigrant population, deflating conservative warnings about the impact they have on the American economy and public security. Momentarily channeling my inner George Will, following the very unpopular Citizens United Supreme Court ruling perhaps citizens harbor exaggerated views of how much money corporations spend, overall or per capita, on political campaigns.

Even if misinformation does not uniformly advantage the right, ignorance has a clear ideological tilt. As the American Prospect’s Paul Waldman has argued, conservatives not only have a vested interest in creating or at least perpetuating falsehoods about government, but they doubly benefit from the fact that many Americans who at some point in their lives relied upon government programs believe they never did.

Given that the public believes they are less dependent on a government that is actually less wasteful than they believe it to be, and that what the public doesn’t know may or may not hurt them, this much is clear: Their ignorance surely makes political life much harder for liberals.