First he didn't "desire" to serve, but didn’t evade it. Then he "longed" to go. The truth: He got four deferments 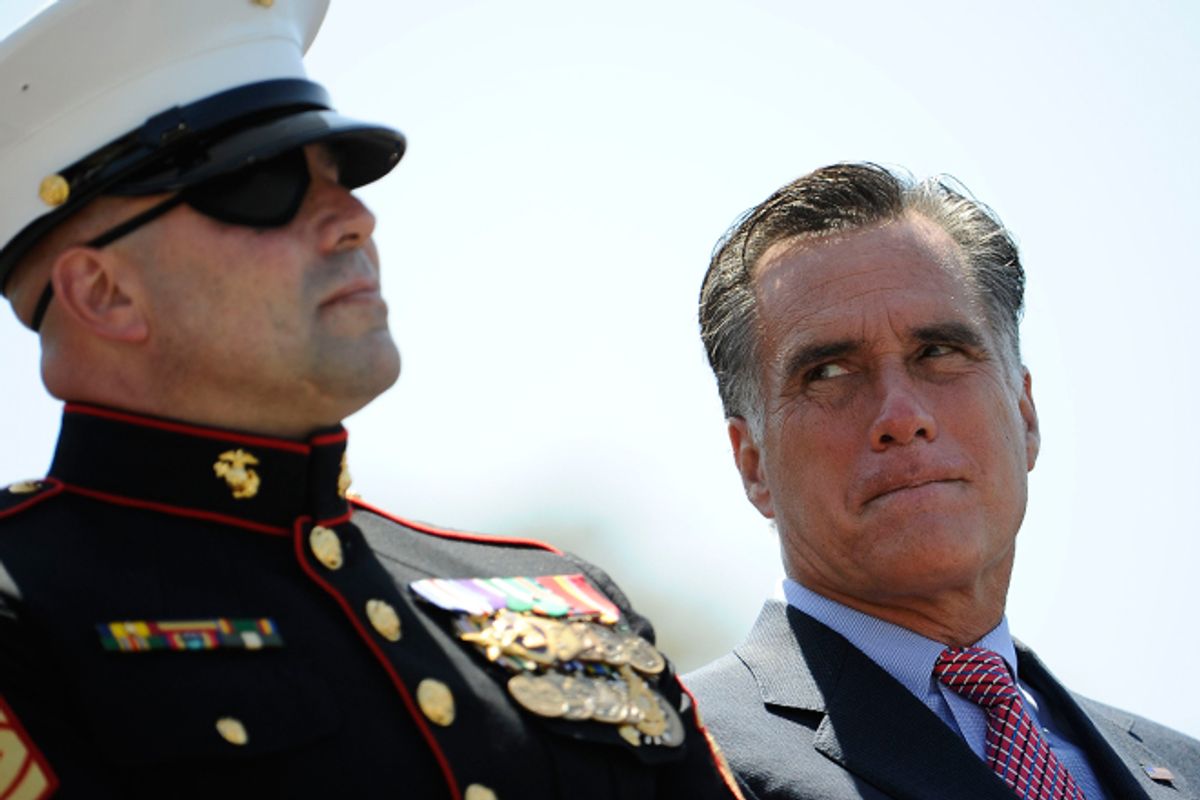 Mitt Romney changed his story on poverty in St. Louis Thursday. Where in February, during the GOP primary, he said "I'm not concerned about the very poor," today he called rising poverty rates "a moral failure" – and blamed it on President Obama. But Romney supports Paul Ryan's budget, which would slash food stamps, Head Start, Medicaid, nutrition programs for pregnant women and their children, and his tax plan would raise taxes on the poor and working class while giving himself an extra $5 million or so. Mitt, you got it right the first time: You're not concerned about the very poor.

But Romney's shifting stories on his Vietnam status could have real political consequences, as an Associated Press expose revealing that he sought and got four deferments from military service during the Vietnam War gets more play. It's not the deferments that will hurt – Dick Cheney got five. It's the fact that over the years, Romney has lied about it.

AP politely says his story has "evolved," but tracks the puzzling changes. Running for president in 2007, Romney told the Boston Globe, "I longed in many respects to actually be in Vietnam and be representing our country there, and in some ways it was frustrating not to feel like I was there as part of the troops that were fighting in Vietnam."

But in 1994, running against Ted Kennedy for his Massachusetts Senate seat while in his "I'm not a typical Republican" phase, he admitted "it was not my desire to go off and serve in Vietnam." Fair enough: His father, George Romney, turned against the war, and so did a lot of Republicans (even if party hawks would later try to hang the "loss" of Vietnam on the antiwar left and their Democratic enablers). Indeed, in 1970, at 23, Romney told the Globe, "If it wasn't a political blunder to move into Vietnam, I don't know what is."

But while telling the truth about his lack of "desire to go off and serve" in 1994, Romney lied again, telling the Boston Herald he didn't "take any actions to remove myself from the pool of young men who were eligible for the draft." That's absolutely not true. He got his first deferment while at Stanford University, where in his prep-school prankster phase he counter-protested a Vietnam draft protest. That's another lie, in a way: While posing as pro-draft and pro-war, he was evading the draft with an "activity in study" deferment. After his freshman year, he got deferment status as "a minister of religion or divinity student," which he'd keep while working in France as a missionary for his Mormon church.

Yet the AP reveals that other young Mormons were denied that deferment. And since the church itself strongly supported the war, its leaders eventually limited such deferments, but Romney kept his.

After his religious deferment, he got another academic deferment to finish school. By the time he was draft eligible, troop numbers were declining, and his lottery number was never called.

As Rachel Maddow noted last night, this story got eclipsed by post-Wisconsin coverage, but Romney's dissembling here, all captured in newspapers in real time, should be a real problem for him. Especially since he's getting the old George W. Bush band back together and backing the Bush-Cheney neocon foreign policy that never saw a war it didn't like.  His campaign refused to comment on the AP story. Let's see if Romney has to answer for his Vietnam deceit in the days to come.

I talked about the story on MSNBC's "Bashir Live" today. As a bonus, you can see me tell Bashir I can't answer a question, when he asks me why veterans are supporting Romney over Obama 66-34 percent. I started to BS, and then decided to keep a promise to myself that I won't make things up when I really don't know the truth. A little cringe-making, but better than faking it.