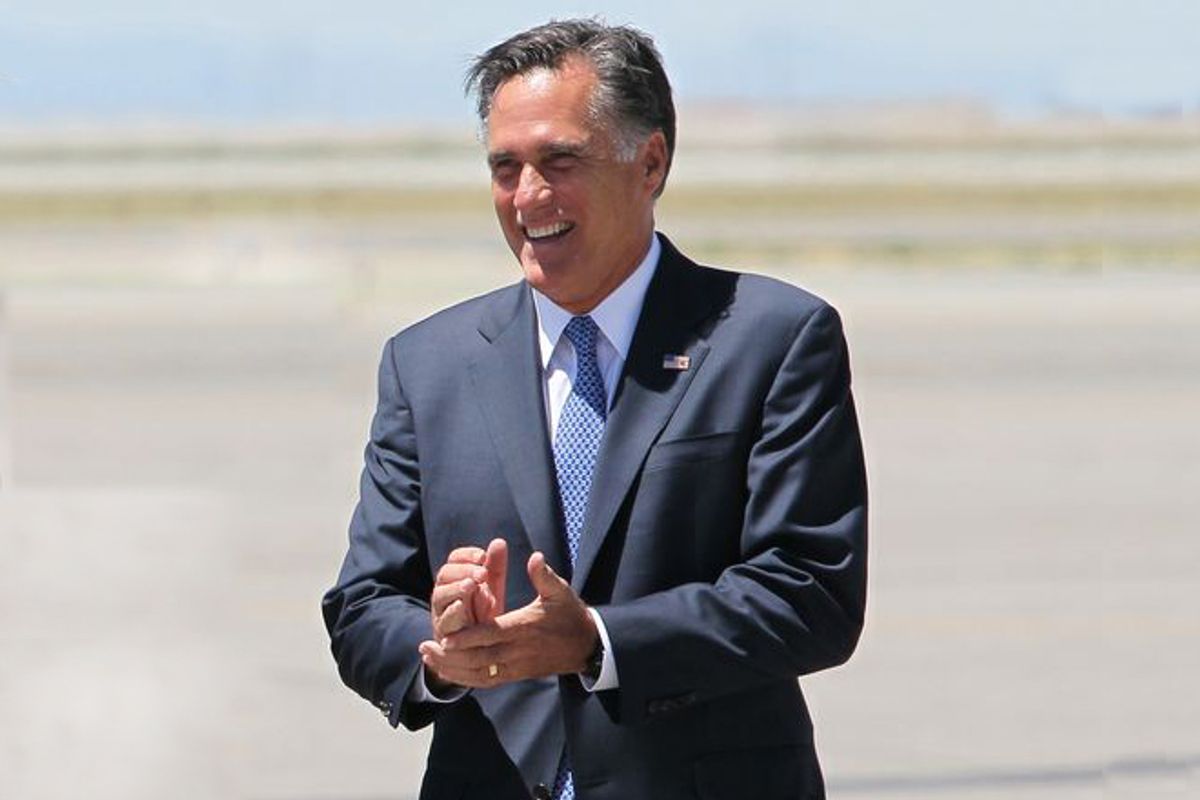 A “Kinsley Gaffe,” named after the journalist Michael Kinsley, occurs when a politician accidentally blurts out what he really believes. Republican presidential candidate Mitt Romney recently committed a classic Kinsley gaffe when he criticized President Obama:  “He wants another stimulus, he wants to hire more government workers. He says we need more firemen, more policemen, more teachers. Did he not get the message of Wisconsin? The American people did. It’s time for us to cut back on government and help the American people.”

Romney blurted out the unstated premise of America’s anti-government conservatism:  Many tasks of government could be performed more cheaply and efficiently by private firms competing in competitive markets.

In some cases that might be true; it is not clear that we need anything like our old-fashioned federal postal service in the age of email and FedEx. For the most part, however, American government at all levels provides two kinds of goods — public goods, which are essential to the private sector but would never be provided efficiently if at all by the private sector, and merit goods, defined as goods that the private sector does produce, but in inadequate quantities or at unaffordable prices, in the judgment of the sovereign people, acting through their elected representatives.

Public goods include military defense, police and emergency services, and essential infrastructure services like streets, water and electricity, and basic R&D. Merit goods are far more controversial than public goods, Romney’s claim that we have too many police officers notwithstanding. Merit goods are goods that our society decides each of its members should have access to as a matter of citizenship, not private personal income or wealth.

The major merit goods that Americans have decided their government should provide are income maintenance, healthcare, education and housing (others include access to cheap credit by small businesses and family farms). These merit goods can be provided either directly by government or indirectly, by means of government subsidies to the private sector, including tax credits, vouchers and subsidized loans. They constitute the universal, middle-class American welfare state, as distinct from means-tested “poor relief.”

At the purely public end of the spectrum are merit goods that are directly provided by government agencies, like public K-12 schools and public colleges and public clinics. In the middle of the spectrum are transfer payments, like income or unemployment insurance, which are collected and distributed by the government but spent mostly on private goods and services. At the other end of the spectrum are specific merit goods like private higher education, housing and most healthcare. Here private purchases of particular kinds of goods are subsidized by the government through subsidized lending (student loans and home loans), tax credits (the tax break for employer-provided health insurance, the home mortgage interest deduction) or vouchers (food stamps for the means-tested poor).

With this in mind, we can understand why the conservative economic agenda is likely to bankrupt America.

Apart from lunatic-fringe libertarians, nobody on the American right proposes to privatize the military or police and fire departments, and conservatives have not had much to say about deregulating electricity and water utilities since that experiment ended badly with Enron.

Nor do conservative politicians, in practice, propose to revive the era of Ebenezer Scrooge and convert what Americans consider to be merit goods like education, health and housing back into private luxuries. Instead, they tend to argue that all merit goods — including K-12 and Social Security -- should be provided by government-subsidized, for-profit corporations. (In theory nonprofit charities could also provide these merit goods, but the right has lost interest in “faith-based” alternatives in recent years, perhaps because there are no guaranteed profits to be made.)

The mainstream conservative argument for privatizing the provision of all merit goods is not moral, but practical. The right claims that merit goods like education, health and housing can be provided more affordably if private providers, motivated by profit, are forced to compete for the patronage of citizens provided by the government with vouchers, in the form of tax credits.

This isn’t wholly wrong. In industries in which there are competitive markets with many producers, subsidizing the private purchase of goods classified as merit goods can increase access to them without affecting prices. Food stamps are one example. In-home services for the elderly, which can be supplied by individuals or small companies in competitive local labor markets, are another. That is why traditional “big government” countries like Sweden and France provide vouchers for in-home private elder-care services, of a kind that my former colleague Lauren Damme and I proposed recently in Democracy Journal, suggesting that Americans consider.

But vouchers can’t work to drive down prices in merit-goods industries with inherent tendencies toward monopoly or oligopoly — whether the monopoly or oligopoly is a result of geography (hospitals, housing), increasing returns to scale (mutual funds in which more investors make possible lower fees or “loads”), or zero-sum prestige (reputable  colleges and universities command more prestige than diploma mills). Unlike firms in a competitive market, monopolies and oligopolies are “price-makers” rather than “price-takers.” They can gouge consumers without fear that competitors will undersell them. And antitrust actions to break up monopolistic firms would merely impair efficiency without creating lasting competitive markets.

If you provide citizens with vouchers to purchase merit goods from a naturally monopolistic or oligopolistic industry, competition will not work to keep prices down.  Instead, the producers are likely to hike their prices, by the amount of the voucher. That is essentially what has happened in higher education, health care and housing in the United States. Contrary to conservative theory, subsidizing the private purchase of these merit goods, without regulating the prices that producers charge, has allowed universities to increase their tuitions and doctors and hospitals to increase their fees without providing more or better health care. And housing as a share of middle-class budgets is higher now than it was in the 1950s and 1960s, defeating the purpose of housing subsidies.

If ever there were a real-world test of competing public policy models, it is found in the realm of merit goods in America. In the last half century, we have not seen out-of-control cost inflation in merit goods that are provided directly by government, like public K-12 schools and direct income maintenance payments to citizens like Social Security and unemployment insurance. Instead, the runaway costs have all come from merit goods like higher ed, health care and housing which follow the conservative model of subsidizing purchases of privately-provided goods.

And this is the failed, out-of-control, overly-expensive model that conservatives want to extend to all middle-class merit goods!

American progressives and centrists are missing a great opportunity to champion real and lasting budgetary savings by proposing the replacement of the unaffordable conservative voucher approach to all merit goods by two cheaper approaches, where competitive markets for merit goods cannot exist:  public provision or utility-style price regulation.

Take higher education. We probably would not have seen the degree of tuition inflation that has occurred if, a generation ago, the federal government had decided to subsidize the expansion of truly public state universities and community colleges. Or for that matter if the federal government had created a National University of the kind that George Washington unsuccessfully proposed. Alternately, the government could subsidize private education but regulate tuitions, the way water and electricity rates are regulated, converting private higher education into a public utility.

Likewise, it would have been far easier to control the cost of public housing for the middle class than to prevent tax expenditures and loans for private middle-class housing from producing cost inflation.

The same is true in the case of healthcare. Apart from minor, non-life-threatening services like dentistry and optometry, there can never be a competitive market in healthcare — there aren’t enough hospitals nearby, consumers can’t judge the quality of the care they are receiving, and deregulation could be catastrophic. If conservatives were serious about saving money, they would favor either a national system of public hospitals — Phil Longman has suggested opening the Veterans Administration hospital system to the public — or reorganizing the U.S. health care system as a privately-owned utility with prices regulated by public “all-payer regulation,” the system used in other industrial countries to keep medical costs under control.

But wouldn’t the quality of service of these public or public-utility alternatives necessarily be much worse than publicly-funded private provision? In the U.S., public hospitals and public clinics are stigmatized by their association with the poor. This creates a “doom loop” of underfunding for public services, because “programs for the poor are poor programs.” But if middle-class voters were provided merit goods by the public, then they would insist that those services be well-funded and efficient. We know this because public K-12 schools in middle-class suburbs, unlike those in inner cities, are generally well-funded, attractive and popular.

It’s not a matter of socialism versus capitalism. It’s a matter of direct government versus indirect government. When it comes to the provision of merit goods, conservatives are just as “socialist” as progressives. They say that they want all Americans to have access to basic merit goods, regardless of their private incomes. But conservatives want “voucher socialism.” Instead of taxing us and then providing us with the goods directly, they want to use disguised taxes, in the form of mandatory individual mandates, like the ones in Romneycare and Obamacare, to fund vouchers used to purchase private products from for-profit providers.

That is the real choice facing Americans. We can save money by providing ourselves with merit goods by direct public provision or public utility price regulation, or we can waste ever more money on public subsidies for predatory for-profit monopolies that provide merit goods like higher education and housing at excessive prices.

In the long run, the choice is clear. America can’t afford conservatism. It costs too much.  Big government is cheaper.