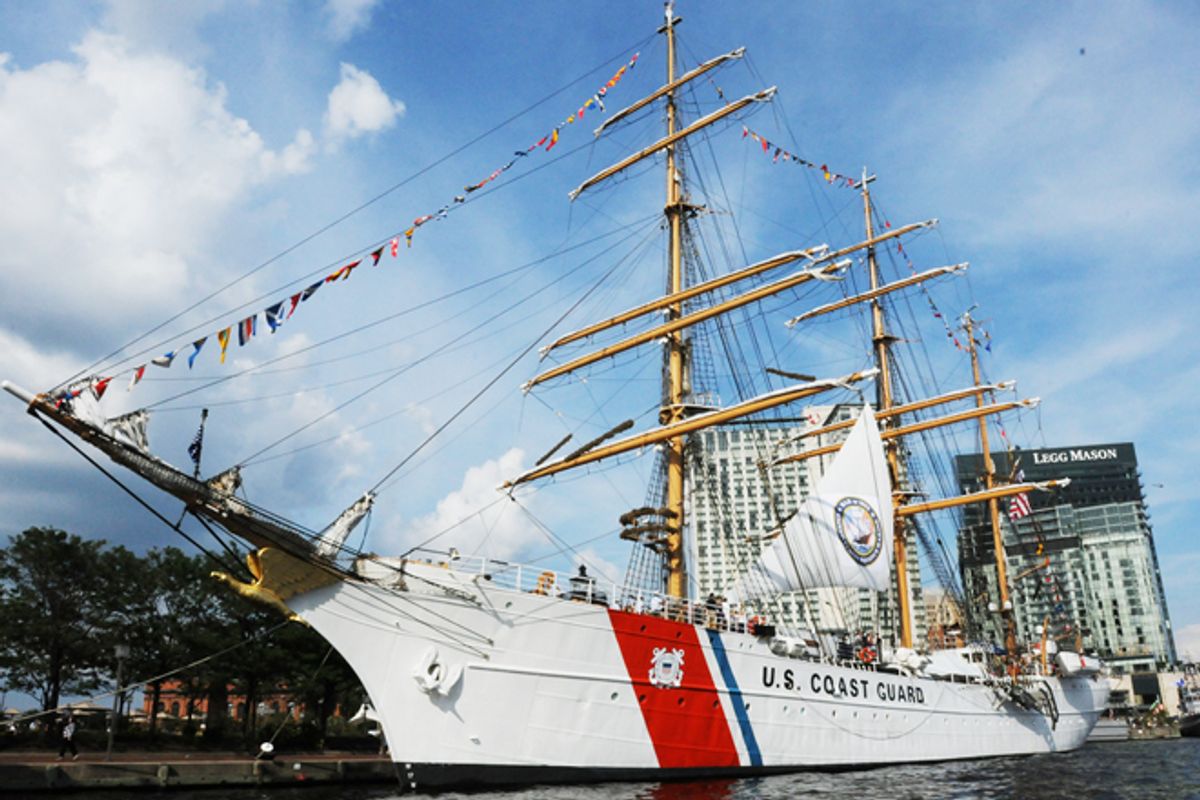 On the 200thanniversary of the War of 1812 Monday, NPR's "Morning Edition" noted that this obscure conflict resulted in the sacking of Washington in 1814, but also gave us the Star Spangled Banner. This reassuring balance of costs and benefits makes for a tidy historical footnote while managing to gloss over the few reasons why the War of 1812 still matters today.

It matters mostly as an occasion for patriotic pomp and circumstance in the mid-Atlantic states and Canada where the war was fought. Maryland has issued a commemorative license plate, complete with bombs bursting in air. Replicas of the tall ships of that era are sailing in Baltimore Harbor. But the war also has some historical relevance. In Foreign Policy, James Traub calls the War of 1812, the "most important war you know nothing about."

The War of 1812 matters because it was America's first war of choice. The United States did not have to declare war on Great Britain on June 18, 1812, to survive as a nation and indeed President James Madison did not want to. The newly founded United States was growing westward but the "war hawks" in Congress pressed for a conflict with America's former colonial masters in the hopes of gaining even more territory to the north. The term "hawk" was coined in the run-up to the War of 1812 and the hawks of U.S. foreign policy have been with us ever since.

The War of 1812 was America's first neocon war. With an audacity that would become familiar, the war hawks appealed to a combination of personal pride — the British navy was forcibly conscripting Americans — and the prospect of material gain — the absorption of British Canada — wrapped up in love of country. No one said the conquest of Canada would be a "cakewalk," but the hawks were confident the Americans would be greeted as liberators.

Like future neoconservative wars, the War of 1812 did not go so well. Neither the citizenry nor the army was quite as ready as the hawks imagined. The Americans did destroy Indian tribes that had allied with the British but they underestimated the Canadians. U.S. forces attacking Canada were repeatedly repulsed in 1812-1814, giving the Canadians a quiet superiority complex that they have not entirely lost to this day.

While some U.S. naval commanders scored audacious victories, the U.S. government could do nothing to prevent the powerful and well-provisioned fleet of the British navy from roaming the Eastern Seaboard, plundering at will. Not for the last time, the hawks had maneuvered the country into disastrous circumstances.

In August 1814, the British advanced on Washington, determined to teach the upstart Americans a lesson about who was the world's only superpower. Francis Scott Key, an attorney and amateur poet, joined the troops that massed in Bladensburg, Md., to stop the British advance. The British invasion was especially unnerving to slave owners like Key because the British were offering freedom to African-Americans who joined their side. Thousands of slaves in southern Maryland walked away from their owners in order to gain their freedom. Some black men asked for duty on the front lines so that they might get an early opportunity to plug a slave master with hot lead.

The War of 1812 matters today because it was the first war in which America's hawks got their asses whipped. The British routed the numerically superior American force at Bladensburg and the U.S. troops fled in fear, an epic retreat that was soon dubbed "the Bladensburg Races" by the Jon Stewarts of the day. The British proceeded to burn down the White House, the Congress and the Library of Congress, making it the single worst day in American history until Sept. 11, 2001. Showing a distinct lack of spine, Key cowered in his Georgetown house for several days.

Yet the War of 1812 also gave us the template of how hawks recover from their debacles — with the invocation of idealistic patriotism. It happened when the British moved on to Baltimore with hopes of plundering the city as they had done Washington. Key followed them, seeking to obtain the release of a friend who had been detained by the British troops. Through the night of Sept. 14, 1814, Key witnessed the British bombardment of Fort McHenry at the mouth of Baltimore Harbor. In the morning, a gigantic American flag was still hanging on the ramparts. The Americans had not been defeated, and the British decided to move on. Key decided to write a song to celebrate, fitting his lyrics to the melody of a popular English drinking club song.

While the tune is difficult to sing, Key’s words infused the music with bold images and a hopeful spirit that is quintessentially American: O say, can you see, by the dawn’s early light/What so proudly we hailed at the twilight’s last gleaming? At end of the first stanza, he asked another question. O say does that star spangled banner yet wave/O’er the land of the free, and the home of the brave?

In the modern mind, that is where the song ends and the ballgame begins.

But for Key, that question — does the banner still wave? -- was just the prelude to three more  stanzas that seek to explain why the American flag should still wave. These stanzas, taught in American public schools for much of the 19th and 20th centuries, have been largely forgotten. In them, the  flag not only survives but goes on to greater glory, at least as it was imagined at the time.

In the third verse Key scorned the African-Americans who dared to join the British cause to escape bondage. He took the artistic liberty of transforming the ignominy of the Bladensburg Races into an American victory.

And where is that band who so vauntingly swore
That the havoc of war and the battle's confusion,
A home and a country should leave us no more!
Their blood has washed out their foul footsteps' pollution.
No refuge could save the hireling and slave
From the terror of flight, or the gloom of the grave:
And the star-spangled banner in triumph doth wave
O'er the land of the free and the home of the brave!

Key's lyrics flattered Americans by suggesting the U.S. troops had expelled the British mercenaries and the freed slaves from American soil. In fact, the British left Baltimore and Washington on their own accord and faced no American resistance. And the vast majority of the African-Americans who joined the British forces neither fled in terror nor went to the grave. Some 3,000 of them gained their freedom and settled in Novia Scotia or the Caribbean. (This verse is one reason why African-Americans long resisted the adoption of Key's song as the national anthem.)

In Key’s forgotten fourth stanza, the defensive hopes of the first stanza swell into a celebration of just war that envisions America going from near-defeat to a godly victory:

Oh! thus be it ever, when freemen shall stand
Between their loved home and the war's desolation!
Blest with victory and peace, may the heav'n rescued land
Praise the Power that hath made and preserved us a nation.
Then conquer we must, when our cause it is just,
And this be our motto: "In God is our trust."
And the star-spangled banner in triumph shall wave
O'er the land of the free and the home of the brave!

It was the totality of the song, not just the first verse, that made Key's Banner popular at the time. The singing of the song spread as the war with Great Britain came to a close. On the battlefields of Europe, the British had largely defeated their principal enemy, France, and no longer needed to worry about the United States. In December 1814, Great Britain and the United States negotiated a peace treaty. If the United States had not won the War of 1812, it had not lost it either. For the war hawks and a grateful and relieved nation, that was enough.  The "Star Spangled Banner" transformed the mediocre results of the war into a national triumph.

Survival was all America needed after 1814, Traub notes.

Only with the war's end could rival political parties form around differing visions of the country's own future: a strong versus a weak central government; a manufacturing versus an agrarian economy; and, ultimately, a nation of freemen versus one of owners and slaves. America was now free to fulfill its territorial, economic, demographic, and -- for better and worse -- political destiny.

The Star Spangled Banner expressed that sense of destiny. In 288 words Key captured and defined something exceptional and enduring in America’s love of nation. His song summoned the “Heaven-rescued land” into righteous action — conquer we must when our cause it is just. This spirit would animate the idea of America's Manifest Destiny as a global power for the next two centuries.

Yet we no longer teach our schoolchildren the national anthem as it was sung during the War of 1812 and for good reason. The spirit of American exceptionalism is strong, but scorning American blacks for seeking their freedom is no longer respectable, and advocating conquest in the name of God is not far behind. Two hundred years later, Francis Scott Key's rhetoric is out of step with modern ideals, a reminder that a dominant strain of American patriotism was born in the War of 1812, the offspring of military adventurism and racial posturing that we choose to forget.