Girls would love science, if it was more like Katy Perry

OMG, girls! Astrophysics is so glittery! A European initiative to get young women into science insults them instead 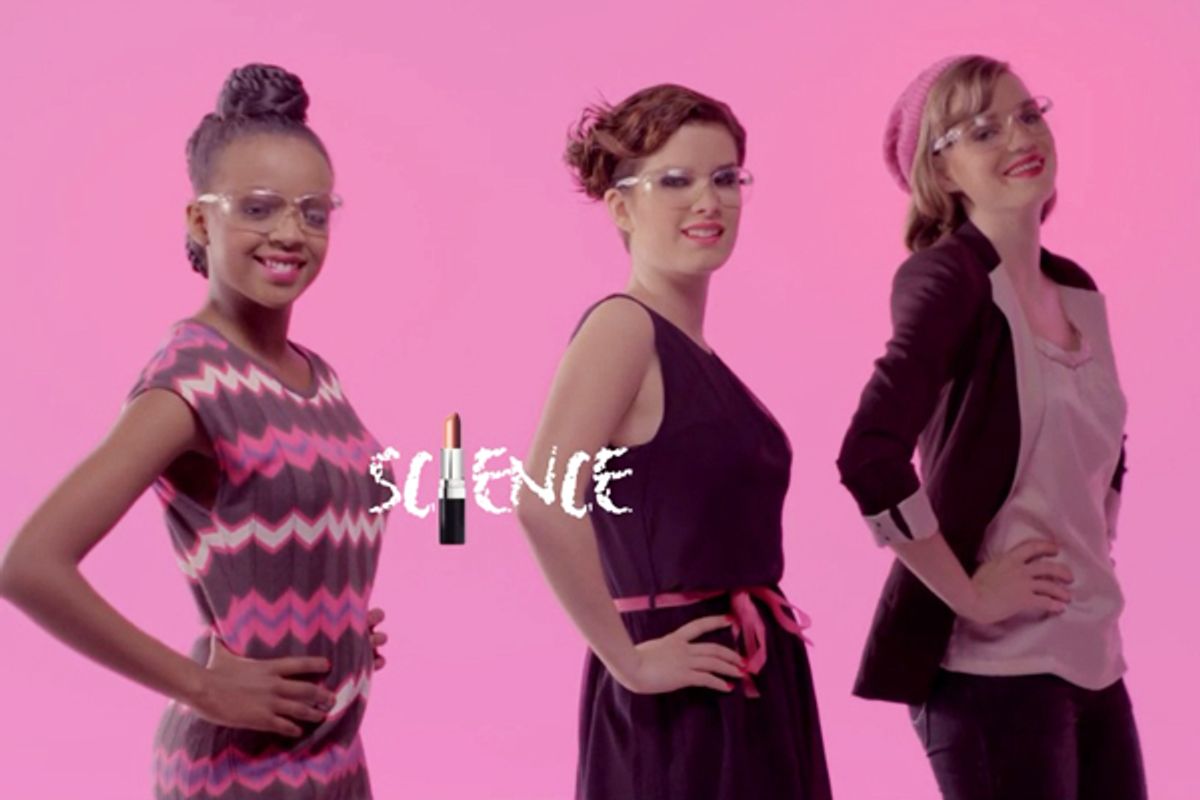 This is what a colossally misguided stab at empowerment looks like. In an attempt to persuade girls to pursue educations and careers in science, the European Commission this week decided to trick ladies' fluffy little brains into believing that stuff like astrophysics and nanotechnology are like, the funnest. Yes, do go on about how glamorous and pretty science is, because if chicks can't equate veterinary virology with dresses and manicures, they're just not going for it.

Perhaps the most positive thing about the campaign so far has been the swift and vocal outcry against it. The yay-science! clip features a trio of high-heeled, miniskirted sirens against a pink backdrop, smiling and laughing and tilting their heads adorably to images of test tubes and makeup brushes. The slogan? "Science: It's a Girl Thing!" The letter I in "science," by the way, is a tube of lipstick. Please, watch and enjoy. These women look so giddy, they belong in a tampon commercial.

By way of justification, Máire Geoghegan-Quinn of the European Commission explained that the campaign was trying to "overturn clichés and show women and girls (and boys too!) that science is not about old men in white coats." And spokesman Michael Jennings added that the clip was "intended to catch the attention of the target audience – 13-to-17-year-old girls," in a "fun, catchy" attempt to "speak their language to get their attention." OMG girl language is SPARKLY.

Surprisingly, when the clip got passed around, some real men and women took issue with educational encouragement that looks like a Katy Perry video. Nature editor Helen Pearson called it "packed with painful patronizing cliché," while Victoria Herridge, a paleontologist at Britain's Natural History Museum, declared it "beyond parody… all the things we worry about with gender stereotyping and body image these days." Meanwhile, speaking for the entire human race, University College London social psychologist Petra Boynton succinctly asked, "For the love of all things holy, what is this crap?" And, significantly, Curt Rice, vice president for research and development at the University of Tromsø, revealed via Twitter that "I was on the 'expert panel' for this campaign, and our advice was 100% ignored!…I could see it coming when we gender experts met with the advertisers. They couldn't cope with our stuff at all. Frustrating!" It didn't take long for #sciencegirlthing to become not just a trending topic but a furious response to an absurd, insulting sexualization of women's scientific achievement and ambition. And magically, quietly, the video disappeared from the campaign's YouTube and home pages.

If there's any good to come out of this epic stupidity, it's that it may spur meaningful conversation about the contributions that women make to science, and about the need to educate and motivate girls. It'd be great if people who first heard about the campaign via this inane clip stuck around to see its profiles of real women in science, who are infinitely more inspiring than the hot, beaker-brandishing babes of the video. It'd also be OK if the commission took the damn lipstick out of the word "science," and didn't feel the need to put little hearts around its explanation of "Why you'll LOVE science."

The problem with these frou-frou attempts to coax females into traditionally male-dominated fields is that they assume the main barrier to entry is that girls think they're icky. It's a trope perpetuated down to the clothes on our daughters' backs, riddled with messages that girls are "allergic to algebra," "too pretty to do homework" and "pretty like mommy" -- while boys are "smart like dad." It's there when Lego rolls out beauty-parlor themed toys. It's there when the New York Times declares, uncontested, that "MEN invented the Internet." It's there when Oscar- and Emmy-winning writers dismiss female journalists as "Internet girl" and insist, "Let me manhandle you."

If you really want to face, head on, the obstacles that females face in any number of professions, then you need to stop acting like the problem is that girls just need everything fed to them on a glitter-daubed pink spoon. You need to acknowledge the blazing, often dangerous sexism they encounter when they venture into the macho realms of video games or sports or technology or the military. You need to grasp that the barrier here isn't that they're afraid of chipping their manicures. And you could understand that if you want to help girls bloom, you could start by not insulting their intelligence.