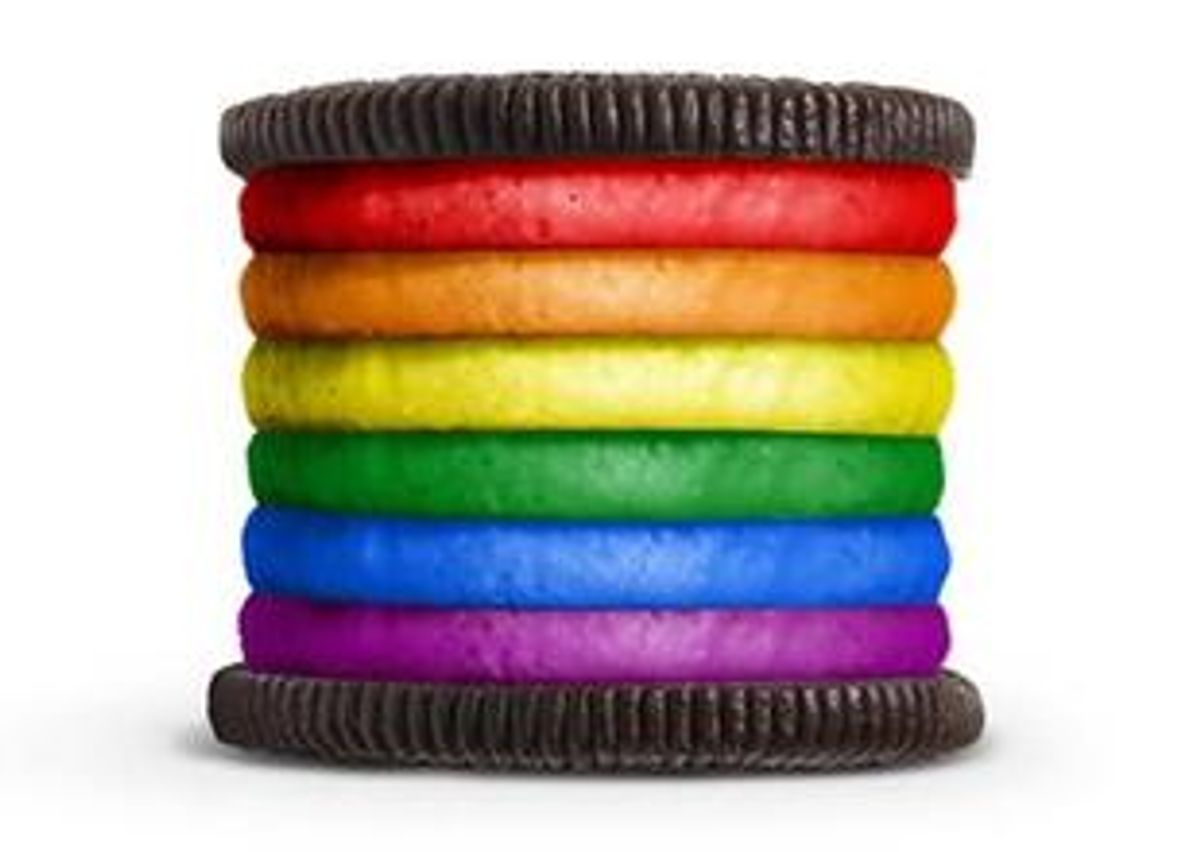 By now everyone has seen the rainbow-filled Oreo that the cookie company mocked up for Pride month. It was the Picture That Launched a Thousand Facebook Comments (actually 54,000, as of this writing), a large number of them hateful. But for all the homophobic insults and calls for an Oreo boycott, Oreo has seen no credible threat to its business. In fact, many LGBTQ rights supporters are more likely than ever to go out and buy a box of the cream-filled cookies, both to spite the haters and support a company that appears to have bravely taken a stand for gay rights.

In reality, Oreo’s move wasn’t all that brave. You can be sure that Oreo, which is made by Nabisco, which in turn is owned by mega food corporation Kraft, knew exactly what it was getting into. Kraft knew it would rile some homophobes’ feathers but that the majority of Americans who now support same-sex marriage would hold more weight.

Indeed, as ThinkProgress’ Zack Ford points out, there has been no significant, organized effort to boycott Oreo or its parent companies -- just a lot of incoherent threats and one Facebook group that appears to have been taken down.

Kraft knew things would turn out this way because its move has plenty of precedent. Over the past few years numerous corporations have issued public statements in support of gay rights, with no major damage to their bottom lines. Starbucks, Nike and Amazon -- companies not exactly known for their dedication to social justice -- all went in for marriage equality this year.

And then there’s JC Penney, which earlier this year came under fire from anti-gay group One Million Moms for hiring Ellen Degeneres as a spokesperson. Rather than back down amid the criticism, JC Penney stood by its decision, and a few months later, to further crystallize its stance, put out a few ads featuring same-sex parents.

In each of these cases, the companies calculated the risks of making a pro-gay rights proclamation and determined that doing so would be in their best interest. Frankly, gay rights is good business. The Washington Post’s Dan Zak reports:

The risk-reward equation for corporate advocacy has changed over time, says Bob Witeck, president of the District-based Witeck Communications, which specializes in the gay and lesbian consumer markets.

What’s the worst thing that could happen to Kraft? A denouncement from a special-interest group like One Million Moms....

An army of people sends your product around the Internet, and your century-old brand suddenly seems cutting-edge.

Indeed, Oreo’s “gay cookie” stunt got a lot of people who might not ordinarily be inclined to shill for one of the largest food corporations in the world to declare its love for Kraft products all over social media.

Capitalistic motivations aside, it is good news that Oreo put out that rainbow cookie image; it reinforces the fact that LGBTQ acceptance is now something close to mainstream. And it shows what little tolerance our society now has for outright bigotry.

This is a lesson the Salvation Army is learning, rather painfully, this summer. The international charity made waves earlier this month when one of its employees, Major Andrew Craibe, went on an Australian radio show and was questioned by one of the show’s gay hosts, Serena Ryan:

Ryan: According to the Salvation Army, [gay people] deserve death. How do you respond to that, as part of your doctrine?

Craibe: Well, that’s a part of our belief system.

Ryan: So we should die.

Craibe: You know, we have an alignment to the Scriptures, but that’s our belief.

The Salvation Army has long been the target of LGBTQ rights groups for its anti-gay policies and lobbying efforts. (The group professes that homosexuality is a sin forbidden by the Bible and has been accused of denying services to LGBTQ individuals and pressuring clients to renounce homosexuality.)

In the past, efforts to draw attention to the charity’s policies have not reached a particularly mainstream audience. But now, Craibe’s inference that gay people deserve to die has blown up all over the media. It’s bringing a ton of attention to the policies that the Salvation Army is perhaps less open about these days, given the shift in attitudes about LGBTQ rights in the U.S.

The Salvation Army may not be a corporation like Nike or Kraft, but it is a major international charity, and charities are big business these days. There’s no question that the group is motivated at least in part by improving its bottom line (i.e., maximizing donations).

Indeed, it certainly seems that the group is now trying to backtrack. The organization has apologized "to all members of the GLBT community and to all our clients, employees, volunteers and those who are part of our faith communities for the offense caused by this miscommunication” and said that it wishes to build "a more healthy relationship with the GLBT community” -- something it seems unlikely to do as long as it continues to declare homosexuality a sin.

In other words, the Salvation Army is learning the lesson that Kraft obviously already knows: the tide is turning, and you have to turn with it to keep making a buck.

Lauren Kelley is the activism and gender editor at AlterNet and a freelance journalist based in New York City. Her work has appeared in Salon, Time Out New York, the L Magazine, and other publications. Follow her on Twitter.