Mitt Romney has even more positions on abortion than you think

Romney has reversed his old pro-choice positions, but now he can't decide how far to take his newfound extremism 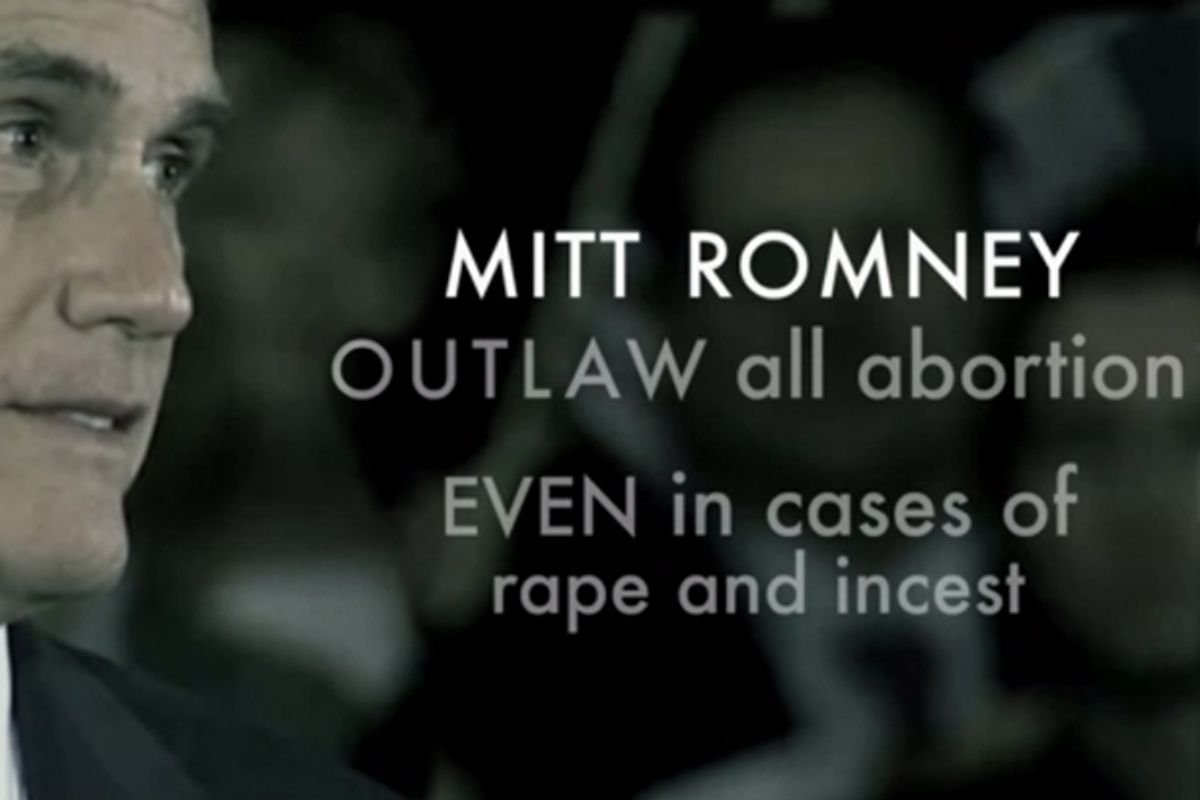 “I'm not sure who that young guy was at the beginning of that film, but I can tell you this, which is, I don't know how many times I can tell it. I was wrong. All right. I was effectively pro-choice when I ran for office.” That was Mitt Romney in a 2007 CNN debate that recently resurfaced in a new Obama campaign attack ad released this weekend.

When it comes to abortion rights, much has been made of the dissonance between the old Mitt Romney and the new Mitt Romney – the "young guy" that Romney was referring to was the one who ran for office in Massachusetts. Yet, as shown by the portion of the debate that the Obama campaign used and the rhetoric of the Mitt Romney running for office today, it’s even more complicated than that. Mitt Romney, in fact, has taken multiple and internally conflicting positions on abortion rights within the past four years – both in this campaign cycle and the 2008 one.

The 30-second Obama ad titled “Troubled” has a female narrator saying, “Every woman who believes decisions about our bodies and our health care should be our own is troubled Mitt Romney supports overturning Roe v. Wade. Romney backed a law that outlaws all abortions, even in cases of rape and incest.”

In its headline, Fox News reports that the Romney campaign says the ad is false, pointing to, by way of evidence, the National Review op-ed Romney published last year entitled “My Pro-Life Pledge.” In the op-ed, Romney explains why he wouldn’t sign the Susan B. Anthony pledge, in part because it failed to include exceptions for rape, incest or to save the life of the mother.

But Romney has hardly stuck to that principle. Let's look at the portion of the 2007 debate that the Obama campaign refers to in its ad. The question was, “If, hypothetically, Roe v. Wade was overturned, and the Congress passed a federal ban on all abortions, and it came to your desk, would you sign it?” Giuliani said he wouldn’t sign it because he would leave it up to the states.

Romney, of course, wasn’t nearly so straightforward. First, he repeated his opposition to Roe, and then he said, “I would welcome a circumstance where there was such a consensus in this country that we said, we don't want to have abortion in this country at all, period. That would be wonderful. I'd be delighted.”

Pressed by Anderson Cooper to actually answer the question, Romney said, “Let me say it. I'd be delighted to sign that bill. But that's not where we are. That's not where America is today. Where America is is ready to overturn Roe v. Wade and return to the states that authority. But if the Congress got there, we had that kind of consensus in that country, terrific.”

But Romney also told Mike Huckabee that he would support a constitutional amendment saying life begins at conception, which pro-choicers took to mean he was endorsing Huckabee’s pet Personhood cause, but which the Personhood people themselves were wary of taking as a full endorsement.

In other words, he’s for states’ rights with regards to abortion, unless he isn’t. He’s for rape, incest and health exceptions, unless he’s not. (Such exceptions make no sense on their own terms – is it not murder if the woman didn’t choose to have sex? – but also happen to be a rough approximation of squishy American public opinion on abortion, loosely supporting certain restrictions while also opposing an outright ban.)

Though focusing on rape, incest and health exceptions isn’t particularly pro-choice either (it’s none of our business why a woman wants an abortion), these are not academic questions. Several U.S. states have passed bans on abortions after 20 weeks with no exceptions, in blatant violation of the Roe standard, and certain House Republicans have tried to get the same passed in the District of Columbia. They’re spoiling for a Supreme Court fight – one that will likely be decided by justices appointed by the next president.

By the way, there was another question in that 2007 CNN/YouTube debate that Mitt Romney, probably to his great relief, didn’t have to answer. (Ron Paul and Fred Thompson were saddled with it instead.) “In the event that abortion becomes illegal and a woman obtains an abortion anyway, what should she be charged with, and what should her punishment be? What about the doctor who performs the abortion?” Maybe it can be asked in the general election debates. We’ll see which Mitt Romney answers then.