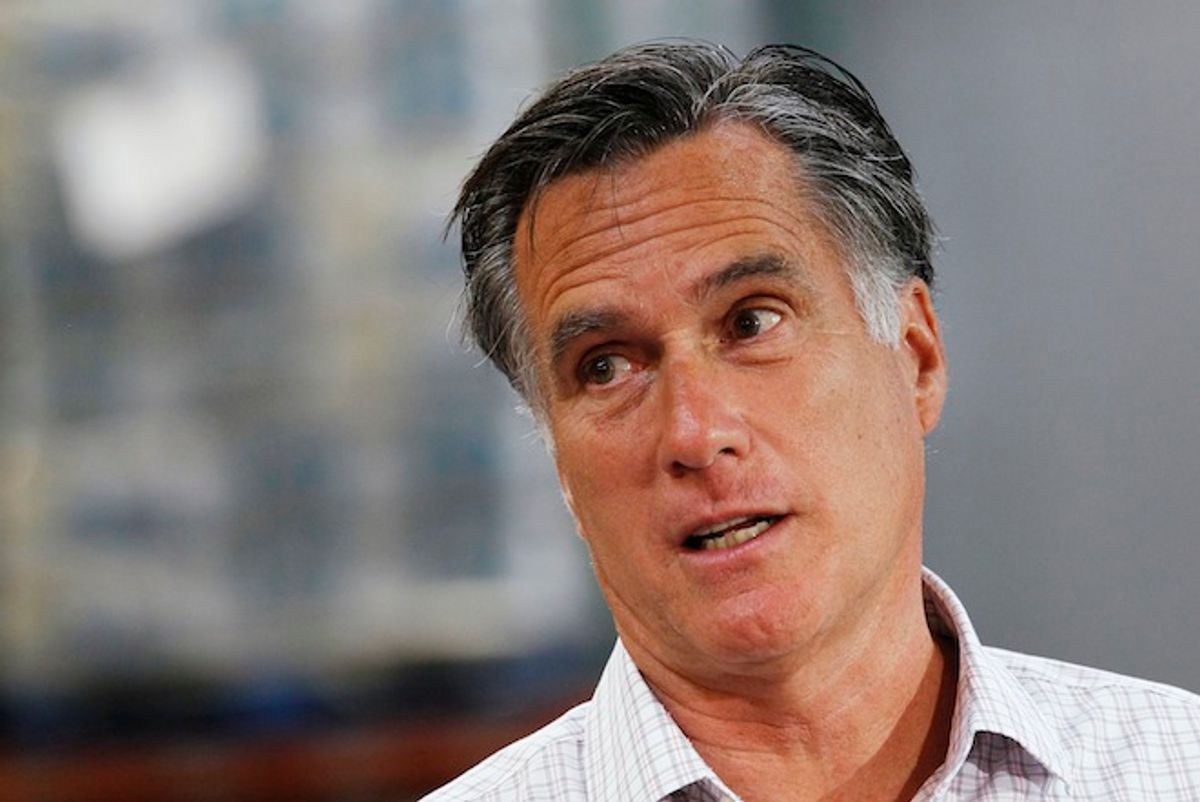 His opponents and the press are turning up the heat and even one of his big-name supporters has publicly called on him to give in, but Mitt Romney is adamantly refusing to release new information about his taxes.

If this story line sounds familiar, it should: Romney was in a very similar spot six months ago, and it didn’t take him long to fold.

It was back in January that Romney tried to duck calls to release tax records, believing he could run out the clock at least until he’d secured the Republican nomination. But his personal finances were becoming an issue, with Newt Gingrich and Rick Perry depicting him as a “vulture capitalist” and stoking resentment among working-class Republicans, and his opponents suggested that Romney might be concealing embarrassing and politically damaging information.

“Listen,” Perry said in a debate just before the South Carolina primary, “here’s the real issue for us as Republicans: We cannot fire our nominee in September. We need to know now."

Perry didn’t survive South Carolina, but when Romney was trounced by Gingrich, the pressure to release his taxes grew. In a debate, Romney was confronted with the example of his own father, who had released 12 years of returns in the run-up to his own 1968 presidential bid, explaining at the time that “one year could be a fluke.” Asked if he’d follow his father’s lead, Romney was evasive, prompting loud jeers and taunts from the live audience. The tax story was taking on a life of its own; even Chris Christie, one of Romney’s top primary season supporters, piped up to say that the candidate should produce his returns.

Finally, a week before Florida’s Jan. 31 primary, Romney gave in, releasing his 2010 returns and an estimate for 2011. It wasn’t nearly as comprehensive as what his father did, but it was something – and it became readily apparent why he’d been so reluctant. Among other things, the records showed that Romney had made $45 million in income over the past two years, even though he wasn’t actually working, and that his effective tax rate for 2010 had been just 13.9 percent. Investments in Swiss bank accounts and offshore holdings in the Cayman Islands and Bermuda were also revealed.

There was also the matter of speaking fees. Before releasing his returns, Romney had hinted that he paid a low effective tax rate, explaining that most of his income over the last 10 years had come from investments (which are subject to a 15 percent tax rate) and noting that “I get speakers fees from time to time, but not very much." But it turned out he’d actually taken in $347,327.62 in speaking money from February 2010 to February 2011 alone, making the episode another “wealth gaffe” for Romney.

This wasn’t enough to stop Romney from winning his party’s nomination. His main competition came from Gingrich and Rick Santorum, so it would have taken a lot more to sink him. But it suggests a similar cave-in may be just around the corner now, with Romney’s taxes once again becoming a major issue.

The impetus this time is a series of media reports examining Romney’s complicated personal finances and raising questions about how much money he has parked offshore, and why. The Obama campaign has taken the new reporting and run with it, demanding that Romney release multiple years of tax records (and taunting him with the example of his own father). The official Romney line, of course, is that there’s nothing to see here and that he’s already provided ample disclosure, but not every Republican is reading from the same script. On Sunday, for instance, Haley Barbour said he’d release more information if he were in Romney’s shoes.

It’s hard to believe there’s anything in Romney’s tax history as sinister as some Democrats are suggesting. But it’s also hard to believe that if Romney were to release records for more years they wouldn’t feature the same sort of embarrassing revelations found in his 2010 return. Obviously, this is something his campaign would like to avoid. But as the story of Romney’s refusal gains traction, the Romney team may be faced with a new calculation: Is there more harm in looking like you’re hiding something than in just putting the information out there, suffering through a news cycle or two, and moving on?